Small Town Living vs. Life in A Large City: The Real Pros and Cons

It’s thought that the important thing is not where a person lives and the most essential thing to be happy is that a person lives with whom. Children’s characters are affected by their surroundings not by a city, town, or village. However, it’s clear that people’s life and their characters change according to where they live. So, big city life and small-town life affect people’s life and their differences make differences in people’s life. It can be said these differences between big city life and small-town life in terms of running into familiar people, meeting people who are different from each other, migration and food.

Don't use plagiarized sources. Get your custom essay on
“ Small Town Living vs. Life in A Large City: The Real Pros and Cons ”
Get custom paper
NEW! smart matching with writer

The first difference between small-town life and big city life is that in small-town it is more likely to run into familiar people than in big city. Everyone knows each other in small town. Even when a person has a car accident, the possibility of the other driver is familiar is high.

But, in big cities anyone doesn’t know each other and they don’t need to it. They even don’t know the people who they live in their apartment building. In small-town, people either know each other very well or they are relative, so they keep a good lookout for everyone who lives there. The person who lives in the same town is right for them whatever they do. However, people don’t know lots of people and a person’s problems don’t interest the other people in big cities.

The second between small-town life and big city life is that in big cities is that it more likely to meet people who are different from each other. They have same culture because they believe similar thing. Moreover, they are relative or familiar with each other and their ancestors can be the same people, so their culture is same or similar. In big cities people, on the other hand, have different culture from each other. Having different ancestor and not knowing each other coming from different place are some of reason why people different culture. In small-town people have similar life style because they have no so much to do. Nearly all people do the same thing during a day and it is normal for them. People, in contrast, have different life style in big cities. Every person has different job, task, culture and belief, so their life is affected by them and their lifestyle is change different.

Another difference between small-town life and big city life is that in big cities is that the numbers of people who are immigrating. People generally immigrate to big cities from a small towns. Therefore, finding a job is nearly impossible in small town and business offices which have been opened for years are closed. Nevertheless, big cities have got large job pool and lots of business offices are opened. So, in big cities finding a suitable job for everyone and develop themselves one job they want is easier than in small town. In small town, there aren’t so many vehicles and roads so; it’s easier to reach somewhere. There aren’t traffic problems and wasting of time during the headway. Problems about buildings aren’t seen, for there aren’t so many buildings. However; there are lots of people, vehicle, roads, and traffic lights so there are traffic problems. In big cities, lots of buildings are raised day by day and urban sprawl occurs.

The fourth difference between small-town life and big city life is that in big cities is food. Although small towns usually tend to have the same thing because they grow their food in the same region, these foods are good, for they are grown in natural way. In big cities foods, on the contrary, have a wide variety because of import and drugs which are help foods to grow immediately in every circumstance. Foods which are grown in small city are healthy because they are grown in places where are suitable for them and in natural way, not with drugs. Generally, fast foods and foods which are made by machines aren’t eaten in there. However, in big cities foods are grown by using lots of different techniques and drugs. So, these foods are not only bad but also not healthy.

Small Town Living vs. Life in A Large City: The Real Pros and Cons. (2021, Mar 04). Retrieved from http://studymoose.com/small-town-living-vs-life-in-a-large-city-the-real-pros-and-cons-essay 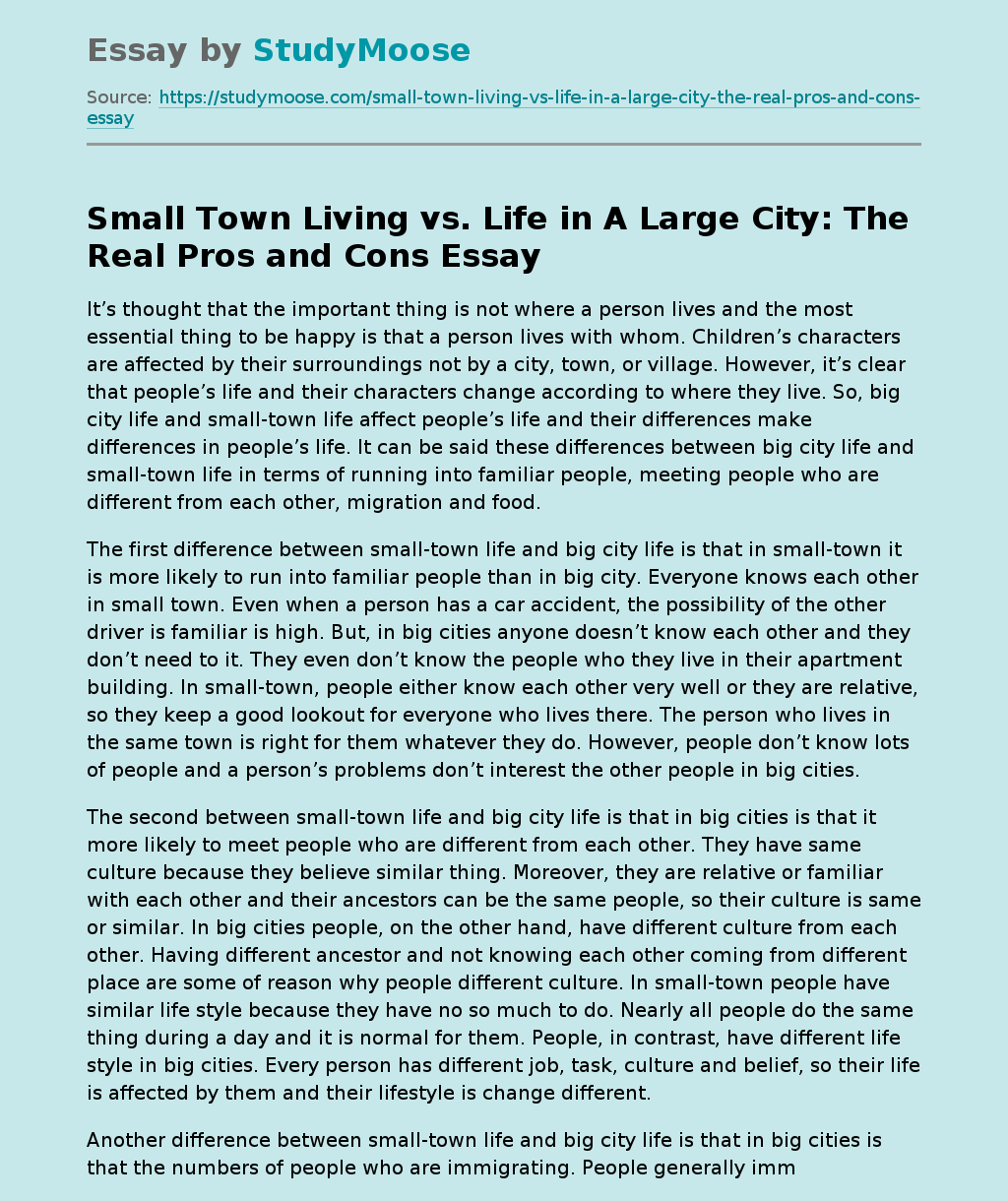