Case Background: Siemen’s Information and Communication Network’s (ICN) Group Strategy Division had been delegated with the task of proposing a strategy for the future of ShareNet. ShareNet, a Knowledge Management System had grown from a small experiment to a tool and was widely used by ICN’s Sales and marketing department (S&M), had been rolled out to R&D department and one of the Siemen’s large U.S. Client.

There had been a meltdown in the telecommunications industry which had precipitated major cutbacks throughout ICN.

Don't use plagiarized sources. Get your custom essay on
“ Siemens ShareNet : Building a Knowledge Network ”
Get custom paper
NEW! smart matching with writer

Group Strategy team faced pressure to cut costs and as a result, ShareNet was likely to come under increasing scrutiny as it been viewed by the upper management as a “ Nice to Have” and not as a “ Mandatory’ tool. There were questions around funding on whether Development and Maintenance of ShareNet be treated as a corporate initiative or the ICN’s five product divisions which use it as a resource should fund for the ongoing development and support.

Case Analysis: The core idea of building ShareNet, a global knowledge network surfaced when an internal ICN consultancy group, Business transformation partners teamed up with a group from Boston consulting group who identified the unique challenge faced by Siemens due to the poor reuse of customer solutions and sharing of best practices which was critical to shift from pure technology products to products with solutions.

ShareNet consisted of knowledge library with information around knowledge objects that are easily retrievable by performing a search and urgent request section wherein urgent questions could be posted for anyone to respond.

Pilot version of ShareNet, which was developed by a web development firm, rolled out to S&M department in few countries was not well received and had to be revamped by ArsDigita.

In order to get the word out, ShareNet consultants were employed to provide support to local country subsidies and interfacing with the ShareNet managers, to promote the system within their region. .Content of ShareNet was controlled through a ‘Global Editor’. Local workshops were also conducted to get the local company on board. These strategies started to pay off as the urgent requests and knowledge objects begun to flow after each country’s workshops.

Siemen’s product divisions and local companies were not charged and head quarters absorbed all the costs which by the end of 2000 were reported to total $7.8 million. Incentive schemes such as Bonus-on-Top which provided incentives for local country managers and rewarded a country’s overall participation in knowledge sharing , ShareNet Shares , a program through which users earned shares which were redeemable for a variety of gifts and bonus pay for ShareNet managers were implemented to motivate ShareNet’s use and adoption.

By the end of 2001, ShareNet had signed up 18,200 users. In July 2002, when Siemens was hit by the meltdown in telecommunications industry, ICN underwent re-organization, resource cut down and group strategy team was tasked with justifying the expenses for ShareNet during which team discussed about the option of charging the ShareNet users a per-user fee to evaluate the value of ShareNet.

As the team was not convinced with the approach of charging the users, they started documenting the impact of ShareNet on ICN’s businesses from which forecast were deduced. Doring, VP of ICN, was confident on overcoming the short term challenges but was more concerned of the scalability of ShareNet

Conclusion: Although, Siemens had an incentive program in place to encourage people’s involvement in ShareNet, it was not well received as none of the Siemen’s employees had redeemed their ShareNet Shares and also, employees used it only when it was helpful for their projects. In order to address this, people’s involvement in ShareNet can be tied to their performance appraisals and also, ShareNet can be extended to other divisions so that there is no restriction on the knowledge housed in ShareNet.

ShareNet should be designed to be business specific so that the knowledge is easily accessible and improves the turn-around time on urgent requests in spite of having it as one big club, which can slow down the access to the knowledge objects. Knowledge Objects should be kept current and up-to-date so that it will be beneficial for the users. Gifts redeemable through ShareNet shares can be re-designed to be more attractive to the employees like participation in international conferences, courses, seminars or promotions etc.

ShareNet Managers will need to closely watch individual’s contribution to encourage and recognize their efforts as it means a lot for giving up individual power for the benefit of the whole organization. People’s involvement can be further boosted through promotions and transfers for their contributions in ShareNet. 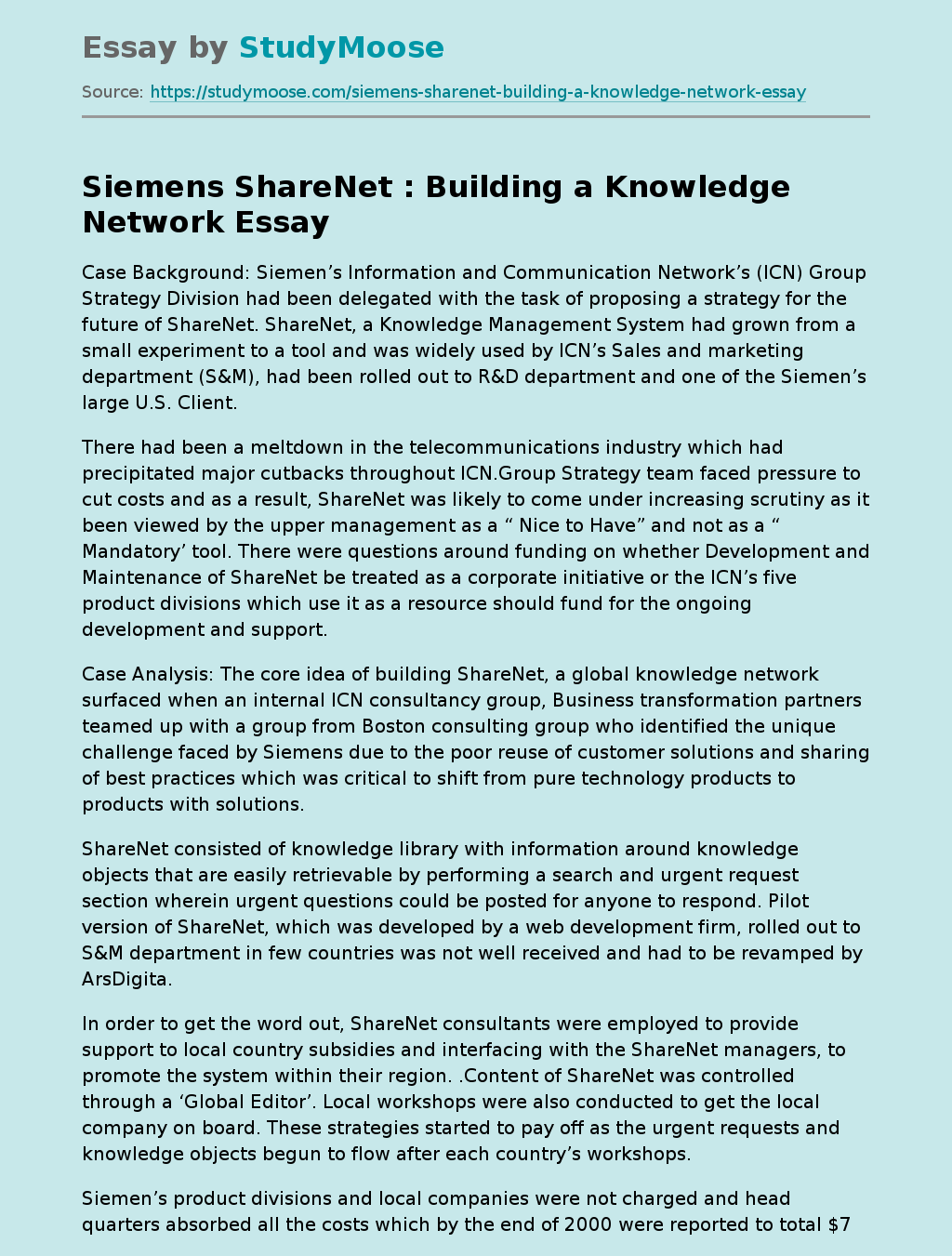