Trust and family relationships are the two main themes in the short story “Crossing” by Mark Slouka. The story tells us about a father, who is going through a tough period, and his relationship to his son. He wants to obtain trust from his son trough a trip in the nature but runs into some challenges on his way. The father in the short story takes his son on a trip to a place at a river, because he wants to get closer to him on this trip.

We get hints throughout the story that the father is going through a tough period after he divorced or separated from his wife. “And he hadn’t been happy in a while.” (5). His mind indicates that he did something wrong in their relationship and that he knows it. “My God, all his other fuckups were just preparation for this.” (135). We can tell that he cares a lot about his son because when he picks him up at his moms’ the text says: “He threw him over his shoulder, careful not to hit his head on the corner of the TV.

” (17-18). He also wants his ex-wife to notice that he is being careful with their son, so she can see that he actually can make something right. “Maybe – maybe he could make this right.” (20). We get a feeling that the father is easy to shatter because when he sees the river he feels a shock, because the river is much bigger and stronger than he remembered it.

He actually considers pulling out. As readers we do not see him as an authority at this point because his anxiety defines him. We do not trust the father’s skills to cross the river with his son on his shoulders, we actually fear both for the son and father. We are not told very much about the son but we get a picture of him being a bit fragile. “He looked over at the miniature jeans, the sweatshirt bunched beneath the seat belt’s strap, the hiking boots dangling off the floor like weights.” (7-8). Maybe he has become fragile and unsecure because of all the mistakes the father has made which has affected the son. The narrator’s technique is to give small hints about something dangerous is going to happen. “The current was stronger.” (105). Now the reader knows that something will happen and that brings the story suspense. The narrator is an omniscient 3rd person who tells the story from the father’s point of view. That makes us feel sympathy for the father. We want him to succeed with his son because we feel sorry for him. The narrator takes us back in time through the father’s thoughts, back to when the father was a kid and when his father took him on the same trip at the same river.

“He remembered the two of them working together quietly, easily, then his father crawling into the tent to lay out the sleeping bags.” (76-77). When the narrator makes these sorts of flashbacks it makes the readers interested in what the river can bring back in the fathers heart. He has obviously had one or more successfully trips with his father, since he wants to do the same thing with his own boy. Maybe it also has something to do with that he wants his son to experience something with him that he cannot experience with his mother. In that way the father could get a better relationship to his son and obtain the missing trust. So the setting in this story is very important because it means something to the father. When the father wants his son to cross the river, he wants to obtain trust from his son and wants to set a good example for his son. When the father starts crossing the river alone he takes it slow and makes sure every step he takes is secure. That could be a symbol of his relationship to his son, and that he has to take it slow to obtain his son’s trust after the divorce or separation.

When he crosses second time with his boy on his shoulders he thinks it is easier, and he cannot understand where that moment of weakness, where he wanted to pull out, came from. “This vision of death like a tunnel at the end of the road and no way to get off or turn around?” (69). His thoughts of death and no way to turn around could symbolize his anxiety of losing his son, but that he have to keep trying to obtain his son’s trust and that he cannot give up. When they have to cross the river again on their way home, the current is stronger and it is harder to cross it. When the father crosses it on himself he slips on a rock but does not fall. Already at this point his plan about a good and trustful relationship to his son is about to crash. When he picks his son up it gets worse and they are in crisis. The father cannot see a way out of this and puts the blame on the divorce. “My God, all his other fuckups were just preparation for this. This wasn’t possible.” (135-136).

This means that he thinks it is impossible to build a great relationship to his son after this divorce and after all the other fuckups he made. He also gets more burdens on his shoulders on his way, which make the cop flow over in the end. We also get a picture for that: “His left arm was a bit tired (…)” (108), “Ignoring the quivering in his shoulder (…)” (131). The story has an open ending. They are in the middle of the river where the father gives up. The burdens become too big, and he is too weak to keep up the fight for his son’s trust. Throughout the story the river is a symbol of the father’s and the son’s relationship to each other and it is a symbol of the father’s emotions. For example when the current gets stronger it is a symbol of the opposition the father meets through the trip. The narrator uses a lot of figurative language in the story, especially comparisons. “Mountains larded with snow like fatty meat.” (4). Slouka does also use other types of figurative language for example: “The grass in the yard beaten flat by the rain.” (14). He gives the grass human qualities in the form of a movement.

All this figurative language makes the story more alive and makes the readers want more. The narrator is showing us the story through the figurative language and through some dialogs in the story. When Slouka is showing us he allows the readers to feel and see the moment and that makes the story more interesting to read. The message of the story is that trust is very important almost a question about life and death. You should think about your actions before you make them, so you do not make several mistakes which you have to make up to again. Then the trust will get harder, even impossible, to obtain because you have made it impossible to trust you. And if people do not trust you; then what is the meaning of living life? 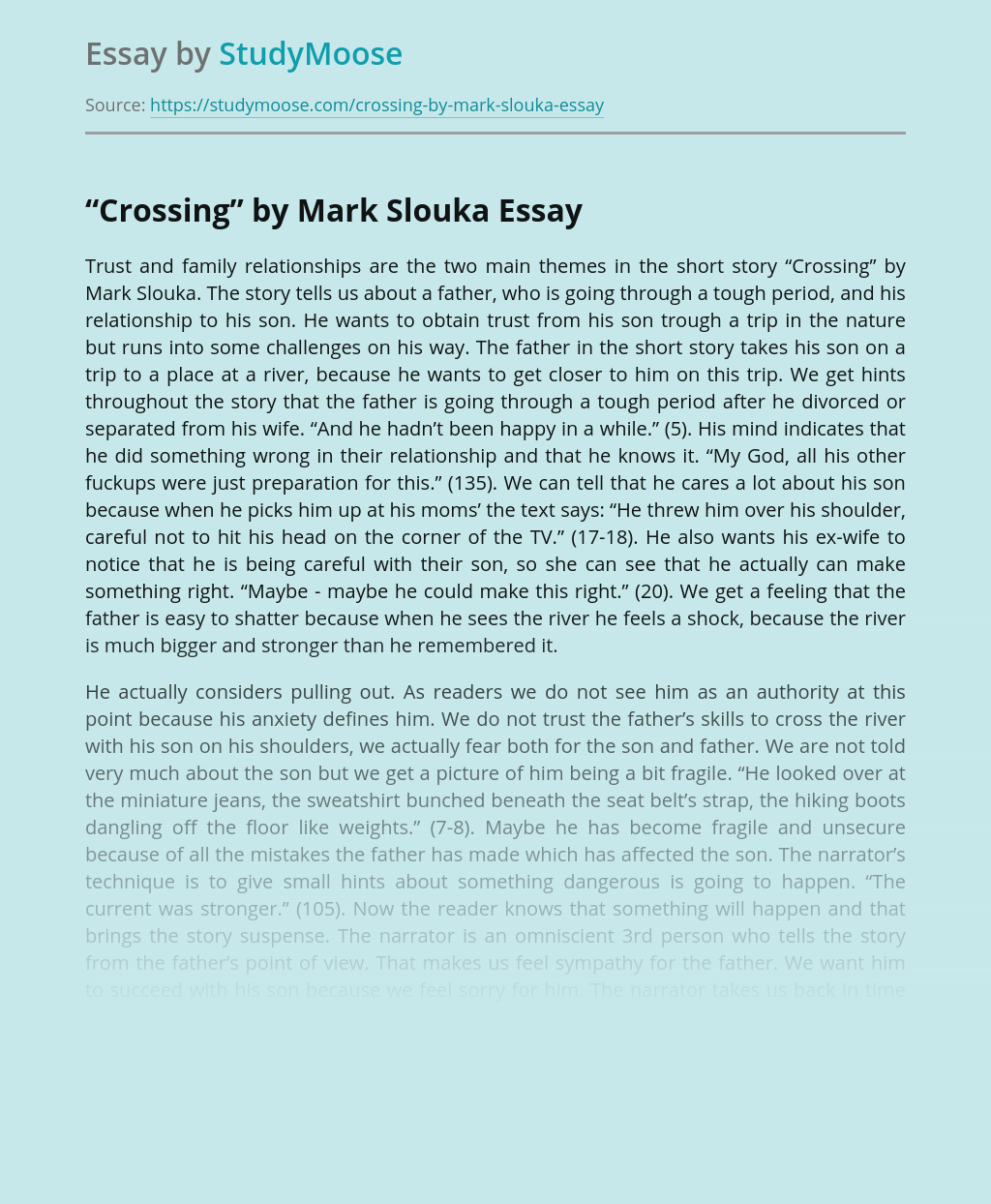 'The Necklace' and 'The Gift of the Magi'

‘The Gift of the Magi’ by O. Henry and ‘The Necklace’ by Guy de Maupassant are two short stories that share some similarities. Namely, they are both ironic. The two main characters in both also happen to be husband and wife and make sacrifices for their spouse. The husband in ‘The Necklace’ is a ‘thrifty...

The short story ”Ernie Breaks” by Genevieve Scott is about ten year old Cara, who lives with her mother and her older brother, Jed. The main themes in the short story are responsibility and expectations. It can be elaborated to what you have to do, so you can live up to challenges you are approaching,...

Summary – The Bridal Party The story begins in Normandy, sometime around May. The main character, Mike Curly, is introduced, along with the news that his ex-girlfriend, Caroline Dandy, whom he dated for two years, is engaged and will be getting married in Paris. It explains that the two broke up because of Michael’s lack...