Literature is often about crossing boundaries

Literature is often about crossing boundaries, both physically and mentally. In what ways, and to what extent, does the crossing of boundaries contribute to Kate Chopin’s “The Awakening?”

In Kate Chopin’s “The Awakening”, the author uses physical and mental boundaries which the main character, Edna crosses throughout the story as a symbol for the freedom she yearns and all the boundaries she has to overcome before finally achieving it.

One of the most important boundaries when she swims in the ocean for the first time.

Don't use plagiarized sources. Get your custom essay on
“ Literature is often about crossing boundaries ”
Get custom paper
NEW! smart matching with writer

The sea is such a vast and endless that it can symbolize freedom. Although Edna has cross societies boundaries, Edna is still at this point, attached to her family and responsibility however this changes after she goes into the ocean. When Edna swims in the ocean she experiences self discovery and an unknown awareness. This moment is also ironic since all the people in the beach are applauding this achievement, when in reality it is a symbol of defiance against society.

In this moment Edna crosses the limitations that society has created in her mind and she does not “drown” doing so. This shows that Edna not drowning is being able to stand up for herself as an independent women without her husband, friends or children. The fact that she wants to swim very far where no one has swam before, is significant because this is a foreshadowing that Edna will go further away from societies norms “than anyone has before”.

Another moment when Edna crosses physical and mental boundaries is Edna crosses is when she decides to leave with Robert to the isle of Chï¿½niï¿½re.

In this instance Edna is crossing both physical and emotional boundaries, this is the first moment where Edna leaves her home, it is important to remember that her husband is home and not on a work trip. Before she leaves with Robert we can see her defiance towards her husband as she realizes that she always did what she said without questioning it. The night before Edna became aware of the senselessness of obeying everything her husband says, this is due to her previous self discovery. While swimming is crossing boundaries mentally, going to Chï¿½niï¿½re Isle is her physical action in crossing society’s boundaries. After leaving church in the Island Edna takes a nap and then wakes up feeling “glowing” and “full of energy” this shows how Edna feel positively after crossing societies boundaries instead of guilt or shame.

Additionally, it is interesting to notice that Edna feels guilt and shame after becoming romantically involved with Alcï¿½e, however it is important that she doesn’t feel unfaithful towards her husband but rather towards Robert. Having such strong feelings towards Robert is also a representation of Edna mentally crossing boundaries of society which would expect her to feel unfaithful towards her husband and also expect her to repress any feelings she has towards Robert.

The ultimate act of crossing boundaries in its totality is when Edna decides to move from her husbands house. At this point she isn’t even talking care of her children and her husband is out of town which shows she has reached complete independence. In her home Edna can act and do whatever she wishes. It is also significant that she decides to move into the pigeon house without Lï¿½once permission showing that he no longer has any control over her life and decisions, which was also shown when Edna refused to go to her sister’s wedding. It is symbolic that the house is referred to as the “pigeon house” which is a symbolism for a birds cage and although Ednas intention is to become free this is a foreshadowing that Edna still had some mental boundaries she has to overcome.

These mental boundaries are involved with Edna herself, because she realizes that although she changed and acted against society everyone around her specifically Robert had not changed. This leads to the ultimate boundary Edna has to cross for society to no longer oppress Edna and her desires and dreams, death. Once again the ocean is representative of freedom, but this time Edna does not return to shore. This shows how the first time she went swimming she did find freedom but it was only temporary because it was only within herself and not others.

Essentially, every boundary that Edna crosses represents a stepping stone in the process of her awakening towards the only way to escape societies constrains, freedom.

Literature is often about crossing boundaries. (2020, Jun 02). Retrieved from http://studymoose.com/literature-often-crossing-boundaries-new-essay 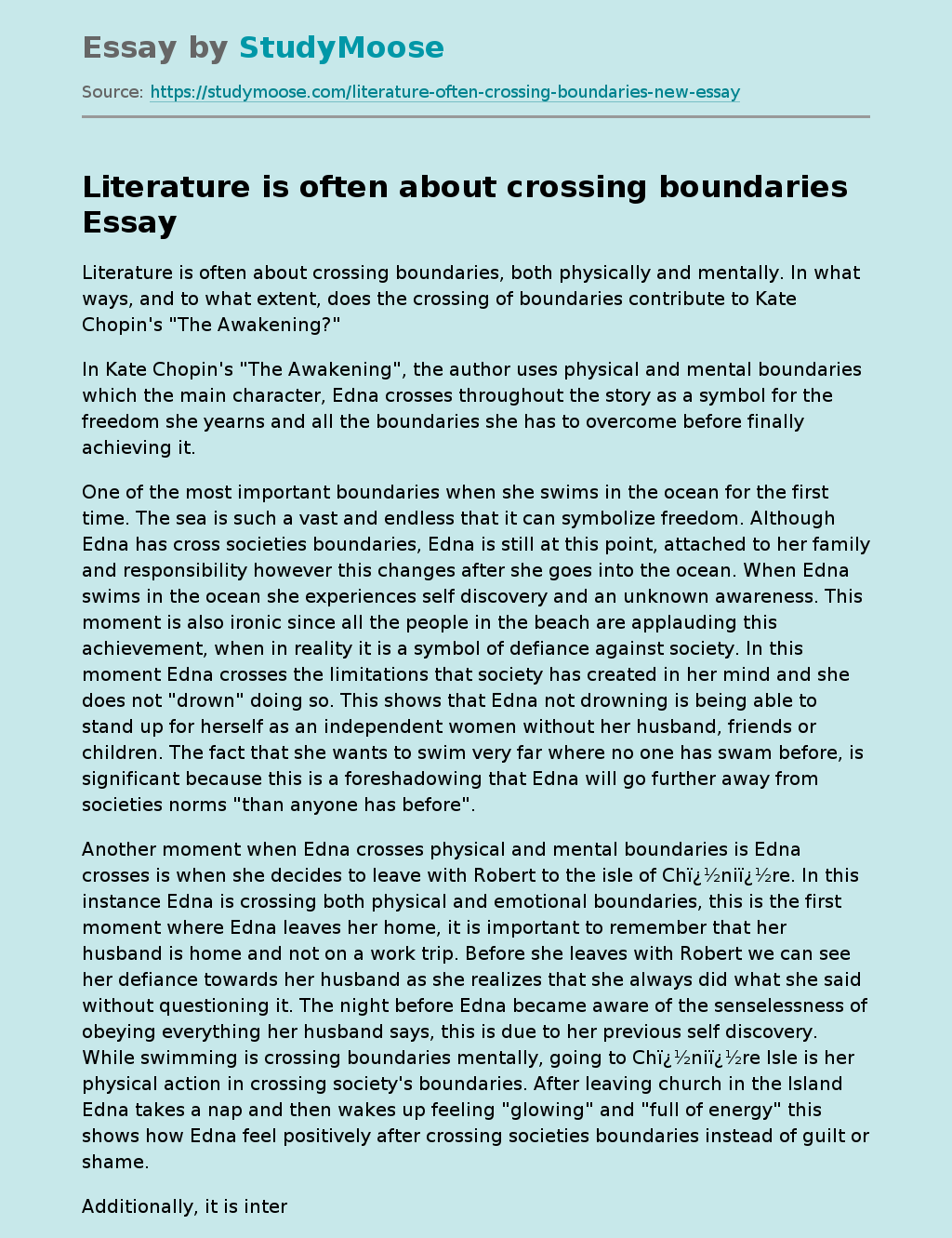