Motivation can often serve a person well, and push an individual to strive for something greater than they could have ever imagined. However, when one becomes too consumed by their motivations, and allow it to direct their course of action, they often are willing to sacrifice everything in order to achieve their ultimate goal. In the short story “The Sweetheart of the Song Tra Bong”, Tim O’Brien utilizes motifs and symbols to suggest that when an individual’s course of actions are consumed by their motivations it often causes them to think irrationally, affects their relationships with others, and ultimately change in human nature.

Don't use plagiarized sources. Get your custom essay on
“ Motivation can often serve a person well and push an individual to ”
Get custom paper
NEW! smart matching with writer

Initially when Mary Anne arrived in Vietnam, she was placed into a different world. Her motivation and curiosity to learn more about the culture is the foundation of what drives her to direct her course of actions. During her time in Vietnam, Mary Anne kept on pestering Mark Fossie to bring her down to the village.

Despite the potential dangers Mark Fossie had warned her about, Mary Anne was persistent on seeing the village for herself. She was so motivated to expand her knowledge of Vietnam that she became too blinded to think rationally. Similarly, when Mary Anne followed the “Greenies” on their ambush her mind was clouded by her motivations. Her security and safety no longer appealed to her, only her lust for more adventure was what determined her course of action. Eventually the ambushes became a normal routine for her, she was consumed by Vietnam, her motivation was the cause of her irrational behaviour and narrow minded thinking.

Mary Anne was intrigued by the new world she had been introduced to, she wanted to experience how Vietnam contrasted from her home, and the mysterious land and culture captivated her young mind. As her time in Vietnam progressed, her curiosity kept developing. Ultimately Mary Anne allowed the nature of her motivation to control her course of actions and became too blindly devoted.

The initial relationship between Mark Fossie and Mary Anne was one full of dreams and assurance. When characterized together they seemed to have a perfect relationship. It is through the nature of Mary Anne’s developing motivations and actions that ultimately shift the relationship between the two lovers. When Mary Anne returns from her first ambush Mark was disturbed, he came to the realization that his once former sweetheart was no longer the same person. His frustration causes him to immediately yell at Mary Anne and denounce her actions. Later in the evening, Mark claims that the two of them had gotten engaged. However through Mary Anne’s silent and submissive attitude, it is evident that there is strain between their relationship after the incident. It is over the next few days that it becomes obvious that there is tension between the two. This is reinforced by the stiffness in their interactions with one another as described by Rat, “their faces showed the tension. Too polite, too thoughtful” (104). It is as if their engagement was a desperate attempt by Mark to retain their relationship and to protect the last bit of innocence Mary Anne had left. As Mark began making arrangements to send Mary Anne home, she would not speak. Her eyes were drawn towards the depths of the wilderness. She became invested into Vietnam and her desire to “swallow the whole country” served as the pillar of her motivations that ultimately directed her decisions and altered her relationship with Mark Fossie.

Throughout the story Mary Anne’s actions are fueled purely by her motivation to learn and uncover the mystery behind Vietnam. It is her irrational behaviour and differences in relationship that inevitably causes her change in human nature. Upon her arrival in Vietnam, Mary Anne was the personification of innocence. She was described by Rat to have a “bubbly personality” that often brought morale to the group. However we quickly learn that during Mary Anne’s time in Vietnam, her curiosity became a motivating factor that directed her course of actions. The dynamic character transition from highschool sweetheart to a deadly soldier is reinforced by the story’s recurring motif of Mary Anne’s eyes. Initially, when Mary Anne first arrived in Vietnam, Rat describes her to have pretty blue eyes that glow. Her eyes were symbolic of her purity and innocence back in Cleaveland Heights. However, overtime Mary Anne’s motivations began to develop and she became more desperate to uncover the secrets of Vietnam. She was no longer the same person as before, “Her eyes seemed to shine in the dark-not blue, but a bright glowing jungle green” (106). It was evident that Mary Anne had been so engrossed into Vietnam that she had lost the innocence that once kept her humane. The “glowing jungle green” eyes she displayed reinforces the idea of her being lost to jungles of Vietnam, and ultimately shows how her motivation had altered her human nature. When Mary Anne was first introduced in the story it was clear she was drawn to Vietnam and curious about the culture. At first it seems as though Mary Anne was just a curious teenager, excited to explore the foreign land she was surrounded by. She would continuously pester Mark Fossie to bring her down to the village to see the locals, despite his warnings. She would claim “They’re human beings, aren’t they? Like everybody else?” (96) the irony in this quote is slowly revealed throughout the story as we discover Mary Anne’s change in human nature, ultimately causes her to lose her innocence and dehumanize the vietnamese locals, killing them like animals.

Throughout the story, Tim O’Brien highlights how motivations can direct the course of an individual’s actions. It is how consumed an individual is by their motivations that ultimately determines whether their source of motivation will become beneficial in helping them make the best possible decision. In the case of Mary Anne, her willingness to sacrifice her security by participating in dangerous ambushes with the “Greenies” is evidence of how her motivation had fueled her irrational behaviour. Similarly, the shift in her relationship with Mark Fossie was because of her obsession with Vietnam. She became so clouded by her motivations that her course of actions created tension between her and Mark Fossie. The recurring motif of Mary Anne’s eyes are portrayed as a symbol towards her transformation. Because of her incentive to understand Vietnam, Mary Anne becomes absorbed by the country, and ultimately changes in human nature. As portrayed in the short story, motivation is a fundamental key that encourages an individual’s actions, but when one becomes too driven by their passions it can ultimately change their character. In order to apply our motivations to assist us in making the right choices, “The Sweetheart of the Song Trabong” advises us that when one allows their mind to be consumed by their motivations, it will inevitably control their lives.

Motivation can often serve a person well and push an individual to. (2019, Nov 24). Retrieved from https://studymoose.com/motivation-can-often-serve-a-person-well-and-push-an-individual-to-example-essay 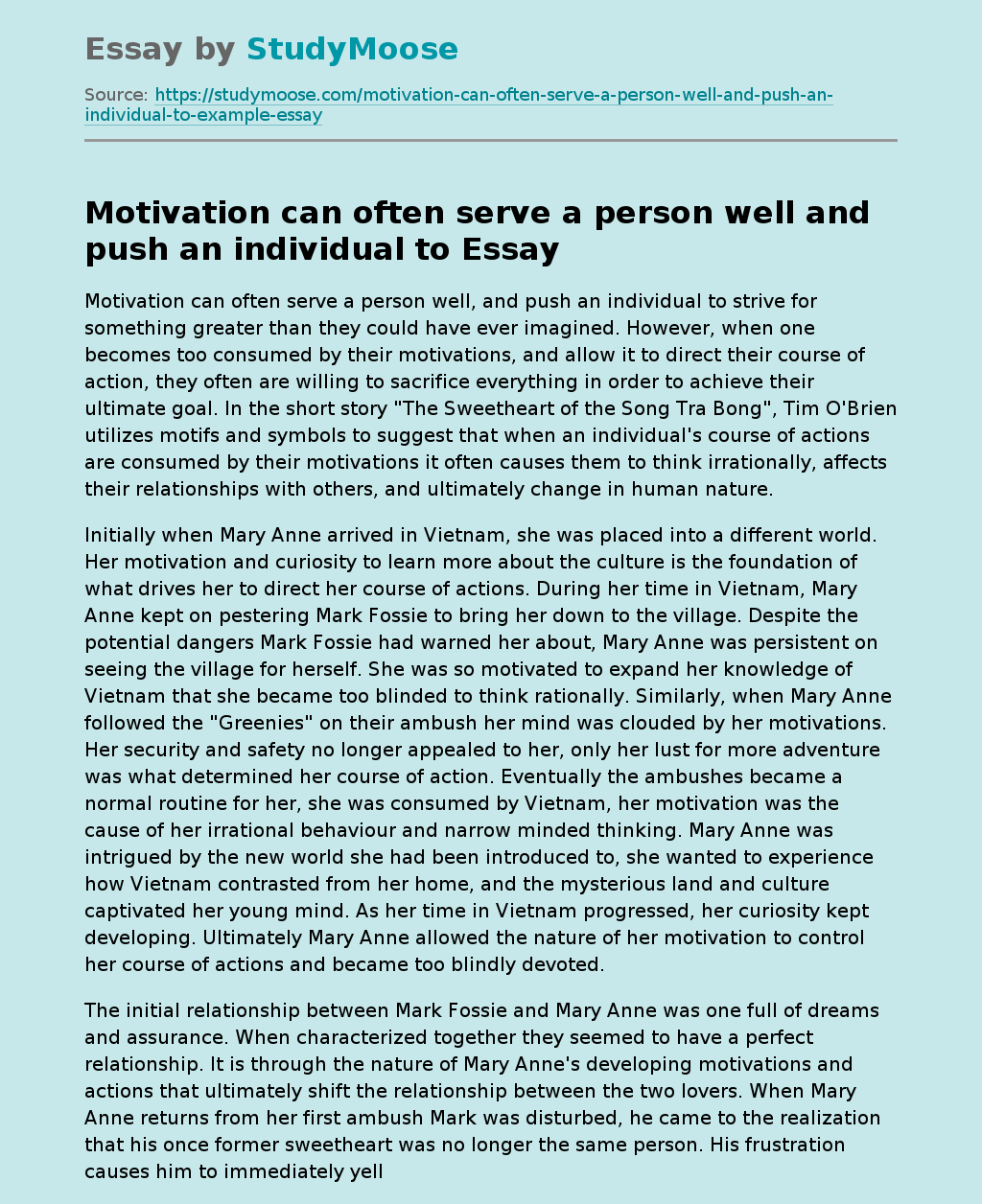