Shame on Children at the Dinner Table at School

In an article written for CNN titled “School Lunch Shaming: ‘No one believes we do this to kids’: Will Congress end school lunch shaming?” by Heather Long in May of 2017, Long sheds light on what Congress is trying to do to end the habit of lunch shaming at school. Unless someone has firsthand experience with this issue, some may not know that this is a horrible issue in America. This is why it is so important that Long, wrote this article.

Don't use plagiarized sources. Get your custom essay on
“ Shame on Children at the Dinner Table at School ”
Get custom paper
NEW! smart matching with writer

She used facts and interviews to support her article. It is an issue that started long before her writing and has continued still today. This is why We, as Americans, need to stand together, look at the facts and put a stop to lunch shaming at school. The United States needs to focus on properly feeding our children at school, instead of some of the other issues that are focused on.

Long’s expository report on lunch shaming at schools gave some great insight on what Congress is doing to stop this act.

Proficient in: Dropping Out Of High School

Her article does not give the reader her stance on the subject, but rather facts and interviews with people who are concerned and aware of the ongoing problem. She has the readers see from different points of view, the concern for these children. She has used pathos in this article by using the emotions of the people she is writing about. By doing this, she is giving her readers first-hand experience of some of the children this is affecting, and what they have to go through.

“We want schools to work with parents, not target the student, to address outstanding lunch payments,” said Republican Congressman Rodney Davis (Long 2017). A bill was introduced called the Anti-Lunch Shaming Act of 2017 to end the harm this is doing to children. An article written on the same subject in the New York Times in April of 2017 by Bettina Elias Siegel titled “Shaming Children So Parents Will Pay the School Lunch Bill”, Siegel says that Minnesota and the San Francisco Unified School District are also working on changing their policies. After New Mexico adopted the bill a spokesperson for the Albuquerque Public Schools said, “Our biggest hope for this bill is that no student will have to contemplate what meal they are going to get.” (Siegel 2017)

The author in the New York Times article also uses expository writing, as well. She also uses the pathos approach, by using the emotion of the people that she is writing about. She interviews students, staff, and uses facts from various sources. These sources are the Department of Agriculture, school districts, and organizations. Siegel, like Long does not give readers her position on the topic. Instead, they both use their sources to spark emotion in their articles. Each author is bringing up a topic that is not talked about, yet it is happening every day in our school systems. It not only hurts our children, but it hurts the hearts of the cafeteria workers as well. Take for example a worker in Pennsylvania that quit her job after being forced to a lunch from a child with an unpaid bill (Siegel 2017.) While not all cafeteria workers feel bad enough to quit their jobs, it does put them in a position of making a very sad decision.

There is more that needs to be done. Without attention being drawn to the issue less will be known. With the Department of Agriculture imposing a July first deadline for states to establish policies on how to treat children who cannot pay for food (Siegel 2017) this issue may not have ever been brought up. “It has been a longstanding issue in schools, one that’s gone on for decades,” said Kevin W. Concannon. There are “preferred alternatives” that the department offers.

Although neither author provides a viewpoint on how they feel about this topic, it is clear how the people in their articles feel. It is not hard for the reader to come to their own conclusion that this an awful problem in our school systems. Both authors were able to provide evidence to show how children are being shamed. This can not only hinder their ability to learn during the day, but also have lasting negative effects. It’s not like these children are in jail, they are in school. This is why we need to stand together, look at the facts, and end lunch shamming for good. This is why the United States government needs to get involved and focus their efforts on feeding these children an appropriate meal, instead of focusing on most of the issues they are choosing to focus on.

Shame on Children at the Dinner Table at School. (2021, Dec 13). Retrieved from https://studymoose.com/shame-on-children-at-the-dinner-table-at-school-essay 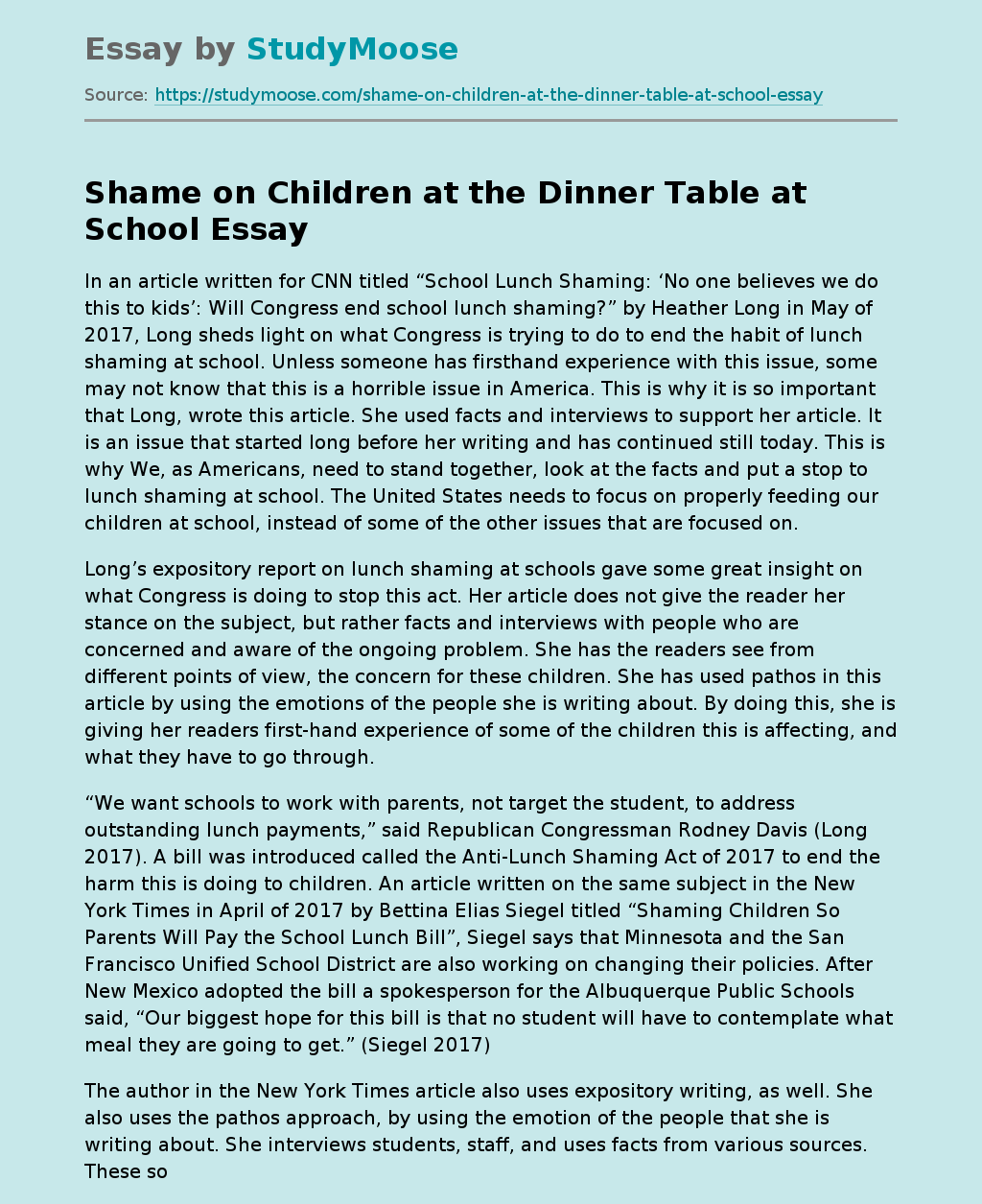