Rhetorical Essay: Shame is Worth a Try

Dan M. Kahan’s “Shame is Worth a Try” was first published in the Boston Globe on August 5, 2001. In this essay, Kahan contends that the use of “shame” as a penalty of low level crimes is not only effective, but is an economical and humane alternative to imprisonment. It’s difficult to ascertain who Kahan’s intended audience is. However, because he uses examples of shame being used as an alternative sanction around the country; “Drive drunk in Florida or Texas, and you might be required to place a conspicuous “DUI” bumper sticker on your car” (Kahan 574) I would venture to say that the public at large is whom he is possibly targeting.

Don't use plagiarized sources. Get your custom essay on
“ Rhetorical Essay: Shame is Worth a Try ”
Get custom paper
NEW! smart matching with writer

This is further reinforced by the fact that the author chose to at least “initially” publish the article in the Boston Globe, a local Massachusetts newspaper. Kahan competently uses contrast and comparison throughout his essay to illuminate a subject that otherwise might be ignored. Nevertheless he ultimately falls short of being convincing, mainly, due to his lack of usage, of relevant facts and figures.

Kahan opens his essay with the basic question “is shame an appropriate criminal punishment?” (574).

He then explores examples of its use in various jurisdictions. “Refuse to make your child-support payments in Virginia, and you will find that your vehicle has been immobilized with an appropriate colored boot…” (Kahan 575). Immediately after grabbing the readers attention with examples, Kahan presents a contrasting viewpoint. “Many experts, however, are skeptical of these new shaming punishments. Some question their effectiveness as a deterrent…”(Kahan 575).

This further elicits the readers curiosity, bringing them to the heart of the issue. The author eloquently asks the question, “Who is right?” (575). He then goes on to use a logos style exploration, of both sides of the issue. Kahan’s main claim is that proponents don’t get that shame, can be as effective as prison, at a lower overall cost to society. Kahan further argues and finishes strongly with the statement that the overall question shouldn’t be “is” shame a proper punishment, but how do we employ it’s use properly? The author does an admirable job of grabbing the readers attention right from the start by giving interesting, and relevant examples of how shame has been employed around the country. ie: DUI’s in Texas, child-support in Virginia.

Moreover, his use of logos styled arguments throughout the article does an excellent job of articulating his viewpoint while keeping the reader engaged. Kahan gains the readers respect by presenting well reasoned and intelligent viewpoints in such a way that it’s actually hard to find any particular fault with his assertions. The authors choice to present an opposing view right from the start, although not as effective as it could have been, was an apropos way to strengthen his stance. In moving forward, Kahan counterbalances some opponents by making it perfectly clear that his stance for shame based penalties applies to minor infractions of the law only . “There’s obviously no alternative to imprisonment for murderers, rapists, and other violent criminals…” (Kahan 575). By using examples of these shame based penalties from around the country, the author also makes it appear to the reader that he is knowledgeable in matters concerning our justice system. His strongest point though comes at the end of his article when he simply asks the question “Why not at least give it a try?” (Kahan 576).

This seems to beg an additional question, since our current system is overloaded why not try a different approach? Kahans major downfall in this article is his insufficient use of relevant facts and figures. Although the author does reference one particular study by Harold Grasmick that shows “public disgrace exerts greater pressure to comply with the law than the threat of imprisonment and other formal punishments.” (Kahan 576). Overall it lacks the kind of “hard figures” it would take statistically to reinforce his claim. If the author had chosen to include some statistics on say, the effectiveness of alternative sanctions, or showed a cost analysis on prison sentences. He would have established a sense of trustworthiness with his reader. Unfortunately, due to the lack of those types of “hard figures” his essay lacks credibility. That lack of credibility, leaves the reader to wonder, just how knowledgeable is this author with this subject? If Kahan had just chosen to tell us a little about himself and his background, he could have very well hit a home run in the credibility department. He does after all have an exceptionally distinguished law career. Unfortunately, he fails to do so, thus leaving the reader with too many unanswered questions.

The last major complaint of this essay is a complete lack of pathos style writing. Overcrowding, as well as, the shear number of offenders in our criminal justice system alone is staggering. This hot button topic could have easily been used to stir up some emotion and passion in his argument. In this way, the author would have essentially legitimized his stance, as well as, inspired his readers to take action. For whatever reason though, the author chose to ignore this completely, and as such completely fails in winning over his audience. In the writing of this essay, Kahan addresses an important topic of our times.

Our current criminal justice system is overloaded and wrought with problems, and addressing how to punish petty crimes is certainly relevant. Yet his article, despite illuminating this controversial and important subject, fails in delivering the facts needed to inspire any sort of change. Kahan does an admirable job of creating interest in a topic many might otherwise ignore. However, he ultimately falls flat in the execution and leaves the reader floundering, rather than informed. As a last note, Khans writing style might not always include the use of pathos. Unfortunately for him his lack of appeal to emotion in this particular essay will render it ultimately “forgettable”.

Rhetorical Essay: Shame is Worth a Try. (2016, May 19). Retrieved from https://studymoose.com/rhetorical-essay-shame-is-worth-a-try-essay 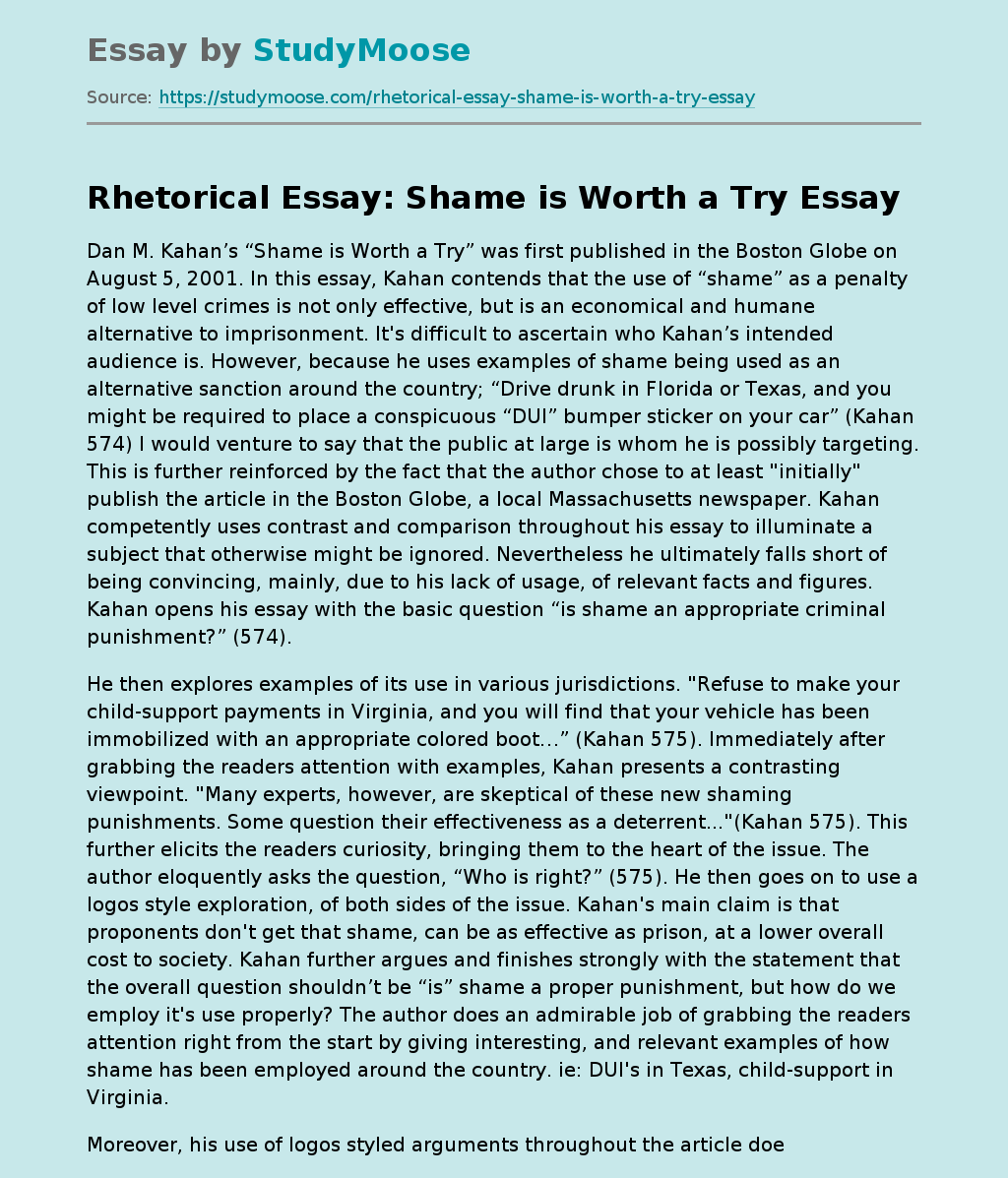