Ecology can be understood as a branch of biology that has extended into a political ideology, of nature as an interconnected whole1. The two branches of ‘deep’ and ‘shallow’ ecology were termed by Norwegian philosopher Arne Naess, and allow some distinction into the varied ecologist groups and views within contemporary society. ‘Shallow’ ecology, otherwise known as ‘weak’ ecology or environmentalism, supports an anthropocentric view and endorses that the natural world is something to be nurtured and preserved in order to support human life.

Don't use plagiarized sources. Get your custom essay on
“ Shallow ecology ”
Get custom paper
NEW! smart matching with writer

‘Deep’ ecology, on the other hand, is far more challenging in that it suggests that human life holds equal weighting with any other life form. The vast differences between these two threads can be analysed in a number of areas. Through economic growth, anthropocentric views, the different ways these can be seen, and the problems facing ecology as a whole, we are able to determine a clearer picture of not only deep and shallow threads of ecology, but in the political ideologies of nature as a whole.

Ecological ideas can be traced back to as far as the protest against the rise of industrialisation and urbanisation in the nineteenth century2, although mechanistic ideas were created up to two centuries previous in the scientific revolution. 3 Shallow ecologists, in light of economic principles, approve of obtaining wealth at a gradual rate, and believe that material costs can be balanced against environmental ones. Deep ecologists, alternatively, argue that this is not nearly radical enough and that materialism itself is the cause of the ecological crisis4, trying to reach “beyond the perspectives of conventional political creeds”5.

The most basic argument against economic principles was stressed by Andrew Dobson when he concluded the finitude of the world as a physical object that cannot continue forever, “finitude is the basic reason why infinite population and economic growth are impossible. “6 Many more radical environmental groups stress that life in commercial and materialistic societies divide from us our natural environment, and that “those who live amid concrete, plastic and computers can easily forget how fundamentally our well-being is tied to the land.

“7 Progressing further towards a purely technological existence, human beings allow themselves to be linked quite similarly to their society, “people become instruments of production”8. It is suffice to say, thus, that cities and heavily urbanized areas have been the concentration of concern, in the dramatic difference in damage being done between them and lower-populated and less industrial areas9. Problems arise in both socialist and capital societies, proving that the nature of self interest of human beings will continue to destroy the environment, no matter which political system is in place10.

Additionally, under the knowledge that the vast resources we have been given have allowed us to build and advance in society, the idea or attitude that human beings can advance beyond or not require the natural world any more is impossible11. Within the nature of economic growth there is no cause for discrimination, and affects First, Second and Third World countries in a number of ways, as well as all levels and hierarchies of society12.

Capitalist society requires within its principles this increase in wealth, and so the vast economic gap between Third and First World countries will never be bridged but instead one will always be financially dependent on the other13. This results in inequality among peoples, which goes against deep ecological principles. As a result of this, if equality among human beings cannot be reached, it is difficult to see human beings ever seeking or maintaining equality with other life forms.

Deep ecologists not only warn individuals to reduce their affinity with material consumption, but also encourage societies to realise that continual economic growth will not necessarily satisfy human wants or needs. 14 The shallow ecological view, that it is possible to successfully sustain both an environmentally friendly and also economic society, is a much more appealing one to many people. Self interest and the survival instinct is a common thread among species, but it should be noted that there is a limit to the extents to which we can go.

Animals and plant life utilise each other as part of a natural food chain, but humans differ to this in that by believing themselves to be superior, they abuse this power. Humanism is ‘the sad mistake of many ideologies’15, and it is this arrogance that has assisted in the destruction of the natural world. It can be said that the growing concern for our natural environment is due only to the fact that economic growth is endangering human survival, which again is an approach consisting entirely of self-interest, and without this, greens groups would be struggling for support16.

Deep ecology is narrowly minded in that it considers any opposing view to be anthropocentric, but does so in the hope for a more equal society17. The natural world, radical environmentalists insist, is not just an “agglomeration of resources”18 for human consumption. It rejects any lingering belief that the human species is in some way superior to any other species, or even nature itself, and ties in with ecocentrism, the notion that the maintenance of the ecological balance is the ultimate priority19.

The rights of animals have the same moral status as humans, and nature is an ethical community where human beings are ‘plain citizens’20; anything else is ‘specieism’21. In 2001, in North America and Europe alone, approximately 17 billion land animals were raised and killed for their meat. Most lived and died in conditions we as humans would consider to be ‘morally repugnant’, but this is justified as the majority of human beings believe that animals do not have an equal standing or moral consideration22. As Peter Singer explains, “we cannot know what (animals) are feeling, but then nor can we know with other people”23.

Just because other human beings exist in the same conditions as ourselves does not mean we can assess the difference in levels of pain between themselves and us, or between us and animals. Shallow ecology, on the other hand, accepts many of the lessons of ecology but exists to harness them to human needs and ends. The natural world will provide for us in years to come should we nurture it now. On the other hand, the social organisation of many societies has been created upon the exploitation of the natural world, and thus has become almost acceptable24.

Some radically shallow ecologists, however, go as far as to suggest that nothing should be left in its original or natural condition, as such non-use would be a waste, and wastage of resources should be eliminated. This view regards the non-human world in use value terms25. The difference in these two ecological views can be seen in that while shallow ecologists may claim the value of a tropical rainforest in that it provides oxygen for human beings, or that it stops landslides, deep ecologists would insist that they are an imperative part of our natural world26. 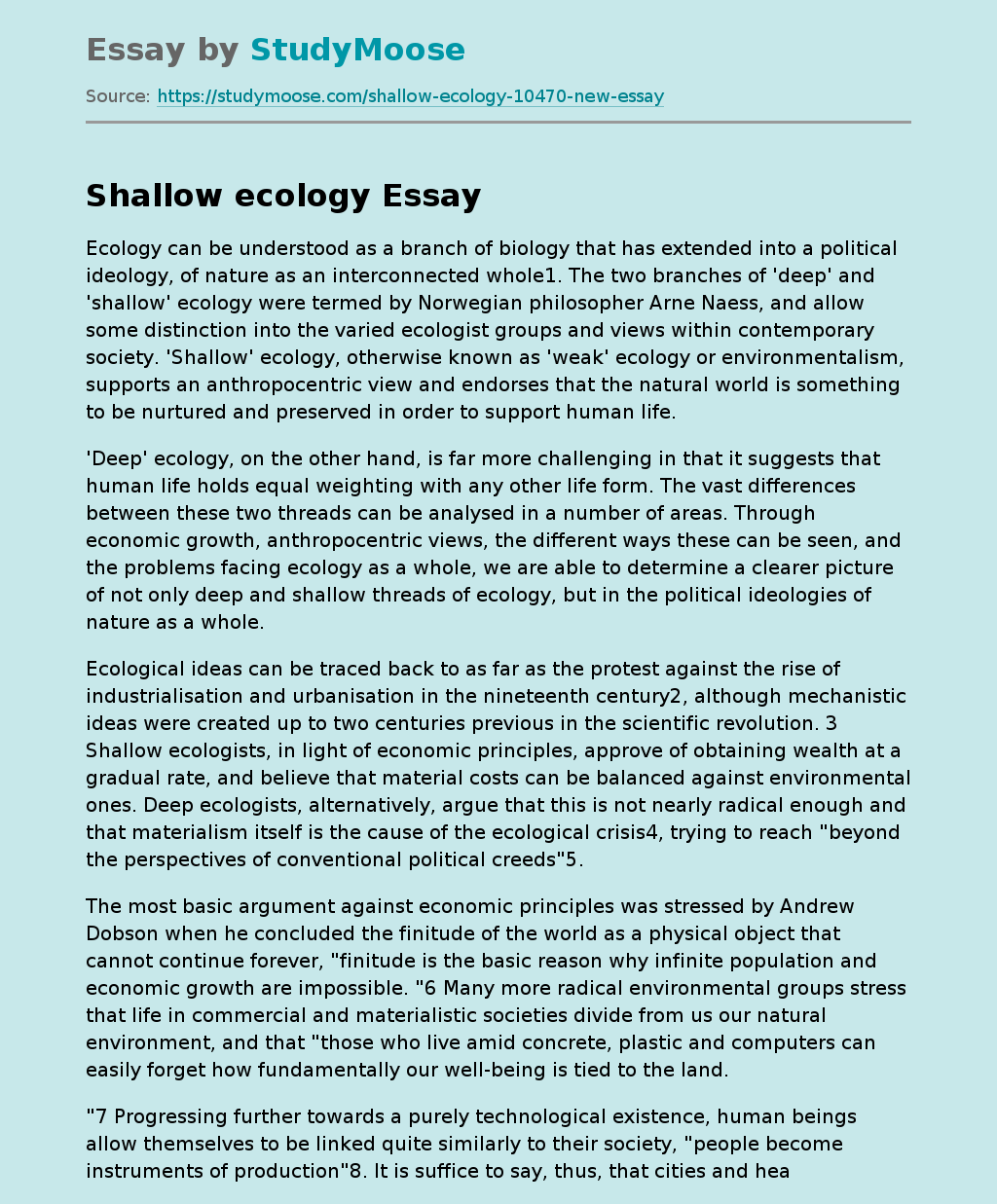