It is necessary to view humans as a combination of nature and nurture because of the complexity of our species. Genes and environment have an equal hand in making an individual who he is. Putting aside one position of the debate will not give a good picture of what human beings are. In fact, this can result to stereotyping which leads to unjust practices within society. Nowadays, stereotyping is also causing a prejudice against many different groups.

An example could be cited when people are hindered from attaining good jobs because their psychological tests during application shows that they have predispositions to certain character traits.

Turn in your highest-quality paper
Get a qualified writer to help you with
“ Freedom of Choice ”
Get high-quality paper
NEW! AI matching with writers

There are companies who do not hire employees that have been raised by others instead of their biological parents because of the implications on past studies regarding the behavioral patterns of these kinds of individuals. The behavior of people cannot also be deduced by simply looking at the way they were brought up.

There are a lot of strong proofs that psychological problems like depression and schizophrenia can be traced to the genes of a person.

To inhibit the focus of the debate on the possibility that only society has an influence over the behavior of an individual restricts the researches that can actually find solutions to current problems. An example would be the development of studies saying that anti-social genes of parents are inherited by their children. If genetics and psychology will work together, then solutions to alleviate the provocation of violence might be quickly found to help fight the problem of juvenile delinquency.

Erik Parens, in his article, “Taking Behavioral Genetics Seriously,” says that genetics should be taken in the light that genes are just one component of the biological make up of man. Other physiological aspects like temperature, hormones and neural activity can also affect man’s development. To force the issue that man’s biological structure dictates his future constricts the understanding that there are so many aspects within man’s physical body that can alter these predictions. Besides, these physiological factors are also affected by the environment. Darwinism has been advocated by those who believe in the nature side of the debate.

However, I believe that man’s evolution cannot be simply attributed to his physical developments. It should take into account his communal development because man is primarily a social being. To understand how man has reached this point of modernism and civilization, scientists from both physical and social perspectives must see how man has used his intelligence and inter-relationships to attain the preservation of his species. Steven Pinker’s essay entitled “Why Nature & Nurture Won’t Go Away” suggests that a “holistic interactionism” between nature and nurture is a compromise that might best explain how man becomes himself.

Arguments that take too long to be resolved usually result to discord instead of solutions. If both sides of the debate would sit together and understand how their respective positions can help alleviate the many sufferings of people who are sick, prejudiced and stereotyped, then the world can see better progress and peace. Continuing the debate on nature versus nurture only stands to promote the idea that man is not capable of doing something about his life. It makes it easier to blame so many other things for misery.

However, man is a thinking social being who has the freedom to change the course of his life. Genetics may be able to determine his predispositions to certain behaviors and the society he lived in may have effects on how he views his life but each individual can decide to what actions he can take to create a better future for himself. Burying the debate will push man to grasp how much freedom he has in his hands to mold a better society that knows how to compromise and uphold genuine respect and peace within its boundaries. 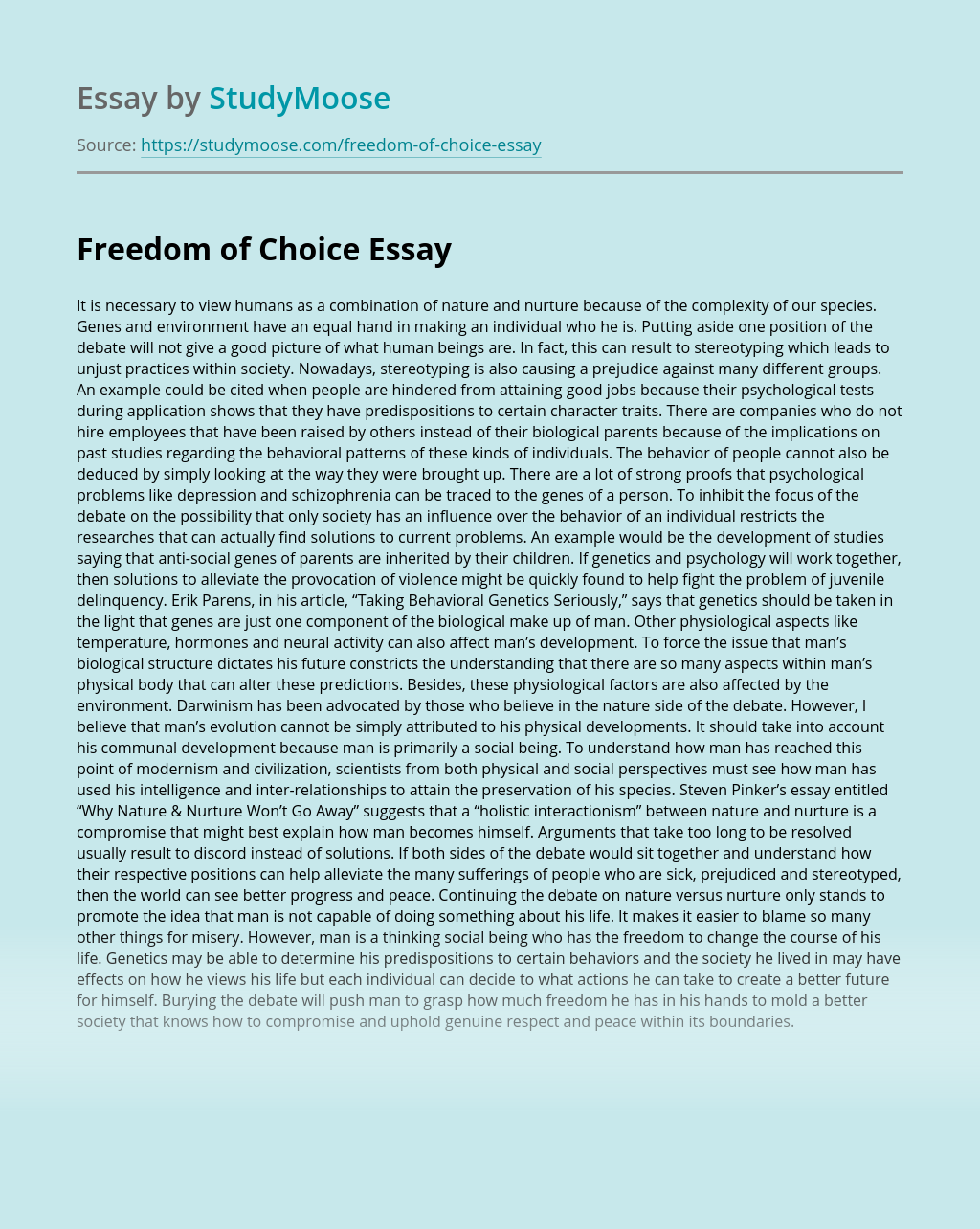 Turn in your highest-quality paper
Get a qualified writer to help you with
“ Freedom of Choice ”
Get high-quality paper
Helping students since 2015
Stay Safe, Stay Original