How has Shakespeare crafted act 1 scene 5 of Romeo and Juliet for maximum impact on the audience?

Shakespeare’s play Romeo and Juliet is a tragedy that tells the story of two ”star crossed lovers” who pursue their love for each other despite the fact that their families have a prolonged hatred of one another.

Act 1 begins with a fight between the servants of the Montagues’ and the Capulets’. Shakespeare begins the scene like this to attract the audiences’ attention and to make them take sides.

Don't use plagiarized sources. Get your custom essay on
“ How has Shakespeare crafted act 1 scene 5 of Romeo and Juliet for maximum impact on the audience? ”
Get custom paper
NEW! smart matching with writer

Lord Capulet has sent one of his servants to deliver invitations to people inviting them to a banquet at his house the Capulet servant cannot read, so he asks one of the other servants to it for him…the servant that reads it though, just so happens to be a Montague servant! Romeo then fids out from Balthazar, his man servant, that his love Rosaline is going.

Juliet is the only child of Lord and Lady Capulet.

Lord Capulet has arranged a marriage with his daughter, Juliet to Paris, who is rich, and has contacts with Prince Escalus, who rules Verona.

Juliet is reluctant to marry Paris for various reasons. One reason is that she doesn’t want to marry him just because it is what her father wants, she also isn’t in love with Paris and thinks that she will find him boring and unexciting.

Juliet’s relationship with her mother is very ‘sterile’. She is closer to her nurse than her mother, possibly because she has been looked after and cared for all her life by her nurse while her mother took a back seat.

We know that Juliet is not close to her mother because she calls her ”madam”.

Act 1 scene 5 is a crucial part of Romeo and Juliet because it’s where Romeo and Juliet first meet. They meet at the Capulet’s banquet. Romeo and Juliet both with different expectations for the evening-Juliet goes so that she can dance with Paris to see whether she likes hi enough to get married (in Shakespeare’s time you married for power and money-not love).

Although Romeo foresees something going wrong, ”some consequence left hanging in the stars”, he goes anyway in the hope that he will see Rosaline. Romeo later confides in his cousin, and good friend, Benvolio that his love for Rosaline is like a ”feather of lead” and that it makes him sick and unhappy because his love is not returned. This tells us that him meeting Juliet was a complete surprise, and this, in turn, adds to the dramatic effect upon the audience.

The Banquet scene (Act 1 scene 5) attracts the audiences’ attention with all the colours, and chaos, that go with any kind of party. All the guests are in their best clothes and jewellery and Lord Capulet is greeting all his guests ”Welcome gentlemen, ladies”, and, because it is a masked ball, Romeo and his friends find it easy to slip in unnoticed.

Once there Romeo does his best to stay hidden, but Tybalt spots him. ”This by his name should be a Montague”. Tybalt then tells Lord Capulet, but he says ”He shall be endured”, and that Tybalt should just leave him alone and not start a fight at the banquet. This links with Act 1 scene 1, because wherever Tybalt goes, he always seems to want to fight or cause trouble. In Act 1 scene 1 he forces Benvolio to join in with the fight although he was the one trying to keep the peace and prevent a fight starting.

There are several examples of love in Act 1 scene 5 that make it interesting for the audience. One example is Lord Capulets happy mood at the beginning of the scene. He begins with greeting his guests, ”Welcome gentlemen”! This displays his cheerful mood.

When Romeo first sees Juliet, the things that he says about her make everything around her seem dull and dismal like ”a snowy dove trooping with crows”. He also says ”Beauty too rich for use, for earth too dear”. This tells us that he thinks that she is so beautiful she shouldn’t even be on earth.

Romeo also uses rhyming couplets when he is speaking about Juliet. ”Did my heart love till now? Forever it, sight! / For I ne’er saw true beauty till this night.”

In Romeo and Juliet’s first conversation, they speak as though they were in prayer. ”Palm to palm is holy palmers kiss”. Their conversation is what is called an embedded sonnet; sonnets are poems of fourteen lines, and are usually associated with love poetry. They build, line by line, on one idea and each line has ten syllables. ”My lips, two blushing pilgrims, ready stand”. They also use holy phrases such as ”holy shrine” and ”saints”. By using expressions such as these, it shows that religion was very important in those days, and Friar Lawrence agrees to marry them because of this and because he thinks that it will bring the two families together.

Despite this scene illustrating a lot of love, it also shows the audience a great deal of hated and anger to balance it out. One example of the hatred in this scene it Tybalt’s anger at hearing Romeo’s voice at the banquet. ”Tis he, that villain Romeo” Tybalt uses the word ‘villain’ three time, this tells us that he feels that Romeo is a horrible person who has come in spite of the conflict between the two families. Tybalt also uses monosyllabic words to emphasize his anger ”it fits when such a villain is a guest”. (Apart from ”villain” which is two syllables). Tybalt also, when he spots Romeo, wants to fight him. He tells his uncle this but Lord Capulet tells him to leave him alone. ”Let him alone”. Tybalt then, because of this, becomes even more heated and angry. ”I’ll not endure him”. Lord Capulet then says, in response to this, ”he shall be endured”. This argument adds to the dramatic effect of the play, and tells the audience that Lord Capulet would rather have one of his enemies at his party, than cause a fight.

When Juliet realises that Romeo is a Montague, ”His name is Romeo, and a Montague”. She is heartbroken. ”My only love sprung from my only hate”. She also says ”If he be married, my grave is like to be my wedding bed”. This means that if nurse returns and says that he is already married, then she will die alone and unmarried.

When Romeo realises that Juliet is a Capulet he is disappointed. ”My life is my foes debt”. This shows us that he loves Juliet, but he shouldn’t. This also shows that he is risking his life for her and that he didn’t think about it and is more in love with the idea of being in love than the reality of it.

Shakespeare uses deliberate interruptions to add suspense to the story. He does this to help the audience understand the topic of patience and impatience. The older characters, apart from Benvolio, seem to be more patient than the younger characters, such as Romeo, Juliet, and Mercutio etc……..

The first interruption, made by the nurse, during Romeo and Juliet’s conversation. ”Madam, your mother crave a word with you.” The nurse interrupts, not to cause trouble, but to give Juliet more time to think about what she is doing.

Tybalt’s interruption, on the other hand, is done to cause conflict between Lord Capulet and Romeo because, as we know, Tybalt wants Romeo to be removed from, or leave, the banquet.

Tybalt’s interruption comes just after Romeo has described Juliet after seeing her for the first time. ”O she doth teach the torches to burn bright”. This shows that Shakespeare has put love and hate side by side to add a dramatic effect to the scene.

Shakespeare has used a range of techniques to maximise the plays effect on the audience, as I have already mentioned.

One thing he has done to add suspense is to have a mixture of private and public moments-such as where they meet, the banquet-very busy and full of life, and Romeo and Juliet having to find somewhere to be able to be intimate.

He also uses a mixture of love and hate between the Montagues and the Capulets, and how when Romeo and Juliet die, they cease to be enemies. One reason for this is because of what Prince Escalus says when the families find out that their children have both died. ”see what a scourge is laid upon your hate/That Heaven finds a way to kill your joys with love”. The prince tells both families that their arguments have killed, not only Romeo and Juliet, but also Mercutio and Paris. They decide then that their feuding must end, and so they both decide to erect gold statues of the couple.

Act 1 scene 5 is one of the most important scenes in the play because it is in this scene that Romeo and Juliet first meet and kiss, and they don’t kiss again until they die. ”For there never was a story of more woe/than that of Juliet, and her Romeo”.

How has Shakespeare crafted act 1 scene 5 of Romeo and Juliet for maximum impact on the audience?. (2020, Jun 02). Retrieved from https://studymoose.com/shakespeare-crafted-act-1-scene-5-romeo-juliet-maximum-impact-audience-new-essay 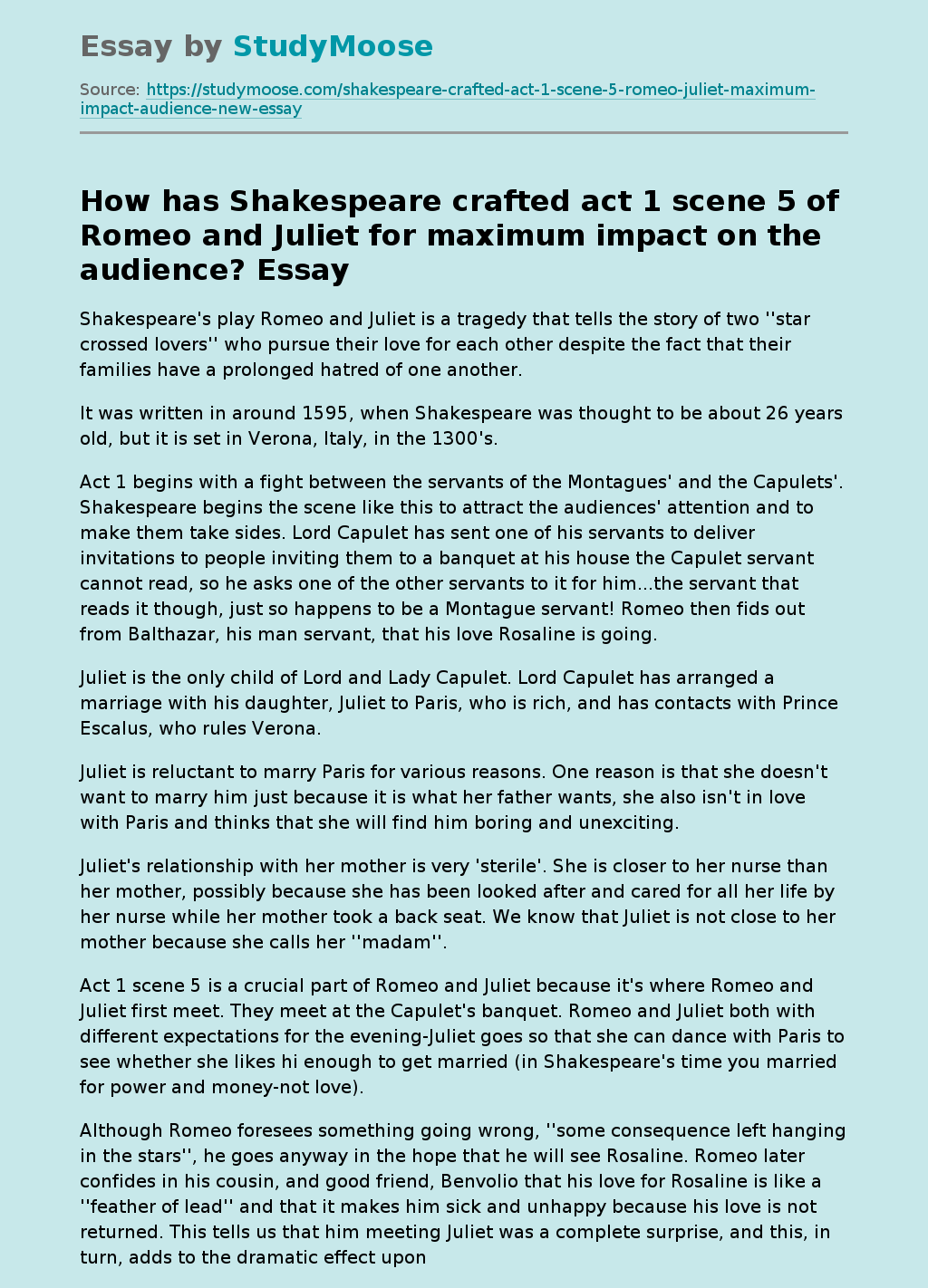