In the play Shakespeare make Act 1 Scene 5 very dramatic because it is the scene where Romeo and Juliet first meet. there was a huge amount of tension building up to this scene because the audience are excited to see Romeo and Juliet first meet, ” I look to like, if looking liking move” Shakespeare uses this quote to get the audience excited for when the meet because they know they will fall in love at first site so is very effective in the audiences point of view.

Don't use plagiarized sources. Get your custom essay on
“ Explore the ways that Shakespeare makes Act 1 Scene 5 of Romeo and Juliet dramatically effective ”
Get custom paper
NEW! smart matching with writer

The play is based on a tragic love story, it is about a young boy called Romeo and a young girl called Juliet, and they fall deeply in love with each other and soon find out after that there family have huge grudges about each other. Juliet says, “My only love sprung from my only hate”, she is saying how she loves Romeo but they cannot be together because of the huge grudges between the two families.

Act 1 Scene 5 has a very different setting to the previous scenes; it is in contrast with the fighting scenes and then a peaceful scene.

Act 1 Scene 1 included a huge amount of fighting and soon hatred between the 2 families; this built up tension and got the audience excited for the meeting of Romeo and Juliet. In Act 1 Scene 5 it has a very peaceful setting until Romeo enters the party, tybalt is angry that Romeo is at his uncles party by Tybalt showing his anger it builds up tension for when Romeo and Juliet meet.

Capulet is angry at tybalt for interrupting his party by him and Romeo arguing so Capulet tells him off ” Go to, go to; you are a saucy boy: it’s so, indeed? This trick may chance to scathe you, I know what: You must contrary me! Marry, ’tis time. Be quiet, or–More light, more light! For shame! I’ll make you quiet. What, cheerily, my hearts!”

The opening scene in the play has a biog affect on the audience because it is setting the Scene for the princes speech. the price is trying to get across that the two families ( Capulet and montages) should stop fighting and live their lives in peace or they will be punished ” put your bloody weapons to the ground” he says this to try and stop the fighting in his country and if it is not stopped they will be punished.

The audience’s expectations of Act 1 Scene 5 are that it will be a romantic scene because it is the Scene when Romeo and Juliet first meet; there is a huge amount of tension built up in this Scene because the audience know they will fall in love at first sight.

Capulets speech settles down the audience by him being very happy towards everyone and very peaceful. This makes the audience settle down because their will be a big dramatic scene soon when Romeo and Juliet meet “Welcome, gentlemen! Ladies that have their toes. Unplagued with corns will have a bout with you” this is how the audience is settled down by them thinking it is very calm and peaceful and like nothing is going to happen that is dramatically effective.

Capulet is in a very good mood and being nice to everyone, Shakespeare has done this to settle down the audience so they are ready for the dramatic scene when Romeo and Juliet meet. the way in which Capulets speaks is in contrast with the way in which Romeo speaks because he is saying how beautiful Juliet is and how much he wants to be with her “O, then, dear saint, let lips do what hands do; They pray, grant thou, lest faith turn to despair.” Romeo is saying how much he wants to be with her and he wants to kiss her and show his affection he has for her and he wants her to kiss him if she feels the same way.

tybalt is very angry that Romeo a Montague is at a Capulets party and wants to remove him from the party, ” It fits, when such a villain is a guest: I’ll not endure him”, tybalt wants to hurt Romeo for being at his uncles party and wants to throw him out, this affects the audience because it is very dramatic and builds up a huge amount of tension because they don’t know whether they will fight or will just carry on with the party. At this point the audience will also be very excited to see whether Romeo and tybalt fight. Tybalt speaks very angrily and rough which shows his hatred towards Romeo “This, by his voice, should be a Montague. Fetch me my rapier, boy.” this quote shows that tybalt wants to fight Romeo and wants to hurt him, but Romeo speaks very calmly in contrast to tybalt “O, she doth teach the torches to burn bright!”, Romeo is showing his true feelings for Juliet and is very calm when tybalt is shouting at him. This is very dramatically effective because is shows the difference between a Montague and a Capulet and they go about their business (Tybalt shouts and scream) (Romeo very calmly speaks) this is effective towards the audience because they find out how the two characters react around each other.

Capulet is very angry at tybalt fore bringing attention to himself and is told off for doing so, “he shall be endured: what Goodman boy! I say he shall: go to….” this quote is humorous for the audience because tybalt a grown man is being shouted at by his uncle so this quote is dramatically effective in the way of humour.

when Romeo and Juliet meet their will be a huge amount of built up tension ready to explode which is caused by the previous scenes when Romeo is love sick and the audience know it will soon change when he meets Juliet. Juliet says previously “I look to like, if looking liking move. But no more deep will I endure mine eye” she is saying if she sees someone she likes then she will be with him, by Juliet saying this the audience know when her and Romeo meet they will fall deeply in love with each other.

When Romeo first sees Juliet he cannot believe how beautiful she is “O, she doth teach the torches to burn bright! It seems she hangs upon the cheek of night like a rich jewel in an Ethiopia’s ear; Beauty too rich for use, for earth too dear!

So shows a snowy dove trooping with crows, As yonder lady o’er her fellows shows.”, this quote shows how Romeo feels about Juliet and Juliet also cannot believe how beautiful Romeo is ” Go ask his name: if he be married. My grave is like to be my wedding bed.” this quote also shows Juliet’s true feeling for Romeo and that they both should be together.

When Romeo and Juliet first start speaking to each other they talk in a sonnet Romeo says “have not saint lips and holy palmers too?” Juliet then says ” Ay, pilgrim, lips that they must use in a prayer” they are speaking in a sonnet to show their true love for each other and that they are meant to be (star crossed lovers). It shows that Romeo’s love for Juliet is more genuine than his love for Roselyn. This is very dramatic for the audience because it shows true love and is very romantic so they get excited for when the meet again, it will also give the audience an image in their head of how Romeo and Juliet are looking at each other.

When Romeo finds out that Juliet is a Capulet he is devastated and doesn’t know what to do and the same goes for Juliet when she finds out Romeo is a Montague Juliet says “O Romeo, Romeo! Wherefore art thou Romeo? Deny thy father and refuse thy name; Or, if thou wilt not, be but sworn my love, And I’ll no longer be a Capulet.” she is saying she loves Romeo and wants to be with him so bad she will remove her name so they can be together, this Scene will have a very dramatically effect on the audience because it is sad for them because two lovers cannot be together because of their families hatred for each other. In this scene Shakespeare has left it like a cliff-hanger so it builds up tension because the audience don’t know what is going to happen next. By Shakespeare doing this it builds up a huge amount of tension and makes the audience want to know what happens next so is dramatically effective in that way.

The scene is crucial to the rest of the play because it sets the scene for what will happen later on in the play. This builds up tension and makes the audience on edge and wanting to know what will happen next, so is dramatically effective in the way of a cliff hanger.

love and hate is still important with play nowadays because it is very effective because all audiences like to see a romantic scene so it makes the play more exciting, and also using hate as a theme creates tension and is exciting because the audience never know when their is going to be a fighting scene or whether it will be a nice romantic scene so is very unpredictable and never dull for the audience.

Shakespeare uses many different types of language in this play for example he uses a huge amount of descriptive writing Romeo says “She speaks, speak again, bright angel! for thou art as glorious to this night, being o’er my head as is a winged messenger of heaven unto the white-upturned wondering eyes of mortals that fall back to gaze on him when he bestrides the lazy-pacing clouds and sails upon the bosom of the air.” it uses very descriptive language to describe how Romeo feels about Juliet. the play also includes lots of similes and metaphors for example when Romeo says “It is the east, and Juliet is the sun” Romeo is comparing Juliet to the sun and how she is beautiful and shines so bright, shines brighter than all the rest. 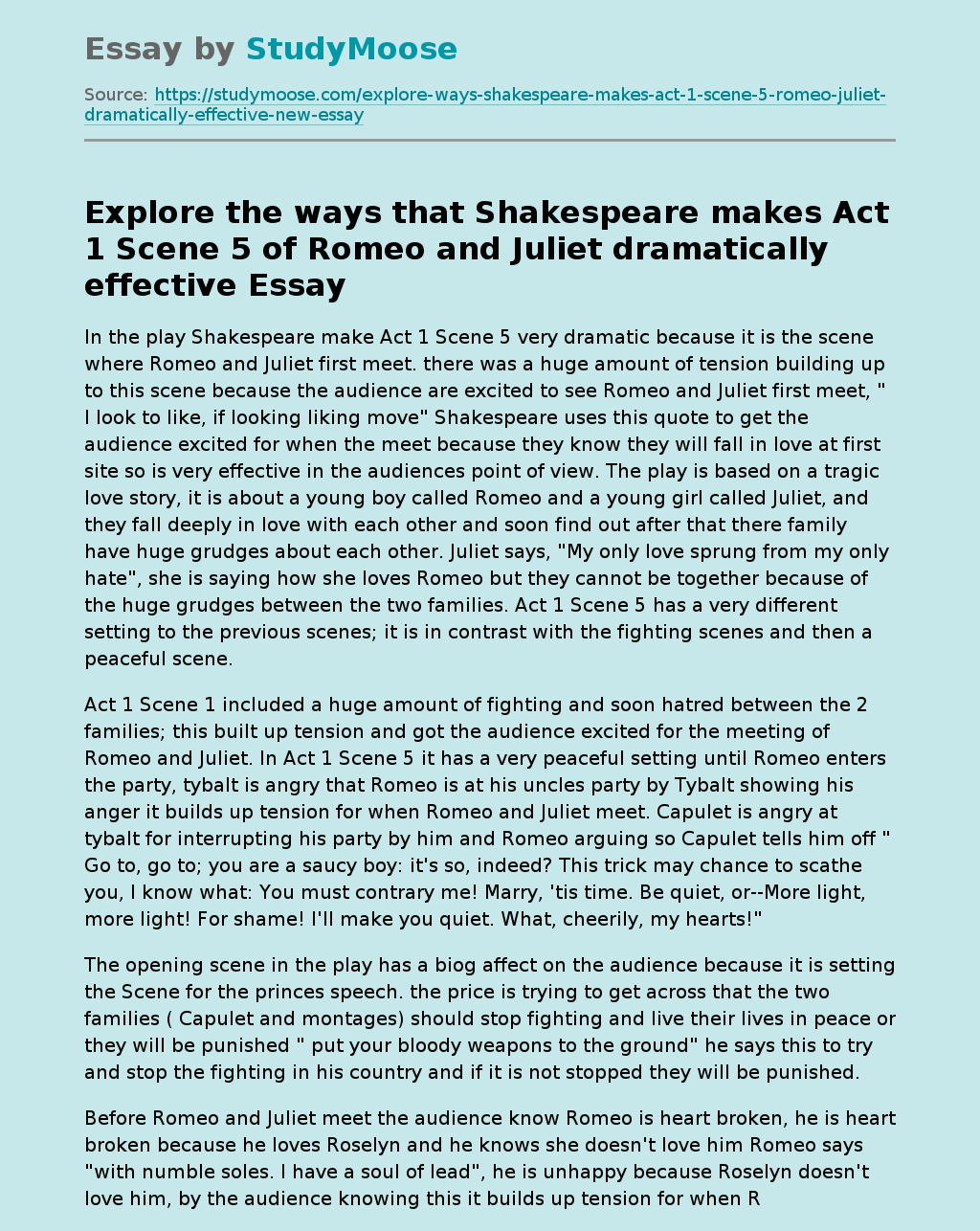