This play “Romeo and Juliet” is quite a famous one written by Shakespeare. The story is, of course, about a pair of star-crossed lovers. It is about two families which are at the same status who live in Verona. They got involved in an argument, and the whole town got dragged into it. These families were called “the Montague’s” and “the Capulet’s”. If they were to just see each other in the street there would be either a fight or an argument.

Don't use plagiarized sources. Get your custom essay on
“ Explain in detail how you think Shakespeare builds up tension and excitement in “Romeo and “Juliet” Act 3 Scene 1 ”
Get custom paper
NEW! smart matching with writer

Juliet’s father throws a party he invites all his friends. The Montague’s are not invited, but Romeo makes a plan to get a look at Rosaline; a girl who he had fallen in love with… He disguises himself and slips into the party. Once inside, his attention is stolen; not by Rosaline, but by Juliet. Romeo falls instantly in love, but is disappointed when he finds out that Juliet is a Capulet. Juliet notices Romeo too, but she is unaware that he is a member of the hated Montague’s.

So Romeo and Juliet decided to get married because as soon as they were married no one could do anything about them seeing each other.

In Act 3 Scene 1, two of Romeo’s friends, Benvolio and Mercutio, are walking through the streets of Verona and they bump into Juliet’s cousin, Tybalt. Tybalt is out to get Romeo for crashing the Capulet’s party so he starts a fight with his friends, when Mercutio and Tybalt are speaking there words and there actions build up the tension and excitement.

When Romeo shows up the tension relieves, he doesn’t want to fight Tybalt because he no longer holds a grudge against Juliet’s family. “I do protest, I never injured thee, But love thee better than thou canst devise, Till thou shalt know the reason of my love; And so good Capulet,-which name I tender as dearly on my own,-be satisfied”

What Romeo is saying here is that he loves the Capulet’s as much as himself. But saying all of this was winding Tybalt up, the tension started building up in the audience then as they didn’t know whether Tybalt was going to kill Romeo.

Romeo’s friends can’t understand why he won’t stand up for himself so Mercutio steps in to do it for him. They both have a verbal fight first the audience were expecting them to go into a physical one but didn’t know when; they try to win the verbal battle before any physical one starts. Mercutio tries to upset Tybalt in various ways as his name is easy to make jokes about, he first plays on his name “King of cats”, people used to call their cats Tybalt.

This scene has lots of patterns and wordplay. A lot of it is from Mercutio. The language changes quite a lot during the play, different words have different meanings e.g. “thou/thee” is informal, and disrespectful, “you” is formal and more respectful.

The language nowadays has changed since Shakespeare’s time, in the 16th century they would understand this as they were used to it, but today it needs spelling out.

Romeo intervenes in the fight, but this gives Tybalt the chance to stab Mercutio under Romeo’s Arm., but he pretends it is only a scratch and jokes around about it, but the audience all know it is more then just a scratch.

On one of his lines he says “ask for me to-morrow, and you shall find me a grave man”; Mercutio knew he was going to die, the audience also knew that he was but the characters had no idea. He blamed Romeo for his death, he said he had got in the way, Mercutio is mortally wounded and curses the Capulet and the Montague families with “a plague on both houses.”

Romeo was then furious with Tybalt and he wanted to fight him until death, he forgot that if anyone of the two families killed someone then they would die their self. A poem is found in Romeo’s challenge to Tybalt, “…for Mercutio’s soul

Is but a little way above our heads,

Staying for thine to keep him company

Either thou, or I, or both must go with him.”

The language here highlights his anger.

As Romeo was so furious he killed Tybalt, know the tension was building up as the audience didn’t know whether Romeo was going to be sent to death.

Romeo then runs away as he is scared of what will happen to him.

When the prince come the excitement started building up aswel.

When the prince comes Benvolio tries to paint Romeo in a good light.

But straight away Lady Capulet wants revenge as she was upset and angry, she told the price not to rust Romeo as he was a friend of Montague, “Romeo slew Tybalt and Romeo must not live”.

The prince Spares Romeo from a death penalty, but banishes him from Verona (and Juliet) on pain of death. In every age, young people have fallen in love against their parents wishes. Still today there are clashes between families, cultures and societies e.g. racism, societies at war. In the end the play is about…how hatred can lead to disaster, how youthful haste and passion can lead to disaster, bad luck can spoil everything and how our lives are determined by fate.

Explain in detail how you think Shakespeare builds up tension and excitement in "Romeo and "Juliet" Act 3 Scene 1. (2020, Jun 02). Retrieved from http://studymoose.com/explain-detail-think-shakespeare-builds-tension-excitement-romeo-juliet-act-3-scene-1-new-essay 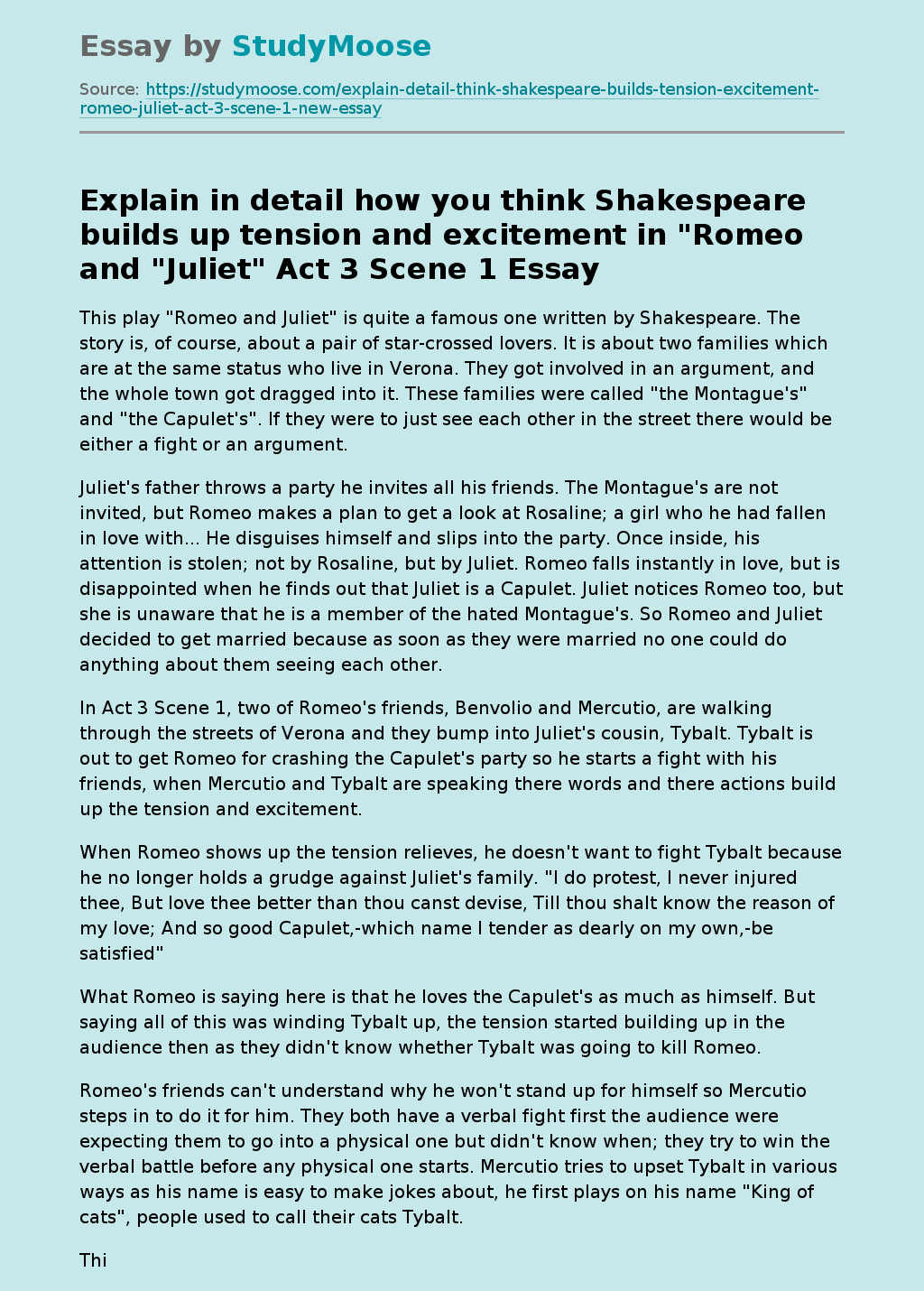