In act 4, scene 3, how does Shakespeare create dramatic tension as Juliet considers her decision

Romeo and Juliet was wrote by William Shakespeare, it is about two family’s, the Montague’s and the Capulet’s, who have violent differences and don’t get on. Juliet “who is a Capulet’s” is told by her father that she is to marry Paris but not long after this she meets Romeo “who is a Montague” and they both fall in love, not long after they both secretly get married. Tybalt “Juliet’s cousin” kills Mercutio “Romeos best friend” then Romeo kills Tybalt and is banished from Verona.

Don't use plagiarized sources. Get your custom essay on
“ In act 4, scene 3, how does Shakespeare create dramatic tension as Juliet considers her decision ”
Get custom paper
NEW! smart matching with writer

Juliet is told she must marry Paris so she decides she must run away with Romeo, so she takes a poison so that her family thinks she is dead and puts her in the tomb. A letter was meant to be sent to Romeo telling him about the plan but he did not receive it and thinks she is dead. He goes too the tomb and kills him self next to Juliet then she wakes up and sees Romeo is dead so then she kills her self.

Then when the Montague’s and the Capulet’s find out what has happened they sort out the differences and make up.

I think William Shakespeare wrote this story as a deep emotional drama, as there is very little comedy but lots of violence and romance; he keeps the audience attention by allowing a lot to happen in the story so it does not get boring, and to keep the audience intrigued. Also he makes the audience feel sorry for Romeo and Juliet and this gets the audience emotionally involved.

I think he wrote this story to show how powerful love is, and that people would die for love. William Shakespeare chooses love as his theme in my opinion this is a really good theme to choose as love is one of life’s most essentials, every one can feel involved, maybe because then can relate to it in some way or another, but also a love story can be very emotional and this helps get the audience involved and feel for the characters and due to this the story seems more realistic.

William Shakespeare chooses his characters very wisely as Romeo seems like the kind of person who is in love with being in love but still very much a immature youth and Juliet is the kind of girl who has never thought about getting married or being in love and does any thing that pleases her parent like marry Paris. William Shakespeare chooses the characters to meet and see love at first sight; to the audience this was unexpected so this helps keeping the audience wondering what is going to happen due to this he manages to keep the audience interested. William Shakespeare makes the scene were they meet like a fairy tale the way its love at first sight, as if it’s meant to be. I think Romeo and Juliet is aimed more at a modern teenagers this is because most teenagers and think love does happen like this all the time and it’s the type of story that you can day dream about it actually happening to yourself. The context is written in old English in the Elizabethan times.

The relation ship or Romeo and Juliet, in my opinion is very unexpected, the audiences first impression of Juliet is that she is a obedient child who just wants to please her parent, this is because in act one scene 3, Juliet’s mother asks her if she would marry Paris she says “it’s a honour that I dream not of” this shows the audience she is very young and never thought about marriage, but she also says “I’ll look to like, if looking liking move, but no more deep will I endart mine eye than your consent gives strength to make it fly”, this shows the audience that she is obedient as she will marry Paris and try to like him because her parents want her to. When Juliet meets Romeo we see a sudden change in her as earlier one see seemed like a very innocent, timed young child, and when see meet Romeo she is flirting with him and kisses him “Then have my lips the sin that sin that they have took” this shows the audience a sudden change in her and that there is something between them, in my opinion it is as if she has been hiding behind a innocent, timed young child and when she meets Romeo she feels confident enough to let her true self out, as if she has been so protected and now she is starting to rebel.

In act 4 scene 3 the audience experiences a complete change in Juliet as she talk responsibility for her own life and does not do what her parents want her to, she follows her heart and makes her own chooses. She starts to take responsibility for her own life and is willing to loose her family and security she has always known, “Farewell!!! God knows when we shall meet again. I have a faint cold fear thrills through my veins that almost freezes up the heat of my life, I’ll call them back again to comfort me.

In act 4, scene 3, how does Shakespeare create dramatic tension as Juliet considers her decision. (2020, Jun 01). Retrieved from https://studymoose.com/act-4-scene-3-shakespeare-create-dramatic-tension-juliet-considers-decision-new-essay 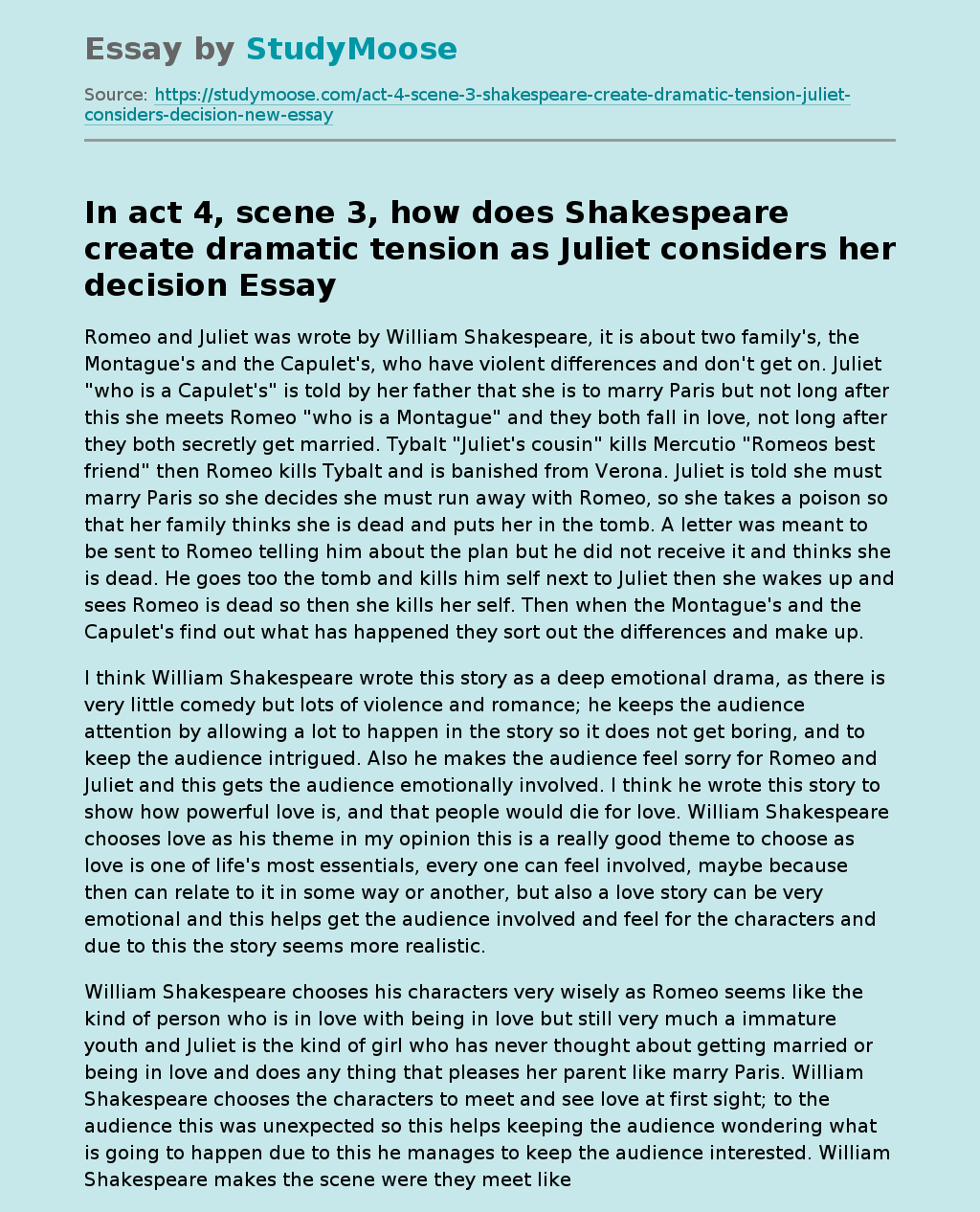