The master that I chose is Sun Pu-erh. Since her troubles with attaining the Tao were that she thought she was a genius from the beginning and needed very little meditation and principle to attain the Tao. But she learned down the road that there is no such thing as knowing too much. She has shown the most perseverance to attain the Tao, by even scaring her face so that she could travel to a village so she could attain imortality faster.

Her travels and hardships were very interesting to read and kind of reminded me of my troubles with my studies.

After Sun Pu-erh and Ma Tan-yang – her husband, were accepted as students of Wang Ch’ung-yang, they were instructed to meditate as much as possible and attain the enlightened path to the Tao. This task was assigned to the new students to rid themselves of the temptations of the world. This included sickness of spirit and body, the craving of liquor and sex, the desire for riches, bad temper and all other sorts of temptations.

If these temptations can not be eradicated the path to the Tao will be much harder and will take a lot longer to accomplish, even though time is not of the essence when it comes to becoming an immortal being. With this great advice from their master they decided to start meditation, but since they were now brothers in the Tao, they could not share sleeping quarters because it would bring on the temptation for sex.

So, Ma Tan-yang ordered the servants from his house to clean out a room for his wife where she would live from now on.

Once they were settled in their different rooms, Sun Pu-erh began to meditate from the instructions she attained from her master. During her meditation master Wang Ch’ung-yang came into the room and frightened Sun Pu-erh, he told her “the yin cannot manage without the yang” (Wong 47). The little conversation she had with the master annoyed her very much so and she decided to run out of the room and get her husband. When her husband arrived at her room, there was no one inside.

This fact astonished Sun Pu-erh and upset her husband who was in a deep conversation with the Master. Another month passed before a second visit from Wang Ch’ung-yang happened. This time he told her that her way of training was a dead end, and that she was wasting energy. Her brother in the Tao explained to her that the master’s spirit visited her to help since she was straying further away from the true path. The Tao is limitless, when you think you have learned everything about it, you have lost it. (Wong 53)

A few days passed and Ma Tan-yang decided to attend the birthday party of an aunt in a nearby town. He asked his wife to come along, but she faked sick so she can be alone with the master and try to gain some knowledge from him. She found Wang Ch’ung-yang meditating in the meditation hut behind their mansion and asked him for some advice concerning attaining immortality. The master told her of three different ways to attain the Tao. Then asked her which does she choose to pursue, Sun Pu-erh answered that she would take the hardest path. This answer astonished the teacher, who tried to make Sun Pu-erh back out of this plan since it was fastest but also the hardest one to complete.

If she would want to complete the path with this method she would need to travel to the city of Loyang, where the power to cultivate the mind is strong and the Gods have marked this place as one of the spots where an immortal shall rise. Before she was able to leave, Master Wang Ch’ung-yang told her that the trip would be long and arduous, and she would be molested by men because of her good looks. So to fix this problem, she went into the kitchen and let some of the smoldering cooking oil touch her face. This quickly fixed the problem, and created lots of boils and scars on her face – she was pretty no more. The master was pleased with the how far one of his students would go to attain the Tao.

Once she reached the town, she begged on the streets for food and shelter. She received little, so Sun Pu-erh was forced to look for shelter on her own. With her luck she found an abandoned house. There she stayed for 12 years meditating and cultivating her Yin and Yang. People occasionally made fun of her or thought that she was stupid and they would be able to take advantage of her, but these small distractions didn’t bother her. Once Sun Pu-erh attained immortality she thought that she should play games with the town’s people. So she turned two tree branches into a man and a woman who fondled each other, laughed and caused all sorts of problems for the town. The officials of the town became angry with this and decided to banish the couple.

Their attempts were unsuccessful so they decided to burn down the house where these two people were seen heading to at night. Wood was gathered around the house and it was set on fire. The smoke turned thick and then instantly a cloud appeared on which Sun Pu-erh and the two people stood on. The crowd was both scared and amazed by the witch’s doings. Sun Pu-erh explained to the town’s folk, that she was a follower of the Tao and chose this town as her learning ground. She has attained the Tao here and will now ascend to the immortal realm of heaven. Her way of saying thank you for the kindness and hospitality which she received, she transformed the wrongdoing couple back into their real form of a two branches. These branches were said to bring good luck to the town and prevented famine, drought or anything else bad to happen to the town. Prosperity reigned for this town and a monument was erected where her house once stood. (Wong 121)

In China, the fifth century is the age of the birth of Taoism (Lao-tse, 604-531 B.C.) and Confucianism (Confucius, 551-479 B.C.), whose ideas are very close to some of the Indian concepts. The great system of Tao, which tries to follow the natural movement of the universe, originally appears to be based on a poetic version of the concepts of the Samkhya and of Yoga. The words Yin and Yang correspond to Yoni and Linga. Breathing practices and the search for the sun and moon in the body recall Ida and Pingala, the lunar and solar paths of breath in Yoga. The sexual practices (withholding the spermatic essence and trying to absorb the feminine essence) are identical to those of Yoga. The notion of immortality conceived as transmutation, in which “astride a white cloud the Sage or Yellow Emperor arrives at the region of the gods,” is analogous to that of Shaivism.

From my viewpoint, Sun Pu-erh had one of the hardest times attaining the Tao. The rest of the followers had an easier time. Besides Ch’iu Ch’ang-ch’un, who also had the toughest time, and came very close to suicide because of the fortune teller. Sun Pu-erh struggles involved getting over the fact that she doesn’t know everything and if she would want to learn more.

Her pride would have to be taken out of the picture. Once her master told her of a place where to learn, but didn’t allow her to go since she would be violated because of her beauty. Willingly she mutilated her face because of her desire to learn. I truly admire someone with so much will power to alter their appearance just to learn something. The Tao teaches to forget about all worldly possessions, so I suppose degrading your face is just one of the tests that come along the path. 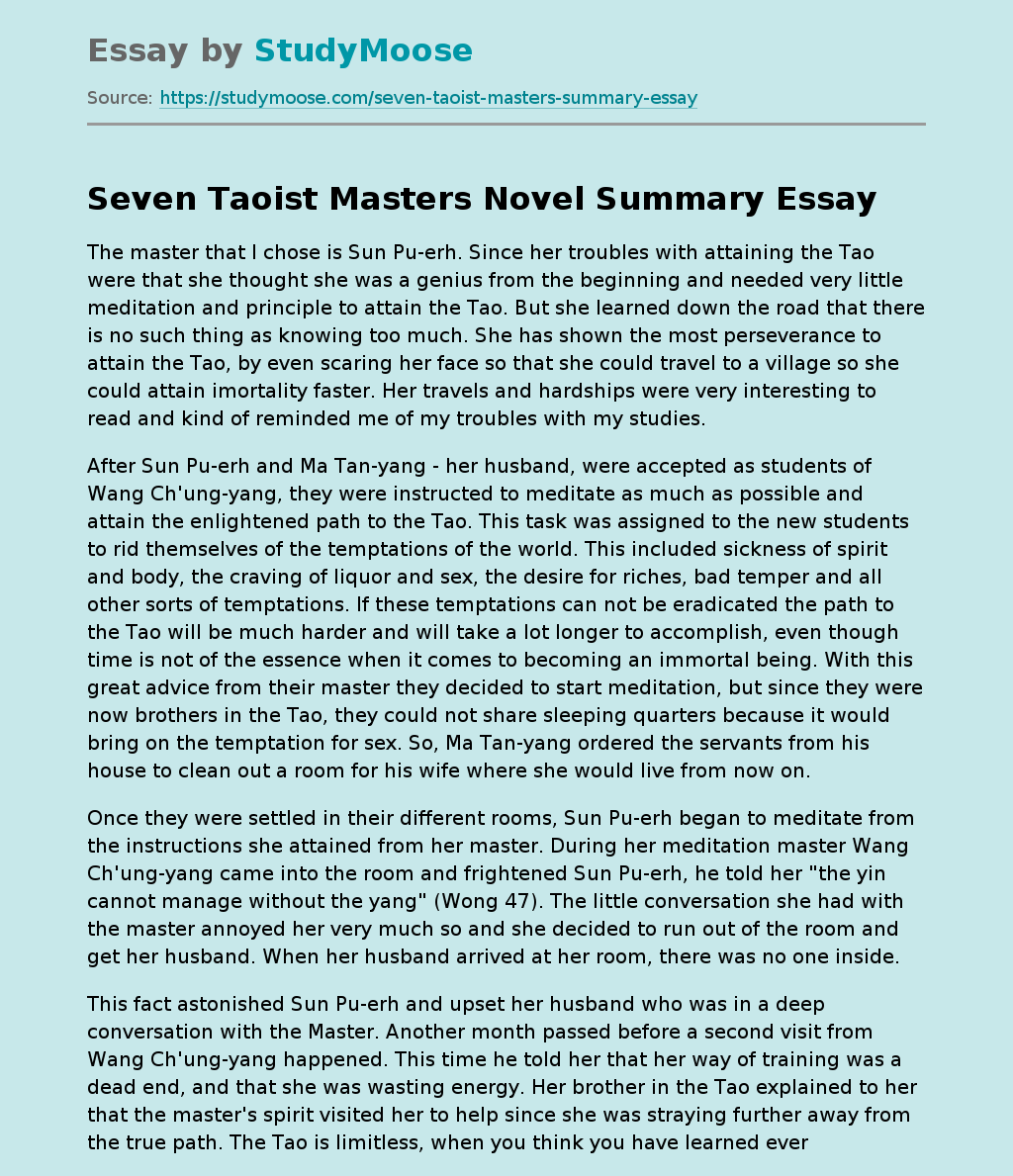