Serial killer in the United States

Aileen Carol Wuornos is known as the first female serial killer in the United States. Her name will be forever branded for the infamous crimes she committed as well as her violent, outspoken persona, which have been documented in newspapers, docudramas, and a feature film. This essay will discuss the biological theory and the social control theory to explain the causation of Aileen Wuornos’ crimes. Abandoned by her teenage mother and father, Wournos and her older brother were adopted by her maternal grandparents in 1960 where she lived in an environment plagued with neglect and abuse.

Don't use plagiarized sources. Get your custom essay on
“ Serial killer in the United States ”
Get custom paper
NEW! smart matching with writer

During her elementary school years, a teacher recognized Wuornos’ inability to hear during class. When the potential existence of a disability was brought to the attention of her grandmother, it was ignored. Former neighbors testified in a 2001 appeal hearing that Wuornos was beaten by her grandfather, a heavy drinker, and she regularly abused LSD, marijuana, alcohol and mescaline. One witness stated he had sex with Wuornos, on various occasions, when she was only 10 years old.

She was known amongst her peers for trading sex for money, drugs, and alcohol during her preteen and teenage years. In 1969, Wuornos’ father, a convicted pedophile and sociopath, hanged himself in prison. It was then Wuornos learned that her maternal grandparents were not her biological parents. She then began to exhibit a violent temper (she attempted to stab her siblings on separate occasions) and frequently carried a knife while hitchhiking locally. At age fourteen, Wuornos became pregnant and claimed her brother fathered her child.

After putting her son up for adoption in 1971 (and after the death of her grandmother later the same year), Wuornos’ and her brother became wards of the state of Michigan. Before completing her freshman year, Wuornos dropped out of high school. Although she returned after the birth of her son, she dropped out again at age 17. Within two years, her brother and grandfather died; she had married and divorced (within 30 days) a 69 year old man; and began her life as a hitchhiking prostitute across the United States.

Between 1974 and 1986, Wuornos’ illicit crimes escalated from prostitution to include disorderly conduct, disturbing the peace, drunk driving, assault, shoplifting, trespassing, armed robbery, breaking and entering, forgery, resisting arrest, unlawful possession of a firearm, and theft. She traveled from her birthplace, Rochester, Michigan to Colorado, back to Michigan and hitchhiked to Florida, where she continued to prostitute along the Florida highways. In 1986, she met and entered into a lesbian relationship with Tyra Moore.

The two traveled together for four years while Wuornos continued to prostitute and rob the men she solicited. Between 1989 and 1990, Wuornos killed six men (possibly seven), all of whom she claimed she killed in self-defense. Wuornos contended that all of her victims had sexually assaulted her during their encounters. The personal belongings of several victims were pawned, and Wuornos stole all of the victims’ vehicles, later abandoning them. She was caught in January of 1991.

While imprisoned, Wuornos was diagnosed with Borderline Personality Disorder (BPD) by a prison neuro-psychologist. This diagnosis, coupled with her possible undiagnosed hearing problem, could classify Wuornos as disabled. Untreated for BPD with the addition of years of drug and alcohol abuse, physical and sexual abuse and abandonment shaped Aileen Wuornos’ personality and character. She was executed on October 9, 2002 and cremated. From a biological perspective, theorist Lombroso recognized a genetic connection between the brain and a person’s predisposition to act out deviant behavior.

He also maintained that regardless of the social factors which existed in a person’s environment, a person was “born” to be a criminal. Biocriminologist Clarence Ray Jeffery maintained that the biological theory of crime causation makes certain basic assumptions which include the direct neurological link between the brain and behavior. Aileen Wuornos was born with a mental disorder, most likely inherited from her father. In addition, she was genetically predisposed to impulsivity, violent temperament and deviant behavior.

Conversely, Michael Edmund O’Neill upholds the belief that the connection between the brain and behavior is taken for granted. He supports his argument by stating the difficulty in recognizing and creating a connection between biology and action. Furthermore, he believes behavior can be the source of an array of causes and, equally, many factors can cause a collection of behaviors. However, there is an overwhelming amount of evidence which suggests that, when abuse – specifically violent maltreatment – of a child exists, the child becomes an abuser.

Serial killer in the United States. (2020, Jun 02). Retrieved from http://studymoose.com/serial-killer-united-states-867-new-essay 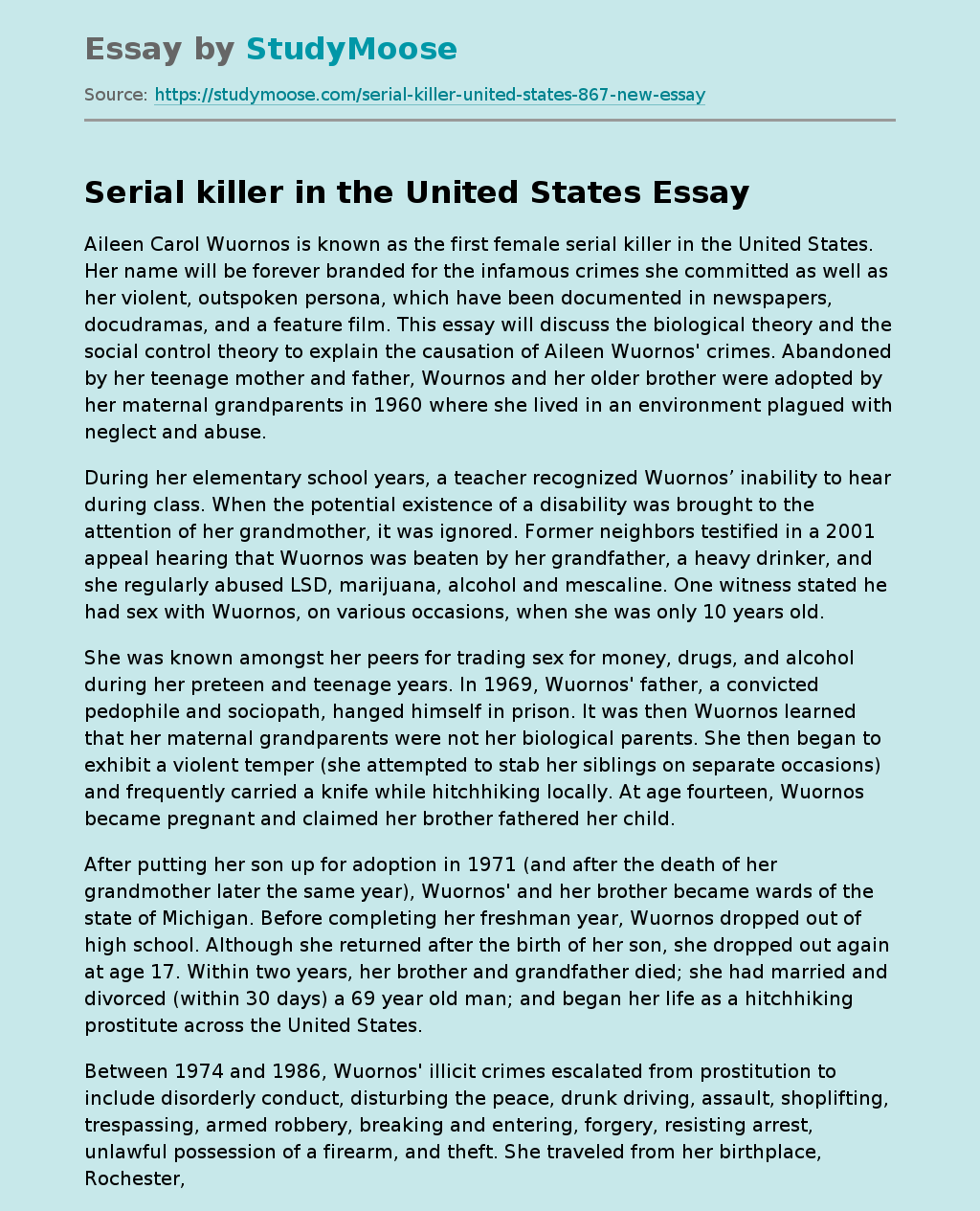