Lady Macbeth is a Killer

Throughout the play, Macbeth by William Shakespeare, it is clear that Lady Macbeth is the mastermind behind Macbeth’s killings and is responsible for all the death and damage caused by Macbeth. It is shown from the start that Lady Macbeth manipulates and controls Macbeth because of her ambition and greed for power. The first time this is shown in the story is when Lady Macbeth convinces her husband to do whatever is obligatory to seize the crown. Her greed of power had overcome her judgements and she would not stop until Macbeth had killed King Duncan and taken over the job of being King himself, showing that Lady Macbeth is more responsible for the death of King Duncan than her husband.

Don't use plagiarized sources. Get your custom essay on
“ Lady Macbeth is a Killer  ”
Get custom paper
NEW! smart matching with writer

It is also seen throughout the play that Lady Macbeth is not the purest character in the story as she becomes cruel and evil to her husband and immediately jumps to the conclusion of killing whoever was to get in their way from being king and queen of Scotland.

Lady Macbeth is introduced to the story when she is reading a letter from her husband Macbeth. The letter describes Macbeth’s interaction with three witches who told him he would become the Thane of Cawdor, then the king of Scotland. After hearing the promising predictions from the witches, Macbeth shares the news with his wife. Lady Macbeth immediately becomes nervous he wouldn’t be able to do what needed to be done and felt the need to take control of the situation.

Putting the responsibility on herself, Lady Macbeth has to convince her husband to kill King Duncan. Without Lady Macbeth becoming outraged after Macbeth started to reconsider, calling him a coward and questioning his manhood “When you durst do it,” she says, “then you were a man” (Shakespeare1.7.56) Macbeth may have never killed Duncan or the others. Lady Macbeth takes reasonability for the killing when she becomes ruthless in her ambition, almost forcing Macbeth to kill Duncan for telling her husband that if he cannot do it she would have to do it herself. Macbeth becomes thirsty for blood and plans on killing all threats who may get in his way. All the murders that he commits throughout the play are driven by the first one that Lady Macbeth convinced him to do. Lady Macbeth is also the one who sets up and stages the crime scene just making her guiltier of the crime.

It is obvious that Lady Macbeth is more evil than her husband when she manipulates Macbeth to kill in the beginning of the play by telling him she will not sleep with him until he does what she has asked him to do. She uses Macbeth’s lack of masculinity against him and threatens to end their relationship if he does not kill “And to be more than what you were, you would be so much more than a man” (Shakespeare 1.7. 57). Knowing her husband’s weakness, she plans the murders herself, drugs the guards, and places the daggers ready for Macbeth to do the deed proving the fact that if Macbeth couldn’t follow through with the killing, she would do it herself. Lady Macbeth is not only evil but she is manipulative, compulsive, and controlling of her husband, making her even more evil than Macbeth ever was. It is shown in the play that Macbeth had no intentions to listen to the witch’s prophecies until his wife became involved. Whereas once Lady Macbeth found out, she immediately says he needs to kill King Duncan and become king.

The crimes did not stop at killing King Duncan. Macbeth killed his former best friend Banquo and Banquo’s son Fleance so there was no way anyone could take the crown from him. After multiple killings, Lady Macbeth becomes “guilty” for all the crimes that they commit when in reality she becomes fearful of what her husband is and may be capable of doing. She soon realizes that her control over Macbeth has resulted in a downward spiral for her husband and she may be next. Lady Macbeth realizes that if she hadn’t forced Macbeth to kill in the beginning that he may have never done it. Once Macbeth starts killing off his friends, Lady Macbeth’s guilt and fear starts to get the better side of her and she starts to sleepwalk during the night. Lady Macbeth realizes that she is just as responsible as her husband and starts to persistently wash her hands to get the imaginary blood off “Here’s the smell of the blood still.” (Shakespeare 1.5 54). Her guilt proves not only that she has taken responsibility for the killings but that she is even more to blame for the deaths than Macbeth. Lady Macbeth’s influence on Macbeth had made him a stone-cold killer and she fears for her own life resulting in her killing herself before he could kill her.

William Shakespeare’s tragic play, Macbeth, reveals the power of words when it comes to the relationship between Lady Macbeth and her husband Macbeth. Macbeth is persuaded by the ambition of his wife and is forced into killing King Duncan to gain the crown of Scotland. Lady Macbeth manipulates her husband by questioning his manhood and overriding all of his objections until he has done the deed. When Lady Macbeth is introduced in the story, she is immediately ruthlessly planning the murder of King Duncan by taking on the responsibility and saying that if she was a man, she would kill King Duncan herself. Lady Macbeth’s evil boldness throughout the play effects not only her husband’s actions but results in her guilt and fear of her husband that eventually leads her to taking her own life.

Lady Macbeth is a Killer . (2021, Mar 18). Retrieved from https://studymoose.com/lady-macbeth-is-a-killer-essay 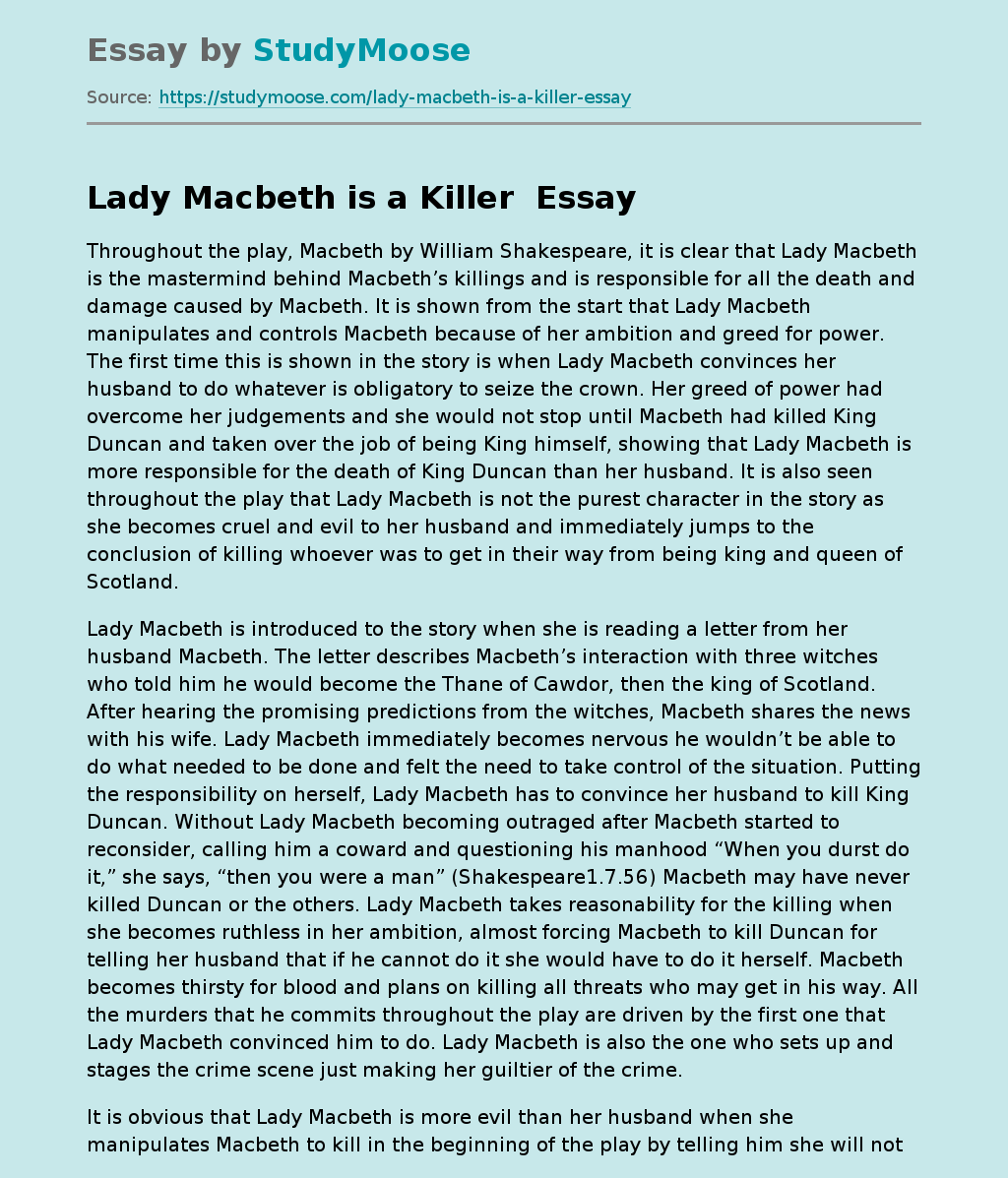