The Self-strengthening Movement (1860-1894) was also named “Yang-Wu Yun-Tung” by the Marxist historians. It is because the movement did not strengthen China and it depended too much on the foreigners. All the reform programmes just imitated the West. In the upcoming paragraphs, we are going to discuss the causes and failure of it, and how its failure affected China up to 1912.

It has been said that the Self-Strengthening Movement was a response to the West. The repeated defeats which China suffered from the 1st and 2nd Anglo Chinese Wars convinced the Qing Court Officials that the western powers were not barbarians.

Don't use plagiarized sources. Get your custom essay on
“ Self-strengthening movement ”
Get custom paper
NEW! smart matching with writer

Instead, their weapons were very superior. And the foreign powers have been kept seeking advantages and privileges from China. As a result, China has to strengthen herself in order to resist foreign aggressions. To a large extent, it explains why the Self-strengthening Movement is military oriented.

As a matter of fact, the signing of the peace treaties and the peaceful withdrawal of army from Peking showed that the foreign powers had no intention of conquering whole China. They even helped China to suppress the internal rebellions by sending the Ever-victorious Army. The well organized structure and hi-tech weapons fascinated the Chinese officials such as Li Hongzhang, one of the Movement leaders. Convincing the Chinese should carry out military reforms. Moreover, the foreign powers adopted to co-operative foreign policy at the mean time.

The sincerity of the western diplomats in China also showed the friendliness of the foreigners.

For example: Alcock, Burlingame and Robert Hart. It helped to ease the misunderstanding between China and the west.

The Self-strengthening Movement was also a response to internal rebellion. It is undeniable that the domestic rebellions were serious threat to the Qing Dynasty. By 1860, the domestic rebellions had come to a high tide with the advance of the Taipings. Throughout the 1860s’ and the early 1870s’, there were numerous rebellions appeared e.g. the Nien Rebellion and the Moslem Rebellion. Unlike the foreign powers, these rebellions aimed at destroying the Dynasty. This urged the Qing to strengthen the country’s military power to suppress the internal rebellions.

Despite the Self-strengthening Movement has been lasted for more than 30 years, it ended up in failure. In spite of how much effort they have been put in to the military reform programmes, it ended up in being defeated by the little Japan in the Sino-Japanese War (1894-1985). What were the causes of failure?

One of the reason for the failure of the Self-strengthening Movement was its reactionary character. The self-strengthening Movement was just used to suppress the uprisings of the common people and to preserve the Manchu rule. The Qing Court did not carry out the programmes with sincerity. Cixi took the reform funding for building her luxurious Summer Palace explains it. Nevertheless, it had little support from the people (e.g. the people thought the setting up of railway would upset the feng-shui). As a result, it failed.

The heavy reliance on foreigners also explains the failure. As the self-strengthening movement was a movement to imitate the western military technology, it is inevitable we need help from the western powers. However, the officials never think of training the Chinese to become the experts. They just kept on relying on the foreigners unreasonably, The Chinese assumed that all the foreigners were supermen, or all of them were experts. Ironically, there were foreigners who were basically iron workers being treated as scientists by the Chinese, just because they were foreigners. Besides, what makes you think that the foreigner would work for you sincerely? To reveal the truth, they just wanted to gain more political and economical rights in China.

Confucianism worked as a stumbling block for the modernization. In fact, all the leaders of the self-strengthening movement were well-educated with Confucianism. In their eyes, Confucianism was the universal truth and nothing should be changed about the Confucian social, economic and political order. Thus, they only adopted superficial reform programmes on military. Chang Chi-tung’s word, “Chinese learning as the fundamental, western learning as application” clearly exposed their attitude towards reformation. In the order words, the reform programmes were limited by psychological inertia.

Being bombarded by the Confucian studies, the reform leaders had no intention of reforming the social order. They did not ever realize that social reform was necessary for a country to become modernize. For example, they did not stress the importance of western learning. Besides, they had little idea of universal education which was the foundation for the strength of the west. The limited scope of the reform led to the failure of the Self-strengthening Movement. Being influenced by their confidence in Confucianism, the Chinese thought that the Chinese state and society was perfect and there should not be reform in this aspect.

Regionalism is one of the reasons that should not be left behind to explain the failure of the self strengthening movement. Within the reform programmes, there was hardly any co-ordination, nor co-operation. The local provincial leaders established some enterprises mainly for their self-interests. They regarded their achievement as the foundation of personal power. They had no idea in carrying reform in a national scale. As a result, piecemeal and effectiveless projects were carried out, and money was wasted. Therefore, the reform turned in failure.

Lastly, the failure of the movement was clearly shown in the defeat of Sino-Japanese War (1894-1895). It was actually ashamed of being defeated by the small, weak Japan. Especially the country has been undergoing a reform movement over 30 years. The failure of the self-strengthening movement inevitably posed serious influence to China in upcoming century.

The defeat of the Sino Japanese war (1894-95) reveals China’s incapability. After signing the treaty of Shimonoseki, the Scramble for concessions (1895-1890) came into effect. Knowing Qing Court’s weaknesses, the foreign powers started ripping China off. They claimed different parts of China as their sphere of influence and almost divided China up. For example, the Shangdong province was German Concession and Fujian was Japan’s sphere of influence. This showed the failure of the Self-strengthening movement once affected China’s sovereignty.

However, the failure didn’t stop the tide of reform movement. After the defeat of the Sino-Japanese war, the new intellectuals nurtured from the Self-strengthening movement started to reflect why the self-strengthening movement failed. Hence, the Hundred Days’ reform (1898) was brought up. Guangxu initiated the reform with the aid of two intellectuals – Kang Youwei and Liang Qichiao. Actually, Guangxu was trying to gain back the power from Cixi’s hand by the means of carrying out a reform. In other words, there was a power struggle between Cixi and Guangxu. At the end, the coup d’etat failed, and Guangxu was imprisoned by Cixi. Kang and Liang was able to escaped from China with the help of foreigners, and foreigners gave Cixi pressure to release Guangxu.

The empress dowager thought she was being constrained, and hence upset. Because of this, the anti-foreign feeling of Cixi aroused. It explains part of the cause of Boxer Uprising and Eight Power Expedition (Cixi supported the Boxers in the Boxers Uprising, in fact she has released an imperial decree stating her encouragement of destruction of any signs of foreigners. A reward system was even introduced. The foreigners were angered by this, and they sent a joint army to capture Beijing. Part of the summer palace was even burnt into ashes. ) This means the failure of the SSM indirectly led to Power Struggle and further destruction of China.

The Late Qing Reform (1901-1910) was regarded as a response to the Boxer Protocol which signed after the Eight Power Expedition. The Qing Court foreseen that a reform movement is urgently needed in order to prolong the Manchu rule. Therefore, the Late Qing Reform was initiated by the Qing Court themselves. However, the lack of sincerity of carrying out a reform was clearly shown in the reform projects. (E.g. the nine year constitution announced in 1908) discouraged the people and failed the intellectuals who hoped for fundamental reforms. This drove more and more people to the revolutionary side. (i.e. the Revolutionary party headed by Sun Yixian) Thus, the failure of SSM brought China into a revolution era.

The 1911 Revolution succeed with the mass support. (Suffering from the Late Qing Reform, the people no longer had fate to the Qing Court, therefore, people from different social background all seek for new leader i.e. the Revolutionaries. ) To conclude, the SSM contributed to the downfall of the Qing Court.

From above evidence, you can see that there was actually an unbreakable chain effects. (i.e. SSM ->Scramble for Concessions -> HDR -> Boxers’ Uprising & Eight Power Expedition -> Late Qing Reform -> 1911 Revolution -> Downfall of Qing Court) The failure of self-strengthening movement directly and indirectly raised the power of revolutionaries and led to the downfall of Qing Court. Hence, it is convinced the Self-strengthening Movement possess drastic affection to the China in the following century. 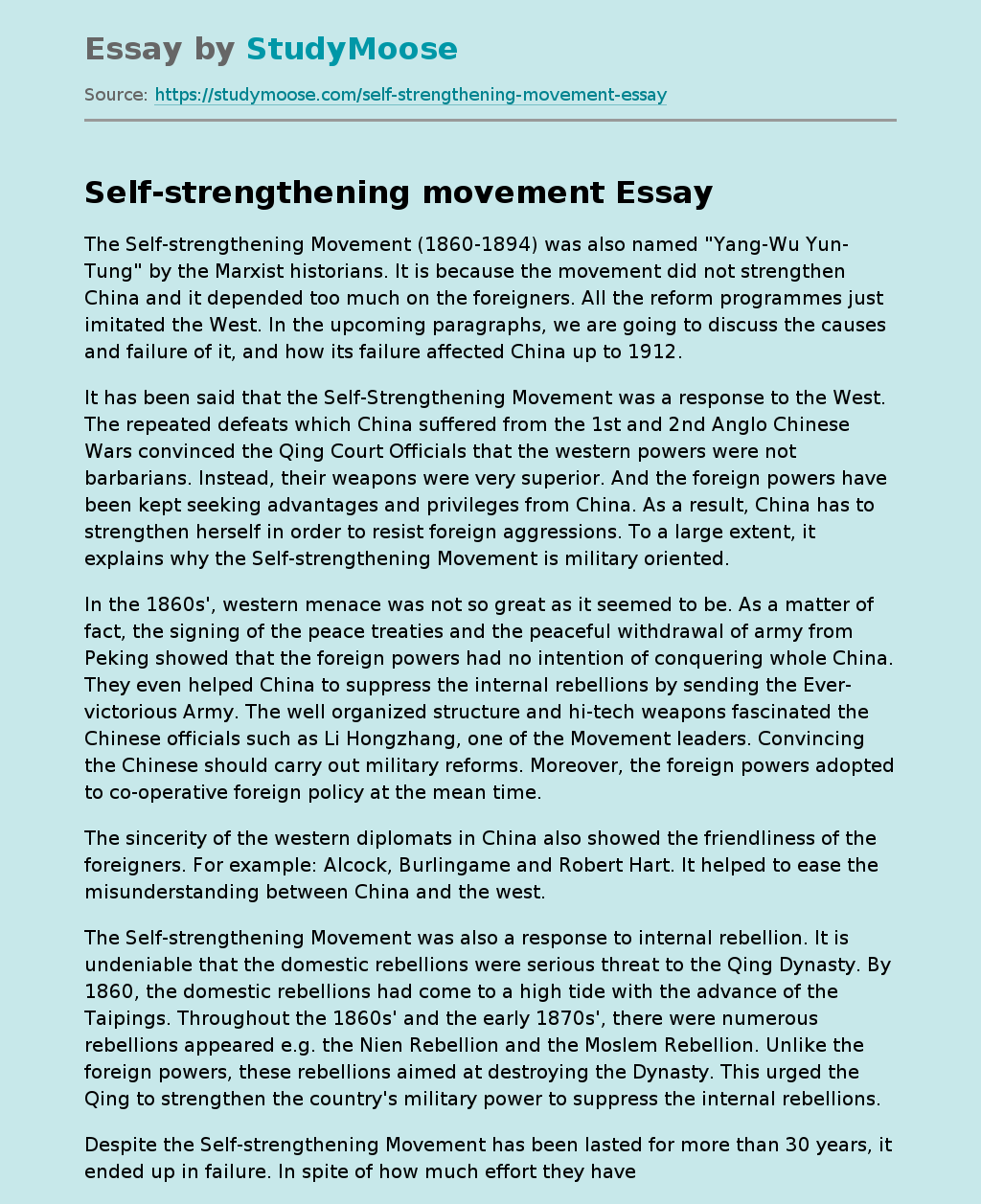