Many important factors helped to promote America’s huge industrial growth during the period from 1860 to 1900. Before the blossom of this industrialization, the United States consisted of mostly farms and small towns. The development of factories and urban cities soon changed all of this. The railroad system expanded and eventually turned into a goldmine for commerce in the United States. Machinery started to decrease the amount of animal labor used, which allowed the consistency and production of goods to rise. As it reached the brink of the 20th century, America had surprisingly become the world’s greatest industrial nation in history.

Don't use plagiarized sources. Get your custom essay on
“ Industrial Growth in the United States for 1860-1900 ”
Get custom paper
NEW! smart matching with writer

The Civil War, caused by Southern states seceding from the Union, sparked the beginning of the United States’ industrial growth. As the war came to and end, reconstruction within the country began to take place. Many new ideas and inventions began to pop up and American business leaders recognized them. One of these ideas was a railroad that would run from coast to coast.

In 1862, the building of this Transcontinental Railroad began. It was finished by 1869 and drastically increased cultural diffusion. The Republican party of the Federal Government was in control during most of the country’s industrial boom.

Their platform wanted to impose tariffs, or taxes, on foreign goods to keep America’s spending within its own borders. They also supported the construction of the Transcontinental Railroad. The railroad allowed goods to be sold throughout the whole country, which in turn increased production and sales. At that point in time, as well as today, time equaled money.

Travel times were cut, and therefore money was raked in more than ever before. By 1900, there was almost 200,000 miles of railroad track in America. This was an increase of over 160,000 miles from 1860. The United States was “on track” to becoming a huge industrial nation.

During the period of time between 1860 and 1900, there were many needs in industry. These needs included communication, natural resources, power sources, cheap labor, and applied technology. In the 1850s, 52% of all power came from animals while only 35% came from water and coal. By the 1900s, the use of water and coal more than doubled to 73% of all power sources. Many business tycoons realized his growing use of resources. One man by the name of John D. Rockerfeller created a monopoly over the entire oil industry through his plan of Horizontal Consolidation. With this plan he was able to bring together many firms in the oil business and combine them into a single unit called a trust. Another man, Andrew Carnegie, had similar views on gaining total control of a commodity. In 1882, he used the idea of Vertical Consolidation to gain control of the growing steel industry. His business, the Carnegie Steel Company, therefore controlled every factor in the production of steel. Rockefeller and Carnegie both became very rich men, and the United States Congress soon recognized this.

They responded by drafting the Sherman Antitrust Act, which outlawed the combination of businesses that would destroy competition. As more and more people moved to the West in search of better lives, the need for communication grew. Systems of sending messages through wires and electric currents soon began to appear. These inventions were called the telegraph and the telephone. People in the West could now communicate with the friends and loved ones in the East that they moved away from. In turn, their fear of isolation soon disappeared. Although the trouble of communication was diminished, life on the job continued to be a problem. Workers demanded better working conditions. Factories soon began to run faster and more smoothly than in the past.

Working conditions also improved and provided less risk of injury and strain on workers. (Document 1) Conditions were only getting better, but the need for lower wages was a growing problem for factories. Immigration rates to America began to increase. From the 1860s to the 1900s, the number of immigrants rose to over eight million people. This allowed wages for workers to go down because immigrants would work for less money. The factories could now spend more money on the production of goods. The many demands of industrial growth were met throughout America’s industrial boom.

During the second half of the 19th century, the United States shocked the world by transforming into a dynamite industrial nation. It’s population increased from six million people in 1860 to over thirty million in 1900. Power sources played a major role in industry at this time. Communication devices and railroads also increased commerce. Big businesses were on the rise and American’s soon left their farms for factories. These factors helped to promote the United States’ successfully rapid industrial growth during the period from 1860 to 1900. 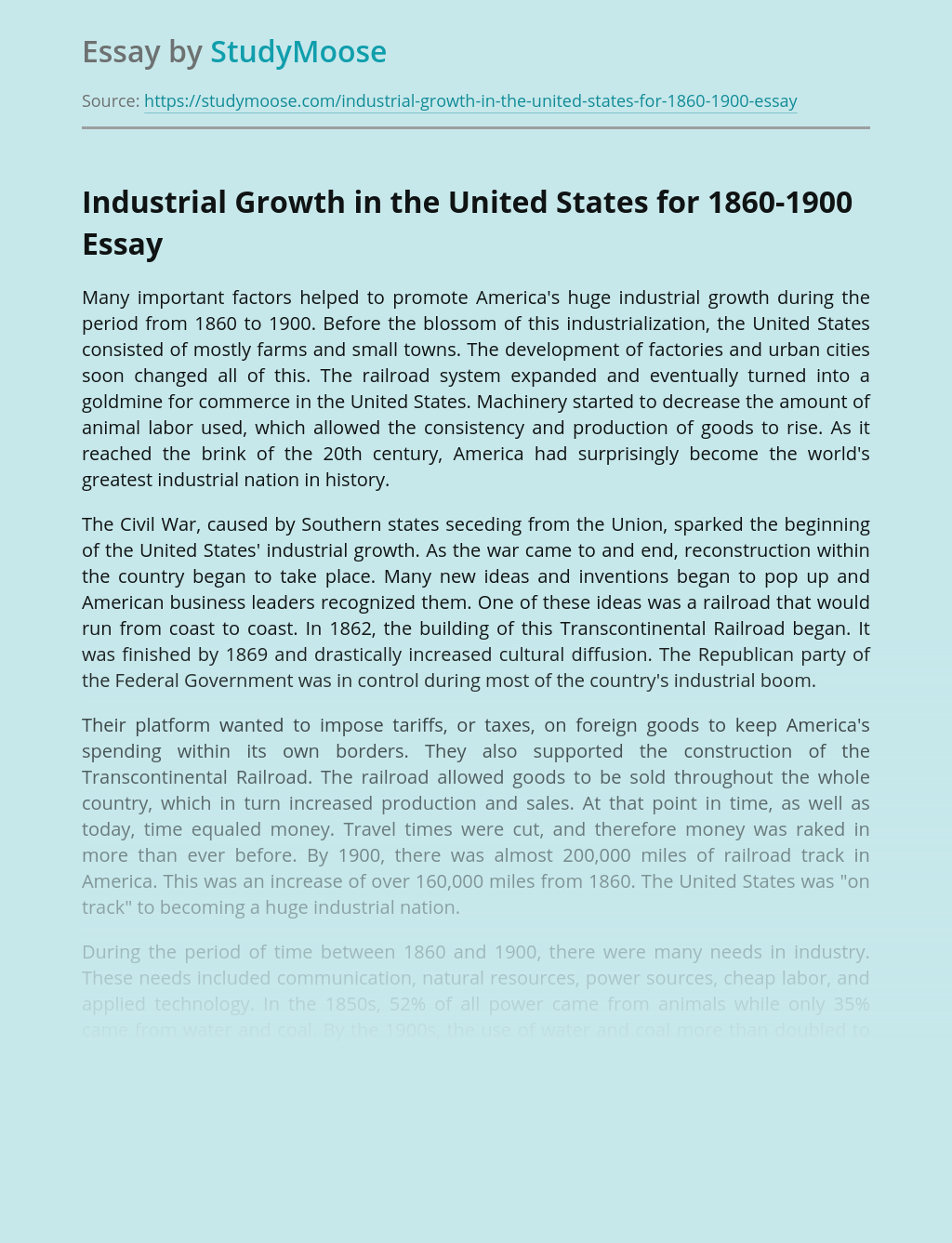