Self-Concept In The Social World

There is a saying popularized by John Done, which goes “No man is an island. ” This goes to show that an individual cannot exist without other people. Man is innately a social being. They need another person to make their life meaningful. Socialization is an important process that can shape the personality of an individual. It can help them establish contact with their environment. When we constantly socialize, the beliefs and opinion of the group or community where the individual socializes becomes a part of them and they eventually blend with the group.

Don't use plagiarized sources.
Get Your Custom Essay on Self-Concept In The Social World Just from $13,9/Page

The Development of the Self According to George Mead According to Professor George Mead, the self develops as a result of two concepts namely form and content. The latter, according to Mead, develops as a result of the inner experience of the individual. The transfer of the form from the environment to the inner experience is formed through vocal gestures(Mead). Vocal gestures serves as the manner in which the individual will stimulate himself in a similar manner they will stimulate other people.

Form is created from the method of stimulation to the response that they will receive.

The concept of ther self, in this case, is formed once the individual incorporates the vocal gesture used by the other person. An individual becomes aware of their self once the response of other people becomes incorporated into the way they will respond to a similar reaction. The individual will realize that the responses and stimulus are innate in their personality(Mead). According to Mead, the “me” and “I’ are different concepts. The former is empirical and results from socialization. The “I,” on the other hand, is not immediately evident in consciousness of the self.

The “I” concept initiates the formation of the “me. ” Mead explains that both cannot appear at the same time. Consciousness csan only set in when an action has been initiated by the individual(Mead). Furthermore, self-awareness is not possible unless both the individual and their community contribute in the formation of the self-concept. Imitation by itself cannot bring about self-concept, it can only strengthen(Mead). Moreover, Professor Mead introduced the concept of generalized others into the picture as well. This is another term that can bring about awareness of the self.

When an individual encounters a certain experience, they would adopt the response of others and then start to integrate them as though they were our own(Mead). Application Of The Self-Concept To My Personal Life As a social being, I would say my self-concept arise as a result of my interaction with other people. While I may have an idea of my attitudes and beliefs, the manner that my community and environment perceive me has a major impact in my overall picture of myself. Therefore, other people’s view of me can play an important role in terms of how I will see myself.

This is the reason why I value companionship as well as other people. They constantly remind me of who I am and what I can do. Whenever I am deviating from my usual behavior, other people are there to remind me that how I am responding to a situation I am facing right now is not the way I would normally react. The motivation of other people is likewise a major reason why I have a high self-esteem. Since they keep on reminding me on what I can accomplish if I believe in myself and use my potential. Over the years, I have never looked at myself as worthless.

Because of my high confidence, I have accomplished a lot of things on my own with minimal superivision from other people or from loved-ones. Since I have a high self-esteem, it never crossed my mind that I would need the help of other people in solving petty or simple problems. I have developed a strong belief in what I can do and what I can accomplish. Overall, I see myself as a strong person. There would be times when I feel down or vanquished but just like a bamboo tree, I would remain firm amidst the strong typhoons that would come into my life.

There was a time in my life when some people doubted my capacity for success. I was very upset because despite all the efforts I showed, they still did not believe that I can accomplish some thing. I knew that I had to do something in order that the view of the person doubting my ability would change. I did not confront the person personally instead I let my actions speak for itself. In the end, I was successful in changing the point of view of the other person. Now, he no longer sees me as a person uncapable of succeeding. In another instance, I realized how important other people are to my personal development.

One time, I had a very serious problem which my own power cannot handle. At that time, I was so down and felt that it was the end of the world for me. I did not want to bother my friends because I felt that they have problems of their own and I did not want to be a burden to them. One of my closest friends noticed the sudden change in me. She tried to ask me what seems to be the problem. I did not want other people to see my vulnerability so I just told her that there was nothing wrong. Because of her continued insistence and prodding, I was forced to open up my problem to her.

During the course of our conversation, I slowly felt relieved and thankful that she was around to help out. At that point, I realized the importance of other people in my road to being a better person. At the initial onset of my problem, I was so down and felt alone. But thanks to my friends and other people around me, I felt relieved and important. From that experienced, I learned that we cannot live on our own. Inner environment is not sufficient. We still have to include our external environment because they have a role to play in shaping up our personality development.

Likewise, it is not necessary to have a lot of them. Keeping one or a couple of trusted friends is enough. Conclusion Man is innately a social being. The formation of their self-concept is dependent on both the inner and external environment. An individual will only develop a self-concept when they have incorporated the attitudes of other people into their own set of attitudes. The environment surrounding an individual plays a major role in their personality development. This is the meat of Professor George Mead’s theory.

Self-Concept In The Social World. (2016, Nov 06). Retrieved from https://studymoose.com/self-concept-in-the-social-world-essay 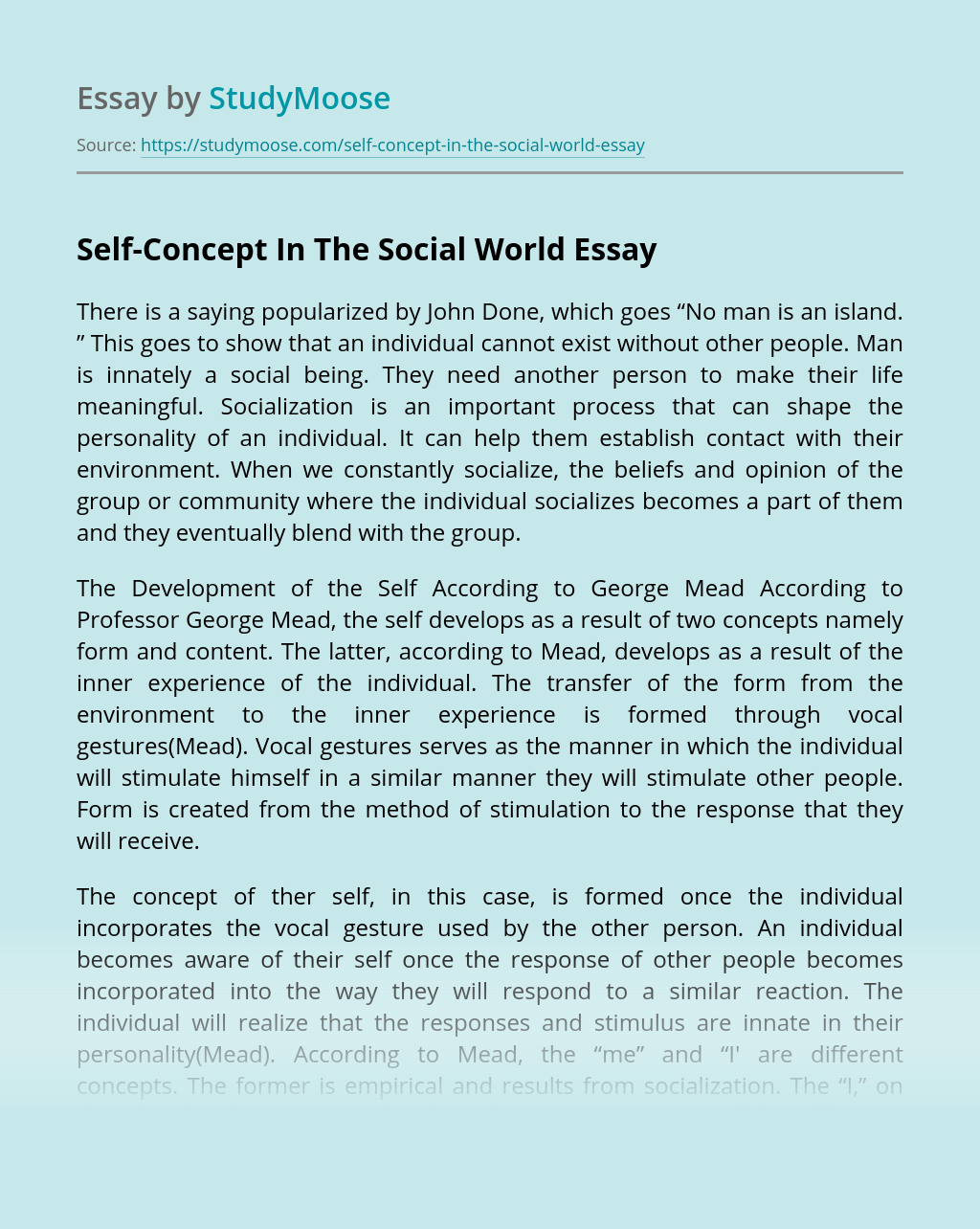 John Hospers utilizes the rule of typical use, and Freud’s Psychoanalytic theory of human habits, to argue guy is incapable of being free. As a tough determinist, Hospers thinks a really free act can’t be caused, and man’s actions are all predetermined, due to the fact that they’re triggered by an external element. He begins...

“To sin by silence when they should protest makes cowards of men” “Never be afraid to raise your voice for honesty and truth and compassion against injustice and lying and greed. If people all over the world…would do this, it would change the earth” said William Faulkner. Being suppressed by an entity powerful then us...

Extra Credit The fictional character I chose to diagnose is Donkey from Shrek. Donkey is a hyperactive, talkative, funny and sensitive donkey with buckteeth. He enjoys singing, senseless chatter and usually speaks Ebonics. He also proves to be rather annoying to those around him. Donkey has a sweet tooth as well. He enjoys parfait, cake...

I remember playing the game Trivial Pursuit and in order to win this game it came down to me acquiring to answer one question. I racked my brain truly hard trying to remember this particular answer. The question inquired about a particular mountain I by no means heard of or could remember learning about. This...

Comparing and Applying Theories of Development

Let’s take a look at all three and compare some of their similarities, as well as a few differences and then we can look at how these and other theories are used to analyze and evaluate the development of a child. Sigmund Freud was a pioneer of his field. His Psychoanalytic theory was the first...