Leveraged recapitalization is a financial strategy in which a company will take on large amounts of debt to either issue a large dividend or repurchase shares.

Don't use plagiarized sources. Get your custom essay on
“ Sealed Air Corp ”
Get custom paper
NEW! smart matching with writer

The goal is to give as much back to a company’s shareholders as possible. This in part lowers the company’s overall Weighted Average Cost of Capital (WACC) since the cost of issuing debt is less expensive than issuing stock as debt holders are first in line during a liquidation of a company’s assets during bankruptcy. In other words, equity owners have more at stake than debt holder so more risk equals higher rates.

Also, issuing debt provides a tax shelter as interest is tax deductible. This drastic approach to restructuring a company’s capital structure is still viewed as controversial as financial experts continue to weigh the pros and cons of going through a leveraged recapitalization.# Gator Consulting’s view is leveraged recapitalizations work only in very specific circumstances such as the Sealed Air Case.

Sealed Air drew large, steady cash flows over the previous several decades under the protection of its patent portfolio of innovative packaging material.

While the company continued to create large cash flow, the corporation was facing an aging patent portfolio that was quickly reaching expiration. Without product innovation, the company faced price cutting competitors, and would need to cut manufacturing costs to remain competitive.

In an effort to keep the company’s operations running efficiently, Sealed Air executed the World Class Manufacturing system. One of the main focuses in WCM is to keep inventory low. By keeping inventory low less money is tied up in working capital and cash flow is improved. To run a WCM program well, machinery must be kept simple and consistent so that maintenance and change over during manufacturing goes quickly and smoothly. WCM makes a business more flexible to changes in the manufacturing schedule.

While this system helped in making the corporation leaner, the large cash flows were continuing to give a false sense of security to management. Having too much cash on the balance sheet created several other challenges below, that a leveraged recapitalization would address.

Rationale for the leveraged recapitalization The case of Sealed Air is relevant for other companies with similar capital structures and cash flows as those companies may have in common the challenges Sealed Air faced below.

First, the company looked at potential acquisitions as it was customary for the company in the past to use excess cash for M&A activity. At the time of the leveraged recapitalization, no other promising acquisitions existed. Furthermore, previous acquisitions failed to inspire or reinvigorate the product line or workforce. With the newly leveraged structure, the company would have to undergo much greater scrutiny prior to any new acquisitions versus before when the goal may have been to simply grow.

Second, the excess cash allowed management to remain complacent regarding innovative production techniques, as it gave the false sense of security and growth for the company. While the World Class Manufacturing initiative provided some manufacturers to become more efficient, the management ultimately feared having too much cash on the balance sheet would not continue to force manufacturers to constantly conceive of new and innovative ways to keep lean. Having a leaner balance sheet keeps the company leaner from a psychological and an employee morale standpoint. At an extreme level excess cash can lead to agency costs as in a bloated cash flow can result in gratuitous expenses such as corporate jets, unnecessary conference travel, and other unproductive wasteful spending.

Third, holding onto the excess cash wasn’t in the best interest of the shareholders. After all, if the cash isn’t being used to invest in profitable projects within the company, it should be returned to the shareholders to allow them to invest in other opportunities. Simply put, the company felt it didn’t need the extra cash to invest in positively yielding projects or fiscally beneficial acquisitions and wanted to return in all one large amount.

Fourth, the company wanted to protect itself from being acquired by another company. In the era of the Corporate Raider of the 1980s, many companies were concerned with hostile takeovers. In many ways, the leveraged recapitalization made the company a less attractive target as any prospective buyers would have to now take on Sealed Air’s debt.

Revaluation post recapitalization There were concerns in the analyst community that the amount of debt that Sealed Air took on was too large. Immediately following the recapitalization and the payment of the $40 special dividend, the market value of equity was $12.5*8.245M shares = $103.0625 million. The value of debt was approximately $170M+$136.7M=$306.7 million which means that about 74.85% of the capital structure is made up of debt#.

As discussed above, acquiring debt decreases the WACC which inturn increases the company’s overall value. WACC is also used to evaluate the health of a company. However, if a company takes on too much debt, the benefits of the increases in debt begin to be offset by the increased likelihood of bankruptcy brought about because of too much debt.

There were analysts that felt that Sealed Air’s recapitalization was going to be value destroying because of the debt load. While their concerns are well grounded, the market has shown that the debt taken on by Sealed Air was actually value creating as evidenced by the increase in total value of the company and the increase in shareholder value ( See Appendix 1). What is not clear is whether the debt taken on by Sealed Air is exactly the debt needed to maximize value. Should they have paid a $35 special dividend? What about a $42 special dividend? We will have to trust in the management team’s analysis and expertise in their business in determining whether $40 was the magic number for the special dividend.

Value Created by Recapitalization When reviewing the Sealed Air recapitalization we looked at “Value created” as the metric to determine if the recap was a good idea or not. We found that the recapitalization created value in a number of different ways as outlined below. Also advise, this is same calculation can be applied to any company considering a leveraged recapitalization. 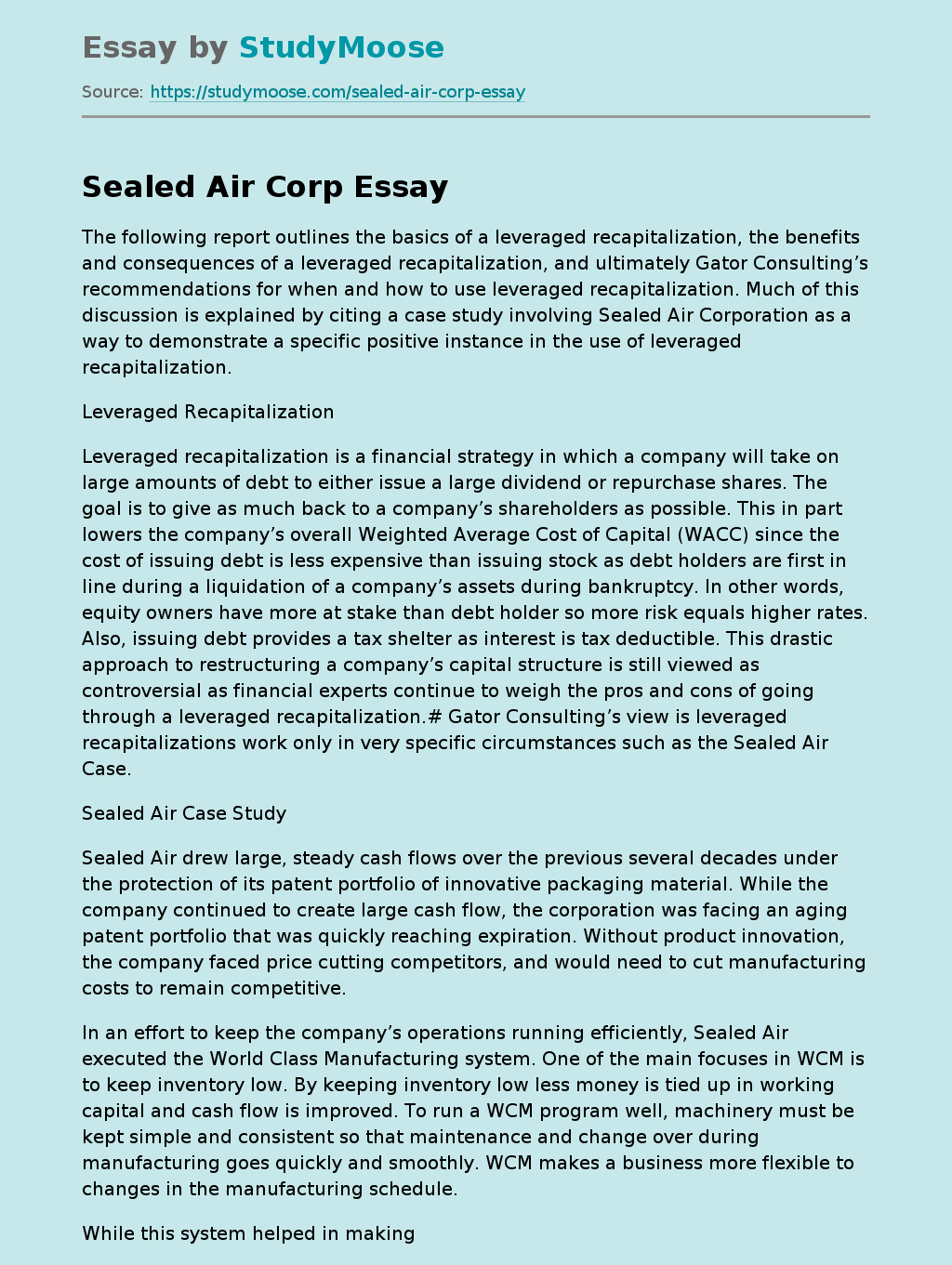