In the article, “Researching Dealers and Smugglers,” Patricia Adler discusses her and her husband’s experience using participant observation to collect data from drug dealers and the problems this qualitative method brought. A qualitative method focuses on collecting rich, non-statistical data. This method involves face-to-face interviews and actual participation with the group being researched. The Adlers use this method because it is almost impossible to gather accurate information on people who smuggle drugs.

This is true because they are such private and deceitful people.

Don't use plagiarized sources. Get your custom essay on
“ Scientific Method and Participant Observation ”
Get custom paper
NEW! smart matching with writer

The only way to get the real facts is if the smugglers trust the person. Unfortunately, participant observation brought problems such as the dealers and smugglers being under the influence or going through withdrawal during the interviews and the Adlers mixing their overt and covert roles. The Adlers chose participant observation because they found that using this method allowed them to acquire the most in-depth and rich data than any other method.

If criminals like dealers and smugglers were given a survey, it would not work out because they are not just going to tell the truth and risk getting caught by the police.

They are specific with who they give information to, so the Adlers had to show them that they could be trusted. They could not have done that with without using participant observation. Although there were many aspects about the Adlers that made them and the research method they used convenient, there were also some risks they had to take.

While doing research, the Adlers encountered some problems using this method, one of which was interviewing the dealers and smugglers while they were under the influence of either marijuana or cocaine.

In addition, the participants were sometimes withdrawal symptoms, so they were not able to interview properly. Patricia mentions how marijuana and cocaine had different effects on the interviewees. She states, “marijuana was unproductive for a number of reasons… Often people became confused, sleepy, or involved in eating to varying degrees. ’

On the other hand, cocaine assisted the research procedure by making the dealers feel more comfortable. Cocaine also helped the dealers open up easily. During the interviews, some dealers experienced withdrawal symptoms. It caused them to become malicious with each other or towards the Alders without any warning. The way the Alders solved this problem was by taking precautions when interacting with the dealers.

The cocaine use was not a problem for the Adlers, but they most likely dealt with the marijuana issue quite easily since Patricia does not specifically explain how it was solved. In addition, there was another problem the Adlers encountered. The Adlers also found that mixing the overt and covert roles with the members of the group throughout the investigation was another issue. Since the Adlers had different level relationships with every individual, some of the dealers were aware that they were a part of a research project while others were not aware.

This sometimes confused the Adlers. Patricia states, “They [the informants] would made occasional veiled references in front of people, especially when loosened by intoxicants, that made us extremely uncomfortable. ” This issue made the couple uncomfortable because they did not want to blow their cover. Patricia and Peter Adler also feared that the participants would think they are police. Peter and Patricia Adler solved this issue by take the necessary safety measures so anyone they did not want to find out.

The Adlers encountered various problems while utilizing this qualitative method. They had troubles such as mixing their covert and overt roles and dealing with some of the smugglers and dealers being intoxicated. Therefore this investigation became very risky, but Patricia and her husband finalized by collecting all the data needed. The Adlers also resolved their problems in a cautious way utilizing patience, precaution, and rational and clever thinking. The couple definitely learned a lot throughout the experiment and got more than they anticipated going through it. 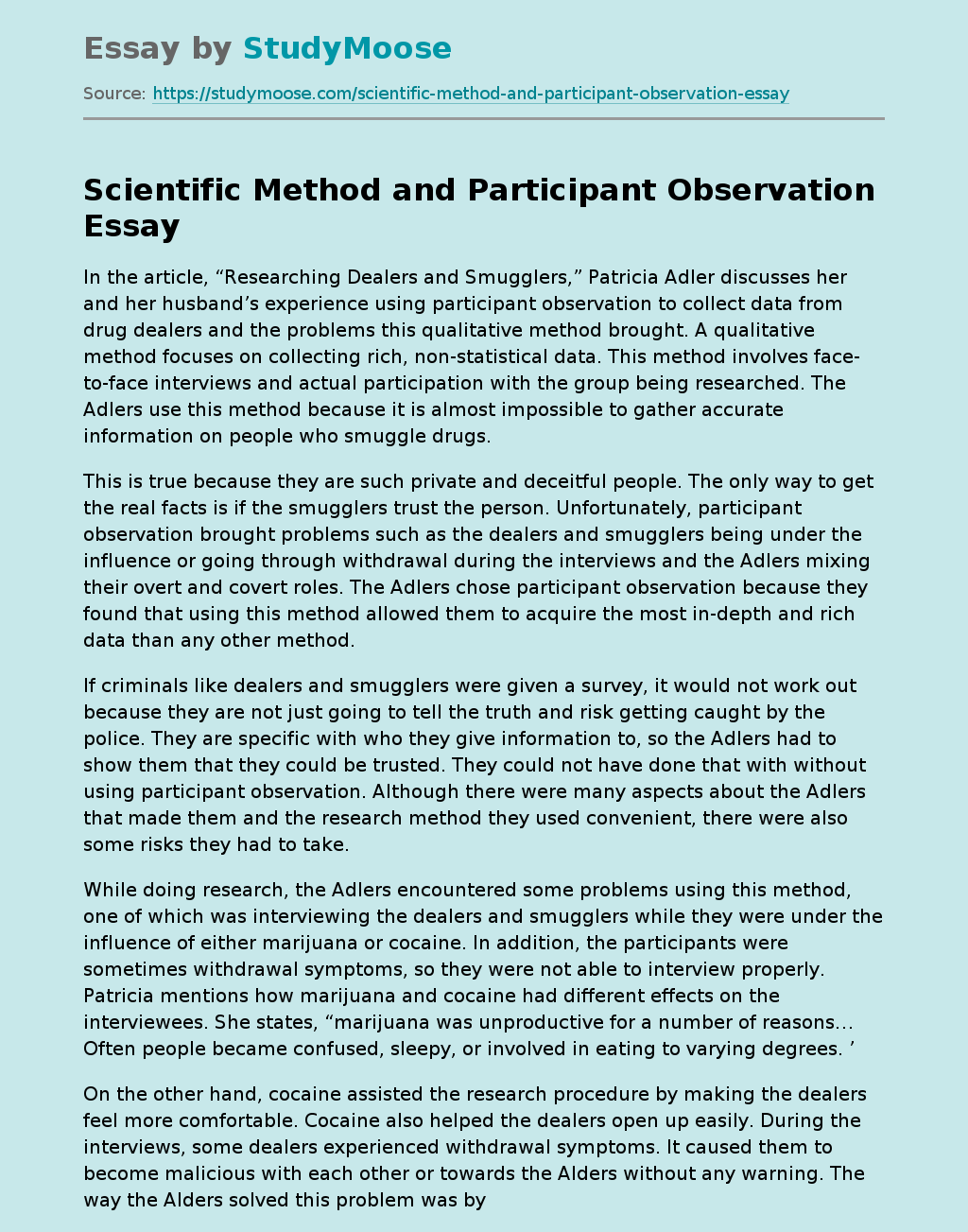