Throughout history, many people have often become wary of the steps science has taken, perhaps believing that man has taken on the power of God to control life and death, even to control nature itself. More recently, cloning and genetic selection have been seen as man trying to “play God” by creating or altering life. The short story “The Birthmark” by Nathaniel Hawthorne is the tale of a man obsessed with science and power. His idea of perfection through science becomes a war against the power of nature.

Turn in your highest-quality paper
Get a qualified writer to help you with
“ Science vs. Nature ”
Get high-quality paper
NEW! AI matching with writer

Aylmer, “a man of science”, has fallen in love with and married the beautiful Georgiana. She is a woman that Aylmer considers perfect…except for a small red birthmark on her cheek. This “imperfection” to an otherwise perfect woman soon turns into Aylmer’s obsession. He no longer sees her beauty when he looks at her, but only sees her flaws. In this story, Hawthorne demonstrates that taunting the power of Nature may have disastrous results.

Aylmer sees Georgiana’s birthmark as an imperfection, something often found in nature. As stated in the story, “It was the fatal flaw of humanity which Nature, in one shape or another, stamps ineffaceably on all her productions, either to imply that they are temporary and finite; or that their perfection must be wrought by toil and pain”(Hawthorne 2). But perhaps this is not a blight, but a sign of uniqueness, that every creation under Nature is special. Many of Georgiana’s former suitors did not see it as an affliction, saying, “…some fairy…left this impress there in token of the magic endowments that were to give her such sway over all hearts.

Many a desperate swain would have risked life for the privilege of pressing his lips to the mysterious hand [her birthmark]” (Hawthorne 1). Georgiana, herself, did not see it as an imperfection until Aylmer said it was so. As Georgiana stated in the story, “To tell you the truth it has been so often called a charm that I was simple enough to imagine it might be so” (Hawthorne 1). It is only through Aylmer’s eyes, through science, that her unique mark is seen as unworthy.

Consistently throughout the story, science seems to be at odds with nature. Aylmer’s assistant, Aminadab, who is portrayed as “earthiness”, perhaps a man more of nature than science, does not see Georgiana’s mark as a blight to her beauty that must be removed. He sees no fault with it, saying, “If she were my wife, I’d never part with that birthmark”(Hawthorne 4). As a man of nature, he sees her flaw as part of her beauty. In the end of the story when Georgiana dies, laughter is heard, presumably from Aminadab, leading to the premise that nature, represented by Aminadab, is laughing at science’s failure.

Aylmer taunts nature with his increasing arrogance. He thinks that he would be God-like with power over life. He says, “No King on his guarded throne could keep his life if I, in my private station, should deem that the welfare of millions justified me in depriving him of it” (Hawthorne 5). He becomes even more obsessed over her birthmark, saying, “It will be such a rapture to remove it” (Hawthorne 4). His obsession with the birthmark begins to control his thoughts night and day so that he can think of nothing else. Georgiana becomes Aylmer’s science project and he strives to perfect her because he thinks he can prove his own worth by how she turns out. It is his quest as a man of science to achieve perfection. But nature is not meant to be perfect. Because of Aylmer’s obsession with science and perfection, it soon affects how Georgiana sees herself. He keeps bringing it up with shock and disgust, so that now she sees what is a part of her, part of her unique beauty, as something horrible.

It is Aylmer’s persistance that makes Georgiana feel unworthy. Because she now sees herself as imperfect, she no longer wants to live if the birthmark can’t be removed. When she is told that his elixir to remove her birthmark may be a threat to her life, she states, “Remove it, remove it, whatever be the cost, or we shall both go mad!” (Hawthorne 8). As Georgiana waits for Aylmer to find a cure, she reads his journals of past experiments, and finds that many of his experiments have failed. Aylmer also shows her some of his experiments to cheer her up, but they fail as well. One of his experiments, a beautiful flower, quickly withers and dies with Georgiana’s touch, perhaps foreshadowing her own death.

Yet with all these failed experiments, ironically, Georgiana is all the more determined to have Aylmer rid her of this imperfection. Aylmer had earlier developed a lotion that would fade her marks safely, but that would not enough for him now. He wants more. He wants perfection. However, perfection cannot exist in nature, so when Aylmer achieves perfection in Georgiana and the mark is gone, she dies because someone can’t be that perfect and still exist in this world.

Even though he had lofty ideas of perfection in science and the spiritual world, Aylmer should have accepted and loved life’s imperfections in the natural world and appreciated these imperfections. He would have then been happy, having the best of both worlds. 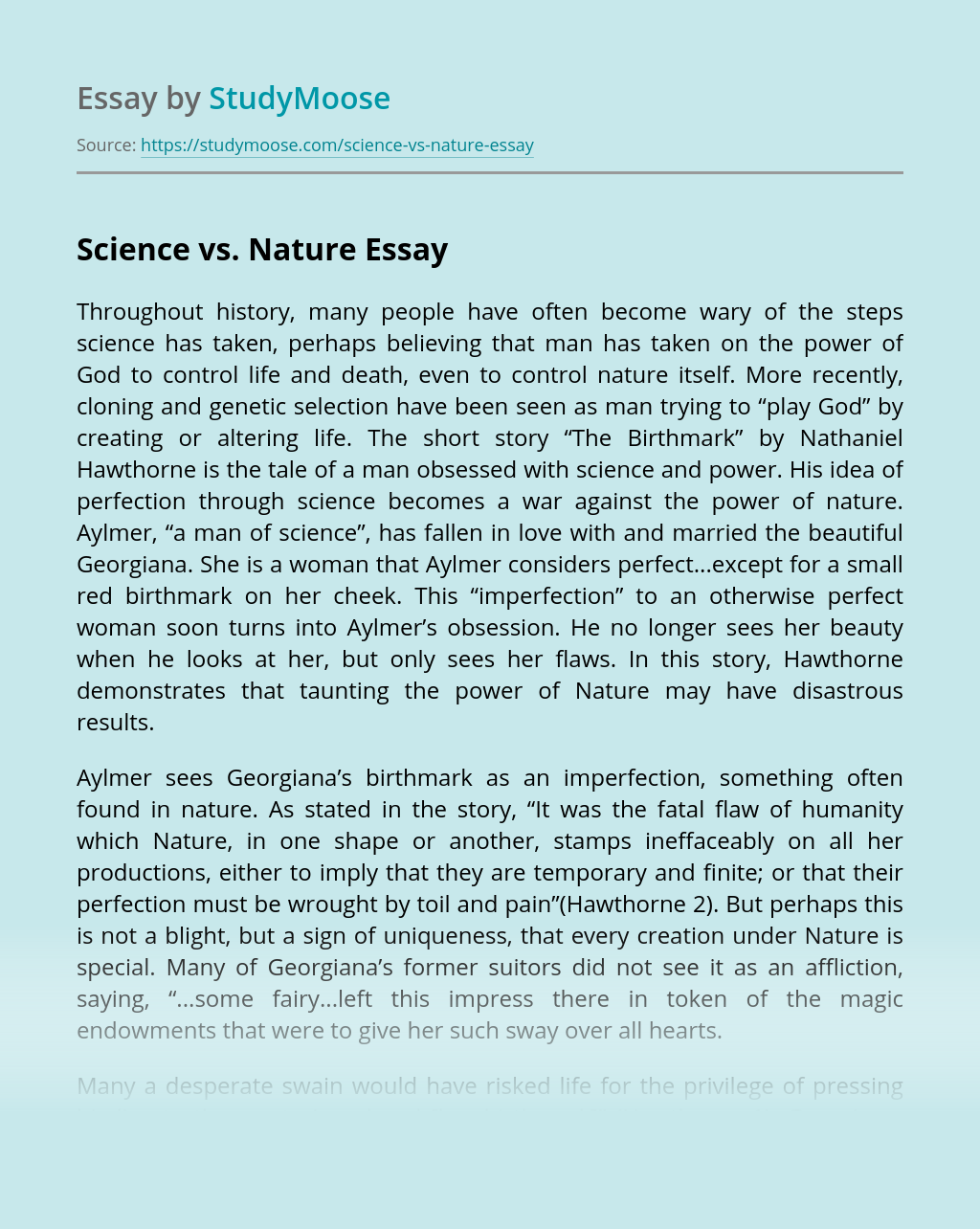 Turn in your highest-quality paper
Get a qualified writer to help you with
“ Science vs. Nature ”
Get high-quality paper
Helping students since 2015
Stay Safe, Stay Original