Sandy Hook Cause and Effect

Don't use plagiarized sources. Get your custom essay on
“ Sandy Hook Cause and Effect ”
Get custom paper
NEW! smart matching with writer

A phenomena such as the Sandy Hook shootings doesn’t occur without an individual being deeply hurt. Often small towns, unlike big cities, show social classifications which divide and label segments of society, particularly in high school. The football players are popular and celebrated while the nerds and band students are not. Adam Lanza was a scrawny 14-year old boy that didn’t have any hope for acceptance.

This is where the problem begins (Newman 6).

Trying to fit in in any way he could, Adam Lanza went from telling jokes to stealing CD’s. He wanted any kind of acceptance that he could from the peers around him, but his awkwardness drove people away. Finally, the Goths, a group of high school individuals that partake in the study of Gothic Literature, took interest in him when he stole his father’s gun, but they lost interest when Adam wouldn’t bring them more guns. The Goths turned their backs on Adam with everything he tried, until he started talking about shooting people.

Adam finally found out what it was like to be acknowledged, and he liked it. He continued to interest the Goth group with talking about the urge to kill, and to keep this popularity he just needed to follow through (Newman 6).

Twenty children and six adult staff members were killed in the horrible mass murder at Sandy Hook Elementary. Sadly, precautions such as lockdown drills, school cameras, and secure entries aren’t considered until after deadly events such as Sandy Hook take place. The effect of the shooting at Sandy Hook moved the peers of the school to a new location and a grant was given to the victims of the school to build a new safe location for the students of the school to go to. Sandy Hook and other schools around the country are using this as a wakeup call to improve the security at their schools and do whatever they can to provide a safe environment for the students. (Shermer 33).

One man caused the violence at Sandy Hook Elementary School and in result the nation is shocked and scrambling to recover from the event. Sandy Hook has upgraded their security as well as thousands of other schools. Adam Lanza was a distraught man and years of ostracism and alienation has brought him to this sad end. This can be avoided by promoting inclusion in school societies. Schools need to prepare for disastrous events such as a school shooting before they take place, instead of waiting for events such as this to change the way they look at security. Safety drills, armed guards, and surveillance systems all provide protection against these elements and overall prevent death and destruction in our school systems.

Sandy Hook Cause and Effect. (2016, Feb 24). Retrieved from https://studymoose.com/sandy-hook-cause-and-effect-essay 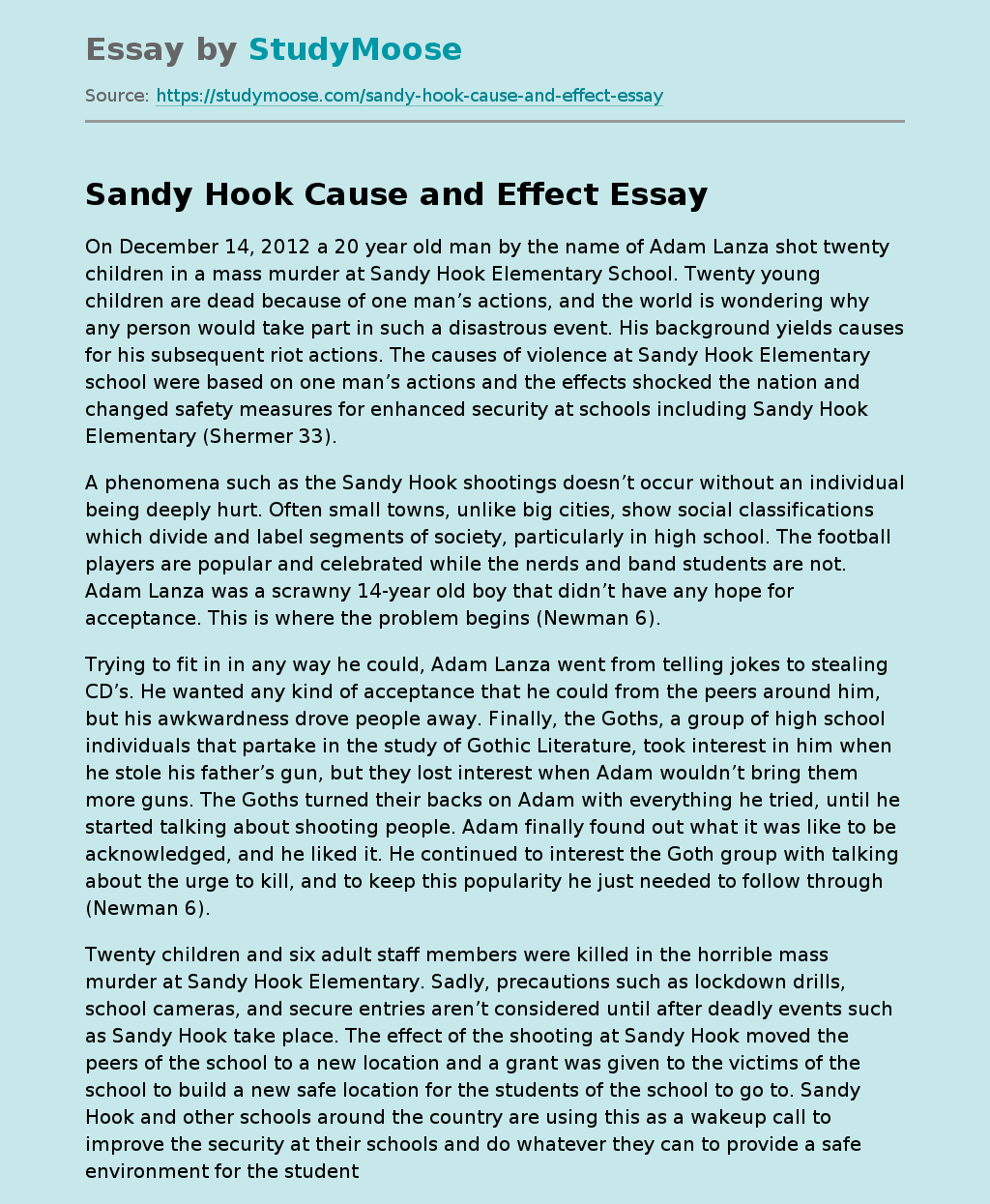