In “Keeping Close to Home: Class and education”, a chapter excerpted from Talking back (1989) by Bell Hook’s, suggests that moving on with life by attending college influences individuals to hide or change the values they were raised with. She argues that people should never forget there family background or their past just because they change environments. From her perceptions of some of the students at Stanford, she also states that even the “lower class” people have beliefs and values too and that it has nothing to do with what social class a person is classified as.

Don't use plagiarized sources. Get your custom essay on
“ Bell Hook’s “Keeping Close to Home: Class and Education” ”
Get custom paper
NEW! smart matching with writer

Hooks aims her beliefs towards the lower working class people. Because hooks feels strongly about her belief, she argues that a university should help students maintain the connection with their values, so that people of different communities will feel neither inferior nor superior to others but equal.

Hooks demonstrates her knowledge of values by relating her experience at Stanford where she met many privileged whites who had values that contradicted her own.

For example, many of the white students appeared to lack respect for their parents. However, hook’s parents always taught her to show them respect. Hooks even says in her essay, “I was profoundly shocked and disturbed when peers would talk about their parents without respect, or would even say that they hated their parents” (Hooks, page 51). Also, everyone looked down upon the working-class when that was the class from which she came. Hooks states, “I talked to no one about the sources of my shame, how it hurt me to witness the contempt shown the brown-skinned, Filipina maids who cleaned our rooms” (Hooks, page 50).

Hooks felt hurt because her dad was a janitor. That was why it was so hard for her to look down on the working-class. Because Stanford even accepted her into their institution, hooks felt as though she needed to act privileged. When she refused, the university and its students considered her rebellious; however, if she had not refused, she would have been ignoring and forgetting the values that she had learned from her parents.

The way Hooks pulls in her readers is by inspiring the audience and appealing to its emotions and values, hooks relates an example of the hard times in her relationship with her parents before she went to Stanford. In the example, she describes how her parents were reluctant to allow her to go because they felt that a closer college also had a good education to offer. Hooks also expresses how she became upset with her parents and how her mama felt as though bell hooks lacked appreciation for her. Hook’s mama says to her, “Your childhood could not have been that bad. You were fed and clothed. You did not have to do without – that’s more than a lot of folks have and I just can’t stand the way y’all go on” (Hooks, page 48). Later, when bell hooks attends Stanford and notices how students constantly feel anger and resentment towards their parents, she remembers that her parents raised her to show them respect. “While I often needed more money, I never needed a new set of beliefs and values” (Hooks, page 51). Then, she realizes how important it was to maintain the connection with her values instead of replacing them with others’ values.

Hooks definitely expresses her professional views throughout the essay. Her views are obviously professional because she is a college graduate and has a good education background. However, when she relies heavily on her views based on her experience at Stanford, she presents her views as being convincing by showing her understanding of pressure and values from that experience. Her experience establishes common ground with the audience and proves that she is familiar about the pressures at a university. Hooks develops common ground with those in the audience who might be or have been in a university. Because people generally trust those who appear to know their topic very well, she effectively appeals to her audience.

Bell Hook’s proves to her readers the true importance of family values and their background throughout her writing. “Communication between black folks from various experiences of material privilege was much easier when we were all in segregated communities sharing common experiences in relation to social institutions. Without this grounding, we must work to maintain ties, connection” (hooks, page 58). As hooks hints, maintaining ties may not be easy, but it is definitely possible. Hooks establishes common ground with people who have these questions, and she gives the answer in her experience of hard work. Having worked hard on handling harsh criticism and pressure without losing ties with her background, bell hooks remained strong and represented her family values that she was raised with, through her actions. 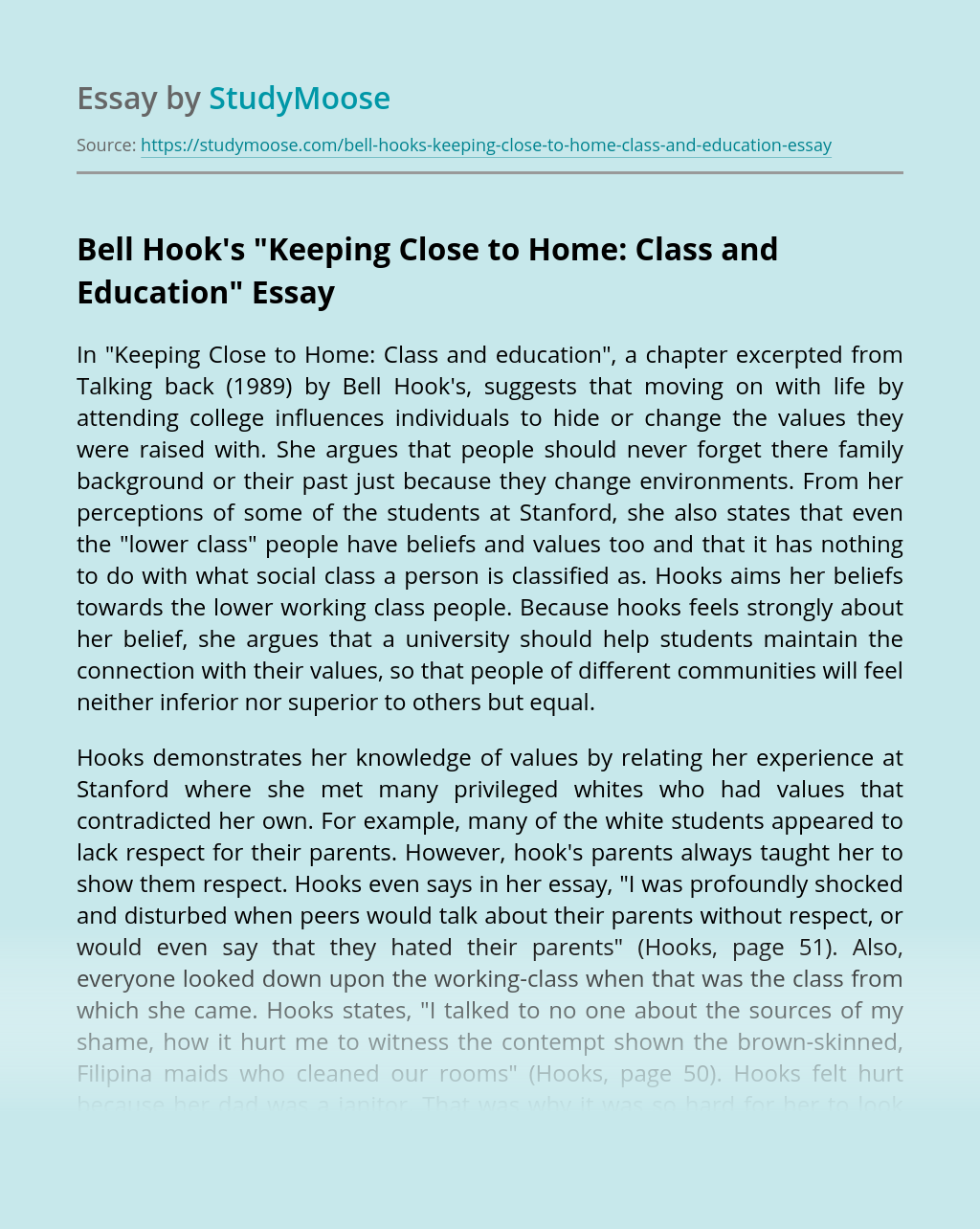