In looking at Derrick Bell’s “The Space Traders” as an allegory, the characters personify the abstract subjects of late twentieth-century racial politics. In the text the politics of the United States revolves around anti-black thinking, and many white subjects believe that all the environmental and economical problems in the U.S. is due to the black race. Secondly, “the space trade” comprehends Bell’s concept of “the permanence of racism” in the Unites States. Bell believes that “the space trade” is somewhat familiar to the first African slave trade, and that these two events occur because of “the permanence of racism” in our society and the structures that allow this repetition to exist.

In this essay I will discuss the political positions of the subjects in “The Space Traders” and the extent in which they personify late twentieth-century racial politics, and then analyze “the space trade” and comprehend it with Bell’s belief in “the permanence of racism” in the United States.

In “The Space Traders”, Gleason Golightly, a black economics professor who is an unofficial cabinet member of the president, believes that black people need to stand on their own feet. Although he always has good intentions for the black race, he is considered an Uncle Tom by the black community because of his political positions. In “The Space Traders”, Golightly says, “As you know, Mr. President, I have supported this administration’s policies that have led to the repeal of some civil rights laws, to invalidation of most affirmative action programs, and to severe reduction in appropriations for public assistance.

To put it mildly, the positions of mine that have received a great deal of media attention, have not been well received in African-American communities. Even so, I have been willing to be a ‘good soldier’ for the Party even though I am condemned as an Uncle Tom by my people.

I sincerely believe that black people needed to stand up on their own feet, free of special protection by civil rights laws, the suffocating burden of welfare checks, and the stigmatizing influence of affirmative action programs. In helping you undermine these policies, I realized that your reasons for doing so differed from mine. And yet I went along.” Bell personifies Golightly as a black neo-conservative in late twentieth-century racial politics, and because of his conservative beliefs and his continuous support of anti-black views, he is not respected by black subjects. The aliens in “The Space Traders” also play a critical role in demonstrating the racial politics that exist in the late twentieth-century. Their actions are similar to that of capitalists because they are only interested in their own needs and wants. Their supremacy in attaining their wants, the African-Americans, is demonstrated when their head alien spoke and looked similar to former President Reagan. Bell states, “Then came the second surprise. The leaders of this vast armada could speak English. Moreover, they spoke in the familiar comforting tones of former President Reagan, having dubbed his recorded voice into a computerized language-translation system.”

The aliens did their marketing research on what appeals to Americans, and they realized that Reagan’s image, monotone voice, and simple speech is persuasive to white Americans and it reflects what Americans want to see and hear. This persuasiveness inevitably enabled the aliens to take all black subjects back to their land. The white cabinet members also play significant roles in “The Space Traders”. The cabinet members are anti-black activists who disregard the Bill of Rights, and believe that “the space trade” would guarantee that America would conquer its present problems and be lead to prosperity for at least the next century. In “The Space Traders”, Helen Hipmeyer, Secretary of Health and Human Services, says, “A large percentage of blacks rely on welfare and other social services. Their departure would ease substantially the burden on our state and national budgets. Why, the cost of caring for black AIDS victims alone has been extraordinary…” Hipmeyer strongly believes that black Americans are the reason for all the social and economical problems in the U.S., and that with their departure the nation’s problems could substantially diminish.

The Attorney General also believes the aliens offer should be accepted. When speaking to the cabinet members he states, “Mr. President, I think we could put together a legislative package modeled on the Selective Service Act of 1918. Courts have uniformly upheld this statue and its predecessors as being well within congressional power to exact enforced military duty at home or abroad by United States citizens. While I don’t see any constitutional problems, there would like be quite a debate in Congress. But if the mail they are receiving is anything like ours, then the pressure for passage will be irresistible.”

How can the Attorney General not see a constitutional problem with “the space trade”? In my opinion, the fact that the Attorney General, and the other white cabinet members, disregard the constitution and are willing to release the blacks without knowing what will come of them, solidifies their lack of ethics and the extent in which politics in the U.S. revolves around anti-black thinking. In “The Space Traders” the political positions of the characters enables one to determine the extent in which racial politics exists in this country, and the text also analyzes “the space trade” and comprehends it with Bell’s concept of “the permanence of racism” in the U.S.

In “The Space Traders”, Bell is able to analyze “the permanence of racism” by calling attention to the similarities between the past and present history of the United States. He believes that “the space trade” is very similar to the first African slave trade, and that racism has existed in this country since the founding of the nation to the late twentieth-century. When the White House and Congress first received phone calls and faxes regarding “the space trade” it was evident that anti-black thinking was a common characteristic of many white subjects. Bell writes, “At least a third of the flood of phone calls and faxes urging quick acceptance of the offer expressed the view that what the nation would give up its African-American citizens – was a worthwhile as what it would receive. The statement accurately reflected relations at the dawn of the new century. The President had, like his predecessors for the last generation, successfully exploited racial fears and hostility in his election campaign.

There had been complaints, of course, but those from his political opponents sounded like sour grapes. They, too, had tried to minimize the input of blacks so as not to frighten away white voters.” This inhumane decision, demonstrated by the white race, to banish all blacks without knowing where they will go solidifies the fact that whites will never allow the black race to become part of the American people. This unethical act toward black Americans allows the reader to understand that racism will continue to exist in the American culture, and that inhumane acts toward man can indeed exist. If the aliens wanted the white race would America be so willing to release them? Absolutely not!! In my opinion, the major motivation for this country is for blacks to not have anything whites do, and by accepting “the space trade” offer that goal would be accomplished.

The fact that the offer was even considered was unconstitutional, but it just reiterates the reality that throughout American history blacks have always been hated. Professor Golightly was aware of this hatred toward black subjects, and when he spoke to the cabinet members after the trade had been offered he said, “It is a mark of just how far out of the mainstream black people are that this proposition is given any serious consideration. Were the Space Traders attracted by and asking to trade any other group – white women with red hair and green eyes, for example – a horrified public would order the visitors off the planet without a moment’s hesitation.

The revulsion would not be less because the number of persons with those physical characteristics are surely fewer than the twenty million black citizens you are ready to condemn to intergalactic exile…” Bell’s concept of “the permanence of racism” in the U.S. is comprehended by “the space trade”, and by looking at “The Space Traders” as an allegory, one is able to understand that American is not about the will of the people but about who has the power and guns.

In “The Space Traders”, there is a direct correlation between the abstract subjects of late twentieth-century racial politics, and Bell’s concept of “the permanence of racism” in the United States. Bell’s ability to symbolize the characters in “The Space Traders”, allows his readers to comprehend his belief that racism will always exist in America. In conclusion, it is my belief that a color line will always exist in the U.S. between white and black subjects, and that this country’s political and social structure is centered on the will of the white race. 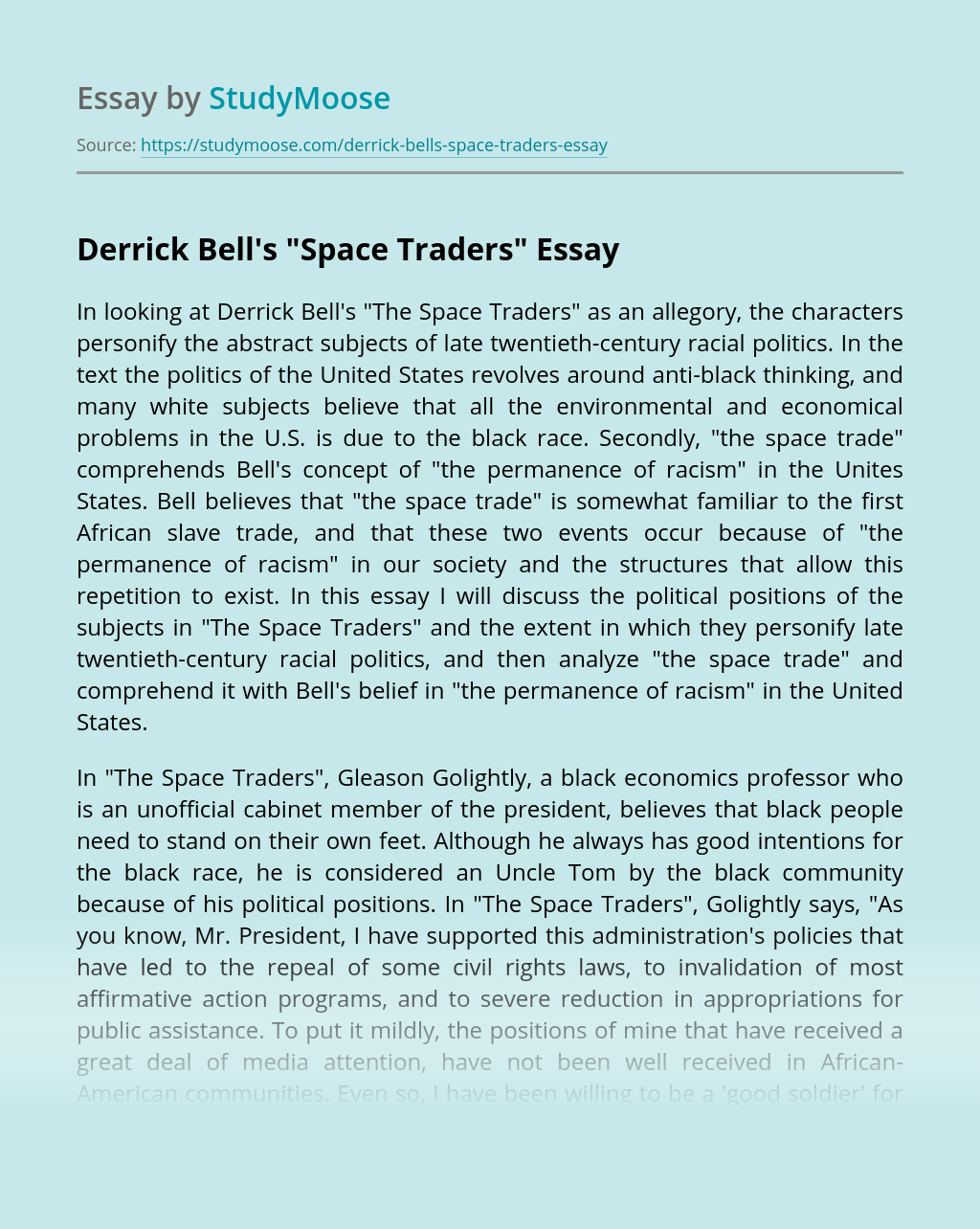