Samuel P. Huntington shocked the world in 1993 when he published “The Clash of Civilizations” in the journal of Foreign Affairs. Huntington states “most important conflicts of the future will occur along the cultural fault lines separating these civilizations from one another” (Huntington 1993, 25). He claims future conflicts after the Cold War will involve divides, disagreement and splits between cultures, races, religious beliefs. Huntington states his theory as “the fundamental source of conflict in the new world will not be primarily ideological or economic, but from cultural divisions” (Huntington 1993, 22).

Don't use plagiarized sources. Get your custom essay on
“ Samuel P. Huntington’s Clash of Civilizations ”
Get custom paper
NEW! smart matching with writer

Political and economical cultural differences are crucial to understanding and maintaining a stable country. Huntington hypothesizes future conflicts will derive from cultural and religious divides and claims Nation States will be the most important actors. He further claims the cultural clash will be at two levels. The micro level is where “civilizations struggle, often violently, over the control of territory and each other” (Huntington 1993, 29).

The macro level is where “civilizations compete for relative military and economic power … control of international institutions … and competitively promote their particular political and religious values” (Huntington 1993, 29). Understanding the micro and macro levels of conflict is important because religion creates a culture.

Culture then influences politics and politics can create clashes between civilizations. Conflicts between Israel and Palestine, India and Pakistan and/or Russia and Chechnya are examples of the cultural clashes at both the micro and macro levels. Huntington published his essay two years after the end of the Cold War when political scientists were searching for a new threat stream which would cause a new source of conflict.

Huntington’s Cold War perspective and the “West versus the rest” point of view are referenced in his essay (Huntington 1993, 39). No two groups of civilizations are exactly alike. For example, the United States and Britain. Although The United States and Britain speak English, many customs and traditions are completely different. Huntington concludes with the bottom line “civilizations… will have to learn to coexist with others” (Huntington 1993, 49).

Huntington’s main argument is broken into six different sections. The first section is why civilizations will clash followed by six examples of globalization. Second section describes the fault line between civilizations such as Muslim versus Hindu. This would be
followed by the third section of civilization rallying such as the Muslim uprising in the Middle East. Section four discusses the West versus the rest then the fifth section covers the Confusion-Islamic connection. Huntington completes his essay with implications for the West. His first section discusses differences among civilizations where each civilization is differentiated by history, language, culture, tradition, and religion. Huntington says the world is becoming a smaller place yet does not make any reference to global economy or wealthy versus non-wealthy nation states. He references perspectives between the United States and the European Union regarding North African culture which migrated to France (Huntington 1993, 28). The above mentioned example is important because Huntington describes four different perceptions regarding a North African who immigrated to the European Union. “An Ibo may be … an Owerri Ibo or an Onitsha Ibo … in Lagos he is simply and Ibo. In London, he is Nigerian. In New York, he is an African” (Huntington 1993, 26). What Huntington fails to incorporate non-state actors such as Violent Extremist Organizations (VEO) and states with empowered persons.

With a few exceptions, most nations will not clash over territory or land; however, will clash over political power and control of a country (Huntington 1993, 27). Economic regionalism is increasing and successful economic reform will reinforce civilization-consciousness. The “have” versus the “have not” are crucial in any culture and religion. For example a Saudi prince, will not worry about their day-to-day survival while an Afghani nomad does. Huntington’s bottom line is “the fault lines between civilizations are replacing the political and ideological boundaries of the Cold War as the flash points for crisis and bloodshed” (Huntington 1993, 29). Huntington then describes threats as fault lines between civilizations of Western Christianity, Orthodox Christianity, and Islam. He uses the following historical examples from the Moorish inquisition in Spain, Muslim and Hindu cultural clashes and ethnic cleansing in the Eurasian continent. In my opinion, Huntington does not clearly distinguish between threats, challenges, and opportunities throughout his essay. Most of his examples are historically based where a threat turned into an opportunity and at times a challenge with the exception of a few countries.

“With the Cold War over, the underlying differences between China and the United States have reasserted themselves in areas such as human rights, trade, and weapons proliferation” ” (Huntington 1993, 34). In other words, “… a new cold war … is underway between China and America” (Huntington 1993, 34). This new cold war is definitely a challenge, a threat, and an opportunity. China militarily is a threat to the United States mainly in size differences. Both countries are culturally challenged; however with increased internet and global communication this gap is decreased. The United States and China will continue with economic and global trade. China offers inexpensive manufacture and labor, however, allegations of possible human rights violations persist. The United States conducts international trade with China to maintain economic capital, foster good relations, and improve human rights issues in China. This is a perfect example of Geopolitics which is defined by Merriam Webster as “the study of geographic influences on power relationships in international politics.” I agree with Huntington’s following points “the principal conflicts of global politics will occur between nations and groups of different civilizations” (Huntington 1993, 22). Throughout history nations go to war for political, religious and economic differences. A perfect example is the American Revolution when America fought for independence from the Britain under the ideology of “No Taxation without Representation” (McCullough 2001, 61).

Global politics always influences and creates points of contention for possible future conflicts and clash for civilizations. I disagree with Huntington when he states “most countries and most religions the people active in fundamentalist movements are young, college-educated, middle-class technicians, professionals, and business persons” (Huntington 1993, 26). This quote is from a pure Western point of view derived from a Cold War philosophy of only the educated will liberate the uneducated. The terrorist attacks on the World Trade Center in New York and the Pentagon in Washington D.C, demonstrates VEO actions were split between culture and religious lines not economical or educational lines. I believe Huntington never believed a VEO, such as Al-Qaeda, would be capable of conducting a successful large scale simultaneous terrorist attack on the United States. I also disagree with Huntington on when he states “conflicts between civilizations will be the latest phase in the evolution of conflict in the modern world” (Huntington 1993, 22). This is nothing new.

Wars have been fought for control of religious and cultural ideologies such as the Moorish inquisition in Spain (Huntington 1993, 31). The United States entered the European Campaign in World War II to defeat Hitler’s extermination of Judaism in the world. This example of a clash of civilization occurred over sixty years ago. The potential for a clash of civilizations is relevant in every Operational Environment (OE), in all military operations, international conflicts, and global economy. In my opinion, culture, religion, customs, and traditions are essential for success in any OE. A failure to understand the political, military, economic, social, infrastructure, information, physical structure and time (PMESII-PT) or deploying without any OE preparation is unacceptable! As a Special Forces Officer, I am reminded of cultural and religion influences when working with Partner Nation counterparts or in a foreign country. Understanding the culture and religious differences are the backbone of Special Forces.

These influences allow an insight to better understand a threat. There is a difference between understanding and accepting a culture or religion. No individual or group has to accept the culture or religion; however, one has to understand in order for success. For Special Forces Officers and NCOs, this understanding is a requirement. The United States and China have an economic potential for macro lever conflict. On the other hand the United States and North Korea have a military potential for macro level conflict. I can only speculate that conflicts will include a division between economic and fundamental terrorist activities at the macro level. The Revolutionary Armed Forces of Colombia (FARC) and the Government of Colombia or the Morsy sympathizers and the Government of Egypt are examples of conflicts at the micro level. The U.S. Army will be called for full spectrum operations and an understanding the religious and culture is essential for mission success. 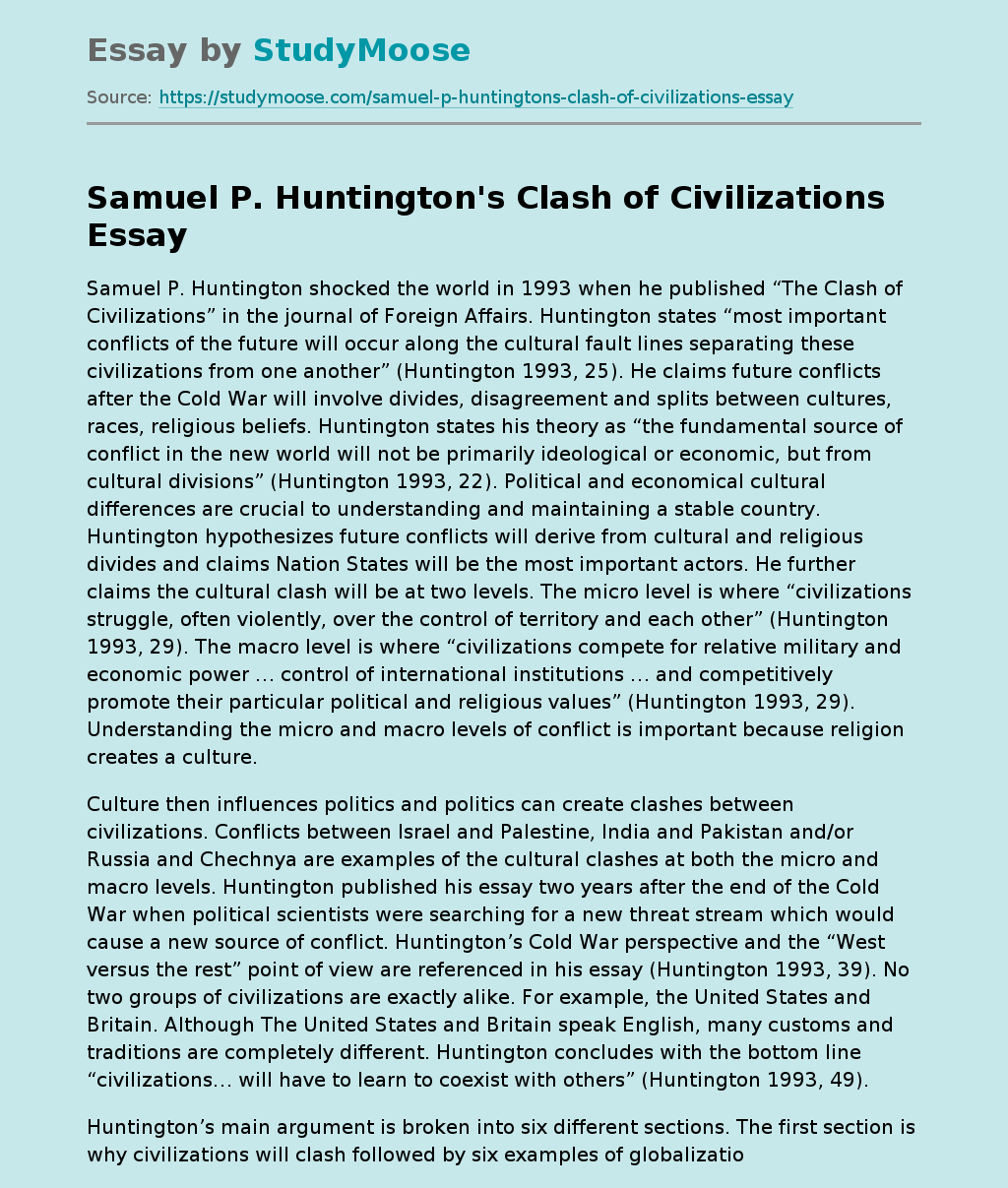