Though the issue looked like personal conflicts on the face, it actually stems from the friction between two departments fundamentally different in their working methods and thought processes. The fact that the two managers, Ellen and Ronnie, with different working styles leading these two departments has only compounded the problem. Ellen’s complaint was that Ronnie’s team is not sending their timesheets in time, which is leading to late payments from the insurer and shortage in cash flow. Even Ronnie acknowledges this but the solution appears to be different in each other’s minds.

Don't use plagiarized sources. Get your custom essay on
“ Management Issues When Key Employees Clash ”
Get custom paper
NEW! smart matching with writer

Ronnie is adamant that they just need more time, while Ellen is saying that genuine effort is required, not just time extensions. As much as possible, company should not leave any process to individual’s judgment. As long as the company does not have a proper procedural framework to ensure both the silos work together, any personnel change will not work. Company’s leadership should stop this before it trickles down to individual team members and takes a dangerous transition as a war between two departments that are key components in the organizational setup.

Each of three main characters played their own role in jeopardizing the healthy working environment.

Mathew’s biggest fault was not to clearly stating the business mission of the company because that is what employees such as Ellen (who will go by the rules) will refer to repeatedly. By trying to run Florida business from Chicago, he gave the impression that profits are most important and do not care about smaller details of how Florida managers conducted business.

If only he had been in Florida, he might have been able to cut this issue in its grass roots without letting it go out of bounds. Moreover, he promoted Ronnie to a managerial position for the first time based on this exceptional performance over the time and did not emphasize on proper transitional training to Ronnie. He just assumed that the individual excellence would somehow translate into managerial success.

In his prior role, success depended solely on his actions. He probably is under the impression that if each of his team members performs well as individuals, it will enhance the performance of the whole team. Over his career, nobody questioned him as he was always up to the task. He is taken aback when, all of sudden, Ellen started questioning his working style and demanding him to do some things. As the article “becoming boss” talked, Ronnie should feel he is responsible for enhancing his group’s performance rather than limiting himself to making sure his team functions smoothly. He should align his team objectives so that they complement the overall organizational strategies and direction. He is also too much concentrated on the mission of helping patients and ignored other functions that keep the ship moving forward.

Ellen was confrontational towards Ronnie and behaved in a manner that projects profits are superior to customer service. While profits and cash flows are important, they cannot come without serving their customers (children). Ellen should understand that business is nothing without the actual fieldwork that clinicians are doing on a day-to-day basis. She just cannot blame Ronnie and his team is not submitting the paper work. Instead, she could have come up with some sort of creative and integrative solutions keeping all players in mind.

The main actors who are the center stage of the problem – Mathew, Ellen and Ronnie – are primary stakeholders. This issue also directly affects all the employees working under Ellen and Ronnie. Secondary stakeholders include all other employees, the private investors supporting the company, all those kids who are patients of Kid Spectrum and the local community.

There is no one shot solution to this, it does not happen overnight. Each of the three main actors will have to play constructive roles to correct things and to make sure they create healthy work environment. One real advantage is that both are committed and very loyal towards the organization and its betterment. Both are good at what they do but they should work complimenting each other instead of being an obstacle to each other. The major onus is on Matt to clear this issue before it turns out to be a potential danger to the business bottom line. While personal change is one of the potential steps to take, I am not sure if it will achieve anything fruitful at the end. The focus has to shift from personality conflicts towards common understandings and clear directions.

Moreover, Matt does not have an immediate replacement for either of the two and I personally think it is not necessary to change either of the two managers. Matt needs to act tough and simultaneously demonstrate that he has command over any others, that he is part of Florida team and not an outsider. He has to retain both the employees and direct them in such a way that they use their full potential to contribute towards growth of the business. He should meet with both managers and make them realize that, though both are committed to the betterment of the company, their individual differences are makings matter worse and have potential to harm the company on contrary to their wishes. He needs to let Ronnie know that submitting timesheets in time is essential for the cash flow, which in turn will help the company to perform other functions smoothly.

He also needs to let Ellen know that Customer (Children) focus is very important and she has to do everything to assist clinicians to perform their job better. He would have to push each manager to stop complaining and ask to come up with some solutions. He has to play different roles at the same time – Boss, Director, mediator, facilitator, and non-judgmental third party. Alternatively, he can use Arthur to look after the overall business operations of in Florida. After all, it looks like Arthur is missing the work and is eager to work. At the very least, Arthur will be helpful to give an unbiased report on what actually is going on. Ellen should understand that business is nothing without the actual fieldwork that clinicians are doing on a day-to-day basis. In any case, she should not vent her anger anywhere except in Mathew’s presence, as doing so will only damage the morale of other employee’s. Moreover, she might also lose her peer’s confidence when she needs it very much to accomplish her tasks.

As Ronnie and his team are not aware of the difficulties in not turning recording time properly, Ellen should come up with some hard figures showing the lag in receiving payment when employees do not submit timesheets in time. Talking vaguely about cash flow will not hit the intended audience in an effective manner. Ronnie has lot of support from his subordinates and he should use that support in a way to enhance the organizational capabilities. He would have to monitor the workload of his employees carefully, which might have forced them to take time off after holidays. He has to take ownership of these increased responsibilities and try to cut down his field visits and instead focus on increasing the efficiency of this team by providing proper directions from the top.

Rather than concentrating too much on differences, Ronnie and Ellen should start their discussions from the common ground to both, which is the long-term survival/growth of the company. They need to realize that they are interdependent and cannot exist without other’s support. Each should look at the difficulties the other person might be facing in their daily work routine and start appreciating the fact that both are working towards the same goal. Essentially, they have to come to the terms and agree that they have to solve this issue themselves for the sake of the company. Nevertheless, it is imperative to change company’s culture to encourage clinicians to submit their timesheets on time.

There is atleast couple of ways to do this. One way is to introduce an incentive/reward/recognition system for clinicians who turn their timesheets in time. Alternatively, Organization can come up with software that makes it easier for the clinicians to log time automatically when they are on a field visit. This will make the time sheet entry a hassle free process and eliminates the need to send them to the head office on a regular basis. The key behind this thought process is that the clinicians should be willingly committed to the timesheet submission rather than neglecting it until Ellen or the other back office staff are behind their backs. Company has to identify milestones and track the progress of any such measures.

Possible Weaknesses of the proposed solution

The whole process of trying to bring behavioral change is time taking process and may not work well if we time constraints are making their presence felt. It might be too late before any of the above-mentioned changes happen and the company might suffer considerably during the process. The two managers are very competitive and good at what they are doing. Matt will have to take utmost care in trying to bring change in their thought process because as soon as they see what Matt is trying to do they might turn their back and look for alternatives elsewhere.

This is classic example of individuals quickly forgetting the bigger picture when involved in personal conflicts. Both functional departments are important as well as both the leaders who excelled in their respective fields of work. In this case, both managers need some behavioral guidance and management has to realize that it may take some this before this might take place and plan contingencies accordingly. Matt should tackle this issue as early as possible when it is still in its grass roots and direct the competitive spirits his personnel in right direction, which helps business to grow. 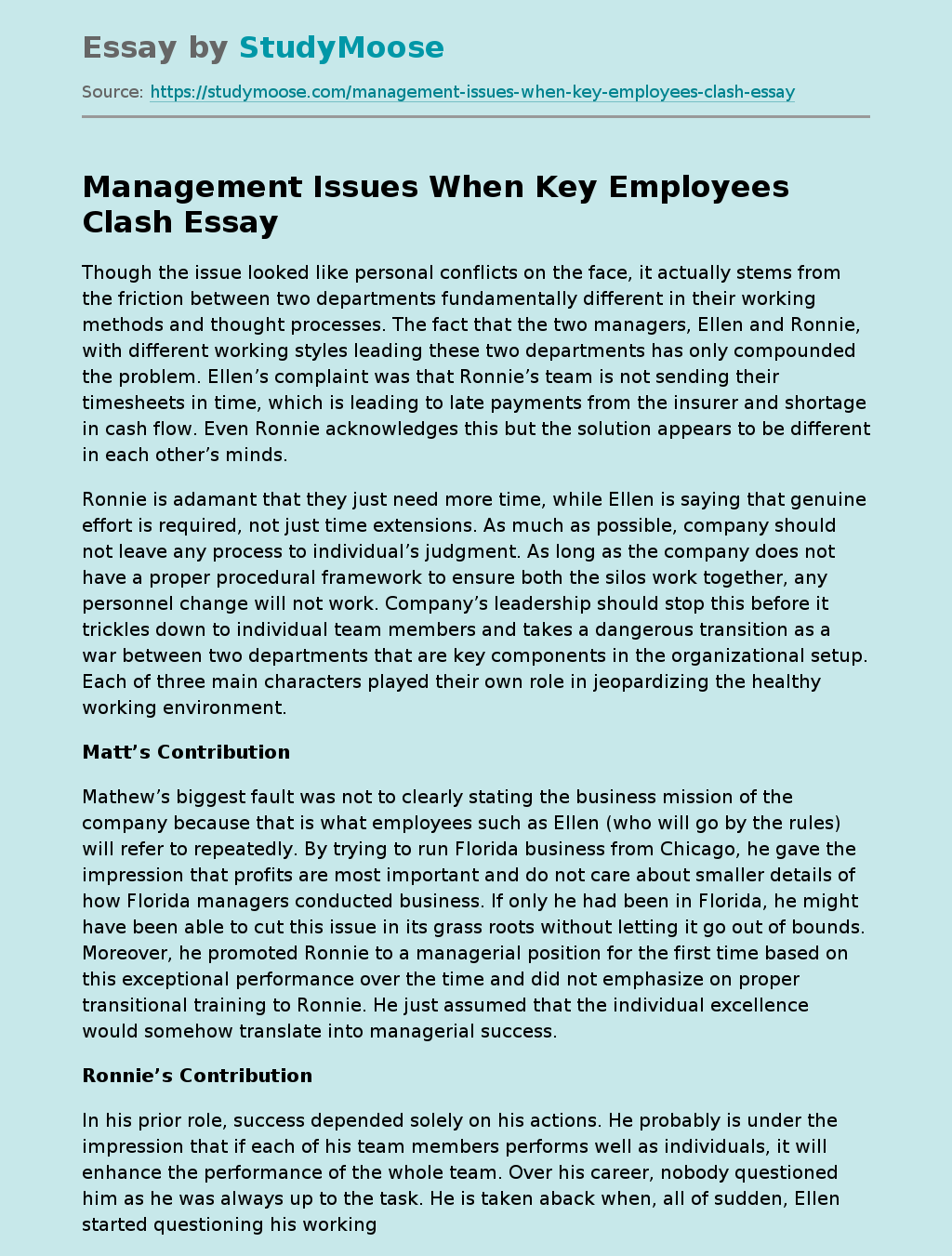