In 1991 Dr. Bernadine Healy took over as president of the Red Cross from Elizabeth Dole. Dr. Healy style of leadership was more like that of an entrepreneur rather than a bureaucrat. She was encouraging of change, shrewd in detecting inefficiencies and decisive in her actions.

Don't use plagiarized sources.
Get Your Custom Essay on Analysis of Dr. Bernadine Healy Just from $13,9/Page

She did not see the need to build consensus, assuming an allegiance on the part of others to her goals. The board and old guard of the Red Cross expected Healy to adjust her head-on style to their softer approach, to work within their structure. This made Dr. Healy attempts of changing the Red Crosses Culture as well as their system of operating a very daunting task. While Healy and the Red Cross were both striving for the same goal, serving the public good, their methods and expectations were vastly divergent.

When Healy uncovered significant fraud in one of her Jersey City, N.J. chapters, she immediately turned it over to the local prosecutor’s office, which indicted the director and bookkeeper for stealing funds from the Red Cross. However, instead of praising Healy, several board members criticized her for being “too tough” in Jersey City. Healy hard charged style was effective but made governors of the Red Cross very uncomfortable. Healy was original chosen to lead the Red Cross because she brought to the table a strong background in efficiently managing large, complex organizations. As its leader, however, Healy neglected to make room for the Red Cross operationalized institutional values; she misjudged their tenacity and failed to adjust her leadership style to the organizational culture.

As a result, she was unable to maintain a legitimate authority and enact her vision of the organization’s greatness. Within two years, she was forced to resign, because many of the board members disliked her strong political views. After a governor’s vote on the confidence in her leadership went 6 in favor of Healy and 27 against her on October 23rd, Healy publicly announced her resignation as president of the Red Cross three days later. 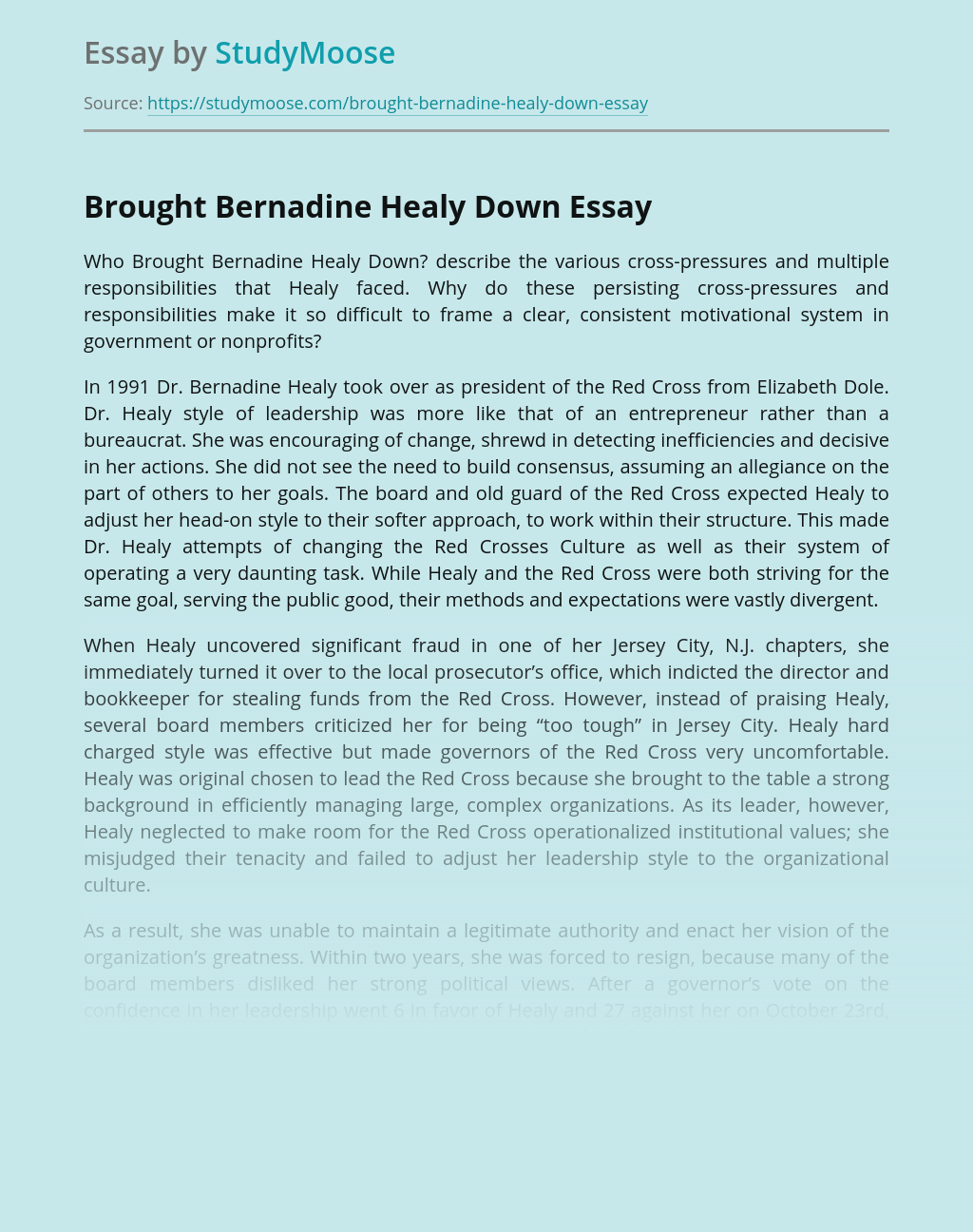 Leadership lessons from the movie “Invictus”

Invictus is a biographical film based on the book Playing the Enemy: Nelson Mandela and the Game That Made a Nation. The story of the film revolves around Nelson Mandela’s efforts and strategy to unite the South African society that is torn apart by apartheid. Upon being elected as the first black President of the...

This practice exercise will help you understand the relationships between business strategy, tactics, functional alignment, and the Foundation® simulation. We will use the Chester Company for this example. (During the practice rounds, each company is assigned a different strategy.) You will execute your plan by inputting the decisions described below. At the same time, your...

Get Essay
Performance pay for MGOA Physicians (A)

On a warm day in June of 1998, Dr. Harry Rubash stood in front of a bookshelf in his new office arranging photographs of his family and former colleagues in Pittsburgh. He looked out his window to the profusion of hospital buildings and tangled Boston streets below. It was a good picture, he thought, of...

The Role of Leadership in Shaping Organizational Culture

Abstract In this paper I have tried to analyze the role of leadership in shaping of organizational culture. Also I have briefly touched the definition of culture, historical overview of leadership theory development’s issue and what impact have traits approaches, skills approach, style approach and also ethical approach on creating of organizational culture for healthy...

A leadership style is the manner and approach of providing direction for a team, implementing plans and motivating people to complete a task. The different types of leaderships used in the public services are – Authoritarian- Autocratic Leadership is a leadership style characterized by individual control over all decisions and little input from group members....