The culture clash in Two kinds occurs between Amy Tan who has become “Americanized” and her mother who is still very much under Chinese influence. Amy’s mum believes strongly in “The American Dream”

Shows the large amount of Aspiration and hope in her mother’s mind about the future for Amy. Her mother continues the idea that Amy could be a star in America when she says

“You can be best anything”

Not only does the statement reflect her ambitions for Amy and beliefs but also her broken English represents that she is still very much Chinese.

Don't use plagiarized sources. Get your custom essay on
“ Culture Clash in “Two Kinds” and “Dead Mans Path” ”
Get custom paper
NEW! smart matching with writer

Amy takes a rebellious stance when her hair cut goes wrong, and claims she likes it as it was not what her mother wanted

“I liked the haircut; it made me look forward to my future fame”

The phrase not only shows her rebellious side but also that she believes what her mother has said about being famous.

“I was filled with a sense I would soon become perfect”

The italics in the phrase represent the irony of it and also the certain amount of insecurity Amy feels. Amy’s mother is also ironic to a degree although she may not mean to be

“Searching for stories about remarkable children”

The irony continues as Amy is not remarkable, and her mother thinks she can be.

The fact Amy is not remarkable is brought up when she is asked to recall what she remembers from a page in the bible.

“Now Jehosophat had riches and honor in abundance. That’s all I remember ma'”

The phrase shows that Amy’s memory is poor and she is not exceptional.

Amy soon begins to dislike her mother methods of trying to turn her into a child prodigy, and the cultures start to clash as Amy’s mum still believes that she can be, but the Americanized Amy starts to dislike it.

“I hated the tests, the raised hopes and failed expectations”

“I promised myself, I won’t be what I’m not”

This shows Amy’s determination to succeed against her mothers will and not become a prodigy. The view that a Chinese girl could succeed in American is brought back to her mum three months later when she sees a little Chinese girl playing a piano on TV when Amy defends the girl her mother takes the traditional view that she isn’t trying and that’s why she’s failing

“Not the best because you’re not trying”

The phrase emphasis’s the mother’s feelings towards her daughter as in traditional Chinese culture it must be the child’s fault.

“That was something else”

In ambiguous phrase, her mum has a look on her face which rattles Amy and brings home what she’s done

“But my mother’s expression was what devastated me: a quiet blank look that said she had lost everything”

The phrase is powerful as her mum had lost everything, and Amy was her last hope.

“Only one type of daughter can live in this house, obedient daughter!”

This is one of the more important lines as it really shows the Chinese culture that children should be obedient and Amy is not. Amy’s American beliefs and nature are brought up when she says

“For unlike my mother I did not believe I could be anything. I could only be me”

This emphasizes the fact she is not a traditional Chinese daughter the way her mum wants her to be instead she has her own beliefs and lifestyle.

The first line of Dead Man’s Path emphasizes a culture clash, as the headmasters name is Michael Obi. Michael being a western name. So he obviously has western influence. And his clash begins with his views

Michael is critical of the older generation, which is probably a western influence but in most Nigerian towns the elders are to be respected showing a clash between his and African views.

“Everything will be modern and delightful…..”

The word modern is italicized to show that it is the opposite of the current village and the change Michael Obi wants to create.

Michael also tried to disassociate himself with the locals, and make himself sound better.

Shows not just disassociation in the phrase “these people” but arrogance, in believing he can show them how to run a school.

Both the plants are traditionally western showing Michael wishes to westernize the school.

The phrase scandalized shows just how amazed he is that the event has occurred; it also shows his feelings about tradition, that it needs to be removed. To be replaced by his modern ways.

“And what has that got to do with the school?”

The phrase is both pompous and patronizing and shows his ignorance in thinking that the two should be divided and religion/culture should be kept away from schools.

The priest when talking to Michael has a feeling of power and looks down on Michael.

The priest uses this opening phrase to create a feeling of inferiority to Michael he also bangs his stick on the ground to emphasize his point. Michael responds to the whole conversation in a very arrogant way,

Shows his intolerance towards the priests and villages beliefs, and shows how he plans to change traditional ways.

“I have no more words to say”

Shows the priest has been defeated by ignorance, and that the conflict between the cultures will not be resolved.

Both stories have culture clashes neither ending with particularly happy endings, However I feel that in Dead Man’s Path the culture clash is more straight forward in that it is traditional against modern. However two kinds is slightly more complicated as at first Amy seems to be trying to be traditional and try hard where as Michael never wanted any sort of tradition right from the start. Both culture clashes involve arguments and verbal disagreements, and some degree of action.

Amy ruining her piano piece in Two Kinds and the Michael blocking off the path in Dead Man’s Path. These are followed up by more action from the other culture; Amy’s mum continues to make Amy learn claiming she could still be a prodigy whilst the villagers tear the school apart. In Dead Man’s Path it is an antithesis however I feel that Two Kinds is less so and the ideas are more intertwining however I still feel there is a large culture clash. In both stories however it is clear to see that both traditional and modern views find it hard to live side by side. 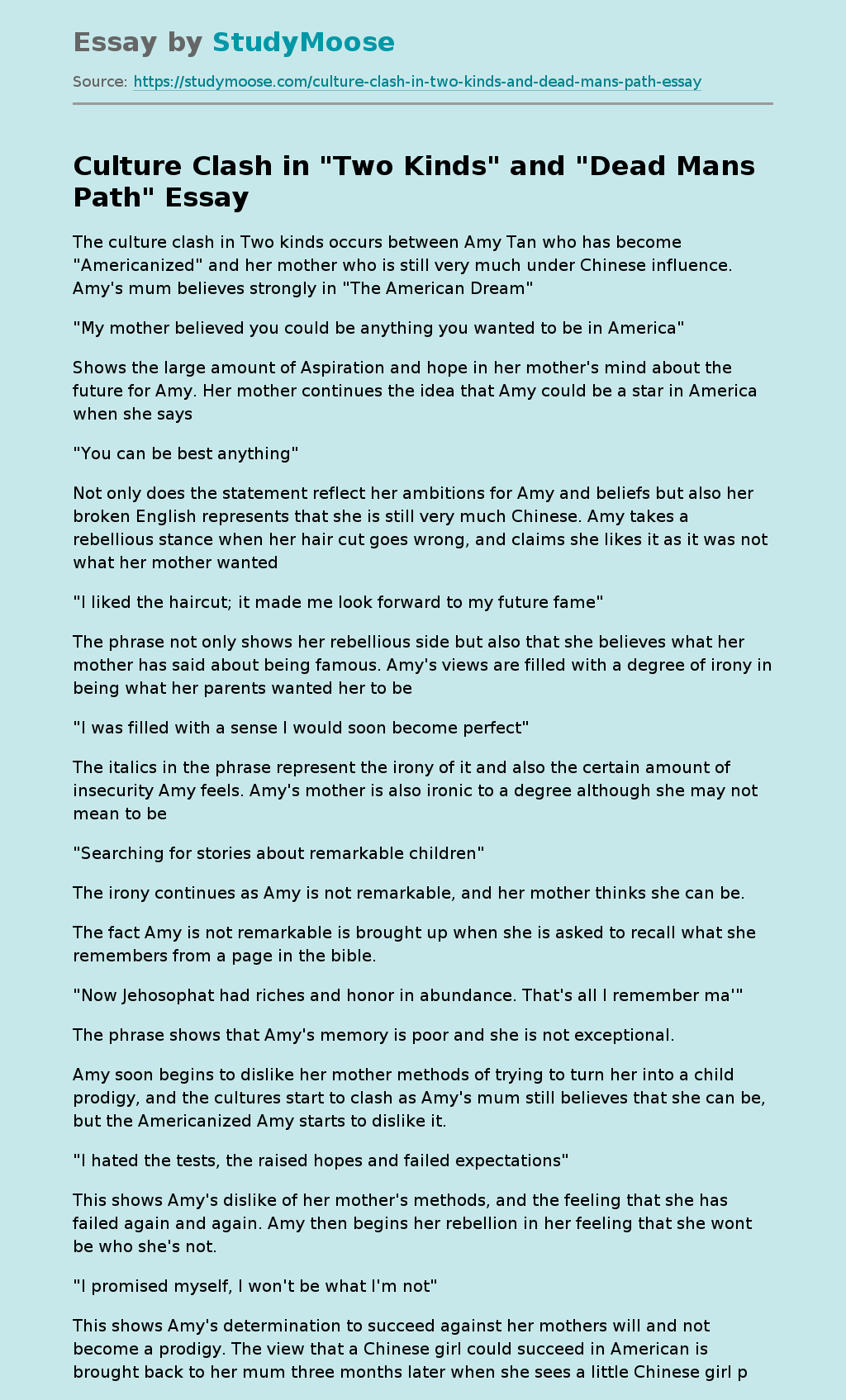