This shows that the court will believe what their heart believes and will not listen to what the person on trial has to say. Even though Mary was denying Proctor threatening her, Danforth seemed convinced that he had and kept asking her the same question over and over again hoping that she would give in and say that Proctor had threatened her. Much like Communism, when you are accused of being a witch, there is no hard proof; it is difficult to prove innocence and you cannot define exactly why someone is a witch.

Don't use plagiarized sources. Get your custom essay on
“ Salem and America ”
Get custom paper
NEW! smart matching with writer

Miller sets the play in the 1690s which is sensible because today there is not much unknown, but back then they were not as scientifically advanced as we are in the modern day. Things such as Betty falling ill would not seem strange if it were set in this era. The language which Miller uses is a mixture of different types of vocabulary. He mixes together the typical language used in 1692, and a more modern day language.

This is better for linking the story to what happened in America in the 1950s. He used regular sounding language which they would have used in 1692.

For instance he used techniques such as double negatives. Also he uses language such used in a more modern day world, like they would have used in America 1950s. This creates almost a new language which keeps readers interested: Danforth: Strike hard upon me that she will dare come here with such a tale.

Now, Mr Proctor, before I decide whether I shall here you or not, it is my duty to tell you this. We burn a hot fire here; it melts down all concealment. In Miller’s lecture about The Crucible Miller says:

The Crucible straddles two very different worlds to make them one, but in the usual sense of the word it is not history but rather a moral, political and psychological construct that floats on the fluid emotions of both ears. Miller made a comparison in several of his characters to McCarthy himself. Thomas Putnam is much like what McCarthy was like in the 1950s America. They were both greedy men putting themselves first. For instance, Putnam thinks of himself before others by doing whatever it takes to gain land and wealth. He would make his daughter accuse people of being witches, even though he knew that they weren’t.

He did this because he knew that when they were convicted they would be put into jail or even given the death sentence. When they were sentenced or executed he knew the land would be sold for a very small price. You can see that Putnam is very selfish and obsessed with his wealth and land on page 36 when he is talking to John Proctor: Proctor: In your bounds! I bought that tract from Goody Nurse’s husband five months ago. Putnam: He had no right to sell it. It stands in my grandfather’s will that all the land between the river and – McCarthy as a character was very similar to several characters in Miller’s play, especially Putnam.

He wanted to have as much authority and power as he could. If anyone got on the wrong side of him he would blame them of being a communist, and this would be difficult to disprove, so more than normally after the trial the person would be given a jail sentence. In the play the other character most like McCarthy is Abigail Williams, she is a very strong comparison to him. She is still selfish and looks out for herself even if it means letting others hang. All she wants is to be with John Proctor, a married man who is well respected in the community.

She will try whatever it takes to get him, even accuse Goody Proctor of using witchcraft. Abigail is very manipulative and she can manipulate the situation very well. She is seen as the leader of the girls and they all do as she says. Abigail exerts her influence over others and leads the hysteria which Salem is going through. Abigail has a destructive influence on Salem. All of this can be seen in the scene where they are in court. Abigail had accused Mary Warren of being a witch. When ever Marry had said something the girls repeated it straight after. Abigail: She sees nothin’!

Mary Warren: Abby, you mustn’t! Abigail and all the girls: Abby, you mustn’t! This shows how Abigail can control the other girls and make them do as she wishes. She is seen as the leader and she takes advantage of this. Arthur Miller successfully shows the comparison between Abigail Williams and McCarthy. Repetition is used here to emphasise the effect of hysteria. This shows how society is being corrupted by the fear of witchcraft. This also shows how far Abigail is willing to go to, to get what she wants. She makes it clear that Mary is a witch and she is guilty by making the girls mimic her every word.

The Crucible is a play which uses racism as a theme. Black represents bad, white represents good. Miller uses this in his play a lot to bring out the situation in America during the 1950s. Racism was an issue and not much was being done to solve it. This is reflected in the play. All things bad are represented as black. “Black allegiance,” and “black hearts,” page 105. White is seen as the colour of goodness. “Your soul alone is the issue here, can you not prove its whiteness,” page 122. You can see that this is a link to America during the 1950s because that is how they saw the different races.

White was seen as good and black was seen as evil. For instance, heaven is described as white and hell is described as black. On page 105 Danforth says: Danforth: Will you confess yourself befouled with hell, or do you keep that black allegiance yet? Suspicion is a theme which runs through the play and brings such a tense atmosphere to the story. After the outbreak of “witch-craft,” in Salem no-one seems to trust anyone and suspicion pushes people to the edge. Miller uses personification very well to emphasise the suspicion sweeping through Salem. He shows emotions such as suspicion as people.

For instance when Elizabeth and Proctor are talking Elizabeth says “Suspicion kissed you when I did,” page 119. This shows more than one thing. Firstly it shows suspicion as a person kissing him, which it obviously cannot do because it is an emotion. Also this shows that Elizabeth was suspicious of him. At the same time she kissed him suspicion did as well. Not only does he use just personification. John Proctor described Elizabeth by saying “still an everlasting funeral marches round your heart. ” The simile is affective because it shows how Elizabeth is feeling at the time.

She almost feels dead inside and she has nothing to live for. Throughout the play Miller employs a lot of religious imagery. This is very much like 1950s America. This emphasises how the small town has changed from an innocent, religious town into something the town would have been dreading to become before. It shows just how the devil is “loose” in Salem. Really the devil is not loose, they are experiencing hysteria and they sound fanatical. On pages 74 – 75 John Proctor says: Proctor: Now Hell and Heaven grapple on our backs, and all our old pretence is ripped away.

This not only shows how Miller has employed personification and religious imagery to show hysteria but it also shows the contrast between Heaven and Hell, white against black. Another quote which shows Miller using these techniques to show the effects of hysteria is on page 105: Proctor: A fire, a fire is burning! I hear the boot of Lucifer, I see his filthy face! And it is my face, and yours, Danforth! For them that quail to bring men out of ignorance, as I have quailed, and as you quail now when you know in all your black hearts that this be fraud – God damns our kind especially and we will burn, we will burn together!

In this speech by Proctor we can see how Miller has combined many literary devices to produce the effects of hysteria. In this speech Miller has combined the effect of racism, white against black, showing good against evil; he has used Religious imagery to show how Salem has been transformed by the witch hunts and the repetition of the word “quail” suggesting that Salem has cowered and become a town which cannot control itself any longer. The speech shows human belief in diametrical oppositions of good and evil, for example Christianity and the devil.

Miller cunningly makes John Proctor the spokesman for his own beliefs. Proctor is a character full of opinion and pride. This is the character Miller reflects himself through. Miller makes sure that Proctor has very powerful and memorable speeches so that people will clearly see and remember Miller’s view on America 1950s. Proctor: No, no I have signed it. You have seen me. It is done! You have no need for this. Danforth: Proctor, the village must have proof that – Proctor: Damn the village! I confess to God, and God has seen my name on this!

It is enough! This shows just what Miller thought of the situation in America during the 1950s. Miller thought that it was unacceptable when someone was accused of being a Communist there was no way out and the only way to get away from a jail sentence was to confess of being a Communist. Miller did not agree with this and he shows this with what Proctor then does. When he is told that he must tell the village about being involved with witch-craft he refuses because he would rather die than blacken his name.

He says that he has given him his soul, all he is asking is to keep his name, for you only have one in your life time. To conclude my essay, the play seems to be a parallel to the era of McCarthyism in America during the 1950s. The situation in America is also the main Allegory in the play and a very effective one at that. People were put on trial all the time in America, much like in the Salem witch hunts. Both Salem and America were put into fear, paranoia and hysteria through the fear of the unknown, something that cannot be proven. 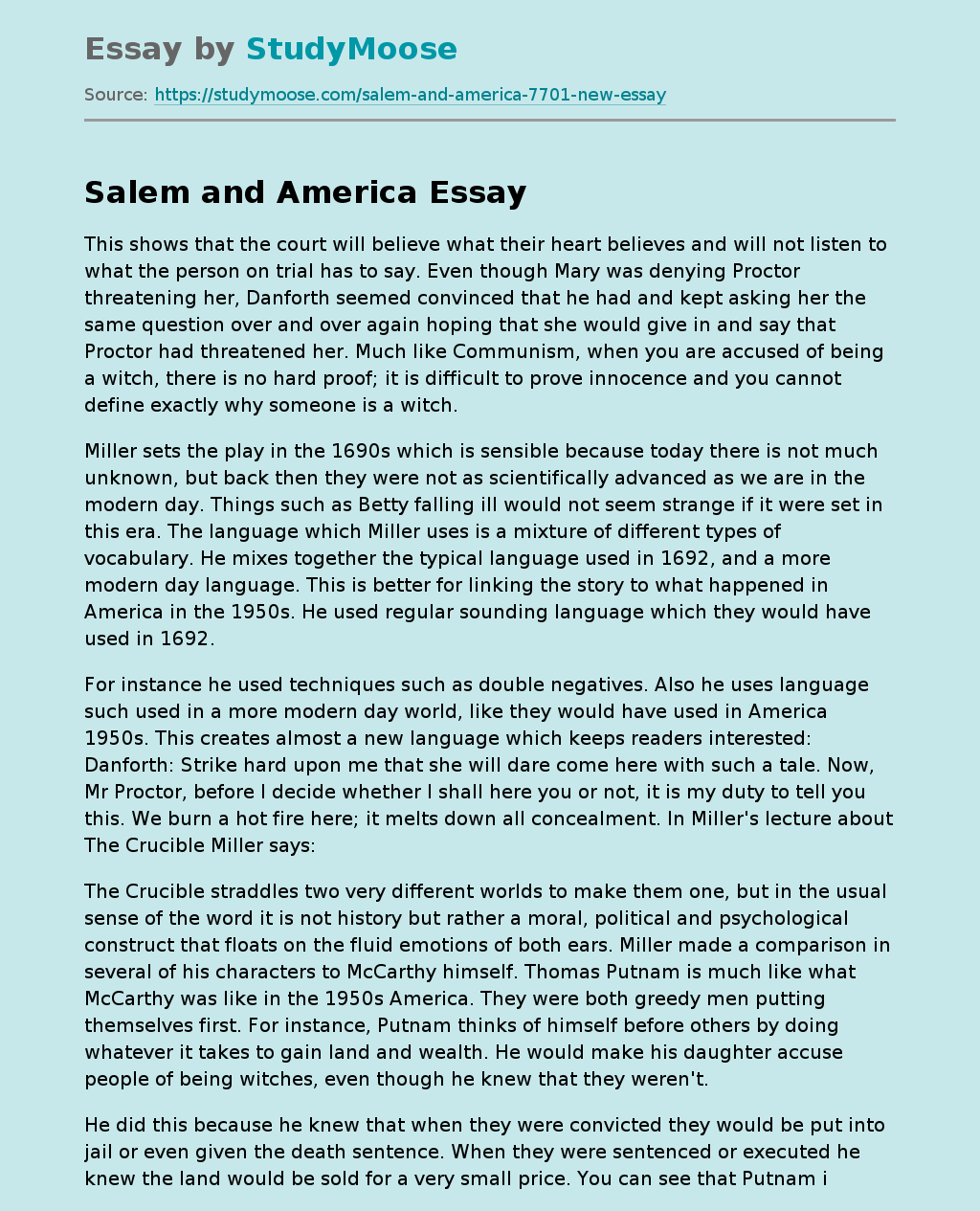