Edmond Rostand’s magnificent captivating play Cyrano de Bergerac features a very fascinating character in the person of Roxane. The play’s main protagonist is none other than Cyrano. Cyrano is the French soldier and poet who is challenged by the dilemma that he can never win Roxane’s heart with a hindrance such as a big nose.While Cyrano is the main protagonist in the play, further emphasis is given to Roxane due to the subliminal notion that the story revolves around her.

Roxane’s has many suitors, yet she simply ignores their advances. The sub-plot that a handful of suitors are competing for her love is the argument, which begets the main plot of Cyrano.

Cyrano is reluctant in helping Christian to win Roxane’s love. Christian is easily Cyrano’s rival. He molds his image as a poetry connoisseur, and an obsessive gifted lover. Roxane falls for this image and marries Christian. Enter De Guiche, the French commander who sends Cyrano and Christian into the battlefield.

De Guiche intends to create conflict between Cyrano and Christian in order to make Roxane his. Eventually, the story leads to Christian’s demise, and Cyrano unable to propose his love for Roxane. The story ends with Christian’s true identity divulged in a final letter read by Cyrano to Roxane before Cyrano’s demise.

At the play’s prelude, Roxane’s character is portrayed as a witty young lady with a kind heart, and with a penchant for heroic morality.

She ignores the number of advances from her plethora of suitors. Roxane is a very lovable person. This is evident because she has many friends, attendants, and suitors who are more than willing to help her in any predicament she’s into. She is idealistic, which is a sign of her youth. Roxane dreams to be loved by the seemingly perfect man in the person of Christian. Her beauty fascinates Christian. She initiates a meeting in order to be acquainted with Christian. Roxane is enamored by Christian’s penchant for poetry and his candor as well. However, Roxane is disappointed by Christian’s lack of effort to manifest his feelings for her.

Roxane diverts his attention for Christian to Cyrano’s love for her, which creates a conflict for Cyrano and Christian during their stay in the battlefield as peers and rivals at the same time. There is a faint glimpse into her soul in these contrasting instances where the mere handsomeness of Christian is futile, yet the artistic evoking urges her to desperately kiss her love. This is how Roxane exclaims Cyrano’s eloquent plea for love and fulfillment. The feisty excitement created in her mind by clearer, poetic, and artistic declaration of love suggests a reflection of a tender love that appreciates the strength of human feelings more than anything else.

However, Roxane is a victim of the conventional feminine vanity of falling for excessive admiration and praise. Yet this thirst for physical prowess is diminished when Roxane risks her life to visit Christian in the battlefield. This suggests that her character is in love more than the physical aspect of Christian. Her love for Christian’s soul is exuded in this scenario. The play is at a crucial point when revelations could happen but the strict dramatization of Rostand’s makes it either impossible to know the truth or to know that Cyrano is the purveyor of the soul the she is deeply in love with.

Eventually, Roxane realizes that she’s in love with Cyrano, and not the beleaguered Christian. However, it is to late for such when he kisses the dying Cyrano moments after his apparent demise. The pent up anguish of having lost the only human soul she connected with; and living in its abiding memory with company of nuns is sacrifice of undying love. Roxane was very much desired after he lost his husband in the Spanish battle; she chose to wear the letter as a necklace as symbol of her love that was gloriously hers.

She will live her life with the rest of his memories. Foregoing the bitter memories would be easy for a young lady like her, yet she chose to live in the tradition of great lovers; only taking comfort whenever Cyrano visits her, and empathizes with her grief and sorrow. Upon reading Christian’s letter, she realizes that Cyrano is the real soul she’s been in love with. The realization sets her free from being enamored from the image of her lover. Roxane is capable of instilling empathy in the feelings of another lovelorn soul, but this time she realizes she’s the one who needs to be empathized. Upon realizing such, she was moved to tears.

The ending has suggested that Roxane’s character is easily moved, as well as her persona of love. She endured the premise that she only loved her suitor on the outside, and not his poetic and artistic soul. Roxane’s character is but a gullible person who can be lured by offering serenades that gratify her. However, this has changed upon the realization that there is a greater love beyond the surface.

The epilogue of the play has generated the notion that people are trying to fill the void of their beings through the quest of finding their soul mate in order to complete their inner beings. Roxane is quintessential romantic everyone aspires to be, until hints of practicality emerge. The surreal quality of love that completes itself not by consummation, but through the intensity of the passion makes Roxane the object of affection for male readers, and the subject of deification for female readers. 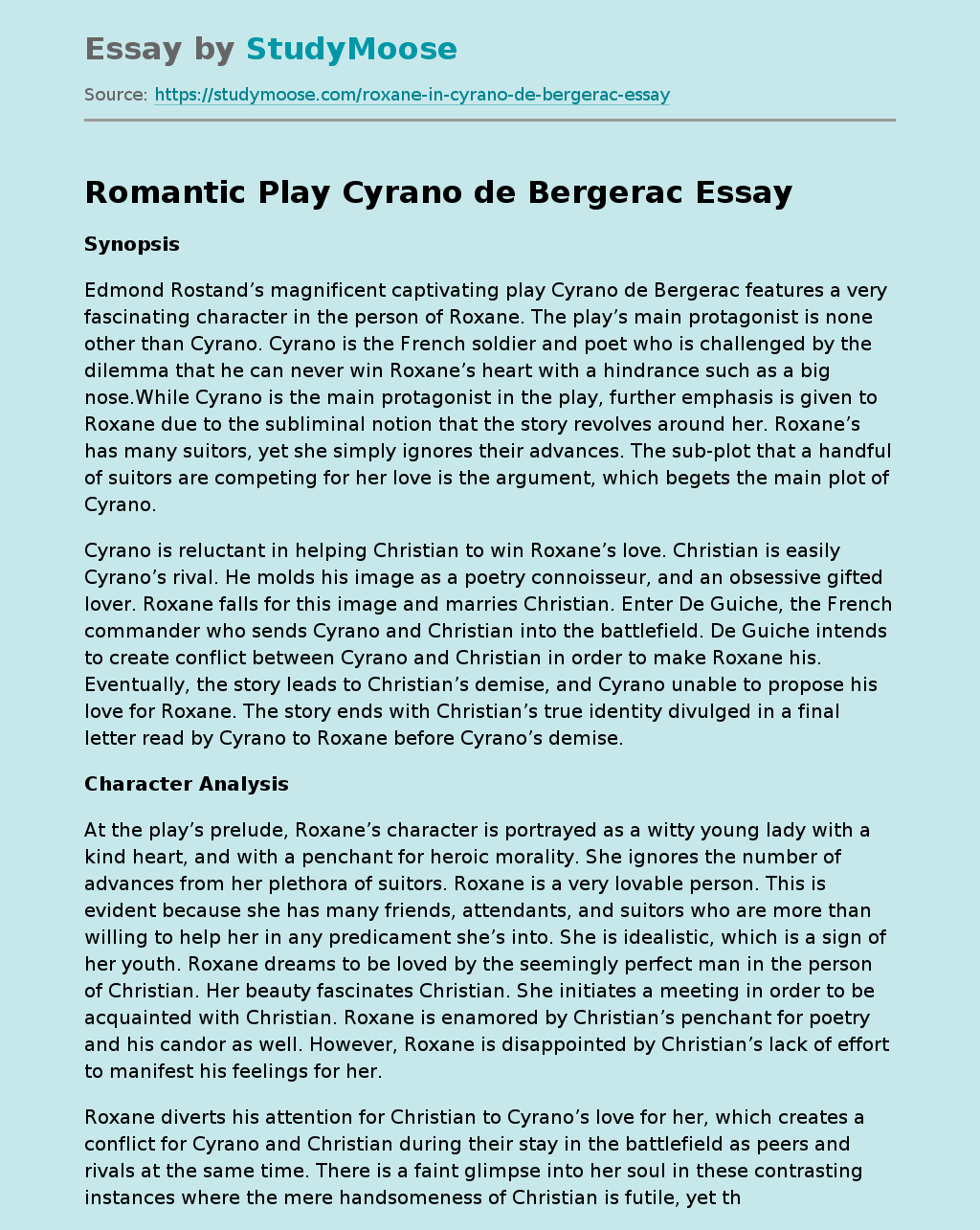