Romeo And Juliet Vs. The Sound Of Waves

Don't use plagiarized sources. Get your custom essay on
“ Romeo And Juliet Vs. The Sound Of Waves ”
Get custom paper
NEW! smart matching with writer

It is the theme that encompasses both books and makes them so much alike in content.

Juliet said to herself, “Deny thy father and refuse thy name, or, if thou will not, be but sworn my love, and I’ll no longer be a Capulet.” (p. 71) Although Hatsue’s and Shinji’s families were not rivals, Hatsue’s father heard a rumor about his daughter and Shinji that upset him very much. He therefore banned Hatsue from having any contact from Shinji. Hatsue said to Shinji, “Last night at the bath Father heard some very bad gossip about us and became terribly angry and commanded that I must never see Shinji-san again.

” (p. 110) Both families, for different reasons, did everything in their power to keep the loved ones apart.

The characters in both books also had to overcome obstacles dealing with their relationships. One obstacle that Shinji and Hatsue had to overcome was their not being allowed to see each other. Due to the bad rumors that Hatsue’s dad heard in the bath house, he would not allow Hatsue to get near Shinji. Hatsue wrote notes and placed them under the lid of the community water container. Shinji’s friend would pick them up and deliver them to Shinji. Passing notes helped Shinji and Hatsue pass the time and enabled them to communicate with each other. This obstacle was much like the one that Romeo and Juliet had to overcome.

Romeo had to escape from Verona in order to avoid being killed for disturbing the peace. Romeo had been fighting a Capulet. Romeo’s friend informed Romeo and Juliet about how each other were doing by traveling back and fourth between the towns in which they lived. Like Shinji and Hatsue passing notes back and forth, this word of mouth from a friend was the only way that Romeo and Juliet had contact. Although the characters in both stories faces the obstacle of not being to see each other, both couples were so much in love that they were able to find ways to stay in touch.

The influence that the secondary characters played on the main characters was much alike in the two books. Chiyoco, the housekeeper’s daughter, was awayon vacation. Her mother sent her a massage to tell her to come home. The book reads, “Chiyoko was still tormented with feelings of guilt, and she went on to say that unless Shinji and Hatsue finally found their happiness, she herself would be too ashamed ever to come back to the island.” (p. 168-169) This had an influence on Shinji and Hatsue because after the mother read her daughter’s letter, she went to Hatsue’s house. Acouple of her friends joined her in her protest. They talked to Hatsue’s father and he agreed that the two children should be together. This act had an influence on the main characters because if Chiyoko’s mother had not spoken to Hatsue’s father because of her daughter’s note, Shinji and Hatsue probably would have been together.

When Shinji first saw Hatsue, he stared at her in amazement. “The boy purposely passed directly in front of the girl. In the same way that children stare at a strange object, he stopped and looked her full in the face.” (p. 8, paragraph 2) With Romeo and Juliet, there was a similar reaction. When they saw each other, at the mask party, they wanted to be together. These two relationships sharpened fast.

Romeo And Juliet Vs. The Sound Of Waves. (2016, Jul 10). Retrieved from https://studymoose.com/romeo-and-juliet-vs-the-sound-of-waves-essay 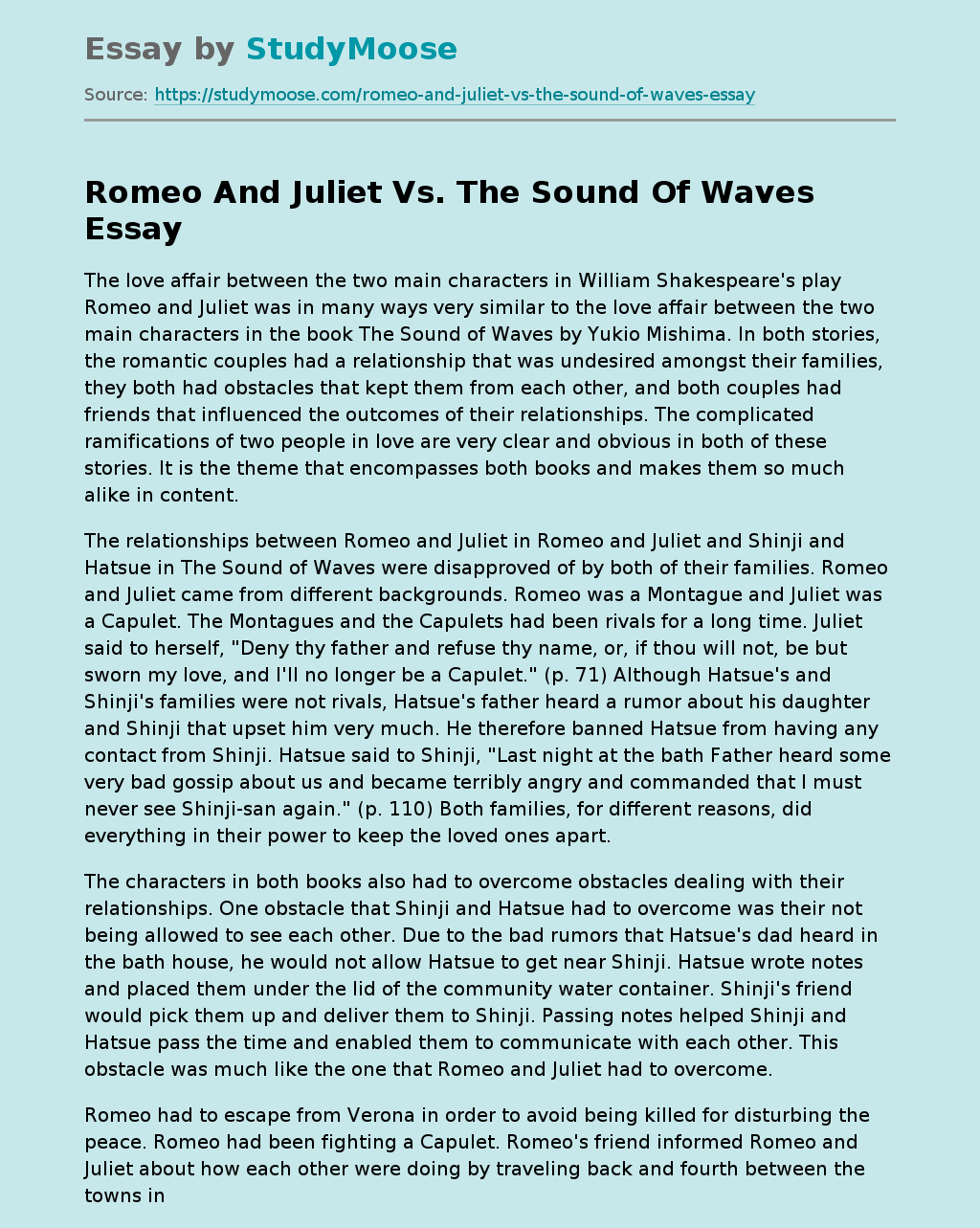