Role and evolution of the hero in literature

” If Hero means sincere man, why may not everyone of us be a Hero?” (Carlyle, qtd. in Hoyt’ s New Cyclopedia of Practical Quotations). This statement makes heroism seem simple, but is being sincere enough to make you a hero? In modern society, the answer is likely to be yes, but in literature, it can be controversial. A hero in literature is generally portrayed as a man of action rather than thought. He exceeds ordinary men in skill, strength, and courage and his usual occupations are war and dangerous adventures.

Don't use plagiarized sources. Get your custom essay on
“ Role and evolution of the hero in literature ”
Get custom paper
NEW! smart matching with writer

Surrounded by noble peers, he is ruled by honor and pride and is ruthless towards his enemies. His responses are generally predictable and his inability to decline a challenge can sometimes get him into trouble. The appearance of heroes in literature marks a revolution in thought that occurred when writers and their audiences turned their attention away from immortal gods to mortal men.(“Hero”, Encyclopedia Britanica). Heroes were the first human beings in literature and where able to spark a general interest in the audience.

They risked their lives for valiant causes and created a moment’ s glory that lived on longer after they were gone.

Although this was a great change, these heroes were still very much like the gods that preceded them and in turn created a classic picture of heroism in all of our minds. Nearly every literary work has a hero, or a main character that we think of as being a hero. Modern literature has come a long way since the first hero and the standards of heroism have been severely altered.

Nowadays, literature potrayes a hero as being : the classic hero who performs great feats of strength and is always rewarded ; the humble hero who performs tasks simply because that is the right thing to do and is often not only unappreciated, but even criticized for it ; the clever hero is able to outsmart his enemies without even laying a finger on them ; the corrupted hero is usually an intellectual who abuses his powers and turns himself from hero to villain ; and finally there is the anti-hero who performs no real heroic tasks and is often quite cowardly, yet being the main character, we consider him a hero. The classic hero is a typical knight in shining armor that effortlessly saves the helpless victim, usually being a beautiful maiden.

All of us are very familiar with this typical plot. The story of ” The Three Golden Apples” is a story of a typical hero called Hercules, who searches for the garden of the Hesperides were a tree with golden apples grows (Hawthorn). Of course the task is not an easy one because the tree is guarded by a dragon with a hundred heads. During the course of the story, Hercules meets beautiful maidens that have heard of his legendary deeds, and being the hero that he is, he tells them about all his accomplishments making the deeds seem effortless. During his search for the garden, Hercules is able to defeat a great giant, slay a king that imprisons him, and tricks the great giant Atlas who holds up the sky. Through out the story Hercules is portrayed as a handsome, brave, and incredibly strong man who is well known for his feats. Yet, he also possesses the foolish pride most classic heroes have from always being put on a pedestal. This is an average young hero ruled actions not by thoughts. Another good example of the classic hero is a character called Wesley in the movie The Princess Bride (Rob Reiner).

Like Hercules, Wesley is extremely handsome and brave. Although not born into the role of a hero, Wesley quickly develops this skill. He does not posses unhuman like strength, but is an excellent swords men. He sweeps Buttercup of her feet and defends the helpless maiden while they travel through the dangerous fire swamp. He also performs many other heroic tasks such as defeating the giant. Perhaps the only thing greater than his deeds is his will power to succeed, and in the end, like all other heroes, he does. Again we see the way literature potrayes the classic hero. He is shown to be brave, handsome, strong, and fearless in the face of danger. He is a strong, proud, honored hero. However, we also come in contact with this heroes direct counterpart whose actions appeal to our emotions, rather than our sense of adventure. This is the humble hero. Unlike the classic hero, he is not extremely strong, and not necessarily handsome. His beliefs are not expressed through some miraculous feats of strength, but rather through his ability to do the right thing. His actions often go unnoticed and are even sometimes criticized like in Harper Lee’s book, To Kill A Mockingbird. When Atticus Finch agrees to defend a black man in court the community looks upon him as a “Niger lover.”

Even before he accepts the case, Atticus knows people will disapprove, but he is a honest man who stands up for what he believes in. His noble action is considered foolish and disgraceful and brings him no rewards whatsoever, but to Atticus, justice and the gratitude of a black family are more important than the opinion of people who prove to be ” white trash.” Atticus shows a different kind of bravery. He is heroic enough to do the right thing. The third type of hero we encounter in literature is the clever hero who uses his mind instead of his muscles to outsmart his enemies. We encounter this type of hero in Howard Pyle’ s book, The Merry Adventures of Robin Hood. Robin Hood is portrayed as a fun loving character. He is not one to be considered a coward and is a very proud sort of fellow. He attacks his enemy, the Sheriff of Nottingham by making him the laughing stock of the town. He never does any harm to anything other than the Sheriffs ego. In the story “The Shooting Match in Nottingham Town”, Robin cleverly disguises himself as a beggar and takes the prize from right under the Sheriff’ s nose.

He is able to cleverly outsmart the Sheriff without ever putting himself in any real danger. Robin Hood is truly cunning in his actions and is the cleverest of heroes. All of these heroes are very much liked by the reader, but unfortunately there is another less inviting look at heroism, the corrupted hero. The corrupted hero abuses his power quickly turning himself from hero to villain as Napoleon does this in George Orwell’ s Animal Farm. At the beginning of the book, Napoleon and Snowball, the two pigs are great heroes who use their superior mental abilities to drive Mr.Jones off the farm. Both pigs posses an advantage over the other animals because they can read and write, and this is where the problems begin. Snowball, however, is driven off the farm before he has a chance to use this skill for his own benefit. The “disappearence” of Snowball places Napoleon in a position of absolute power which quickly leads to the corruption of Animal Farm. The unsuspecting animals have faith in a leader who turns black into white and vise versa with the help of a pig called Squealer (propaganda).

Although he is still a hero in their eyes he has become a villain to the reader and is the biggest threat to the animals. He is no longer the hero, he is now the enemy. There is a last and final way that literature portrays a hero. It takes a main character and makes him seem like a hero simply because he is not a villain. A good example is William Shakespeare’ s famous play Romeo and Juliet. In this play, Romeo does nothing that we would consider heroic. He doesn’ t exhibit any great feats of strength or make any rightful decisions. In fact, most of his decisions are foolish, rash, and not thought out. He actually acts cowardly when he threatens to commit suicide when Juliet is still alive. Why then, do we consider him a hero? Perhaps it is the simple fact that we feel sorry for the two young lovers.

They are kept apart by their feuding families and denied the only thing they want, love. This makes their parents appear evil to some extent, and in turn makes heroes out of Romeo and Juliet. That is how an anti-hero becomes a hero in our minds. The five different types of heroes that I have discussed have little in common with each other, which shows that there is no clear definition of hero. A hero does not necessarily have to perform any great tasks. Sometimes being compassionate is enough to make him a hero. He may be a classic hero, with more strength than intellect, or a clever and sneaky hero who always has tricks up his sleeve.

Whatever the case may be, we must choose our heroes wisely, because there is a thin line between heroism and corruption. As you can see, a hero is only what we make him out to be. He is an image of our society’ s strengths and weaknesses. Heroes have been a part of literature since the time of ancient Greece and have changed extremely over the centuries. They reflect the changes in our society and the evolution of literature. The hero is a classic part of literature, there is not a story, that lacks a hero.

Role and evolution of the hero in literature. (2016, Jun 28). Retrieved from https://studymoose.com/role-and-evolution-of-the-hero-in-literature-essay 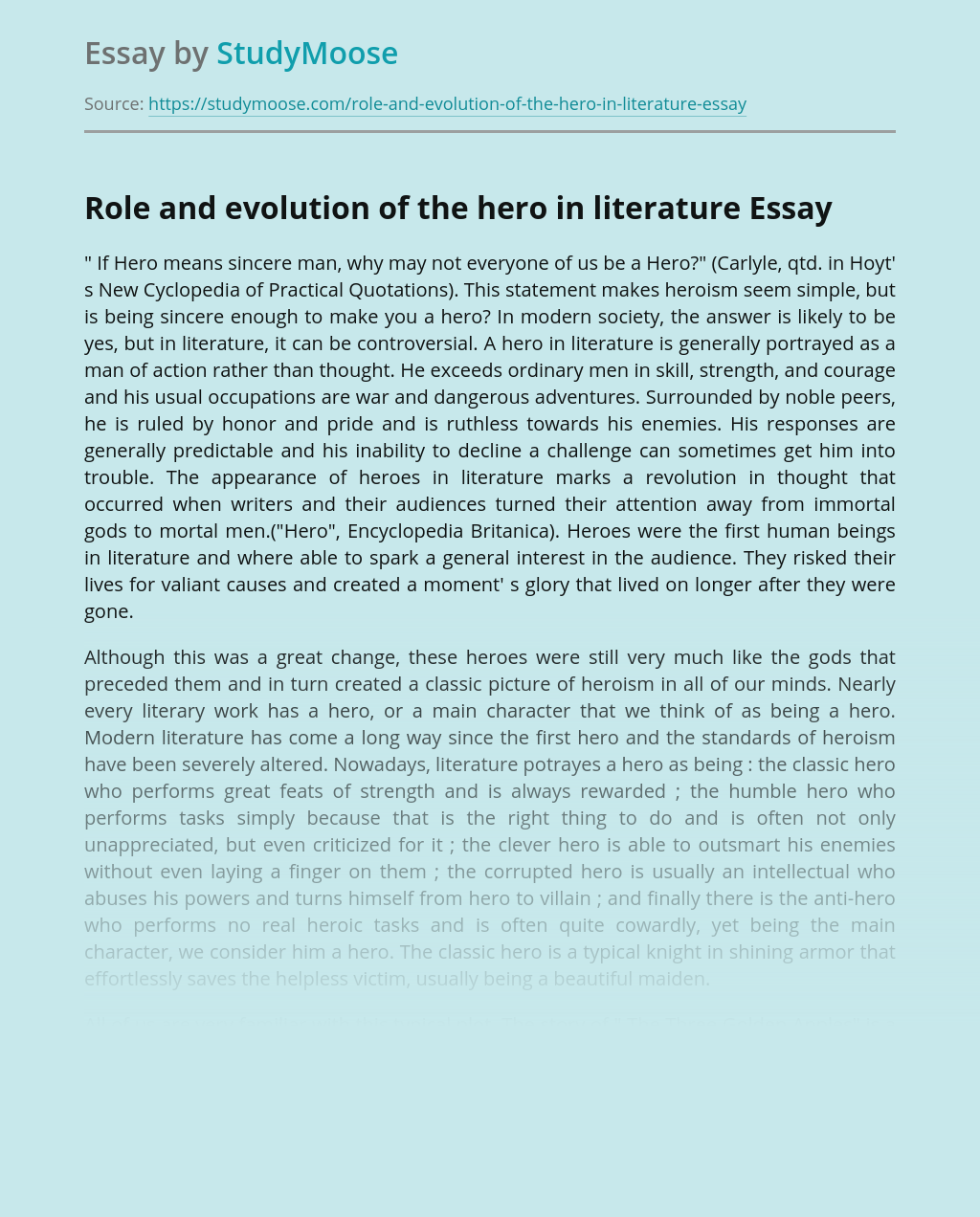