Puritanism (17th century) – a style of writing that adhered to five basic tenets of religious life: original sin, limited atonement, irresistible grace, perseverance of the saints, and predestination. Puritans believed that God divinely controls the universe and all humans, regardless of social or economic status, are equal in God’s sight. Central to Puritan success is the extreme self-determinism that still contributes to American idealism.

Don't use plagiarized sources.
Get Your Custom Essay on American Literary Movements Summary Just from $13,9/Page

Classicism or Neoclassical Age (18th Century) a style of writing that valued reason and rational thought as well as traditional, formal form; it was an imitation of the ancient Greek and Roman art and literature; also referred to as the Age of Reason or the Enlightenment. Important writers of this period: Benjamin Franklin, Thomas Jefferson, and Thomas Paine.

Romanticism (early 19th Century) a reaction to Classicism; new form of fictional literature that emphasized feeling over thinking and contained the following characteristics: focus on self, fascination with the supernatural or gothic, love of nature, yearning for the exotic or picturesque, deep-rooted idealism, and nationalism or love of country.

Transcendentalism (19th Century) a movement based in New England that promoted the belief that intuition and the individual conscience “transcend” experience and are better guides to the truth than the senses and logical reason are. Transcendentalists combined the “best” of Classicism and Romanticism; they believed in the value of classic tradition and still valued nature and the individual. They believed in the “Over-Soul,” a divinity who was present in all things. Important writers of this period: Henry David Thoreau, Ralph Waldo Emerson, Oliver Wendell Holmes, and Henry Wadsworth Longfellow.

*Note: Some historians refer to the years 1850-1855 as the American Renaissance because so many writers of great importance recorded the events of this time in America. Civil War Literature (1861-1865) mainly nonfiction accounts and diaries; poetry was still fairly popular. Important writers of this period: Abraham Lincoln, John Greenleaf Whittier Realism (mid to late 19th Century) a literary movement that sought to portray ordinary life as real people lived it and attempted to show characters and events in an objective, almost factual way.

It had its roots in this country in the experiences of war, on the frontier, and in the cities. Science played a part in Realism as well; a Realist had to be acutely observant, dealing honestly with his or her characters. Important writers of this period: Willa Cather, Kate Chopin, Emily Dickinson, Bret Harte, William Dean Howells, and Stephen Crane. Naturalism (late 19th Century) influenced by the French novelist Emile Zola, Naturalism sought to examine people and society objectively and draw conclusions from what is observed, much like a scientist. Naturalist writers viewed reality as an inescapable working out of natural forces.

They believed ones destiny is decided by heredity and environment, physical drives, and economic circumstances. Naturalists believed that people had no control over events and tended to be pessimistic. A recurring theme in Naturalism is man is at the mercy of the brutal forces of nature. Important writers of this period: Stephen Crane, Jack London, Frank Norris, and Theodore Dreiser. Regionalism (late 19th to early 20th Century) writing attempts to describe the LOCAL COLOR of a region by presenting its distinct culture (dialect, customs, beliefs, history…).

Local color is the use of characters and details that are unique to a particular geographic area. Local color can be created by the use of dialect and by descriptions of customs, clothing, manners, attitudes, scenery, and landscape. Regionalism goes beyond the mere local color writing and adds a sociological or anthropological treatment of the culture of a region. Important writers of this period: Bret Harte, Mark Twain, Sarah Orne Jewett, Eudora Welty,and Willa Cather.

Modernism (Early to mid 20th century) writing that discloses a rejection of tradition and a hostile attitude toward the immediate past. Modernism came about as an international movement dominating the arts of Western culture from shortly after the turn of the century until around 1950. Important writers of this period: William Faulkner, F. Scott Fitzgerald, Ernest Hemingway, John Steinbeck. Post-Modernism (end of WWII to present) writing that has prompted a heightened interest in the various genres of criticism: feminist criticism, deconstruction, post-structuralism. 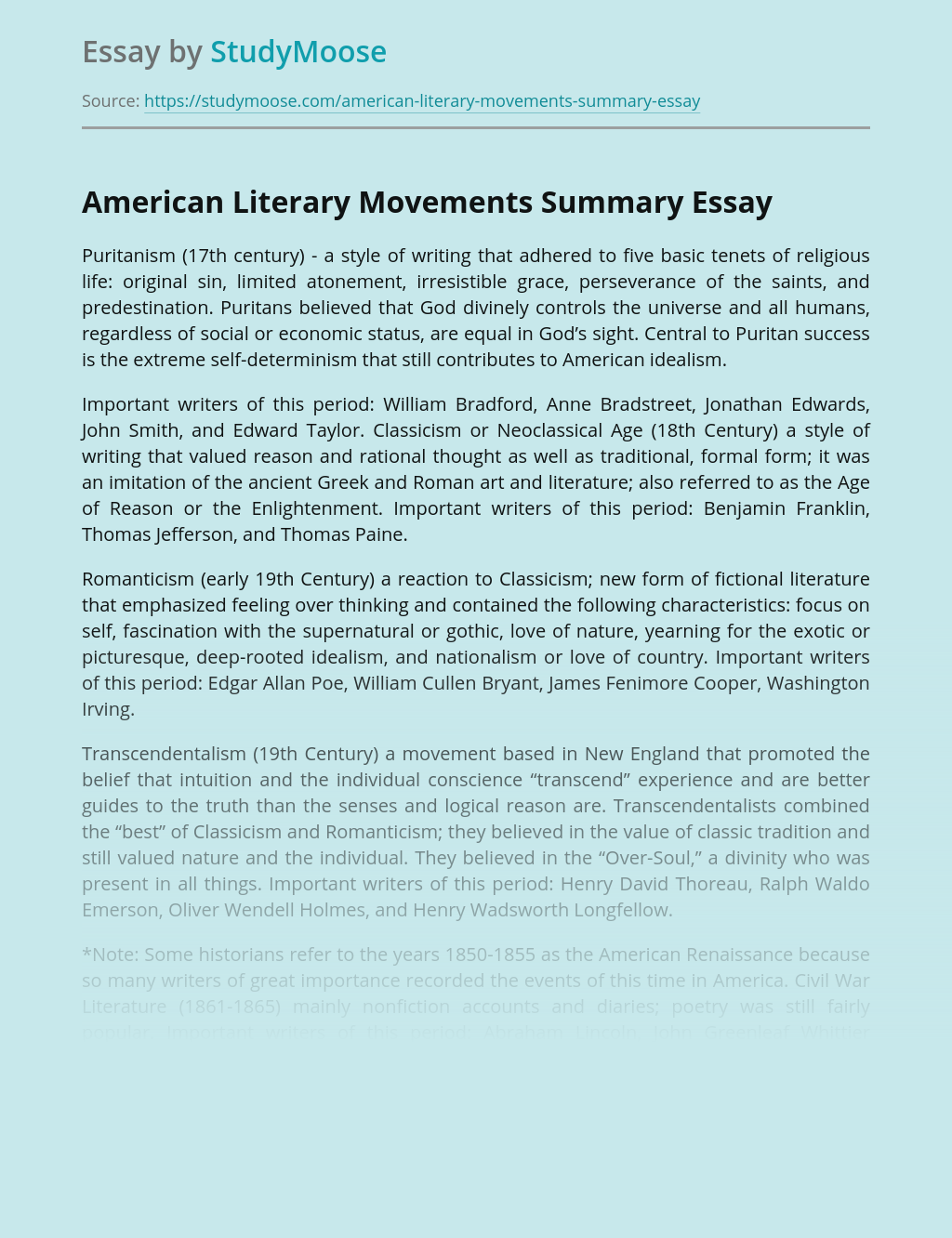 Rate this post After reading “Malala Yousafzai’s speech about education, you should realize that everyone deserves to have an education. Everyone also deserves to voice their own opinions. While Yousafzai presents a valid argument discussing the need for “education in Pakistan” in which she aims to get peace, equality and education for every child. She...

Letter In Your Local Newspaper

Rate this post Write a letter which you hope to be published in your local newspaper. Inform readers what leisure facilities are available for young people and families in your area and explain how you think they can be improved. (16 marks) Dear Editor, You will be aware what an awful, boring place Halstead is....

Get Essay
Truth in Picasso's the Old Guitarist

Rate this post Martin Heidegger regards language to be the ultimate reality, and holds poetry to be the highest and most authentic form. Language became a quasi-divinity, the ultimate reality or medium which explains the world to us. Heidegger takes this idea further to say all art is essentially poetry. He furthermore states the work...

My Hobby Cooking a Birthday Cake

Rate this post Making a cake can be really fun especially a birthday cake. It can also be really simple and easy. But many of us may have tried and have failed not knowing what kind of ingredients we may need. I thought it was hard to make a cake at first but as I...

Rate this post A strong, intelligent man, Martin Luther King Jr., once said, “Our lives begin to end the day we become silent about things that matter,” and what mattered 50 years ago, was finding a sense of equality in the world. That each person could feel as if they were all equal to one...