History of West African dance, different type of dance and the drum

West African dance reached the Americas during the slave trade. Slaves were often prohibited from dancing, but African-based movements found their way into European dance styles, quickly evolving into popular American dances. The influence of African dance can be seen in early American dances, such as the Ring Shout and the Cakewalk, and later dances such as the Jitterbug, and the Charleston.

The influence is still visible in more contemporary styles of dance including hip-hop and jazz. West Africa is made up of 16 different countries containing multiple tribes and cultures, each with a different set of dance.

Don't use plagiarized sources. Get your custom essay on
“ History of West African dance, different type of dance and the drum ”
Get custom paper
NEW! smart matching with writer

Many dances are only known within the particular tribe they come from, but most share, the common element of drumming as the dancing music. Dancing in West Africa is a form of social interaction, where the whole tribe comes together. Different dances are also performed on different occasions, such as initiations, funerals and marriages. Adzogbo is an ancient ritual war dance originating in Benin.

Dancers usually wear red and black when performing the Adzogbo dance. The Adzogbu is a dance of the Ewe people of Ghana and incorporates movements used in battle (throwing a spear, for example) into the dance. As with most West African dances, the Adzogbu is normally performed by a circle of dancers, and this particular dance has a very complex drum rhythm. According to the California Institute of the Arts, Bawa is a traditional harvest dance of the Dagarthi people from Lobi, northern Ghana. The dance is performed as a ritual thanksgiving to the gods and ancestors, but also as an appeal for the success of next year’s crops.

The Bawa incorporates many of the movements often seen in fieldwork, such as threshing and planting, in a stylized manner. The Bawa dance is performed by members of the community of all ages and sexes.

The Mouwa dance is performed by the Minianka, Senufo and Bambara people of Mali. According to Kentucky Educational Television, the Mouwa is performed by those villagers whose are responsible for weeding the fields. The dance is a form of motivation that anyone initiates when the pace of work has slowed. It is also performed before beginning work, and during weeding the dance’s song is usually sung to help the work go faster. The Gomba is a funeral dance of the Bambara people of Mali. The dance is taught over a period of seven years to members of the tribe, and the teaching is done in secrecy in the forest.

The Gomba is not a dance performed in frivolity; rather it is undertaken in the utmost solemnity, to mark the seriousness of the occasion.  Drums, played with hands and sticks, are a vital component of West African dance. The drum is the “language” that the dancer interprets. The drum patterns signify a dancer when to start or stop a certain move, and what moves to use. The dancer also challenges and directs the drummer through his or her moves.

The drummer translates the dancers moves into rhythms. The drummer and dancer are interconnected. The largest of the three drums is dundumba, which has the deepest voice and typically plays phrases that accentuate the rhythm’s foundation and interact melodically with the sangban. The sangban, is the middle-size drum, is tuned to mid-frequency that matches the tone of the djembe, and often plays a lead role in creating the core identity of the rhythm, with specific calls and variations that communicate to the dancers. The smallest of the family is kenkeni, which has the highest voice best suited to keep the pulse, or downbeat, of the rhythm. Each distinct part played by dundumba, sangan, or kenkeni typically has a bell pattern related to the drum pattern.

History of West African dance, different type of dance and the drum. (2016, Apr 29). Retrieved from https://studymoose.com/history-of-west-african-dance-different-type-of-dance-and-the-drum-essay 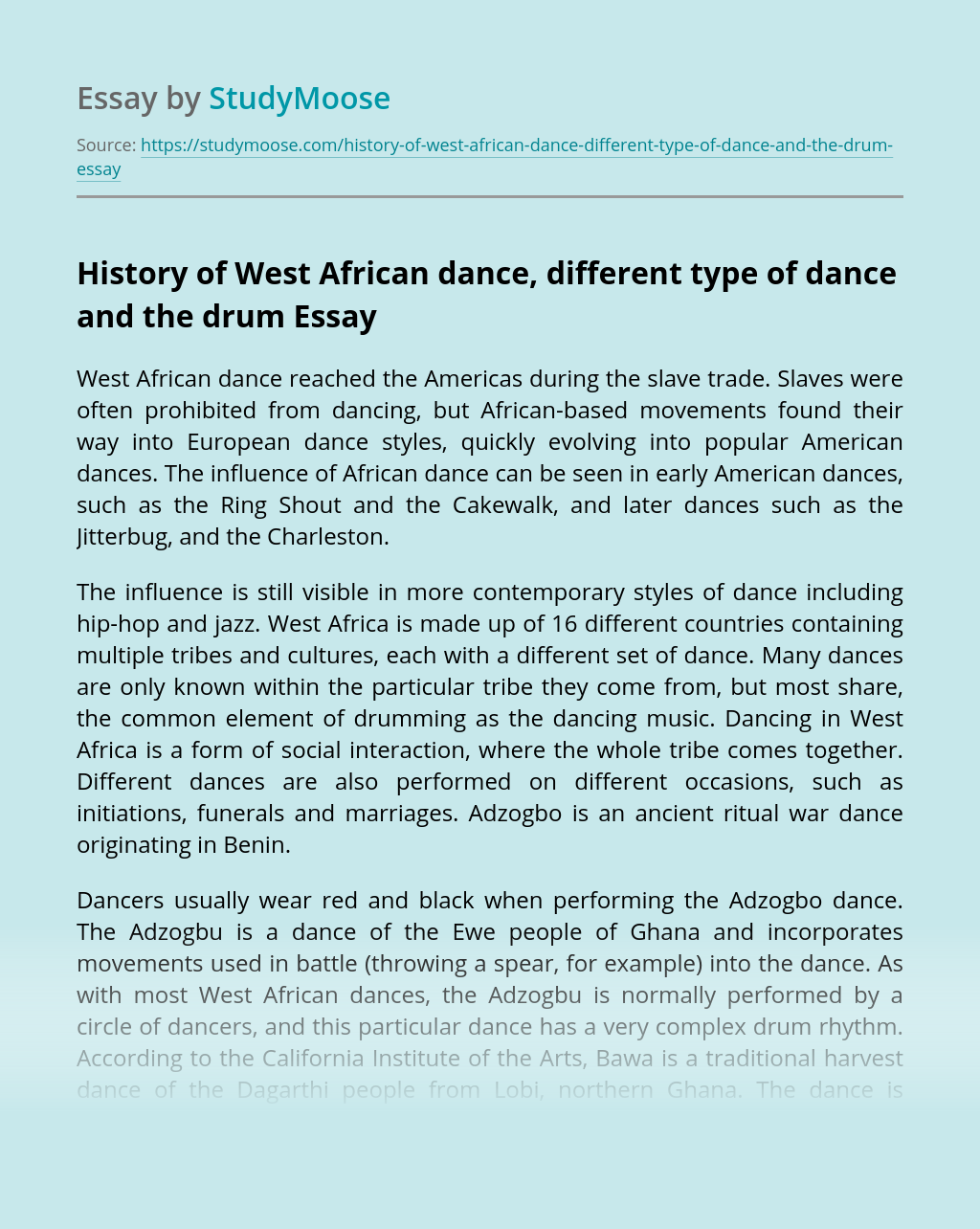