Dancing is an art. It is a creative way for people to express their feelings through movements and rhythm. From the 19th century to the 21st, dancing has evolved from the traditional modern dancing featuring the waltz, to urban dancing including all pop, hip-hop, and freestyle dancing. During the twentieth century in America, dance became the main type of entertainment. Dance has been used to help keep many Americans gleeful during the country’s crises, economically and technologically. To express their reactions to these changes, Americans danced.

Don't use plagiarized sources.
Get Your Custom Essay on Evolution of Dance Just from $13,9/Page

As the society changed during the decades, so did the type of dance, creating new forms of entertainment that are now a part of our American history.

18th & 19th Century “The Waltz” Intro: In the eighteenth and nineteenth centuries, dance became a gathering for purposeful social activity; elaborating private parties offered a means for a gentleman to seek his wife and allowed friends and family to share the new trends in music and dance.

In a political sphere, a ball provided a setting for politicians to exhibit their wealth and standing by their knowledge of the most fashionable dances.

Dance/Historical description: What became a classic modern ballroom dance was known as, the Waltz. It is a simple step, but it does require you to be on the balls of your feet most of the time, which can be quite hard on the knees. The dance is done to a waltz beat, which is a, one-two-three step. The dance style created during these early years created changes that were referred to as “social dancing.

Clothing: Concerning the colors of dress, ladies were advised to choose colors that would best complement their features. Fair blondes were best suited to soft and delicate colors while brunettes draped themselves in rich and vibrant colors. Gentleman’s clothing changed little over time. Simplicity was key- a black dress coat, black breeches or trousers, and black or white vest made up the gentleman’s ballroom, “uniform.” As well as the ladies, men were encouraged to keep all jewelry at a minimum and dress accordingly to their features.

20th Century Swing – 1930s to 50s Intro: Influenced by jazz, the swing originated within the African-American culture of the time and soon spread throughout the US as popular music began to follow the direction of jazz. Swing was one of the great unions that tied everyone together at a time of segregation in the US. It had also worked in the same way during the war period, as dances like the Jitterbug and Jive were taught to the European masses by the U.S. troops stationed in Europe.

Historical Description: The African American community discovered the swing, dancing to the music of jazz, and creating popular moves such as the Charleston and the Lindy Hop. The Lindy Hop was big within the dance and was starting to slowly spread across the United States from its origin at the Savoy Ballroom in Harlem New York. Rock and Roll – 1950s to 60s

Intro: After the Swing Era and World War II, American social dancing cooled down in the late 1940s. The shift from dance bands to concerts in nightclubs was due to several factors. Musician union fees made big bands unaffordable, the cool down of jazz, and a generation of post-war veterans with the new priority of settling down and raising a family. But the youngsters still wanted to dance. This was the shift.

Description: Throughout the US, the young generation took the lead in the, development of new dances in the 1950s. Rock dances were generally adapted from dance styles mentioned earlier; the lindy hop and the jitterbug served as a basis for many of the fast dances. While dancing was developing, technology was also changing. With the arrival of the Jukebox in 1951, which brought popular music to the bars and clubs that didn’t have live bands, made rock and roll become popular, as one song would spread at a rapid pace throughout many followers.

The Spread: Some teens sought out African American sources for new steps and styles. The mass communication via television also meant that these dance steps could spread themselves with more speed thanks to their advertising within programming. This also allowed people who opposed the dance such as churchmen, to preach their believes on their negative outcomes for its rebellious and provocative culture. One famous example we probably all know is The Twist, which inspired a raft of new dances amongst young people as well as dances known as the Funky Chicken and the Monkey.

DISCO – 1970s The disco was an era that began in the mid-1970s, encouraging a whole generation to dance and party. It was a new dance style created in the West for entertainment and a wild new type of dance, that was considered exciting and fun. It became very popular in movies and nightclubs. John Travolta was the spotlight for starting this disco dance, from his role in the movie Saturday Night Fever.

The original disco subculture was a fusion of the gay urban party scene, partnered dancing which was kept alive by Latin’s, and African American music. Many other populations of Americans were also attracted to the Discos. This particular dance was focused on groovy soft rock and upbeat electronic music.

Although disco lasted only a decade, it initiated several traditions that are still with us today, most noticeably in dance and dance music. An example, while rock music in the 1970s was becoming a sit-down experience, with the stars up on the stage lights and the audience listening below, the disco reversed this by putting the audience in the spotlight and demonstrating their dance skills. Another example would be the interest a person would have over a song by appealing more to the rhythm and beat rather than the lyrics. Today we known of them as trance, electro, and house music along with the other electronic beats that continue the disco diva tradition.

Urban Dance,- 1980s – 2000s Hip-Hop culture originated in New York amongst young Hispanic and African American people. The style encompasses the movements of break-dancing and body popping. The 1980’s saw the emergence of a new style of hip hop into rap videos, distinguished from original break dancing styles by its concentration on footwork as opposed to acrobatics. As “pop” and hip-hop music became more influential, so did the dancing styles that grew up with them, and so dances such as The Moonwalk, the worm, Wop, Cabbage-Patch, and Running-Man burst into the scene.

By the 1990s, urban dancing was officially created, which is a type of street dance that became very popular in America. Several bands used this dance style along with hip hop in their choreography.

People wanted to create their own style and be known as individuals. They were coming up with their own hidden dance choreography, creating steps, styles, and fashion that several people wanted to learn which was known as freestyle.

Conclusion For once, America was able to spread their new dance culture with the world. In the twentieth century the American society, went through many changes. There appeared to be a crisis in almost every decade. People found ways to express their feelings about each crisis through dance which came from all over the world. The style of dance changed every time the society itself went through a change, whether it was because of war or simple social rules. When the new millennium occurred people brought with them not only the style from the 1990s, but one hundred years worth of dance, ready to pass on the styles to the generations to come. 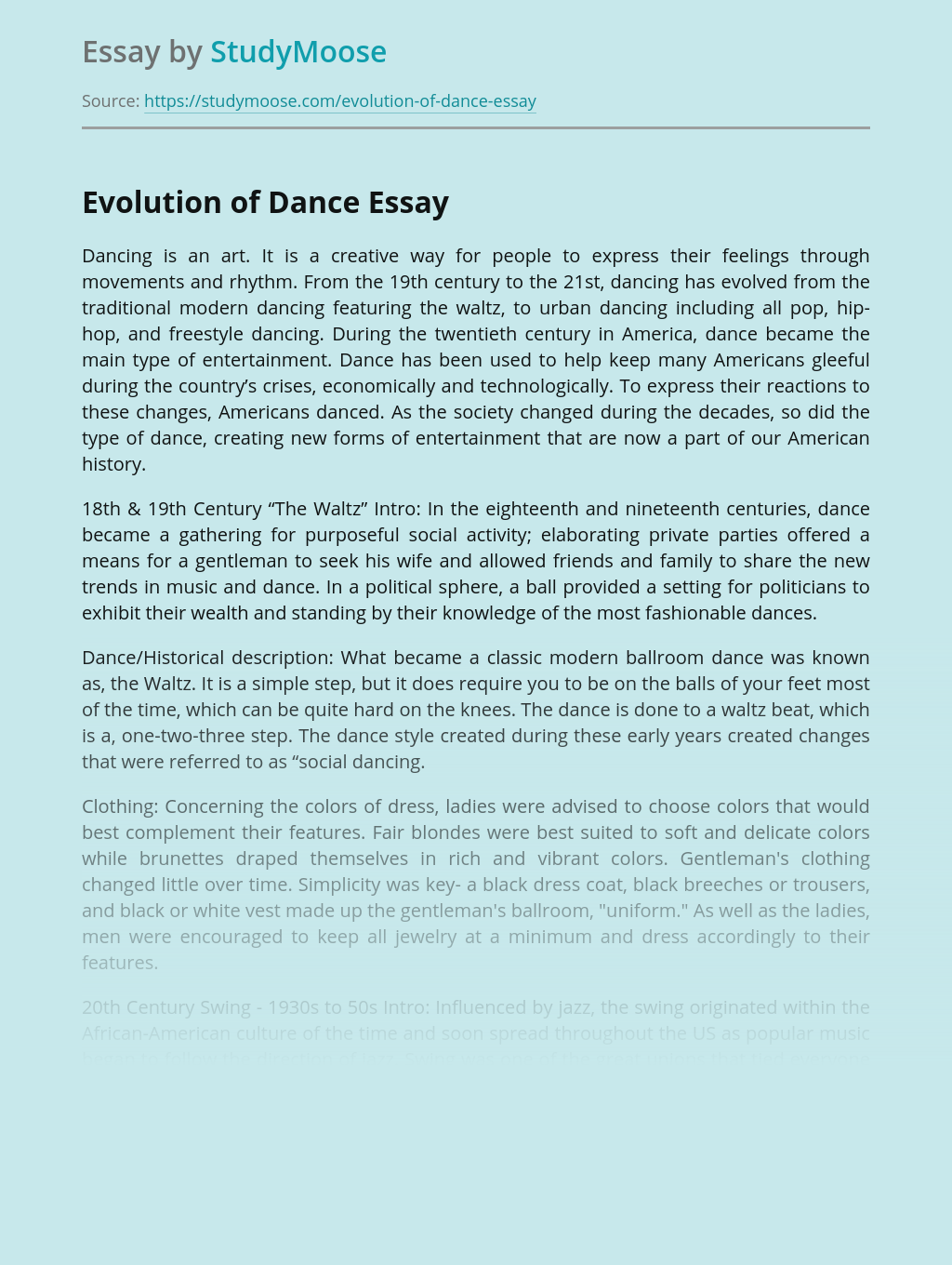 How have Nacho Duato’s background and training influenced his choreography of Jardi Tancat? Nacho Duato was born in Valencia Spain on the 8th January in 1957. His dream was always to study ballet but due to the lack of prestigious dance institutes in Spain, at the ripe age of only 16 he travelled to London...

Jackie Elliot is seen as a traditional man with anti feminist views. he sees that boys should be tough whilst girls should be more placid. Throughout the film Billy Elliot, the directer has created the character Jackie Elliot, a widowed father feeling the grief of the recent lose of his wife. This essay suggests that...

Get Essay
William Wordsworth Poem: "I Wandered Lonely As A Cloud"

Wordsworth begins his extended metaphor in the third line of the poem, with his speaker saying, “I saw a crowd, / a host, of golden daffodils” that were “fluttering and dancing in the breeze.” (line 6). The speaker is attributing to these daffodils human qualities: their forming a crowd, and their dancing. That the speaker...

Tinikling Tinikling is a pre-Spanish dance from Leyte that involves two people beating, tapping, and sliding bamboo poles on the ground and against each other in coordination with one or more dancers who step over and in between the poles in a dance. Maglalatik Maglalatik is an indigenous dance from Binan, Laguna in which the...

Electronic dance music (also known as EDM, dance music, club music, or simply dance) is a set of percussive electronic music genres produced primarily for dance-based entertainment environments, such as nightclubs. Dance music is generally produced for use by DJs and is most often presented in the context of a DJ mix.[1] So called “DJ...