How does Kane try to show that we are ultimately responsible for our own actions? Does he succeed?

In this essay, I will explain Robert Kane’s libertarian notion of free will as well as his idea of self-forming actions and how he uses it to show that we are the ultimate sources of our actions. I will outline his view that we are ultimately responsible for our actions because we are their ultimate sources. I will object to that idea using the problem of luck, try to defend Kane’s views against it by arguing that an agent can have control over undetermined actions, and respond to that attempt by questioning whether an agent.

Don't use plagiarized sources. Get your custom essay on
“ Robert Kane’s Libertarianism ”
Get custom paper
NEW! smart matching with writer

In order to lay the basis for explaining Kane’s claims regarding free will and ultimate responsibility, I will introduce determinism, incompatibilism, and libertarianism.

Free will, as defined by Kane, is “the power of agents to be the ultimate creators (or originators) and sustainers of their own ends and purposes.” (Kane 315). So, Kane’s understanding of free will is one of a source libertarian (a libertarian who holds that for one 1 to have free will, one has to be the ultimate source of one’s actions). According to Kane, an agent need not have the possibility to do otherwise when choosing to perform action A for action A to be a free action – it is enough for action A to be a free action if it is traceable to an antecedent undetermined action B for which the agent did have the option to do otherwise (Kane 318). He refers to actions like action B as self-forming actions (SFAs) (Kane 318). An agent X could, for example, decide to study on a Friday evening without having the ability to do otherwise but, as per Kane’s theory, that action would be free if it could be traced back to an SFA where X chose to study even though they wanted to both study and go to a party (and could choose to do either). What, according to Kane, allows us to trace our actions back to our SFAs is that they shape who we are as a person, which determines the choices we make in the future (Kane 318). So, when X chose to study, they formed a part of their character which determined that in the future they would choose to study in similar situations. Kane’s idea that we are the ultimate sources of our actions (because those of our actions that are determined can be traced back to antecedent undetermined actions for which we had the ability to choose between two different actions) becomes the foundation of his view that we are ultimately responsible for them.

In order to illustrate the problem of luck, I will return to the example from before. Imagine X who finds themselves in a situation where they want to both study and go to a party. After a long process of weighing the pros and cons of both options X decides to study. Suppose that, before X makes their choice, their decision is not determined by previous occurrences. However, it seems like, if X’s actions were truly undetermined, they might have weighed the same exact pros and cons the same exact way as they had weighed them and chose to go to the party. That poses the following question: was the choice X made a matter of luck? If it really is the case that X could have chosen to perform either action having gone through the same process of deliberation, it would appear that it was not X themselves who were the source of their action – in that case, X must have had no control over what their choice would be (Beebee 117). The apparent randomness of the choice seems to undermine the plausibility of SFAs as an idea supporting the claim that we are the ultimate sources of our actions – how could trace back our actions to SFAs we had no control over possibly show that we are the ultimate sources of our actions? Furthermore, how could doing so support Kane’s claim that we are ultimately responsible for our actions?

The way a proponent of Kane’s libertarianism might respond to the problem of luck is by attempting to show that we do in fact have control over SFAs even though they are undetermined by previous events. Suppose that, before performing an SFA, an agent might not only want to perform two different actions but also try to make the decision to perform both because of their conflicting desires. In that case, whichever action they choose to perform is nonetheless an action they were trying to choose to perform (Beebee 119). Imagine X who chooses between studying and going to a party. During their deliberation process they were not only tempted to both study and go to the party but they also simultaneously tried to make both the decision to study and to go to a party. Since X made the decision to study, they successfully made a decision they were trying to make. In that case, one might say they had control over the decision they made, that X really was the ultimate source of their decision and hence that they were ultimately responsible for it.

I believe this attempt to defend Kane’s theory to be unsuccessful. It seems to me that in order for a moment to be truly undetermined (which is required for SFAs to occur), the entity responsible for determining an agent’s non-SFAs would have to either temporarily cease to exist or temporarily lose the properties allowing it to have that deterministic power. If that is really the case, for Kane it would mean that one has to stop being exactly the person they are for the undetermined moments to occur (since he believes it is who we are as a person that determines our non-SFAs) (Kane 318). How could an agent be said to have control of their actions the way Kane describes they could if there is no certainty about whether the person they are when performing an SFA is the person they are otherwise? Since, in my opinion, if SFAs really were to occur in undetermined moments, it would not be certain whether the agent who performs the SFA is the same agent they are at other times, I believe Kane fails to show that we are the ultimate sources of our actions. 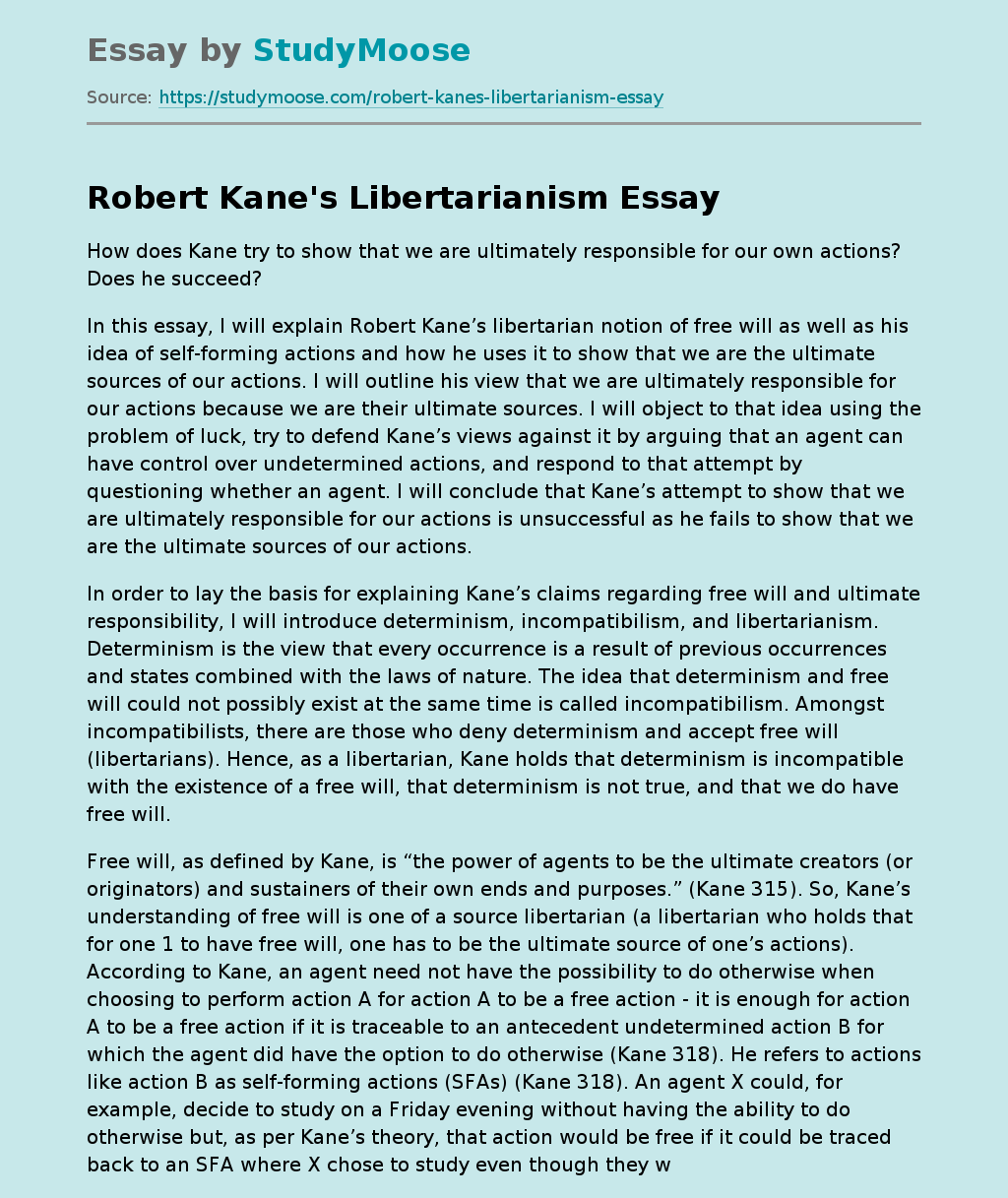