Richard Rodriguez- Aria: A Memoir of a Bilingual Childhood

“Aria,” an excerpt from the memoir “Hunger of a Bilingual Childhood,” accounts for the author, Richard Rodriguez’s, childhood experience with learning English as a second language. Throughout his essay he represents the power of the individual to defeat the language barrier and how he overcame this particular problem as a child. Being torn between conforming to the “public” language or staying true to his “private” language, he discusses themes of intimacy and language. Throughout his excerpt, he presents arguments against the idea of bilingual education and it’s negative effects on ESL students, like himself.

Don't use plagiarized sources. Get your custom essay on
“ Richard Rodriguez- Aria: A Memoir of a Bilingual Childhood ”
Get custom paper
NEW! smart matching with writer

Born in a Mexican immigrant family and moving to a city in California, Sacramento, Rodriguez had already known from the start that he’s “different” from the rest of the children in the area. He was hispanic. He felt the difference expressively at school and it was not just because of his physical appearance. The difference of is what isolated him the most. They differed socially.

He felt a disconnect between Spanish, the language he used at home which offered comfort, versus English, the language used in the public world which to him was foreign. Rodriguez felt the separation from his English-speaking classmates, as he struggled to master this “public” language and hopefully gain acceptance. Since its founding days, U.S. had always been a melting pot of diverse ethnicities. Welcoming newcomers while insisting they learn and embrace its civic culture.

It was suggested that those who come here in America should become Americans. Upon entering grade school, it was a massive culture shock for Rodriguez.

He was put in an ESL class expected to learn English, to speak English, and communicate in English, but of course in a “English as a Secondary language” setting. It was a challenging transition, however, with practice, Rodriguez began to slowly adopt the English language giving him and his family confidence and gaining a sense of identity among his peers. However, every triumph came at a price. Rodriguez had always considered Spanish an intimate language he used amongst his family. The more English he spoke meant the less spanish. Not long after, he felt that connection slowly and to him he associated that as a “departure” from his childhood.

In Greek, path means “emotions” and for Aristotle, pathos is an appeal to those states of mind that have an emotional component. Since it is a memoir, his emotions were vivid in every single page. He begins by presenting himself as a young hispanic boy, attending an American school for the the first with very little knowledge of English (Rodriguez 163). The reader’s instinct is to feel sympathy for the young boy drowned in unfamiliarity in his new environment, a new group of people, a new way of living, and a new language. He quoted, “I heard her sound it out: Rich-heard Road-ree-guess (Rodriguez 162)”. Readers can sympathize with relatable feelings of being young and vulnerable, when first being faced with the real world.

Also, he remembered being outnumbered in his school by people of different ethnic backgrounds. Again, readers’ natural instinct is to sympathize with anyone who might feel like the “underdog” or someone who feels excluded and different. And lastly, another big example was when Rodriguez notices his mother’s face disappearing from the school on his first day, he said, “Quickly, i turned to see my mother’s face dissolve in a watery blur behind the pebbled-glass door (Rodriguez 163). Again, the readers as humans are naturally inclined to sympathize with a child facing a new and potentially threatening experience without the help and guidance of it’s mother, therefore it is a terrifying experience. It is evident that Rodriguez felt many negative emotions being a minority in a foreign place, he felt fear, and under appreciated for who he was.

For Aristotle, the ethos of a speaker is persuasive when the speech demonstrates practical wisdom, moral virtue, and goodwill towards the audience. On his first day of school, Rodriguez commented that although he felt nervous on his first day of school, he knows that the other children also felt nervous as well, he observed his classmates being “uneasy…finding themselves apart from their families (Rodriguez 162)”. He therefore showed his sense of fairness and his lack of self-pity, which reflects on his humble character. Another example, is when Rodriguez carefully explains the goals of bilingual education as those goals are understood by it’s proponent. He states, “Bilingual schooling is a program popularized in the seventies, that decade when middle-class “ethnics” began to resist the process of assimilation— the American melting pot (Rodriguez 172).”

Once more, he present himself as fair minded and objective. Also, while he was expressing his opposition to bilingual language his used of the word “force” in “I hear them and am forced to say no… (Rodriguez 180)” implies that his point is not trivial. It is something he feels he need to voice to make other ESL students feel more comfortable. His phrasing suggests that he feels theta he has no other ethical choice but to say war he truly and sincerely believes. This proves that he is true and sincerely to what he believes and is honest and caring about the well being of other children who feels “different”.

Logos are explained as the “text of speech” by Aristotle. And lastly, Speaking as an intelligent and educated adult, Rodriguez introduces the topic of bilingual education. He shows that he knows when his idea was first proposed, by whom it was proposed, by whom it was first proposed to, and the reasons that led people to propose it (Rodriguez 172). His implication proves him to be well informed and trustworthy commentator. Next, Rodriguez reports more of his own family background, implying that his opposition to bilingual education will be rooted in very practical reasons with which he is quite familiar, he states “Bilingualists insists that a student should be reminded of his difference from others in mass society, of his heritage (Rodriguez 173)”. His opposition will not be irrational but will instead be the result of reasons he personally knows all too well.

The point Rodriguez is making in his essay through the use of rhetorical appeals is that growing up as an ESL learner was difficult, but it enabled him to establish a public identity in his English-Speaking community. He felt he had the right and obligation to learn English. Rodriguez does not agree with “Hispanic American activists” who support a bilingual education for ESL learners. He feels that instructing the children in Spanish rather than English might delay their own entrance in the public world of English-Speaking society and hurt them in a long run.

He strongly feels that school should be taught in standard english, the same way how other students are taught. Instead of trying to assimilate the difference in social culture, schools and educators should encourage students to embrace their roots, while trying to learn the English language. ESL Students should not feel the need to keep their primary language exclusive when in the adult-life having a second language is a great advantage. The positive aspects of the position of ESL learners should definitely be emphasized in a school setting.

Richard Rodriguez- Aria: A Memoir of a Bilingual Childhood. (2016, Mar 21). Retrieved from https://studymoose.com/richard-rodriguez-aria-a-memoir-of-a-bilingual-childhood-essay 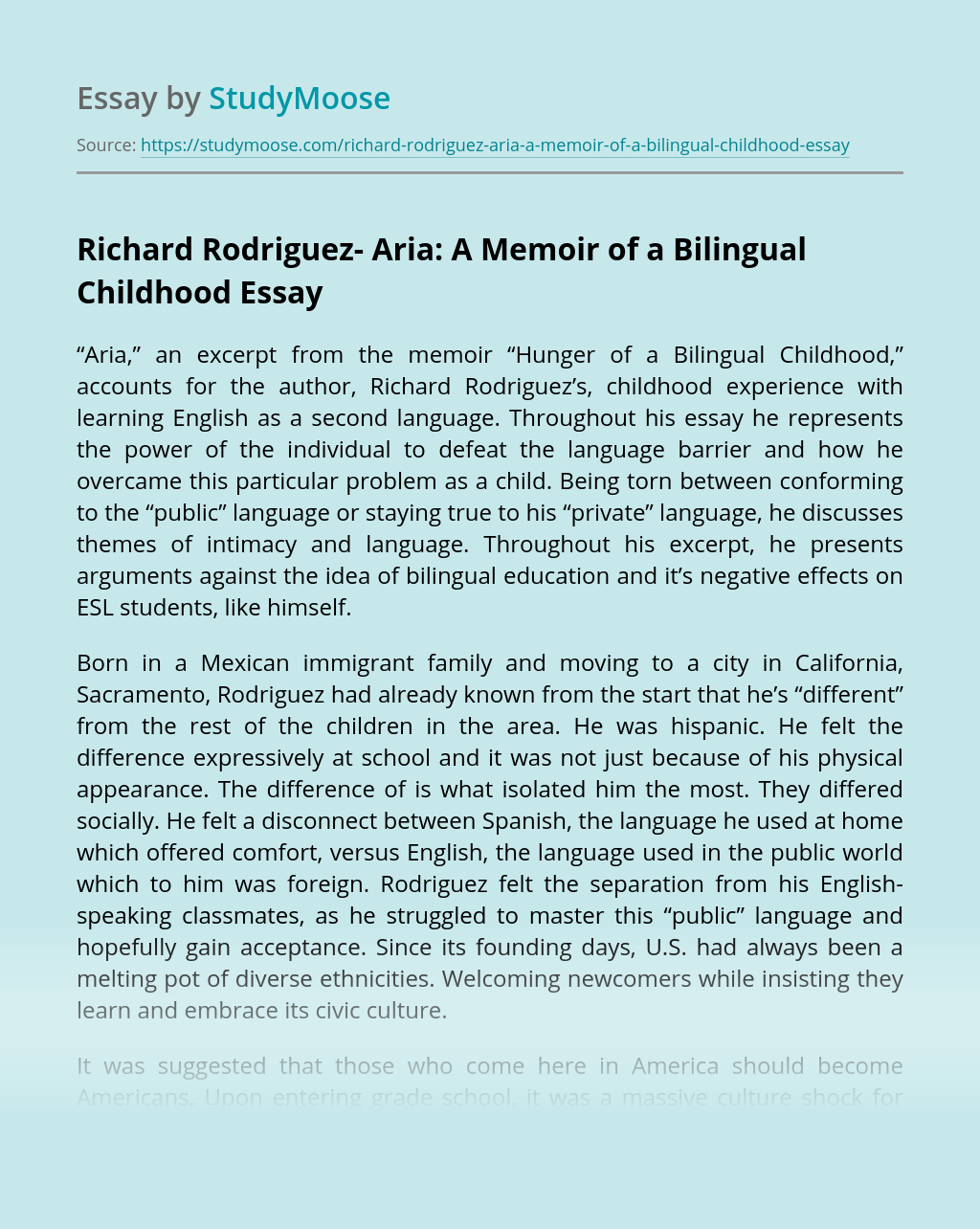