“Aria: A Memoir of a Bilingual Childhood” Review

A “Pocho” is an Americanized Mexican, or a Mexican who has lost their culture, often derogatory: many immigrants grow up in the United States are called this word and feel it to be true. “Aria: A Memoir of a Bilingual Childhood,” Richard Rodriguez argues the challenges of bilingual education and how his so-called ‘private’ language and ‘public’ language have affected not only his education, but his identity. In this piece of literature, Rodriguez writes for the immigrants and foreigners in America because many feel for his experiences and relate to his troubles.

Don't use plagiarized sources. Get your custom essay on
“ “Aria: A Memoir of a Bilingual Childhood” Review ”
Get custom paper
NEW! smart matching with writer

Through the uses pathos, ethos, flashbacks, and repetition Rodriguez effectively persuade people of dissimilar cultures and ethnicities to stand up for their cultural backgrounds no matter the situation.

Rodriguez begins his memoir on with Bilingual Childhood by acknowledging that moving to America has immensely affected his life with his transition from a Spanish speaker to an English speaker by expressing the depth of his guilt for losing himself in the process.

He appeals to the emotions of the audience by admitting his shame within’ himself because he lost his main language trying to fit in. Richard stated, “It is not possible for a child, any child, ever to use his family’s language in school. Not to understand this is to misunderstand the public uses of schooling and to trivialize the nature of intimate life” (Rodriguez 510). He believed that the in order to fit in he must trivialize his Spanish culture and strictly rely on becoming fluent in English.

He targets people’s emotions by using life-application as a strategy, for example, he explains the hardship of his family “no longer bonding” and feeling negative towards the change of having to speak English. The idea of hiding one’s cultural identity is awful for anyone with a proud family, no longer embracing one’s heritage can also affect people not only with family relationships, but in life.

After slowly becoming Americanized and feeling a sort of relief the author moves to an easy understanding of words where starting conversations were no longer an issue, in English. Rodriguez says, “…sounds as confused as the threads of blue and green oil in the puddle next to my shoes” (Rodriguez 512). At first, he was extremely confused as he strained to comprehend the English language using a simile to explain how he was lost by the sentence his father attempted to form. “They would repeat their questions in gentle, affectionate voices. But then I would answer in English. “…we want you to speak to us in Spanish…But I couldn’t do it. Then they would call me Pocho. Sometimes playfully, teasing, using the tender diminutive – mi pochito. Some not so playfully but mockingly, Pocho” (Rodriguez 519). Relatives and family friends began to call him a “Pocho” making him feel a sense of shame for leaving behind his family’s culture, although, it was his parents’ choice in agreeing to give up su proprio idioma (their own language). He uses flashbacks from being a youngin’ to reflect on how he was once upset to no longer feel the comfort in speaking his ‘private’ language in his own home to losing it, after all.

The shameful feeling he once felt for only knowing one Spanish juxtaposes his feeling of guilt towards the loss of his main language which to close the essay, Richard Rodriguez talks about his few memories with his grandmother before her passing concluding that he knew how to detect intimacy in a conversation, regardless of not being fluent in Spanish. “The mystery of intimate utterance remains. The communication of intimacy passes through the word and enlivens its sound, but it can be held by the word. It cannot be retained or ever quoted because it’s too fluid. It depends not on words but on persons” (Rodriguez 523). He starts to notice the differences between the change within’ himself, which was not verbally and having to do with language but social. He may have lost his fluency in Spanish, but his understanding remains. He still feels the warming feeling when being spoken to in Spanish or overhearing foreigners speak it. “…All words are capable of becoming sounds as we fill them with the ‘music’ of our life.” (Rodriguez 524). He stresses about the different ways that English and Spanish sound and how they make him feel. A part of what he tries to convey is that language can mean anything and everything depending on how you use it. Language is nothing but sound, they are given meaning through context and the way it is pronounced because sounds are universal.

Essentially, Rodrigues delivers an effective argument for his original audience through the usage of logic and passion. He accomplishes what is primarily stated in his thesis. He perfectly backed up all of his claims which were seemingly trustworthy due to his great use of rhetorical appeals and literary devices making his essay effective. He certainly makes an excellent point in persuading his audience, presenting a fair argument, providing more than one theme in the essay. In life, it is almost vital to always embrace experiences that come about, but one must certainly never forget where they came from.

“Aria: A Memoir of a Bilingual Childhood” Review. (2021, Aug 18). Retrieved from https://studymoose.com/aria-a-memoir-of-a-bilingual-childhood-review-essay 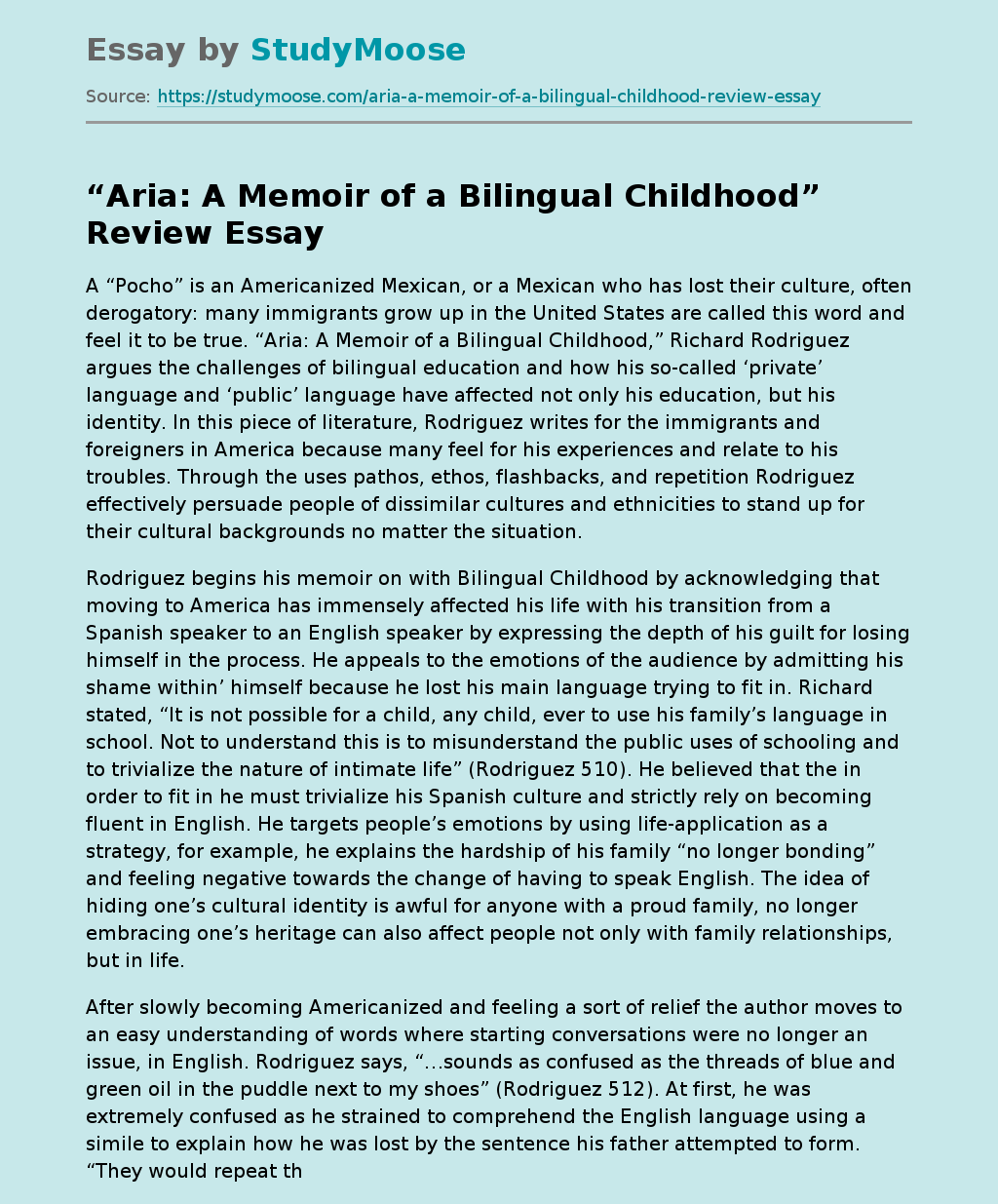