Majority of the people know the eminent line “ask not what your country can do for you- ask what you can do for your country” (Kennedy). That is indubitably one of the most well known segments of his speech, however, there are other parts that made it memorable. He knew he was not only speaking to America, but other countries as well. His speech keeps the audience both focused on what is important and understanding of the point he is trying to make.

Don't use plagiarized sources. Get your custom essay on
“ Rhetorical Analysis on JFK’s Inaugural Address ”
Get custom paper
NEW! smart matching with writer

He sought to send a message to the nation about the Cold War and his hope for peace along with his desire to inspire the nation. Throughout his speech, President John F. Kennedy uses parallelism, ellipsis, and antithesis to display to the audience that he was ready to be president and take on its challenges. Of the many rhetorical devices that President JFK used in his speech, parallelism was perhaps the most effective.

The repetition of “Let both sides” amplifies his wants for unity and peace.

His first use of “Let both sides” begins with talking about unity not division. As Kennedy repeats this for the second and third time, he includes how all countries should come together rather than to stand alone and take part in wars against each other. The world should succeed and prosper as one. President John F. Kennedy focuses on the idea of unity and peace throughout his speech. With those two factors, the world can undertake great things without the need for war, tension, or other harmful actions towards opposing countries.

In the beginning of his speech Kennedy is willing to “pay any price, bear any burden, meet any hardships, support any friend, oppose any foe”. This shows his willingness to fight for what he wants for the country: liberty, peace, unity. There are numerous forms of parallelism in JFK’s speech; however, there are few which have become infamous and recognizable immediately.

Kennedy’s speech is short and to the point, making it very effective. JFK had moral intentions and wanted to help his nation along with the rest of the world. This is clear by his use of ellipsis when he says “This much we pledge- and more” (Kennedy). By saying “and more”, President Kennedy expects the people to accomplish and partake in more than the ideas that were listed. Not listing numerous ideas made his point clear and effective. It allows his audience to think about what else can be done for the country. Kennedy makes it clear that he intends to do anything and everything in his power for peace and liberty. He is telling the audience that what he said was not all that can be done, and that they were just examples of what should be done to reach that goal.

Kennedy uses ellipsis when he mentions “a celebration of freedom- symbolizing an end, as well as a beginning- signifying renewal, as well as change” (Kennedy). By strengthening his statement on the celebration of freedom, it confirms that with this freedom comes a new beginning alongside change. President Kennedy states this in the first sentence of his speech, which fortifies the idea of freedom and what needs to be done in order to attain it. By the use of antithesis, JFK makes his speech memorable by inverting his sentences. Kennedy goes on to say that America should “never negotiate out of fear. But let us ever fear to negotiate” (Kennedy). This statement outlines the entire purpose of President Kennedy’s speech-spreading peace and assuring the success and survival of liberty. Kennedy’s most famous line “ask not what your country can do for you- ask what you can do for your country” (Kennedy) creates an idea that is still used today. The idea it generates is that citizens should be giving more to the country than they expect to receive in return. 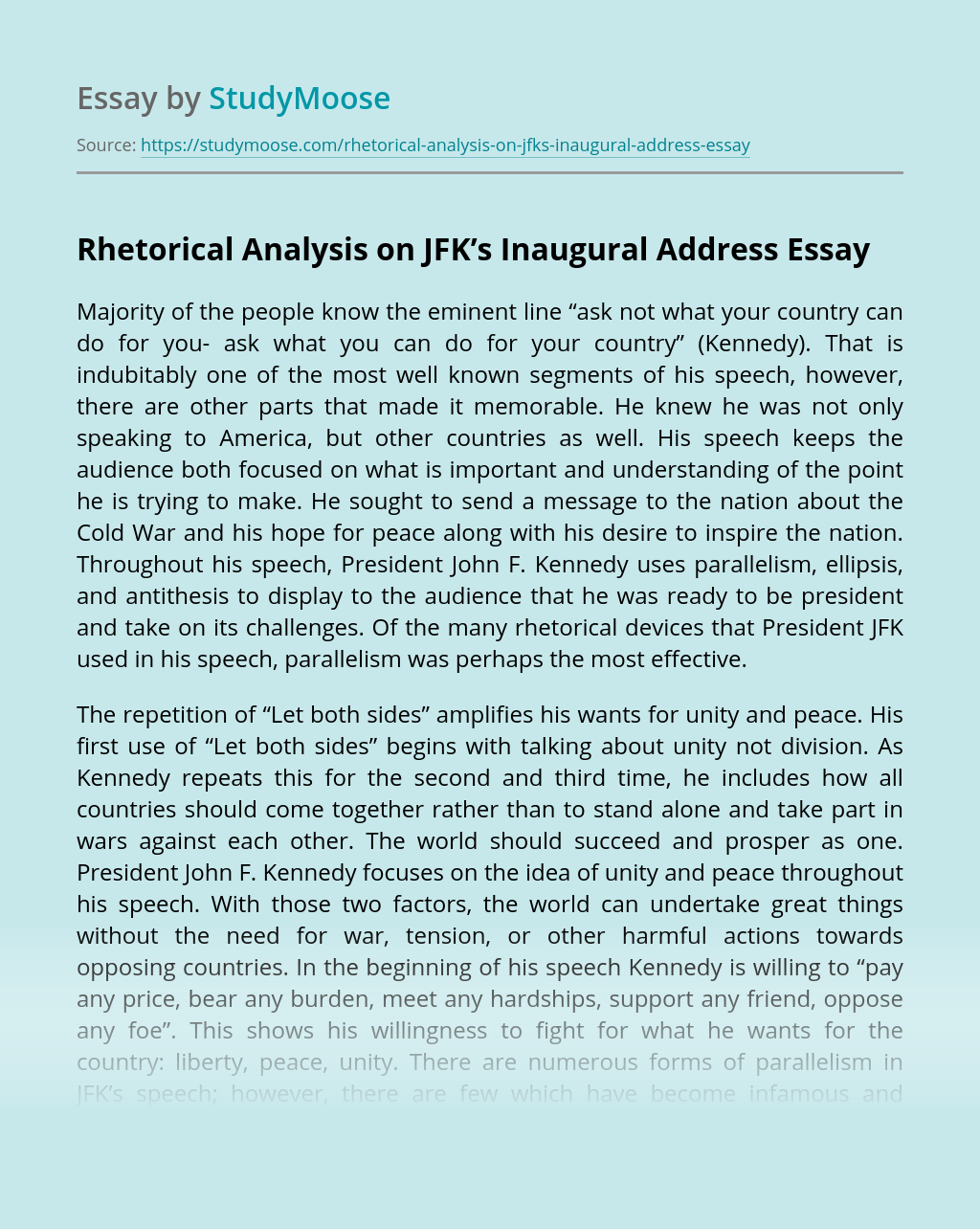