Thomas Jefferson had a big part in foreign policy. Western expansion was center stage in Jefferson’s vision for the United States.

Turn in your highest-quality paper
Get a qualified writer to help you with
“ Revolution of 1800 ”
Get high-quality paper
NEW! AI matching with writer

Also, the Louisiana Purchase was a big factor. Territory was taken by Spain, which was then eventually given to France. This caused the U.S. to be very unhappy. Foreign policy also opened the way for the Lewis and Clark expedition of 1804-1806. Lastly, foreign policy caused the Embargo Act of 1807.

During the election of 1800, the repeal of the Judiciary Act was successfully pushed in 1802, and this halted Federalist effort to expand their control over the federal court system.

Also, Jefferson failed in attempt to have arch-Federalist Samuel Chase removed from the Supreme Court. In the Marbury vs. Madison case in 1803, the result came out to be they established precedent for judicial review. Overall, Justice Marshall’s Supreme Court issued decisions that strengthened the federal government over the states.

Finally, politic events caused the election of 1800 to be named the Revolution of 1800. According to Jefferson, politics brought an end to repressive policies of the Federalists. Another thing is the ballet box.

With this, Americans avoided bloody revolution that the Kentucky Resolutions predicted. Jefferson once stated, “We are all Federalists; we are all Republicans.” By this, he is trying to convince people that everyone should be treated equal no matter what political party we follow. Politics also stated that men could be trusted with their own self government. After all this, the Democratic-Republicans take the presidency from the Federalists and win the next several elections. 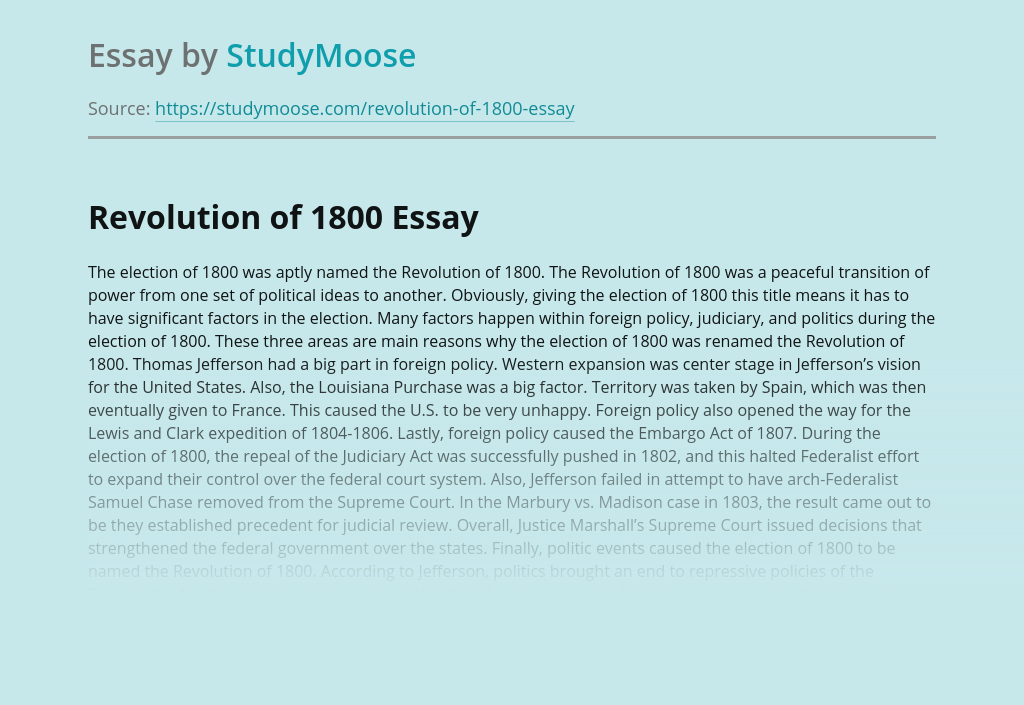 Turn in your highest-quality paper
Get a qualified writer to help you with
“ Revolution of 1800 ”
Get high-quality paper
Helping students since 2015
Stay Safe, Stay Original