Review "To Kill a Mockingbird" by Harper Lee

In the renowned ‘To Kill a Mockingbird’ novel written by Harper Lee, the protagonist, Jean Louise (Scout) Finch, narrates her childhood experiences and development over the course of three years. As Scout ages, she absorbs moral values and maturity, which is reflected in her changing attitudes and perspectives about the Maycomb County community. Scout also notes the coming of age of Jem and Dill, all who lost their innocence and blissful ignorance after being subjected to different experiences including the act of witnessing Tom Robinson’s court case, going to school, and even sneaking into the Radley’s property.

Don't use plagiarized sources. Get your custom essay on
“ Review “To Kill a Mockingbird” by Harper Lee ”
Get custom paper
NEW! smart matching with writer

The children’s innocence is represented by their various superstitions which occupy their idea of what’s morally right and wrong. Now that their innocence has been eroded, they are able to see clearly through the visage and find the cruelty and justice that inhibits deep within. Factors like parental or any other supervising adult influence, exposure to society and culture, and peer groups all spur moral growth within a child.

Since Scout’s mother had died, Aunt Alexandra instead served as a paradigm of femininity which was to influence Scout’s identity as a lady and not a tomboy. Maycomb, Alabama is a small southern town that dictates strict gender stereotypes, but Scout rebels against them and crosses the barrier between femininity and masculinity. Scout doesn’t find boys or clothes or playing with small stoves and tea sets interesting, all of which are general conventions for what a typical girl is interested in.

To change this behavior and maintain their family’s pride in heritage, Aunt Alexandra moves in with Atticus and his kids. She was thought to be suitable in helping emphasize feminine convention; she would uphold any moral that came along while doing her best to ‘arrange, advise, caution, and warn, ‘ (page 146). Being well-mannered, poised, and fashionable, Aunt Alexandra was the perfect classical representation of a Southern belle. Not only would she criticize the kid’s behavior and interests, but she would also determines their acquaintances. In particular, Aunt Alexandera discourages Scout from bringing Walter Cunningham home, insisting that they are not their type of people and Finch women aren’t in them either way. Slowly, Scout started to display small change in her behaviour due to this type of influence. For instance, Scout admired how her aunt was able to behave like a lady upon hearing the news about Tom Robinson’s gruesome death, and subsequently followed her lead, (page 271).

Though a tomboy at heart, Scout is finally able to understand that she must eventually conform to society’s definition of a lady.
Tom Robinson’s trial, an insight to the society of Maycomb, had a dynamic effect on Jem, Dill, and Scout, especially since this serves as the climax from their naivety to becoming less impressionable. Jem cannot grasp the unfairness of the trial and its outcome, and has had extensive discussions with his father. One particular conversation was followed by the statement, ‘The older you grow the more of it you’ll see, ” (page 220). Atticus is referring to the injustice that is imminent in general American society and the prejudice against individuals of color that becomes passively accepted as a fact of life when one gets older and conforms to societal standards. Because of Jem’s youthfulness, he had not spent enough of his time indulging in the outside world beyond his home, thus living in oblivion to these ongoing issues.

As a result, Jem gets very sensitive later on whenever the topic of Tom Robinson was brought up due to his denial that the society of Maycomb can reach that level of inhumanness and viciousness, especially when he used to embrace ideas that ‘Maycomb folks were the best folks in the world, ‘ and that Maycomb is nothing more than a safe, insular, and intimate community (page 246). Miss Maudie, a neighbor of the Finches, tells Jem to not be so caught up with his emotions since ‘things are never as bad as they seem, ‘ (page 245). She encourages Jem to evaluate the situation and to think about the fact that Judge Taylor specifically chose Atticus as the defense for Tom since Taylor saw Atticus specifically suit enough to put up a good enough defense. This offers Jem a new perspective about the court case, since many of these courageous acts can go unnoticed in times of controversy, while also showing Jem that there is still some good in the evil of Maycomb.

During the Tom Robinson court case, Mr. Gilmer’s interrogation of Tom serves as a wakeup call to Dill, who observes Mr. Gilmer’s racist attitude and compares it Atticus’s calm and ethical way of interacting with individuals. This causes Dill and Scout to step outside the courthouse, where they find Mr. Dolphus Raymond. Scout describes Mr. Raymond as evil due to his sinful background, demonstrating that Scout has developed prejudiced ideas of who is bad in Maycomb. Upon learning that Mr. Raymond only pretends to be drunk to justify why he fell in love with a black person, Scout is able to see that the prevalence of racism forces Mr. Raymond to hide his identity and degrade himself as a drunk man to avoid the ramifications. This serves as Scouts first encounter of ‘a being who deliberately perpetrated fraud against himself, ‘ (page 228). As they talk, Mr. Raymond suggests that they will learn to conform to the racism and lose their capacity to cry, and advises them to ‘step back inside the courthouse’ knowing that the longer the kids stay unaware of the bigger picture, the more morally degenerate they will grow up to be. If the younger generation grows up knowing about the adversity of racism without being racist themselves, they will be less blind to the prejudice that occurs in their society.

During the missionary society luncheon, Scout is exposed to the cultural values of the women and to the femininity role. There, the women talk about an ideal Christian society and spread awareness about areas that aren’t Christian and holy as Maycomb, specifically in the Muranas. As Mrs. Merriweather expresses condescending pity to these unholy tribes in Africa, she also demonstrates annoyance to black people who grieve for Tom Robinson’s conviction and goes on to further claim that ‘there are some good but misguided people in the town…’ ‘…who think they are doing right, ‘ referring to Atticus, (page 265). Miss Maudie in particular serves as a role model to Scout in how to deal with rude people like Mrs. Merriweather and Miss Stephanie Crawford of the missionary circle; this is achieved by keeping composure as an honorable woman and refrain from fighting—similar to Atticus’s values. Upon finding out that Tom died, Scout understands that to be a lady, one can’t let a tragedy affect their everyday life, thus one must plaster a fake smile and carry on as if one has never been informed about such a tragedy.

In a gathering full of women with similar values, Scout can find herself to be easily impressionable because of the pressure to fit in. On a broader scale, this can apply to real life situations where one will find themselves assimilating into a workplace or community, thus adopting morals, in order to be accepted.

Review "To Kill a Mockingbird" by Harper Lee. (2020, May 23). Retrieved from https://studymoose.com/review-to-kill-a-mockingbird-by-harper-lee-essay?post 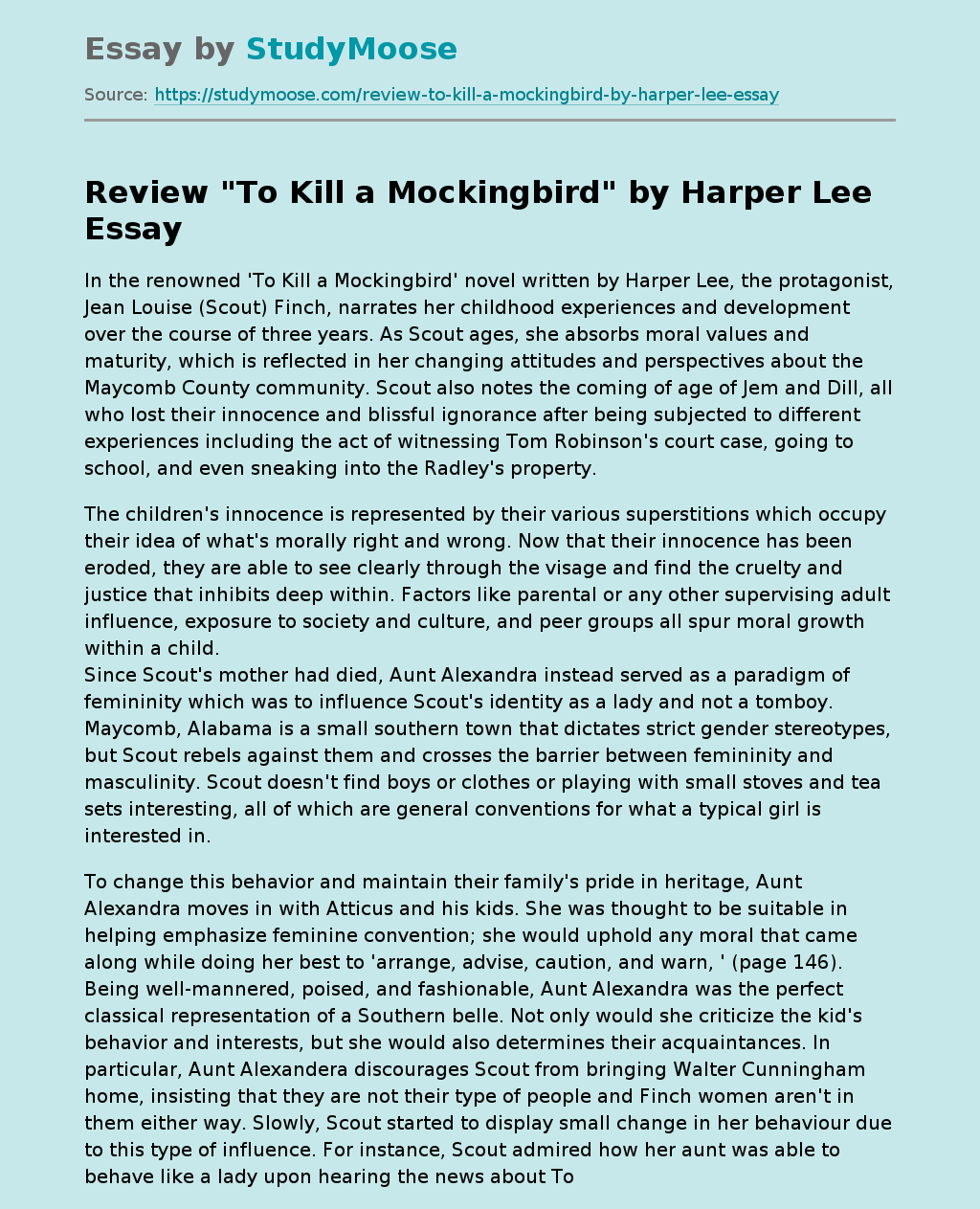