Review of The Pestle Analysis

The pestle analysis is a set of tools used to analysis and evaluate various factors which determines and affects the environment of an organization, which should be identified in order to aid company’s so they can achieve optimum performance. Pestle analysis’ also help in the decision making process a as it gives companies more knowledge about their business. Pestle analysis is divided in 6 main categories which are Political, Economic, Social, Technological, Legal, Environmental. Pestle analysis is basically gathering information about the each categories of pestle then Identifying which of the PESTLE factors represent opportunities or threats to company.

Don't use plagiarized sources. Get your custom essay on
“ Review of The Pestle Analysis ”
Get custom paper
NEW! smart matching with writer

apple: There are many problems which cannot be controllable by the company such as political uncertainties, war against terrorism, authority to work and health issues which can affect the sale of Apple’s product worldwide. As to reduce operating cost Apple has manufactures it product in different countries like Ireland, China, Korea, Czech Republic and Cork. If these countries face any political instability or any problem which causes to delay in manufacturing operation which will led to a big problem (Reisinger, D.

In most of the markets where Samsung operates, the political environment is helpful to its operations and though there are minor problems in some of the foreign markets like India, but overall Samsung can be said to be operating in markets where the political factors are benign. However, in recent
months, it has faced significant political headwinds in its home country of South Korea because of the country’s tensions with North Korea wherein the company has had to take into account not only the political instability but also the threat of war breaking out in the Korean Peninsula.

Apart from this, Samsung faces political pressures in many African and Latin American countries where the political environment is unstable and prone to frequent changes in the governing structures.

Reduction in recession and credit crunch could cause Sony to speed up its trade; meanwhile same situation could happen for the competitors of Sony, which may affect Sony negatively. Therefore, Sony needs to be very careful to its innovation and idea generation. Sony is globalized company so that changing in international law or trade restriction could affect the way in which Sony works, and Sony needs to follow the rules and regulations, that are imposed by the government. The terms legal always cannot come with term political because most of the time, by change in the politics of a country the legal terms and condition for business environment may remain the same. So that it could be named exceptionally, separate from political environments. (WritePass,2012)

Purchasing power depends on the World’s economic conditions. According to past few years, unemployment rate is very high in many countries which cause to decrease the sale of Apple products. Another reason was increase in oil prices which causes inflation in world’s economy. As a result of these economic factors, purchasing power of people reduced which negatively affected the sale of Apple products due to its higher price. But now world’s economic conditions are getting better and company has purchased itself foreign currencies, so Apple revenue has increased in the global market (Anon, n.d 2012).

since the ongoing global economic crisis has severely broken the purchasing power of consumers in many developed markets forcing Samsung to seek profitable ventures in the emerging markets. The key point to note here is that the macroeconomic environment in which Samsung operates globally is overwhelmed with uncertainty and instability leading to the company having had to reorient its strategies accordingly. The saving grace for the company is that it has adjusted rather well to the tapering off of the consumer disposable incomes in the developed world by expanding into the emerging and the developing markets.

Due to this, economic recession and credit crunch the exchange rate was affected which could be related to Sony because it is international business and it is the key point which need to be taken into consideration being an international business. certainly the price selection will effect also. Recently the economic situation of Sony got worst in Japan cause of the earthquake, which attacked Japan. Sony reported that it has 110 employees at two offices in Tokyo without injuries during . Now Sony focuses on replacement of the destroyed offices and keeping the relationship with their suppliers. (WritePass,2012)

Two factors always have been on forefront of Apple product throughout the history, the design and the quality. The purchasing of luxury products have gone up because the purchasing power of consumers has risen in different market across the world and people prefer to buy iPod, iPhones and latest technology iPad. As music industry growth has increased which is the biggest social influence on Apple because the main essential music store is iTunes. Therefore, Apple has gained so much from social factors because it’s defining a individual’s modern lifestyle.

Samsung being a Global company has had to act locally meaning that it has had to adopt a Global strategy in many emerging markets. Apart from this, Samsung has had to tailor its products to the fast changing consumer preferences in the various markets where it operates. The key point to note here is that Samsung operates in a market niche that is strongly influenced by the lifestyle preferences of consumers and given the fact that socio cultural factors are different in each country; it has had to reorient itself in each market accordingly.

customer demand, good communication with the people, Changes in lifestyle of people, the increase on woman leaving work. Generally educational level of population, the extent of educational facilities for women, and taking part in business life. These all are the key factors which Sony needs to consider and must have social involvement in most needed things for the people such as infrastructure system. In the case of ignorance of these factors socially Sony will damage its image. (WritePass,2012)

Apple always takes advantage because of its innovative and high technologies products. The large amount has invested in research and development field by Apple, that’s the reason Apple comes in top of the new innovative products

Samsung can be considered as being among the world’s leading innovative companies. This means that the company is at an advantage as far as harnessing the power of technology and driving innovation for sustainable business advantage is concerned. This has translated into an obsessive mission by the company to be ahead of the technological and innovation curve and a vision to dominate its rivals and competitors as far being the first to reach the market with its latest products is concerned.

it is essential for Sony to assess its external environment ,the technological factor. And Sony works around the technology every day. Sony should use new and upgraded technology in productivity which could may give Sony competitive advantages and leading market. By using the new technology Sony can do research by which Sony can respond to the demand of its customers. for example the introduction of ps4 which is an improvement of ps3 (WritePass,2012)

apples business is subject to a variety of us laws and international law , rules and policies. therefore any can in these law may affect apple. in 2012 apple won a lawsuit over Samsung in which the jury ordered Samsung to pay 1.05 billion pounds to apple . (Anon, n.d 2012).

Samsung has had to face heavy penalties for its alleged imitation of the Apple’s iPad and iPhone and this has led to the company taking a beating as far as public perceptions and consumer approval of its strategies are concerned. It remains to be seen as to how the company would wriggle out of the legal maze that it finds itself in the developed markets because of the various lawsuits.

due to the new us laws and regulation recycling is the responsibility of the manufacturer and apple introduced a domstict recgling facilty insted of shipping the waste overseas. furthermore apple operates in a way that conserve the environment and safe for its workers (Anon, n.d 2012).

With the rise of the ethical consumer who wants his or her brands to source and make the products in a socially and environmentally responsible manner, Samsung has to be aware of the need to make its products to satiate the ethical chic consumer. This means that it has to ensure that it does not compromise on the working conditions or the wages it pays to its labor who are engaged in making the final product.

Review of The Pestle Analysis. (2016, Jun 15). Retrieved from https://studymoose.com/review-of-the-pestle-analysis-essay 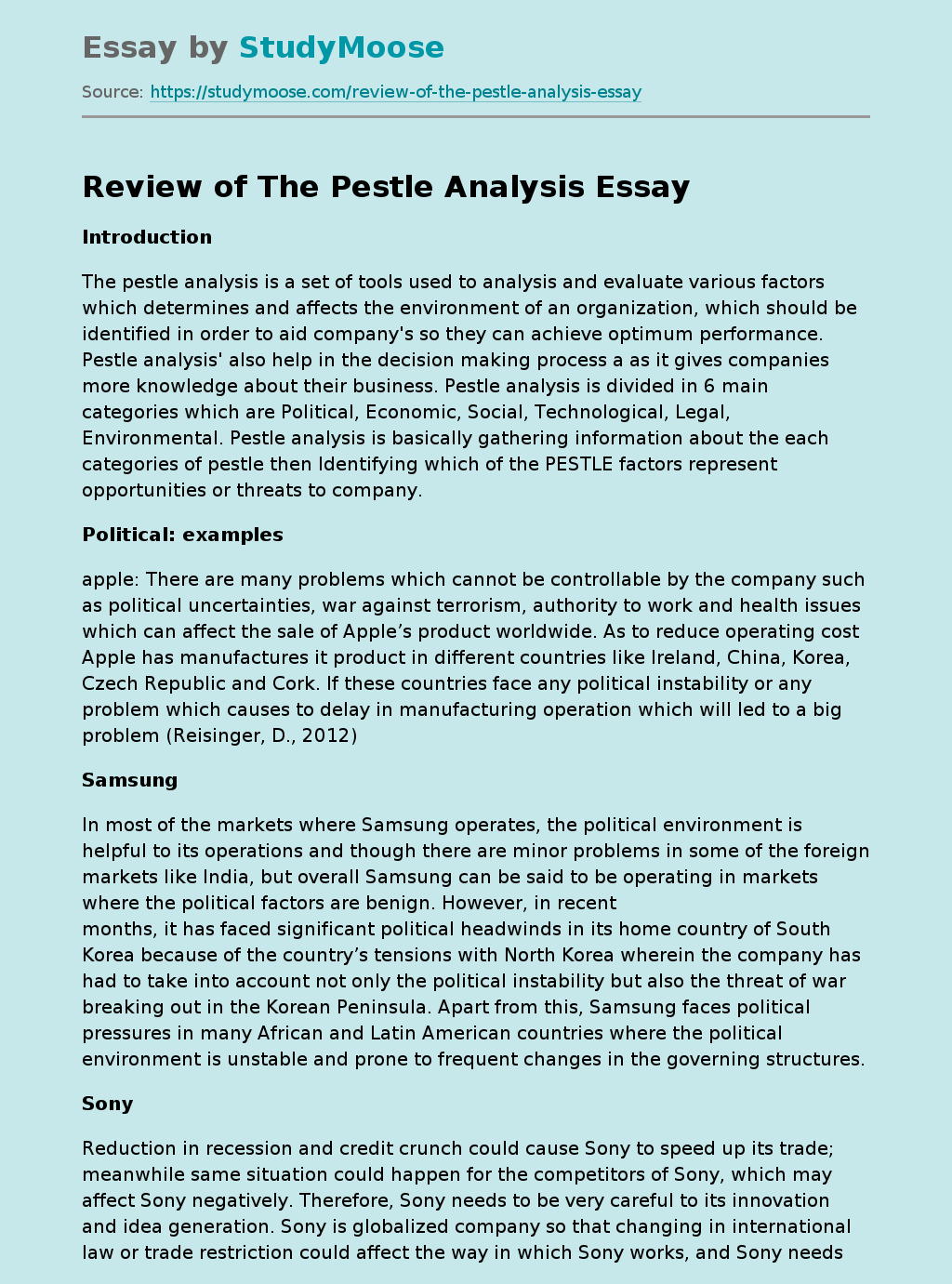