A Pestle Analysis of Tourism Industry

Using the PESTEL framework, identify and discuss the key factors in the macro environment that influence the tourism industry. Political: A large influence on the tourism industry can be the stability of government. If the government in unstable it can be viewed as dangerous and unpleasant to visit. This can have a huge impact on that countries tourism numbers. Some governments also choose to make shopping tax-free for tourists, as tourists have the right to claim back VAT (Value-Added Tax)/GST (Goods and Services Tax).

Don't use plagiarized sources.
Get Your Custom Essay on A Pestle Analysis of Tourism Industry Just from $13,9/Page

By making shopping in foreign countries tax free it has attracted tourists to these countries. As stated in case one terrorist attacks in 2001 had a huge impact on the tourism industry. People were worried for their safety so were much more subdued to travel. Therefore it has been important that the government implemented tighter security and immigration laws. Economic: Exchange rates can have an impact on tourism, as when currency strengthens or weakens it can affect spending overseas.

For instance when the British pound is strong against the U. S dollar it influences Britons to travel overseas to the US, as they get more for their dollar. However it has a negative effect on UK tourism as the Americans are put off travelling to the UK and instead look to holiday in locations within the US (The Guardian, 2007). With the British Pound still being strong against other currencies this is relevant to the Tourism Industry today. (Rates List, 2012) Interest rates can too have an effect on the tourism industry. If interest rates increase payments to loans also increase, therefore people who have loans consequently have less disposable income.

With less disposable income people are less inclined to spend it on luxury items, like holidaying. However, in the current state interest rates in the UK are expected to stay low (0. 5%), due to the on-going recovery from the Eurozone crisis (BBC, 2012). Furthermore with the current economic recession people are still struggling, some even to hold down jobs. Consequently, people have less money and can’t afford such extravagant holidays, like going overseas for long periods of time. Therefore shorter and cheaper holidays look far more appealing, for instance travelling by car just for a weekend.

Social: There is an aging population in many countries. With an aging population the needs of the market will change. People who are in a later time of their life have different needs and wants. There are more and more people who are in their later years who want to travel, to cater for this it may mean advertising focused more on comfort and relaxation rather than thrill ridden activities. There is an ever increasing attitude for positivity towards ‘going green’. People are purposely searching to only buy products from companies with sustainable practises in place.

Hence, it is important for the tourism industry to take on these attitudes as well, as it is becoming an important part of our society today to have environmental policies incorporated into everyday business practises The Asian population is increasing at a rapid pace. There are 3. 9billion people in Asia, which is 60% of the world’s population. As stated in the 2010/11 ITB World Travel Trends Report, “By 2020, the number of Chinese outbound travellers could double and the number of Indians travelling abroad could grow fivefold. This would raise both countries within a decade to the top six outbound markets worldwide. This shows just how quick China and India are becoming powerful players in the tourism industry.

Technological: In our world today new technologies are forever being made to be faster and more efficient as people want things to take less and less time. Internet has made a huge influence on the tourism industry. There has been a steady incline of online sales. For example in 2005 online bookings for TUI were 15%, which had doubled in 2008 to 30% (Viardot, 2009). Booking online has made it much easier for individuals to book their own holidays.

As well that with online bookings it allows for the customers to do their own research of where the best places for them to go is, rather than using a travel agent. Secondly, technologies are so advanced now that communicating with people around the globe is made much easier. For instance, people on opposite sides of the world can chat easily, possibly even to strangers. This leads to the new trend that people can blog and communicate their thoughts to millions of people with a simple click of a button. This new way of communicating can have a huge impact on the tourism industry.

People all over the world are sharing their thoughts and feelings about everything they do, whether that’s a new product or an exciting new experience. Environmental: In this current decade environmental concerns have greatly became a huge influence in all business industries. Aviation is a large part of tourism. Sadly it is also a huge contributor to CO2 emissions. An increase in carbon emissions is a major threat to climate conditions. Consequently there have been more taxes placed on air travel. This increase in taxes will raise the prices of flying therefore could discourage people to go abroad.

Natural disasters can also affect a country’s tourism. People are less likely to travel somewhere which is viewed as dangerous and secondly the disaster could ruin tourist attractions. Legal: There are a lot of laws and regulations regarding aviation safety (Department of travel, 2009). Following regulations is important as to ensure everything is done to prevent any problems. As if people lose faith in airlines being safe it could have an impact on tourism. Another legal point is that when companies merge or work with companies in different countries they need to be aware of the laws and regulations overseas.

A Pestle Analysis of Tourism Industry. (2017, Jan 26). Retrieved from https://studymoose.com/a-pestle-analysis-of-tourism-industry-essay 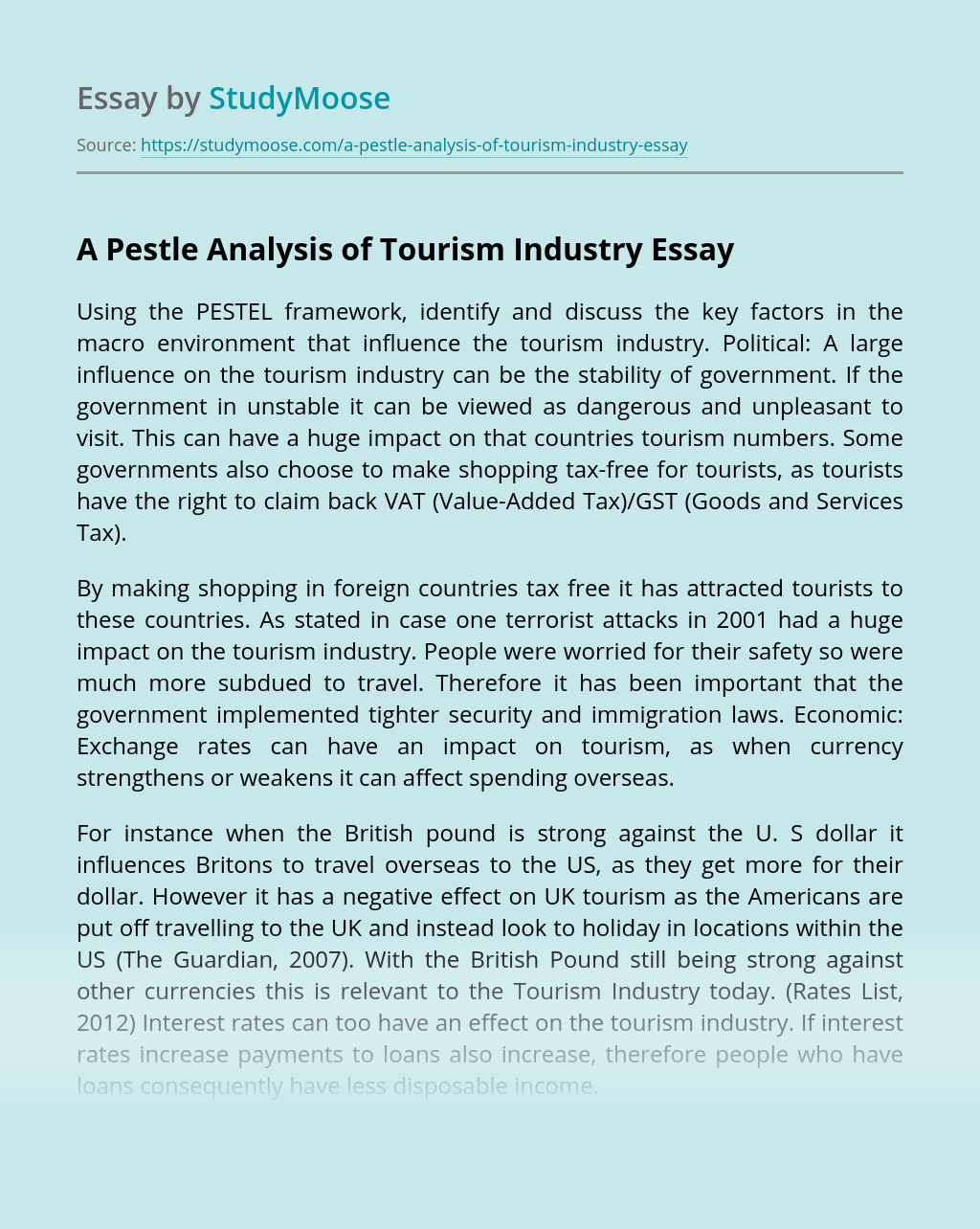 The word TOURISM refers tour which is derived from the Latin word “TORNUS” . It means a tool for describing a circle of turner’s wheel (Bhatia, 2002). It is very important pleasure activity where tourists travel from one to another countries and one region to another region as well.And Tourism also involves money for getting...

View sample
The Concept of Ecotourism

The researchwithin the area of ecotourism still appears to be at its infancy stage. The definitional perspective of the concept is lacking both in terms of scope and criteria used, as well as in aspects of its planning and operationalisation. There are a variety of ecotourismdefinitions all reflecting a range of paradigms and perspectives. The...

The prospects of the effectiveness of marketing methods to promote tourism destinations could spell a huge difference, if done with careful planning and research. Tourism demand evolved rapidly in the 1990s altering conventional wisdom and changing a whole range of factors influencing tourism planning and management. Attempting to interpret tourism phenomena and forecast the future...

Abstract The purpose of the study is to investigate the development of tourism in Belarus. The main question of my project is: to identify the problems of tourism development in Belarus. While doing this research, I identified on which stage of development tourism industry is in the Republic of Belarus. Don't use plagiarized sources. Get...

1. Executive Summary There is a huge vacant area in all over the world to enhance the Tourism. Almost all the countries are developing their Tourism industry in their country. Sri Lanka is such one of them becoming more popular in the Asian Country. So it’s a good opportunity to Investors to come and invest...