Revenge of Laertes and Hamlet

The drama “Hamlet” written by a great Playwright and actor who is widely regarded as the greatest writer in the English language and the world’s greatest dramatic, William Shakespeare. This drama was written around 1600 in the final years of the rule of Queen of England, Elizabeth I. There are so many Shakespeare’s plays that are played in that period, but Hamlet is the best one which concerns the transfer of power one monarch to the other. Hamlet is the revenge type of Elizabeth tragedy, in which the avenger seeks to exact revenge for the death of his father dies achieving that aim.

Don't use plagiarized sources. Get your custom essay on
“ Revenge of Laertes and Hamlet ”
Get custom paper
NEW! smart matching with writer

The center of attention of this drama particularly focuses on the unpredictability, disloyalty, disruption, and the general sense of anxiety and fear that surround them. This drama also shows a great deal of action on the stage, including violent action. The setting of the drama starts takes place in various parts of Elsinore Castle in Denmark.

The circumstance that Shakespeare presents at the beginning of Hamlet is that a most powerful and adorable king has died, and the throne that might have become heir to his brother, Claudius not by his son.

No one knows in the castle, what to expect from a new one and still lamenting the old king having a fearful and suspicious mind. A ghost appears to Hamlet, tells him his father was murdered by his uncle and tells him to avenge the death. How is the one to know how to talk all that? There are no such things as a ghost, are there? If there are, what are they and where do they come from” from God? Or form devil, urging one to do evil deeds so one’s soul will be damned to hell? How is Hamlet to know? How are we to know? Was his father murdered? It appeared to be a natural death.

And if he was murdered, is it Hamlet’s duty to take revenge? Hamlet’s father was catholic who complains that he was killed without having an opportunity to confess, be absolved, and receives the last rites of the church. Hamlet would have been taught that Christians are not seeking revenge: “Vengeance is mine, I will repay, saith the Lord”. How Is Hamlet to know to respond to it?

Once Hamlet came to know that his uncle king, Claudius killed his dad, Hamlet feels morally and legally obliged to take revenge, but he is not sure, what action should take and how to execute those actions. He begins to behave out of frustration and eventually kills Polonius by mistakes. He drags with mental conflict and falls in a dilemma which makes an end of Hamlet horrifying behavior with her mother. The play exposes Hamlet is during three crises. First, his nation is under attack, second is the royal family Is falling apart and last is dragging with mental conflict. Denmark is in a political crisis; Claudius prepares a diplomatic strategy to divert the threat from Fortinbras. We also see that as far as Hamlet is concerned his family is in crisis, Gertrude and Claudius are worried about his mood. Hamlet starts to show signs of really going mad and at that the same time Claudius becomes suspicious of Hamlet, which creates an external pressure on Hamlet’s act. Hamlet begins debating whether to kill himself: “To be or not to be- that is the question” (Act 3, Scene 1).

Hamlet’s misogynistic feelings make us know how much Hamlet Is obsessed to kill Claudius in order to take revenge on his father and taking his mother away from Claudius. Claudius becomes suspicious that Hamlet’s madness going to present “some danger” (Act 3, Scene 1) and decides to have Hamlet sent away.

The Murder of Gonzalez performs to “catch the conscience of the king” (Act 1, scene 2) and gets solid evidence of Claudius’s guilt. That makes him completely mad and his behavior at the play is so provocative that makes Claudius aggressive and leave the play. Claudius on his knees tries to pray and still has impure heart, thinking about whether not to lose the queen and crown. Hamlet has again another chance to kill but he loses it. Hamlet thinks that if he kills Claudius then Villain goes to heaven that he never wants that. So, he decides to kill when he is drunk and will go to hell. Hamlet accuses Gertrude of being involved in his father’s death but the way he’s acting, portrays to Gertrude her son is mad “mad, as the sea and wind/ when they each content which is mightier” (Act 3, Scene 4). Hamlet acting madly and kills Polonius by mistake, considering that is king behind the curtain.

Because of the Polonius death Hamlet is sent away to message on the voyage. On the other side, Ophelia goes mad. When Hamlet comes back to Elsinore, he no longer seems to be concerned with revenge, which he hardly mentions after this point in the play. Hamlet is unable to come to any conclusion about the purpose of death. He also reports to Horatio how he signed the death warrants of his childhood friends I.e. Rosencrantz and Guildenstern to save his own life. He is lamenting because of his innocent people get killed. Laertes returns from France to avenge his father’s death. Both Claudius and Laertes decide to kill Hamlet. Claudius wants to throw away the thorn that comes in way of his life. Unfortunately, Gertrude Is poisoned by mistakes, and later both Hamlet and Laertes are poisoned. Claudius is in predicament and decides to escape but, he is also killed by Hamlet. The burning obsession is not still get cooled inside of his heart. He still has a lot to convey “If I had time [….] O I could tell you – / But let it be” (Act 5, Scene 2). He requested Horatio to tell his story when he passed away.

For example, Hamlet and Laertes fight and die on the fifth act of Hamlet, and the play ends with four dead bodies strewn across the set.
As you read the play, you will come to understand why people have been fascinated by Hamlet for over four hundred years.

Revenge of Laertes and Hamlet. (2020, Sep 04). Retrieved from http://studymoose.com/revenge-of-laertes-and-hamlet-essay 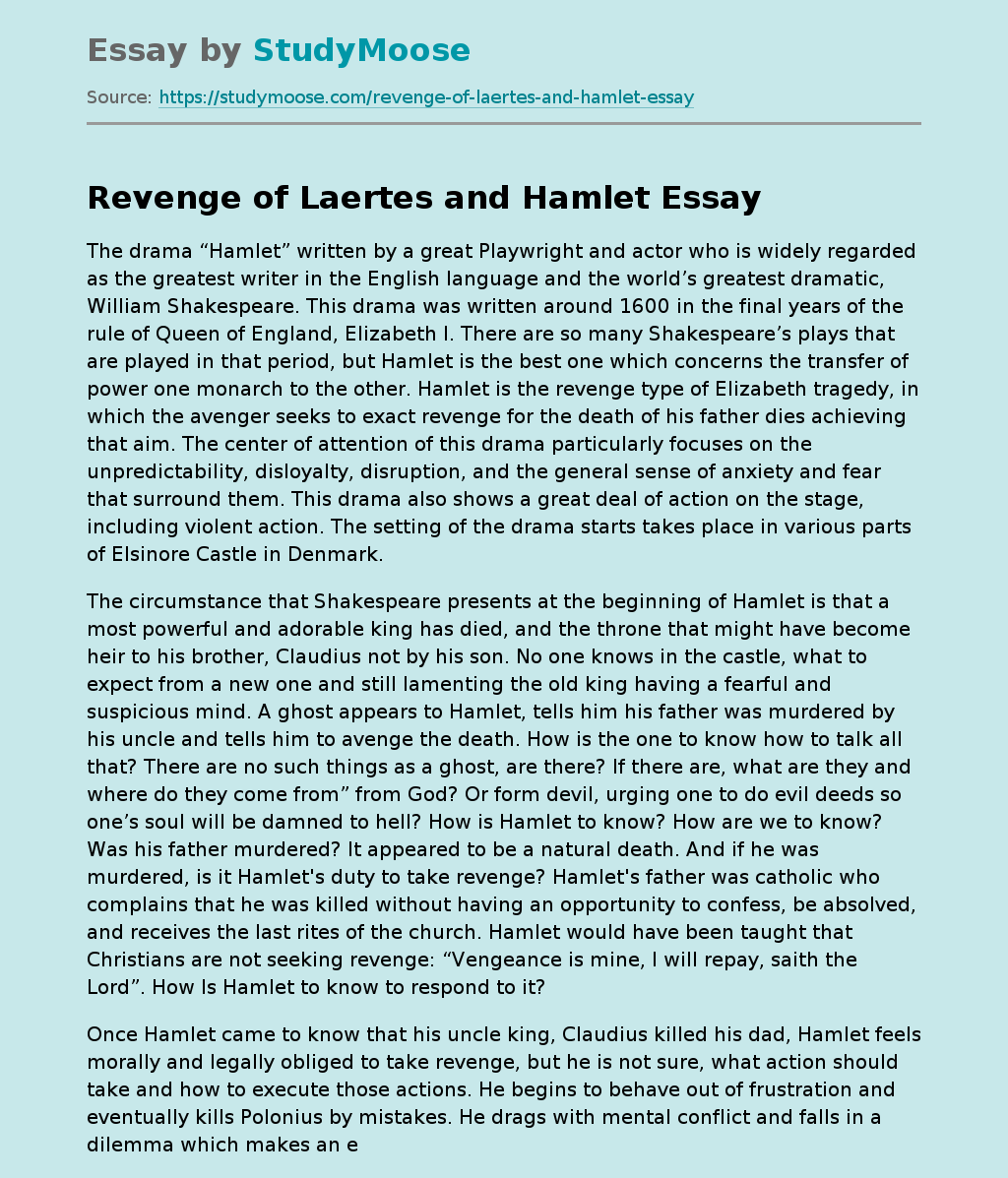