Response Journal for The Charmer by Budge Wilson

Budge Wilson’s “The Charmer” is a remarkable tale of loss, morality, and love. It is the story of how a young girl comes to realize that her devilishly handsome brother is nothing more than a charmer. It is set in a 1950’s Halifax home where Zachary, the narrator’s brother, repeatedly abuses his privileges and takes advantage of his family.

Zack seems to believe that his looks will help him escape any situation he may find himself in. He uses his sense of humour and charm to manipulate his family and friends.

Turn in your highest-quality paper
Get a qualified writer to help you with
“ Response Journal for The Charmer by Budge Wilson ”
Get high-quality paper
NEW! AI matching with writer

Zack has a way of making those around him feel special, and uses this quality to his advantage. His sister, Winnifred, washes his bike and fetches his baseball glove just to see his “flashing Colgate smile” and to be called Posie, the nickname he has chosen for her to let her know that she has measured up. He is aware that the cake his mother has baked is not meant for him, yet he eats it anyway.

He offers an insincere but convincing apology, and she starts to bake another cake. His family are his willing slaves, and it is only after the tragedy of Lizzie’s death that they finally begin to see who Zachary really is.

Zack is the imperfect model son, but his family is too blinded by love to see his flaws. His fake apologies somehow manage to touch their hearts, and allow them to forgive all of his mistakes. Zachary steals money and alcohol from his parents, but manages to get away with it.

He gambles and crashes the family car, but goes unpunished. He is “the only son, the only brother, the oldest child,” but even more than that, he is as the title implies, the charmer.

Despite his good looks and charming personality, Zachary does not accomplish anything in life. At twenty-four, he still lives at home, still wolfs down chocolate cakes, and still borrows the family car. He spends his money on his girlfriends and his alcohol, and gambles away what is left of it. He loses job after job, and is becoming, if he is not yet, an alcoholic. Zack has so much offered to him, but fails to apply himself to improve his situation. However, he cannot be held entirely responsible for his failures, as his family holds some of the blame. If they had only shown less sympathy, and had seen past his false facade, he would have learned early on that he could not charm his way through life.

The conclusion of the story is quite ironic, as the narrator’s daughter displays the very same deceiving qualities that her brother was famous for. Winnifred describes her daughter, Lizzie, as “pretty and mischievous” and is aware that Zachary was the same way. She is reminded of the manner in which her parents treated Zachary, and learns from their mistakes. She refuses to allow her daughter to become what Zack has, and punishes her accordingly.

To portray the themes of this story, the author used a number of literary devices such as, allusion, characterization, flashback and paradox. Allusion is clear as the author refers to Zachary’s “Colgate” smile, and to the famous people that Winnifred often sees on television. These stars include Clark Gable, John Wayne, Kirk Douglas, Steve McQueen, Mick Jagger, John Lennon, Burt Reynolds, and Tyrone Power. Characterization is used to create Zachary’s character. The narrator says that her brother is charming, intelligent, and fun, but nevertheless a devil. Others say that he is sensitive, while he thinks he can escape any situation. He interacts with other characters, and uses them to further his own cause.

The entire story is based on flashback, since the narrator is recounting the events of her childhood, and finishes the story by speaking of an incident that takes place when she is an adult. The paradox of this story is evident when the mother refers to Zack and says, “This is his way of coping. He’s probably suffering more than the rest of us.” The truth of this statement is highly improbable, since Zack seems to care for no one but himself, and does not even bother to visit his younger sister though he knows she is deathly ill. However, the character may be suffering emotional pain that his actions do not let on.

“The Charmer” presents a timeless, captivating situation, which every reader can in one way or another, relate to. It is the tale of a sister, who sees her brother for who he is, and not who he pretends to be. It is a tale of a mother who cannot accept that her son is imperfect, and of a father who struggles to see past his own love for his son. Primarily, however, it is the story of one boy who ages into adulthood, yet does not mature, and who hurts his family, yet feels no remorse beyond that which he pretends to.

Response Journal for The Charmer by Budge Wilson. (2016, Jun 28). Retrieved from https://studymoose.com/response-journal-for-the-charmer-by-budge-wilson-essay 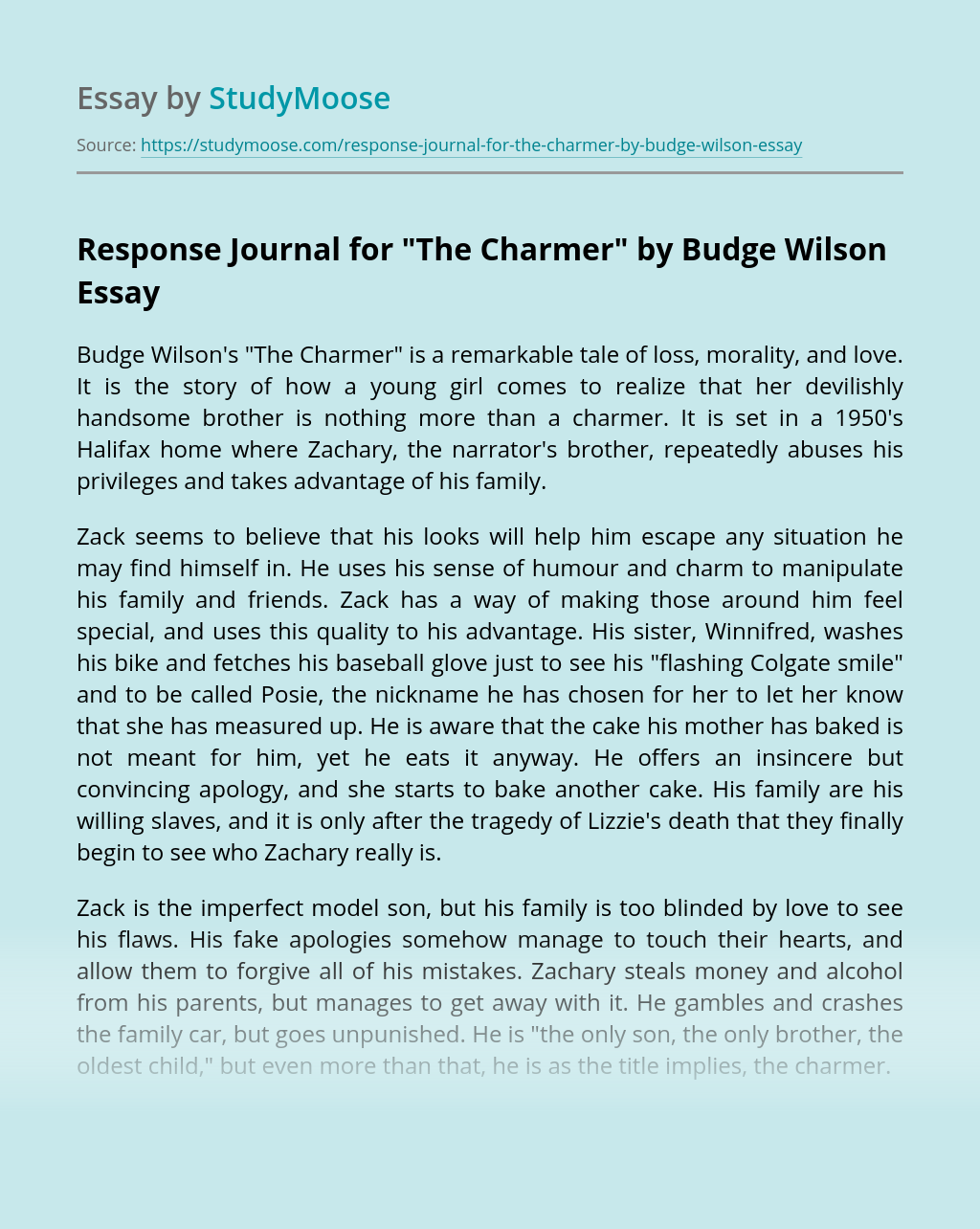 Turn in your highest-quality paper
Get a qualified writer to help you with
“ Response Journal for The Charmer by Budge Wilson ”
Get high-quality paper
Helping students since 2015
Stay Safe, Stay Original