WHY HAS WILSON LUMBER BORROWED INCREASING AMOUNTS DESPITE ITS CONSISTENT PROFITABILITY?

Although the company seems to be profitable, it has faced shortage of cash. It happened due to increase in Accounts Receivable as well as Inventories. On the other hand, Accounts Payable does not increase that rapidly and difficulties regarding cash collection become evident. Furthermore, the cash collection cycle becomes larger (59 days in year 2003, while more than 70 in year 2006).

Turn in your highest-quality paper
Get a qualified writer to help you with
“ Case study Wilson Lumber Company ”
Get high-quality paper
NEW! AI matching with writer

During 2003- 2005 the company borrowed money (long term loan) from bank to finance its operations.

In general profitability ratios are positive, however, could be higher. That might be a signal of cost reduction. On the other hand, the company becomes less liquid and its liquidity ratios keep dropping within all years. Both liquidity rations inform that there is lack of cash in the company.

The leverage ratios show that company has increased its long term debt and now company becomes more financed by debt than equity. As the debt grows, the interest rates become larger and thus the interest coverage ratio becomes smaller. The activity ratios point out that the cash collection cycle becomes larger therefore company faces some serious issues regarding cash collection (59 days in 2003 whereas 78 in year 2006).

TO ESTIMATE THE SUSTAINABLE GROWTH RATE (SGR) THAT WLC CAN SUSTAIN WITHOUT FURTHER WEAKENING THE BALANCE SHEET ASSUMING:

NO CHANGE IN THE RATIO OF SALES TO TOTAL ASSETS,

NO CHANGE IN THE RATIO OF TOTAL LIABILITIES TO OWNERS’ EQUITY

NO EQUITY ISSUES OR REPURCHASES

A CONTINUATION OF THE POLICY OF PAYING NO DIVIDENDS.

HOW ATTRACTIVE IS TO TAKE THE TRADE DISCOUNTS ?

IF MR. WILSON IS OFFERED A DISCOUNT OF 2% FOR A PAYMENT MADE IN 10 DAYS AND DOES NOT IN FACT 50 DAYS;

IF MR. WILSON OFFERS HIS CUSTOMERS TERMS OF 2 % DISCOUNT FOR PAYMENT IN 10 DAYS WHAT WOULD COST.

I would prefer to take a discount because it has a lower interest rate.

DO YOU AGREE WITH MR. WILSON’S ESTIMATE OF THE COMPANY’S LOAN REQUIREMENTS? HOW MUCH WILL HE NEED TO FINANCE THE EXPECTED EXPANSION IN SALES TO $ 5.5 MILLION IN 2006 AND TO TAKE ALL TRADE DISCOUNTS?

We calculated that Mr. Wilson would need an estimate of 982000 not 750000 to finance the expected expansion. As well after viewing the liquidity ratios who tend to decrease in last years, it would be risky to take such a loan.

AS MR. WILSON’S FINANCIAL ADVISER, WOULD YOU URGE HIM TO GO AHEAD WITH, OR TO RECONSIDER, HIS ANTICIPATED EXPANSION AND HIS PLANS FOR ADDITIONAL DEBT FINANCING ?

As financial advisor I would urge Mr Wilson to take the loan, despite the fact of low liquidity and increase in debt throughout the last years. The loan from Suburban National bank is not sufficient for meeting the needs of Mr Wilsons company, furthermore, the debt continues to rise due to the buy-out of Mr Holtz; this also has increased the low liquidity of the company. However, the reasons why I would recommend taking the loan are:

So far Mr Wilson was unable to take advantage of the trade discounts (2% off if paid within 10 days), however by taking loan he will be able to do so, in addition, this will also help to increase the profitability by reducing the costs.

The EBIT is also increasing steadily, however with the necessary loan Mr Wilson could increase its earnings by one third in only one year.

Also very good indicator that Mr Wilson should take the loan is the return on invested capital which is actually higher than cost of capital (WACC). Even in year 2006 it is estimated that the ROI will be higher than WACC, while in the next year the ROI will continue to grow.

AS THE BANKER, WOULD YOU APPROVE MR. WILSON’S LOAN REQUEST, AND, IF SO, WHAT CONDITIONS WOULD YOU PUT ON THE LOAN ? WHAT ABOUT WORKING CAPITAL MANAGEMENT WOULD YOU RECOMMEND HIM?

As a banker I would approve the loan as the company itself does not show great risks. Most of the bad indicators (low liquidity) are created by the limited loan provided by Suburban National Bank and also by the customers who does not pay immediately. The rather big inventory also is not that bad indicator as it also has it benefits- can be ready for unexpected orders.

Good indicators which show that Mr Wilsons Company is performing are the increase in sales, net income, and return on equity.

If Mr Wilson would like to take the loan, first he would have to agree to such conditions:

Maintain the capital at agreed level;

Additional investments in fixed assets could be made only with the prior approval of the bank;

The accounts receivables must be reduced, by reducing the payment time for customers. 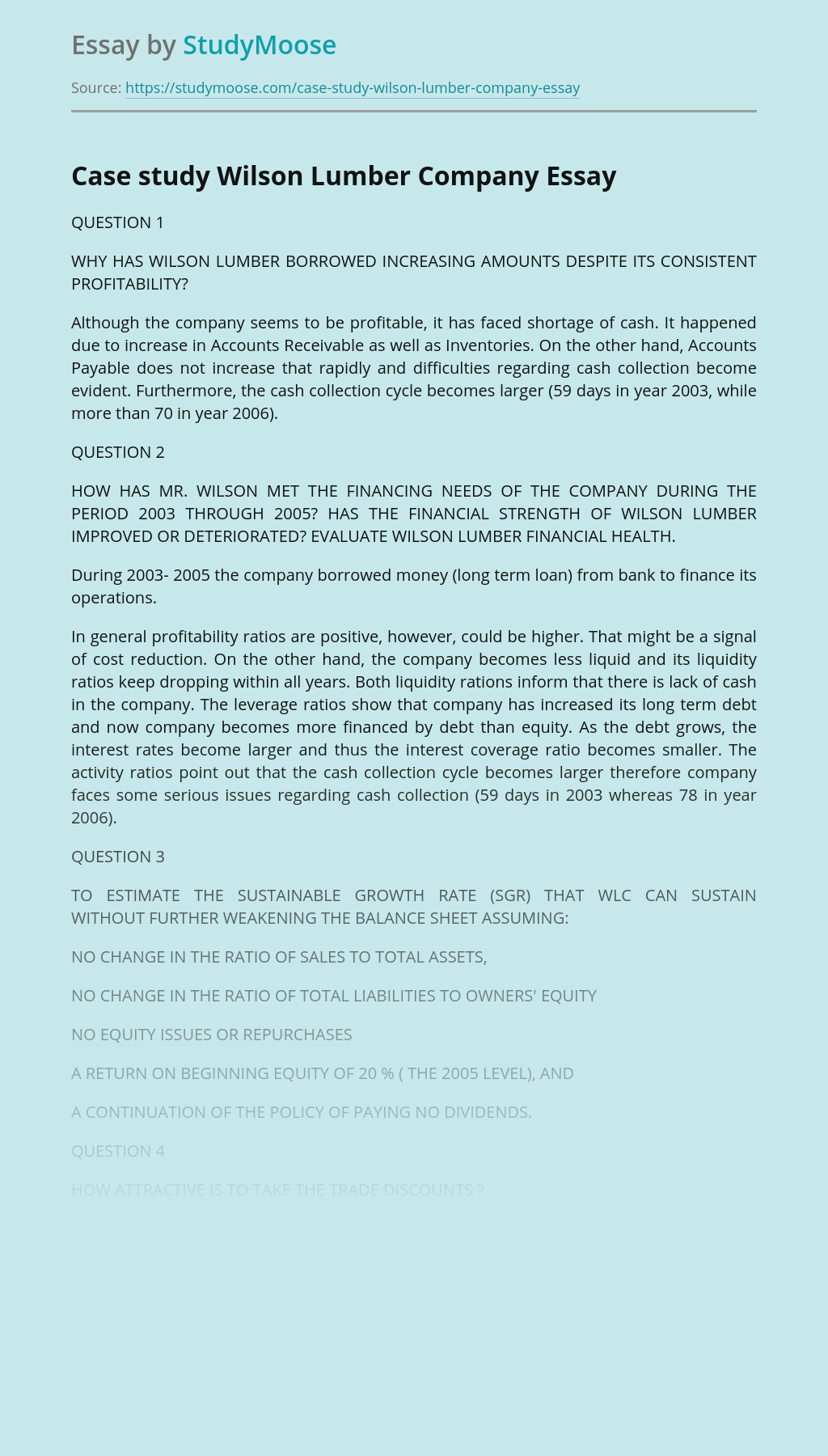 Turn in your highest-quality paper
Get a qualified writer to help you with
“ Case study Wilson Lumber Company ”
Get high-quality paper
Helping students since 2015
Stay Safe, Stay Original