For more than a decade now, many Filipinos have trekked to EDSA to commemorate the anniversary of the February 1986 “People Power Revolution,” marking the overthrow of President Marcos’ regime.

This year the customary rituals – ecumenical invocations, on-site masses, eloquent political speeches, martial marches, colorful parades, star-studded shows and other diversionary entertainment – will be performed as before. The celebration will probably take a more subdued tone as the country, as well as the region, reels from the economic slowdown and disruptive challenges to erstwhile secure political orders.

For most people who persist in joining the EDSA celebration, few are inspired to explore its historical or spiritual connotations. It appears sufficient that this historic stretch of the national highway is momentarily transformed into a convenient amusement park.

After all, people who live precariously from moment to moment, as more Filipinos now must, are not inclined to burden themselves contemplating the depressing state of the nation. Better the light entertainment of the moment than the serious reflection which a continuing sense of national purpose and civic responsibility demands.

Yet, amidst today’s celebration of the 1986 People Power Revolution, one really ought to inquire into the meaning of this historic mass action, the original context within which it might be more fully appreciated and the painful but now compelling perspective for assessing the current relevance of this experience.

In 1986, a critical mass of Filipinos found Marcos and the political order he created sufficiently revolting; and, throwing their support behind a small band of desperate military coup plotters, forced the ailing dictator, his family and his subalterns to flee the country.

The popular revolt succeeded in toppling Marcos’ rule, but lacking a clearly revolutionary ideology, a revolutionary program of government, a
revolutionary political leadership and indeed a revolutionary mass base, the rising could not go much beyond ridding the country of the hated Marcos and dismantling the formal political infrastructure of his dictatorship.

The leaders and other supporters of the “people power revolution” could have worked hard to give substance to this media-projected identity. Indeed the momentum of the popular revolt could have been sustained and immediately magnified had a series of progressive government policies been launched and implemented with revolutionary rigor by the successor regime.

These policies included people empowerment particularly at the local level, national unification embracing the traditionally marginalized and even the main rebel groups, recovery of plundered public resources and relentless pursuit of those responsible for the rape of an entire nation across several generations.

The revolutionary possibilities indicated by these early policies of the new government however would remain illusory. Traditional vested interest groups (e.g. landed wealth, those in business and the religious) as well as politicized new players in Philippine politics (e.g. the military) developed more than enough political stakes in the post-Edsa political arrangements and predictably shirked from the revolutionary thrusts of these early policies.

As had happened so often in the history of most nations, collaborationist Philippine elites thought it best to undertake a politics of restoration where their primacy would be guaranteed rather than to assist in the building of a new and, for the historically privileged, a problematic, even outrightly perilous democratic regime. Most leaders of the 1986 revolt understandably settled on the reassuring shores of oligarchic history rather than embark on the uncharted, revolutionary seas searching for the proverbial terra incognita, a conceivably democratic national destiny.

National unification was pursued without any critical attention being paid to what elements could legitimately be included in or excluded from national
life. Thus economic plunderers and scoundrels automatically were inserted as integral parts of post-Marcos transition.

It did not matter much, that for more than two decades, they had abused and looted the nation. National reconciliation was similarly uncritically pursued and perpetrators of appalling crimes, including economic brigandage and human rights abuses, were courted without requiring them to undertake significant restitution to the victims of their rapacity while they retained control of government offices at various levels.

No revolutionary possibility could survive amidst policies which glossed over the antithetical character of the nation’s traitors and its patriots, the victimizers and their victims, the plunderers and the plundered.

A nation that is successfully misled by its leaders into adopting this convenient and self-serving ambiguity learns to readily forgive and hence to also easily forget. Without a clear memory, no nation can hope to sustain an irreversible revolution, the only truly reliable path to its deserved destiny.

The historical record since 1986 reflects the implacable effects of reformist policies which do not basically alter the substantive character of Philippine society and its core political system. Economic and political inequities remain at high levels, with poverty engulfing probably more than 6 years percent of the nation’s families (this count is often registered in academic surveys although the government’s own estimates would improve this profile, cutting down the estimated poverty incidence rate to less than 40 percent by 1997).

Despite the much touted improvements in national economic performance particularly between 1992 and 1997, Philippine per capita income remains low in relation to countries like Thailand and Malaysia and only slightly better than Indonesia within the region. Independent surveys also indicate that gains made by the national economy in the last 60 have been largely limited to the better-off and had not significantly trickled down to the poorer
Filipinos.

Politically, local governments have gained more autonomy, the oligarchic and dynastic characteristics of the political system continue to be apparent and are documented in various studies looking into electoral financing, candidate profiles and public official pedigrees.

Systemic graft and corruption remain at fairly high levels. Thirteen years after the EDSA Revolution, a new president’s public speeches would continue to denounce routinely “hoodlums in robes” (those in the judiciary), “hoodlums in uniform” (those in the military and the police) as well as all other plain hoodlums in and out of government service. All would be warned in his inaugural address not to test his presidential resolve to combat graft and corruption. (Almost a year into his own presidency, it appears that some of his own close political aides have been hard of hearing at his inauguration).

One could continue documenting the agitating features of Philippine political history after 1986. One could explore the serious challenges of criminality to public safety (with about 40 percent at least of the people feeling unsafe whether in their own homes or in the streets of their own neighborhood), or of dissident groups defying public order (the CPP-NPA-NDF communist threat and the Muslim Islamic Liberation Front) or the politicization of purportedly neutral government institutions such as the judiciary and the military, among others.

All these are painful images of a current reality emphatically belying any claim that a political or socioeconomic revolution was indeed precipitated at EDSA. Yet one more image remains and perhaps it is this one that might serve to sufficiently outrage another critical mass and another generation of Filipinos toward a much more authentic revolutionary awakening.

Criminals do appear to have a compulsion to return to the scene of their crimes. The national plunderers are back in business, in all the influential sectors of Philippine society, in government, the private sector and even in many of the pseudo-organizations of civil society. Their dramatic presence, their predictable forays into the nation’s patrimony and their subsequent arrogant posturings could re-ignite the public’s fading memories of a previous regime’s brutal political repression and tyrannical rule. A better-organized, better-informed and more truly revolutionary consciousness could be facilitated by the resurgence of these people who treated the Philippines as their private looting grounds for more than two decades. Then, like the devil in Goethe’s Faust, they may yet philosophically pronounce when asked for their identity: “I am he who while ever conspiring to do evil somehow manage to effect good.”

The lessons of 1986 and other earlier possible turning points in Philippine history are relatively unambiguous. Revolts do not necessarily make for revolutionary outcomes, at best on for revolutionary potential. In the case of the 1986 Revolution, that potential was aborted. Marcos was deposed as a political ruler, but the political system which spawned him was not irreversibly destroyed and may even now be resurgent.

The final lesson of EDSA has long been suspected by democratic sympathizers, although there have been few validations of their thesis. A democratic revolution cannot be initiated or sustained by self-serving elites. Only an enlightened, self-serving citizenry can reliably initiate and sustain an enduring democracy. 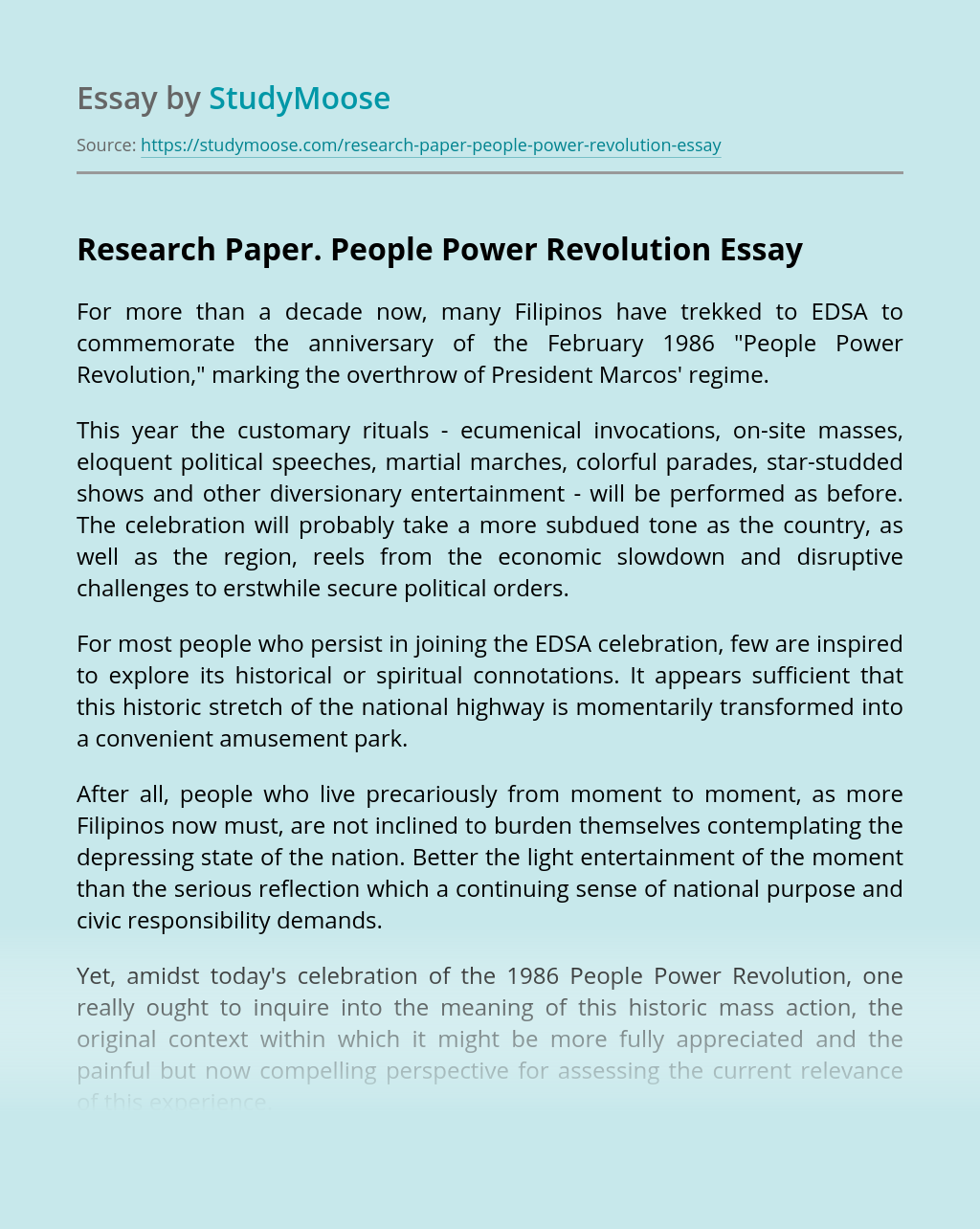