Globally, there are approximately one billion people who have inadequate levels of vitamin D in their blood and this deficiency is found amongst all age groups and ethnicities. ” A deficiency in vitamin D has been linked to several diseases including: common cancers, heart disease, bone diseases, and other chronic illnesses” (Holick & Chen 1). The promotion of protection from the sun in the United States and a substantial amount of other western countries has negatively impacted the amount of sun exposure people are getting even though it’s a easy way to get a natural source of vitamin D.

Don't use plagiarized sources. Get your custom essay on
“ Vitamin D Deficiency The Global Pandemic ”
Get custom paper
NEW! smart matching with writer

Public awareness of this matter must rise, vitamin D food fortification must be hightened, appropriate supplementation could be added to everyday routines, and sensible sun exposure should be encouraged in order to end this pandemic One of the causes of the pandemic is that some people have no idea of the matter to start with and therefore are equally uninformed on available approaches to modifying their vitamin D intake.

For the sake of individual and public health, information regarding this issue must be dispersed. People would most likely would be grateful if they knew that vitamin D intake has an impact on their health and can avoid against diseases like: cancer, osteoporosis, heart disease, multiple sclerosis, autoimmune diseases, diabetes, hypertension, and even fighting against the common flu. This could be possible by contstant local and international news coverage, as well as the production of informational guidance booklets available at locations like hospitals and doctors offices, and informational functions hosted by local health departments.

By simply informing people that the problem exists and including managable adjustments they can make to improve it while lowering their risks for certain diseases, this could highly raise awareness and improve overall health.

The fortification of milk in the 1930s with 100 IU vitamin D2 per eight ounces was effective in eradicating rickets in the United States and Europe (Holick & Chen 1). The process of making foods with vitamin D was first made known and very sufficent in the 1930s, yet was discontinued in several European countries in the 1950s because it was accused for a hypercalcemia outbreak. If European countries along with countries worldwide mandated the fortification of dairy products, this could serve as a essential for the prevention of a vitamin D deficiency. Furthermore, the fortification of additional foods or increase in fortification of already fortified foods could highly improve the achievement of daily Vitamin D intake. A 1999-2000 Nutritional Health and Nutrition Examination Survey highlighted the role of food fortification in reaching the recommended daily intake of Vitamin D as fortified foods were able to provide approximately 65 – 86% of the total daily Vitamin D intake; fortified milk alone contributed 40 – 64% of it ( O’Donnel 3 ). These statistics greatly show the impact that even small adjustments of vitamin D concentration higher than they already are to foods commonly fortified can make on the worldwide deficiency problem.

Though in the United states, “the pharmaceutical form of vitamin D is D2and is available as a capsule containing about 50,000 IU or a D2vitamin that contains 8,000 IU” (Holick & Chen1). If someone has a vitamin D deficiency then higher supplements are the leading form of regimen where physicians will recommend anywhere from 2,000 to 4,000 International Units per day. Supplements are a cost effective way the price is usually under five dollars of acquiring the daily intake of vitamin D, especially for people in northern regions where sun exposure isn’t year round and those with medical conditions in which they cannot undergo sun exposure. The incorporation of such supplements into one’s daily regimen could significantly raise the levels of vitamin D in their blood, highly benefit their overall health, and more importantly lower the risk of developing numerous diseases.

Vitamin D is generally referred to as the “sunshine vitamin” since sun exposure is the simpilest and most natural way for people to get their vitamin D. And actually, only about 10 minutes of mid-day sunlight exposure, while wearing something like a tank top and shorts, are imperative during the summer for producing 1000 International Units of Vitamin D. In western countries and many parts of the United States, this amount of exposure for vitamin D production is the same year round. Even though this method for vitamin D intake may seem very simple for most people, it is highly underappreciated and overlooked by many, most likely because of the promotion for protection against the sun. Advertising to avoid sun exposure is due to increasing skin cancer rates.

Advertisments advise people to use sunscreen with higher SPFs and to wear more clothing to protect against UV radiation. While it is certaintly important to protect the skin by limiting excessive amounts of sun exposure, it too is crucial that people know the benefits of minimal, daily sun exposure to prevent the development of a vitamin D deficiency or any related diseases. In the 1930s, experts discovered that ultraviolet radiation was almost a approved cure for rickets as patients exposed witnessed great progress from the treatment. This is by great deal the most economical approach to preventing a Vitamin D deficiency because it does not require the extensive purchase of supplementation or a great deal of fortified foods.

Vitamin D deficiency is a pandemic and existst in every country. The lack of public awareness of this problem is thought to be a big agent thus being said must immensly be modified so that the population can be informed and start to change their lifestyles. The need of basic food fortification is more essential than ever before, mainly due to the public warnings against sun exposure. All countries should sanction for food fortification and to assist in bettering their community’s health and ending this pandemic. Supplementation is the most effecient way to prevent and treat vitamin D deficiency, therefore the advertisement for it should largely increase. Although not everyone can depend on sun exposure for vitamin D throughout an entire year, it is still the most exceptional method out of all as it is natural and price free. Overall, all of the outlined solutions for defeating and bringing the worldwide deficiency to an end, were feasible and completely possible. If everyone was informed and implemented such strategies and practices into their day to day routines, so many diseases and deaths due to these diseases could be prevailed. 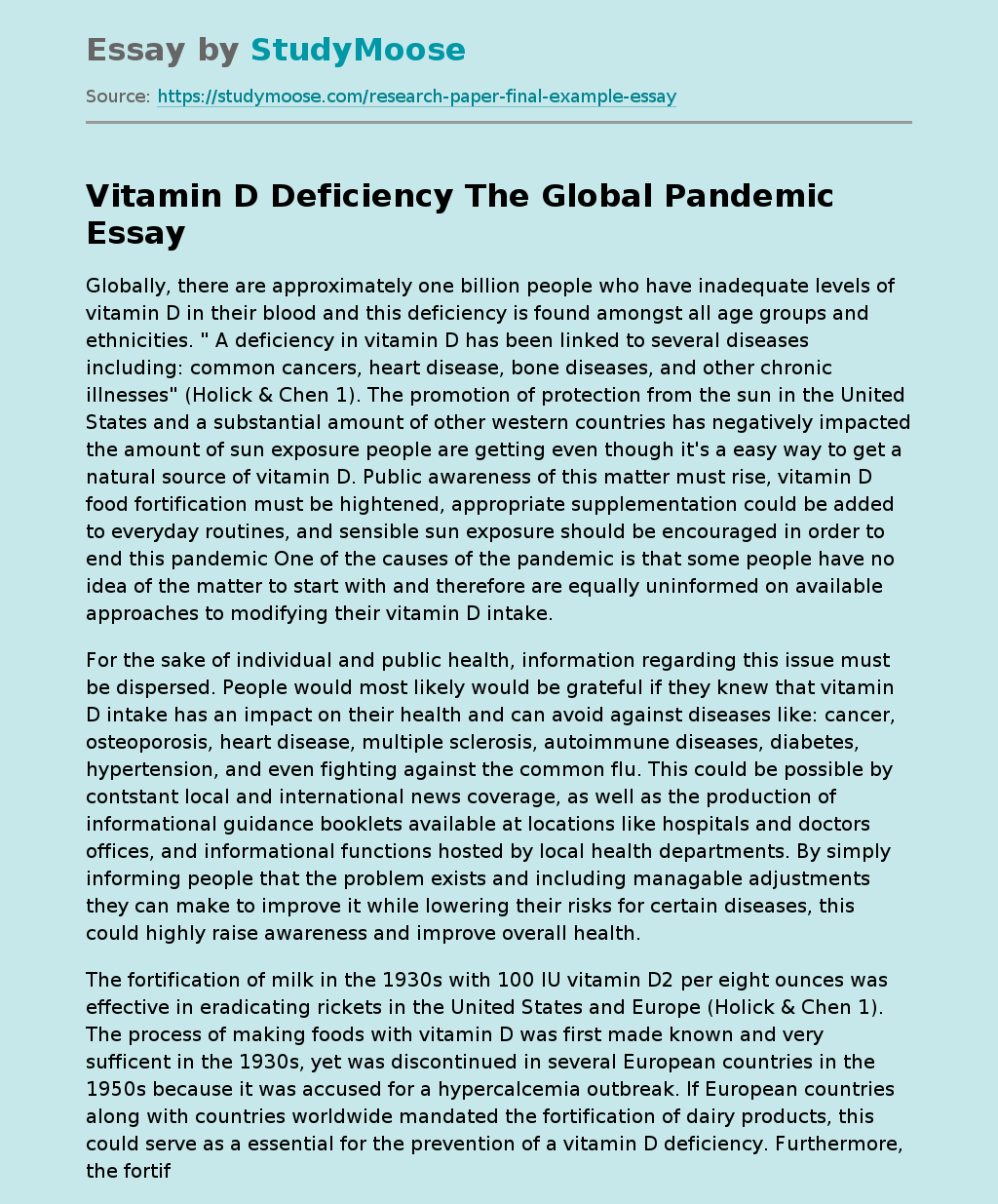