Religious Freedom Up To 1877

“The First Amendment to the U.S. Constitution says that everyone in the United States has the right to practice his or her own religion, or no religion at all” (ACLU). Our highest law is the U.S Constitution which contains some amendments, the first Ten Amendments go by the Bill Of Rights. The Bill Of Rights which protects us from the government being able to take away our speech, protest, assembly, due process, religion and many more, this applies to the people of the United States.

Don't use plagiarized sources. Get your custom essay on
“ Religious Freedom Up To 1877 ”
Get custom paper
NEW! smart matching with writer

Another amendment that helps freedom of religion is the Fourteenth Amendment which was adopted in 1868, this added a provision protecting the rights of individuals from the intrusion of State Law. I believe our country founders back then believed the best way to protect our citizen’s religious liberty was to keep the government out of religion, which is why they separated church and state which ended up becoming revolutionary. In this paper, I’m going to be going through different points in time to discuss some events and people that were involved with Religious Freedom leading up to 1877 like the Colonial Era, The First Amendment, Roger Williams, The Great Awakening, Thomas Jefferson, Toleration Acts, James Madison, and Fourteenth Amendment.

I believe people should have the ability to express any religion they choose as long as they have no malicious intent.

A historical period in which religious liberty was brought to the forefront was when colonists from Great Britain moved into America where they were located in Massachusetts, Rhode Island, Connecticut, and Virginia.

Most of these English Colonies ended up creating churches that were backed up by the government. So citizens had to support the colony’s church by paying a tax, for some Colonies church was mandatory to attend. Rhode Island was founded by Roger Williams who will become an influential leader in Religious Colonies and was the only Colony that became an outpost for Religious Freedom. Next, the Pilgrims and Puritans made an appearance in New England in the early 1600s after receiving religious persecution in England, which led to a Puritan names John Winthrop abandons England to looking for freedom to worship and sets up the Massachusetts Bay Colony which didn’t tolerate any other religious views. Catholics, Quakers and other non-Puritans were not allowed to enter the Colony. Later on, Roger Williams was banned from Massachusetts for his skeptical views about the church and civil power mixing. This led to Williams stating that “the colonies for a separation of religion and government: demanded that civil governments not be permitted to make any determination about the religious beliefs of their subjects” (FHAO) and the creation of a providence colony which even extended to Catholics, Jews, Muslims, and Aeithiest. Williams believed that no state had the authority to mess with the first Ten Commandments.

The only Catholic English Colony, Maryland was intended to provide sanctum to Catholics and gave them full civil rights. So in order to help Catholics Maryland implements the Toleration Acts which declares that “no person or persons… shall from henceforth be in any ways troubled, molested or discountenanced for or in respect of his or her religion nor in the free exercise thereof” (TAH) and those who deny Jesus Christ can end up being punished by death or by taking their land. Now this protection for Catholics did not last long as the Toleration Acts were repealed in 1692. Next, the Great Awakening brought a variety of ideas and doctrine some of them are all people are sinners, everyone can be forgiven by God if they pray, and every person has a direct connection to the Lord. According to Martin Kelly “The Great Awakening arose at a time when people in Europe and the American colonies were questioning the role of the individual in religion and society”(kelly). This leads me to believe that The Great Awakening was a period in time where intense religious revivalism was spreading around the colonies.

In Addition, a man named Thomas Jefferson who is a strong believer in religious freedom, Thomas Jefferson drafted a Virginia bill assuring Religious Freedom for all Virginians that have a religion even including those that don’t have a religion. Jefferson supports and encourages the separation of religion and government but the bill ended up not passing into law. But I believe this sets the idea for the future generation about freedom of religion for others. Moving on to the war between Great Britain and the American Colonies there were a number of reasons why this war started some was the Stamp Act of 1765, the Townshend Acts of 1767, the Tea Act of 1773, the Boston Massacre, the Boston Tea Party and many more, the war ended with thirteen colonies selecting their political independence. Religion was only mentioned once in the United States Constitution. The Constitution bans all religious tests as a qualification for public office, this allowed people of no faith and people with faith to work for the United States public offices. Meanwhile, James Madison who was the fourth president of the United States and one of our founding fathers argued against the support of Christian Religion. Madison would go on to draft the Bill Of Rights which would bestow constitutional protection for only a number of liberties like the right to assemble, freedom of speech and press, and freedom of religion. “ The First Amendment, along with the rest of the Bill of Rights, was submitted to the states for ratification on September 25, 1789, and adopted on December 15, 1791” (History.org). This allowed separation of state and church that outlawed the federal government from creating any new law that in most cases interfered with a person’s religious practices and beliefs. Another amendment that helped with Religious Freedom is the Fourteen Amendment which extended Religious Freedom by suppressing the states from establishing laws that would prevent anyone’s religion.

In Conclusion, the people should have the ability to express any religion they choose as long as they have no malicious intent. Freedom Of Religion is needed to protects the people and to prevent the government from forcing you into believing something that you don’t believe, Freedom of Religion has had a huge impact on my life. I’m glad that I’m able to choose what I want to believe in and what religion I want to be in. I like the idea of people not being able to tell me that I can’t believe in something or I have to believe in something because everyone else does. Although the fact is that the bias of religion is still present in today’s world, hopefully in the future we will be able to eliminate religious discrimination. 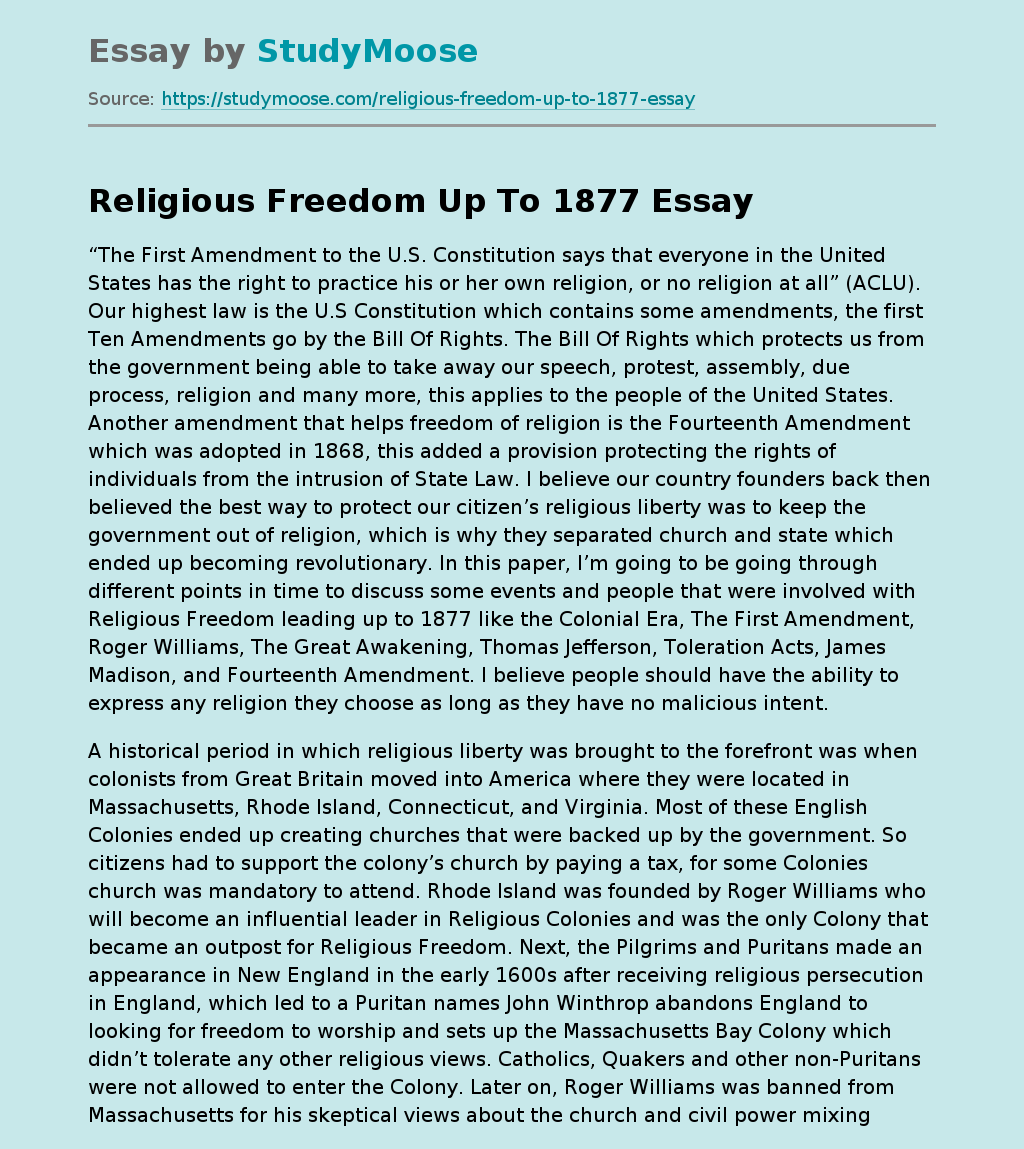